Pancreatic ductal adenocarcinoma (PDAC) is one of the main causes of cancer-related death in developed countries and is considered to be an incurable and rapidly lethal disease [1]. The prognosis of patients after complete resection is poor, and >50% of patients develop tumor recurrence, with an estimated 5 year survival of only 20% [2]. Recent reports have suggested that adjuvant chemotherapy following curative surgery significantly prolonged the overall survival time after surgery, and this approach is being adopted as a standard strategy [3, 4]. The majority of PDACs are sensitive to gemcitabine at first [5], and gemcitabine-based chemotherapy has formed the core of adjuvant therapy for PDAC [3]. Unfortunately, gemcitabine is only modestly effective against tumor recurrence and extends overall survival (OS) by approximately 6 months. PDAC will eventually develop resistance to gemcitabine after prolonged exposure [6]. One of the most important factors affecting the poor prognosis of PDAC is considered to be its high resistance to most of the existing chemotherapeutic regimens.

MicroRNAs (miRNAs) are small non-coding RNAs that interact with mRNA and serve as negative regulators of gene expression by targeting the 3′-UTR mRNA region of the target mRNAs, inhibiting their translation or leading to their degradation [7, 8]. miRNAs have been found to play pivotal roles in PDAC development and progression by affecting multiple cellular processes, such as cell apoptosis, survival and chemotherapeutic resistance of PDAC [9, 10]. MiR-15a [11], miR-21 [12, 13], miR-34 [14], members of the miR-200 family [12, 15], miR-214 [11], miR-221 [16], members of the let7 family [15], and miR-320c [17] have been reported to play roles in gemcitabine chemoresistance in pancreatic cancer. Clinical studies have demonstrated the efficacy of miRNA as a therapeutic tool in the management of PDAC [18, 19]. Studies in vitro and in vivo have demonstrated the tremendous efficacy of miRNA as a therapeutic tool in the chemoresistance of PDAC to gemcitabine by regulating chemoresistance-related miRNAs. Down-regulation of miR-21 [20] and miR-125a [21] enhanced gemcitabine sensitivity in human pancreatic cancer cells. Up-regulation of miR-33a [22, 23], miRNA-181b [24] and miR-211 [25] increased the sensitivity of PDAC cells to gemcitabine in vitro and in nude mice.

In this study, we demonstrated that low miR-410-3p expression was associated with gemcitabine resistance in HPCx tumors and PDAC cells as well as poor prognosis in PDAC patients. Moreover, we found that up-regulated expression of miR-410-3p improved the chemoresistance of PDAC by targeting the 3′-UTR sequences of HMGB1 and inhibiting HMGB1-mediated autophagy signaling. As a result, this study provides a potential new strategy to enhance chemosensitivity of PDAC to gemcitabine.

To identify potential miRNAs related to gemcitabine resistance in pancreatic cancer, we performed a miRNA microarray analysis in human pancreatic cancer xenograft (HPCx) subpopulations resistant to gemcitabine treatment. When the HPCx tumor volumes reached >80 mm3, mice were treated with gemcitabine, and the nodules were removed after 3 weeks. HPCx tumors from untreated mice were removed to serve as controls. Figure 1A shows that, among the 43 miRNAs whose expression levels were altered more than 1.5-fold, 13 candidate miRNAs were down-regulated in HPCx tumor tissues from gemcitabine-treated mice compared to their expression in controls tissues. Real-time PCR confirmed that miR-34-5p (Figure 1B), miR-410-3p (Figure 1C), miR-449-5p (Figure 1D) and miR-203 (Figure 1E) were down-regulated in HPCx tumor tissues from gemcitabine-treated mice (P < 0.05). 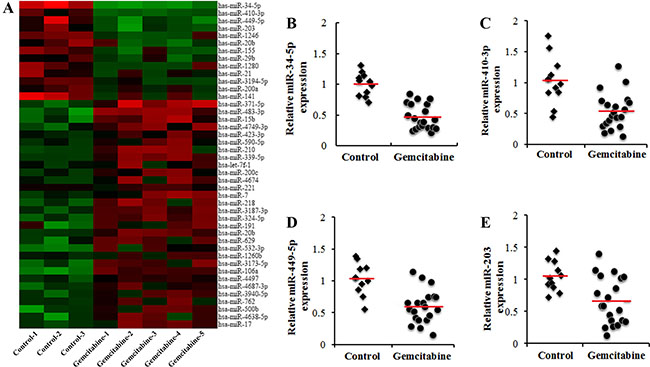 miR-410-3p promotes the sensitivity of human PDAC to gemcitabine 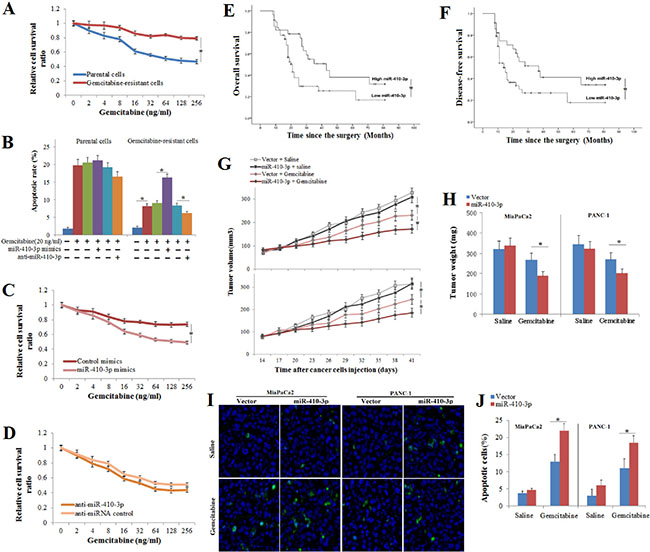 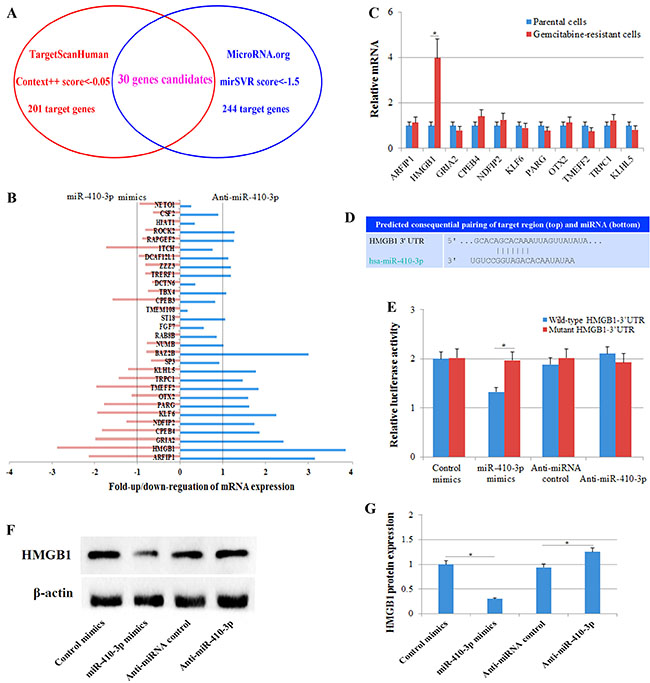 Figure 3: Predicting and validating the gene targets of miR-410-3p. (A) Online programs (TargetScanHuman 7.1 and MicroRNA.org) predicted putative gemcitabine resistance-related target genes of miR-410-3p. TargetScanHuman identified 201 target genes (Context++ score < –0.05), and MicroRNA.org identified 244 target genes (mirSVR score < –1.5). Thirty gene candidates were designated putative target genes of miR-410-3p by both programs. (B) The expression of the 30 putative target genes was determined by real-time PCR in human PDAC cells transfected with miR-410-3p mimics or anti-miR-410-3p. (C) The expression of 11 potential targets (ARFIP1, HMGB1, GRIA2, CPEB4, NDFIP2, KLF6, PARG, OTX2, TMEFF2, TRPC1 and KLHL5) was determined by real-time PCR in gemcitabine-resistant and parental clones of human PDAC cells. (D) Predicted miR-410-3p binding sites in the 3′-UTR of HMGB1. (E) Luciferase reporter assay with co-transfection of wild-type or mutant HMGB1 and miR-410-3p mimics, anti-miR-410-3p, mimics-control or anti-miRNA-control in human PDAC cells. (F, G) Western blot analysis of HMGB1 expression in gemcitabine-resistant clones of human PDAC cells transfected with miR-410-3p mimics, anti-miR-410-3p, mimics-control or anti-miRNA-control. All of the treatments in this figure were carried out in triplicate, and the results are displayed as the means ± SD. *P < 0.05. 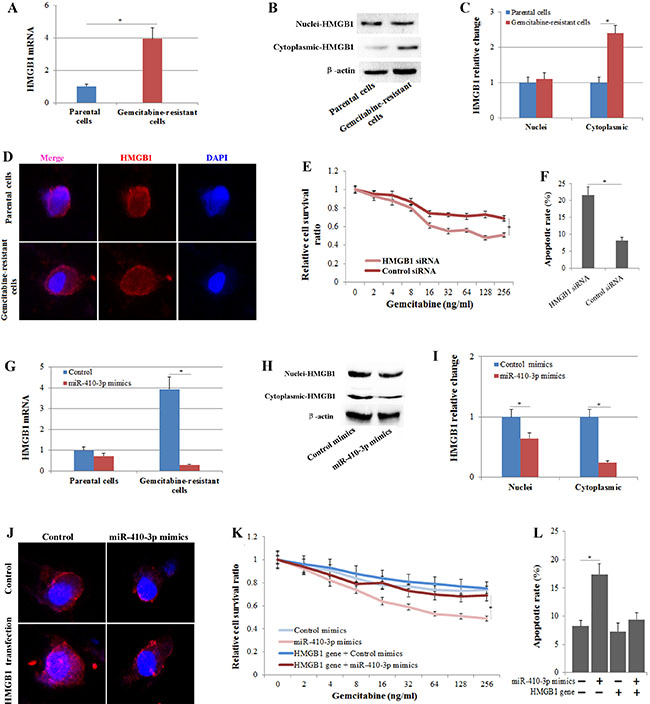 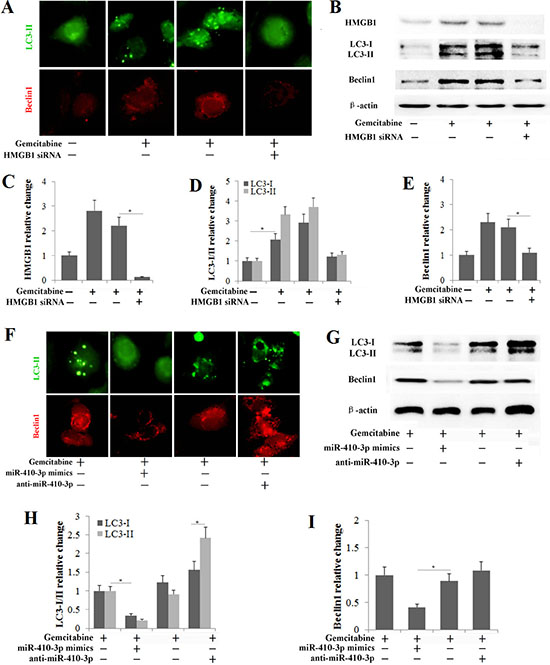 Chemotherapy is the most common treatment option for many cancers, including pancreatic cancer. However, it offers little therapeutic value in many cases due to the rapid development of chemoresistance. Recently, several studies have indicated that some miRNAs [34], such as miR-21 [35], miR-155 [36], miR-320c [18] and miR-1246 [37], have been involved in the induction of chemoresistance in PDAC. The identification of key miRNA networks in pancreatic cancer will provide long-awaited diagnostic, therapeutic, and prognostic tools for early detection, better treatment options, extended life expectancy, and better quality of life in PDAC patients [38]. Thus, we identified potential miRNAs related to gemcitabine resistance in a human pancreatic cancer xenograft (HPCx) with miRNA microarray analysis and showed that miR-34-5p, miR-410-3p, miR-449-5p and miR-203 were significantly down-regulated in HPCx tumor tissues from gemcitabine-treated mice. In addition, we found that low miR-410-3p expression correlated with gemcitabine resistance and poorer prognosis in human PDAC.

A better understanding of disease pathogenesis mechanisms will facilitate the early detection and development of effective treatments. We used online programs to search for the potential targets of miR-410-3p and found that HMGB1 was significantly affected by both up- and down-regulation of miR-410-3p expression and expressed in gemcitabine-resistant PDAC cells. Moreover, a luciferase assay confirmed that miR-410-3p can directly target the 3′-UTR sequences of HMGB1. Consistent with the dual luciferase assay, ChIP analysis also observed the direct interaction between miR-410-3p and HMGB1 (Supplementary Figure 3A). In addition, up/down-regulation of miR-410-3p expression by transfection with miR-410-3p mimics or anti-miR-410-3p did not affect the expression of HMGB2, HMGB3 or HMGB4 in human PDAC cells (Supplementary Figure 3B). HMGB1, known primarily as a regulator of autophagy, is expressed in various normal cells and has also been confirmed to be involved in cancer development by interfering with several signaling pathways [44, 45]. Recently, studies have suggested that HMGB1 binds to the autophagy regulator Beclin1 and regulates the formation of the Beclin1-PI3KC3 complex that facilitates autophagic progression [31]. Induction of autophagy by HMGB1 is important for tumor development and a novel target for cancer therapy [31, 46]. Autophagy is a natural destructive mechanism of cells and is characterized as a degrading and recycling of cellular components for new cell formation [27]. Tumor cells use cytoprotective autophagy as a defense against apoptosis cell death, which in turn contributes to the development of chemoresistance. There is mounting evidence that autophagy contributes to increased gemcitabine resistance in PDAC cancer [28, 47, 48].

Some studies have also reported that miRNAs can modulate chemotherapy via autophagy [49, 50]. MicroRNA-410 enhances chemosensitivity via regulation of autophagy-related genes [51]. However, the regulatory mechanisms by which miR-410-3p effects chemoresistance of PDAC to gemcitabine remain largely unknown. The present study revealed that miR-410-3p attenuated gemcitabine resistance in PDAC cancer cells by targeting the 3′UTR of HMGB1. HMGB1-mediated autophagy during chemotherapy in PDAC cells was further confirmed by autophagy-related biomarker assays. Autophagy was inhibited after transfection of PDAC cells with HMGB1 siRNA or miR-410-3p mimics during chemotherapy. Further investigations indicated that cell viability was significantly decreased and apoptosis was significantly increased in the gemcitabine-treated PDAC cells transfected with miR-410-3p mimics. Conversely, miR-410-3p silencing was able to effectively induce autophagic activation, promote cell growth and suppress cell apoptosis in the gemcitabine-treated PDAC cells. Taken together, our results of the present study provided novel evidence suggesting that miR-410-3p attenuates chemoresistance of PDAC to gemcitabine by inhibiting HMGB1-induced autophagy.

In summary, by using miRNA microarray and RT-PCR analysis, we demonstrated that miR-410-3p was down-regulated in HPCx tumor tissues from gemcitabine-treated mice and found that low miR-410-3p expression was associated with gemcitabine resistance in HPCx tumors and PDAC cells as well as poor prognosis in PDAC patients. On the other hand, both in vivo and in vitro, our study demonstrated that overexpression of miR-410-3p attenuated gemcitabine resistance of PDAC by targeting the 3′-UTR sequences of HMGB1 and inhibiting HMGB1-mediated autophagy. Together, our studies suggest that miR-410-3p expression may be a useful indicator of the potential for chemoresistance to gemcitabine and provide a potential new therapeutic target for chemoresistance in PDAC.

Cells were transfected with miR-410-3p mimics or miRNA scrambled controls at a final concentration of 20 nM using Oligofectamine (Invitrogen), or the antisense oligonucleotide inhibitor of hsa-miR-155 (anti-miR-410-3p) or their scrambled oligonucleotides (anti-miRNA control) at a final concentration of 200 nM using the DharmaFECT3 transfection reagent (Dharmacon), or with the empty vector pEGFP-N1 or the human pEGFP-N1-HMGB1 vector using the ExGen-500 transfection reagent (Fermentas, Germany), or with 100 nmol/l human HMGB1 small interfering (si)RNA or a control siRNA (Santa Cruz) using RNAi MAX transfection reagent. In apoptosis experiments, the PDAC cells treated with 50 ng/ml gemcitabine or PBS for 72 h before flow cytometry assay.

This study was approved by the Animal Experiments Committee, West China Hospital, Sichuan University. It was performed in accordance with the National Institutes of Health guidelines for the use of experimental animals. Six-week-old female nude mice were purchased from Dossy Biological Technology Co. Ltd. (Chengdu, China), and maintained in a specific pathogen-free environment. For the human pancreatic cancer xenografts (HPCx), MiaPaCa2 or PANC-1 cells (1 × 106) were subcutaneously transplanted into the interscapular fat pad of female nude mice under anesthesia. The mice were administered gemcitabine (125 mg/kg) intraperitoneally three times on days 17, 24, and 31 after xenograft transplantation. Subcutaneous tumor volume was calculated as follows: (greatest diameter) × (shortest diameter)2 × 0.5. Gemcitabine therapy was initiated when the tumor volume was 80~100 mm3. Mice were euthanized on day 41. The tumor tissue sections were stained with hematoxylin and eosin; alternatively, a TUNEL assay was performed on the sections using an in situ cell death detection kit (Roche Diagnostics). MicroRNAs were identified by miRNA microarray analysis (Agilent Technologies) in tumor tissues from treated mice with gemcitabine relative to from controls mice.

86 PDAC in patients who received gemcitabine chemotherapy after radical surgical resection were collected between July 2010 and March 2014 at the West China Hospital of Sichuan University. Gemcitabine chemotherapy was started within 8 weeks postresection. Gemcitabine (intravenous infusion of 1000 mg/m2) was given on days 1, 8, and 15 of each cycle, to be repeated every 4 weeks. This lasted for 6 months. Written informed consent was obtained from all patients involved, and the PDAC diagnosis was based on hematoxylin eosin and immunohistochemical staining from tumor tissue sections. None of the patients received any other preoperative and postoperative chemotherapy or radiotherapy. The clinical data were collected from each patient, including age, gender, location, tumor size and lymph node metastasis, degree of differentiation, pT category, the presence of metastatic disease, and survival. Our study received approval from Institutional Review Board of Sichuan University West China Hospital. Patients were followed up till the end of April 2017, either in the form of telephonic conversation or as outpatient clinic appointment. Real-time PCR was used to detect the expression levels of miR-410-3p in clinical PDAC samples.

The results presented are the average of at least three experiments, each performed in triplicate with standard errors. Kruskal-Wallis H test and Chi-square test were used to analyse the expression rate in all groups. A Kaplan-Meier survival analysis was performed to assess the OS and DFS of the patients. One-way analysis of variance (ANOVA) was used to analyze the differences between groups. Statistical analyses were conducted by SPSS 20.0, and a P-value less than 0.05 was considered to be statistically significant.

No potential conflicts of interest relevant to this article were reported.