Prognostic relevance of TTF-1 expression in stage I adenocarcinoma

Lung cancer remains the leading cause of cancer death worldwide in recent years [1]. Lung adenocarcinoma, accounting for nearly 50% of all lung cancer, is the most common histologic subtype and the morbidity rate is increasing year by year [2]. Prognosis of lung adenocarcinoma has raised concern by the International Association for the Study of Lung Cancer (IASLC)/American Thoracic Society (ATS)/European Respiratory Society (ERS) in 2011 [3].

Table 2: Univariable analyses for RFS and OS in our study

Table 3: Multivariable analyses for RFS and OS in our study 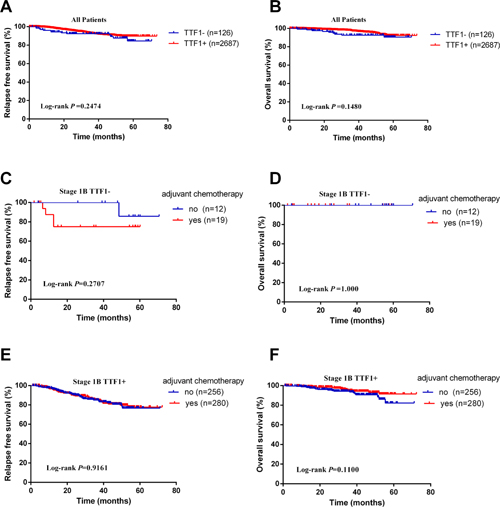 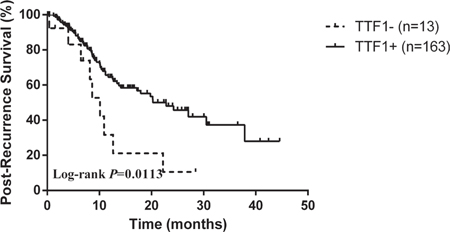 As IASLC/ATS/ERS emphasized in the new classification in 2011, immunohistochemical (including TTF-1), combined with histochemical and molecular studies were suggested to determine the specific type of lung cancer. Furthermore, TTF-1, acted as a pneumocyte marker, was considered to be the single best marker for lung adenocarcinoma and had the added value to distinguish primary lung cancer [3, 5, 17, 18]. In our study, we reviewed 2813 stage I patients including 126 adenocarcinomas with TTF-1+ and 2687 adenocarcinomas with TTF-1− to have a comprehensive understanding of the clinicopathologic features, patterns of recurrence, chemotherapeutic efficacy and the prognosis associated with TTF-1 expression. Zhang and his colleagues reported that patients with TTF-1− were inclined to be male smokers with larger tumor size and more advanced disease stage. Besides, patients with TTF-1− tended to have multiple metastases when they experienced a relapse [16]. Nevertheless, we found that in early stage adenocarcinomas, the characteristics between TTF-1+ group and TTF-1− group were similar, even the patterns of recurrence (p = 0.771). The reason may be because the more advanced disease stage was, the less TTF-1 would be expressed, and all the patients in our study were stage I patients while more patients with advanced stage in theirs.

Numerous studies have investigated the relationship between TTF-1 expression and prognosis, most of which demonstrated that positive TTF-1 expression was associated with better survival [11, 13, 21–23]. But in our study, there was no difference between TTF-1− group and TTF-1+ group in RFS (Log-rank p = 0.2474) and OS (Log-rank p = 0.1480), which was in accordance with Pelosi [24]. Moreover, we further investigated chemotherapeutic efficacy of stage IB adenocarcinomas between TTF-1− group and TTF-1+ group. Whether received adjuvant chemotherapy made no difference to RFS and OS (RFS: Log-rank p = 0.2707; OS: Log-rank p = 1.000, Figure 1C and 1D), as was the case in stage IB adenocarcinomas with TTF-1+ (RFS: Log-rank p = 0.9161; OS: Log-rank p = 0.1100, Figure 1E and 1F). The reason was as follows: it is generally known that on the promise of complete resection, the later pathological stage is, the poorer prognosis would be. All the patients in our study was stage I adenocarcinomas while more advanced disease made up the majority in other studies.

In our series, TTF-1 was not recognized as an independent prognostic factor, neither in univariable analysis nor in multivariable analysis. Disease stage may still be the major reason. Within the follow-up period, a total of 13 (10.3%) TTF-1− patients and 163 (6.1%) TTF-1+ patients experienced a relapse. There was significant difference in post-recurrence survival (PRS) for TTF-1− patients compared with those TTF-1+ patients (Log-rank p = 0.0113, Figure 2). The results was basically in line with zhang and his colleagues [16], who also found pathologic stage, TTF-1 expression and the use of EGFR TKIs as independent predictors of post-recurrence survival.

There are several limitations in our study. First, this study is not a randomized prospective study, selection bias may exist. Second, in the subset of stage IB TTF-1− patients, the chemotherapeutic efficacy could not be shown well due to the small amount of sample size.

From Jan. 2010 to Aug. 2015, we consecutively collected resected stage I pulmonary tumors in the Department of Thoracic Surgery, Shanghai Chest hospital. Two pathologists (J.K.Z and J.C.S.) confirmed the diagnosis by H&E staining and immunohistochemistry biomarkers. To exclude tumor metastasis, all the patients were under routine preoperative examinations including computed tomography (CT) or enhanced thoracic computed tomography, abdominal ultrasonography, brain magnetic resonance imaging (MRI) and bone scan. Furthermore, suspicious lymph node metastasis or distant metastasis which could not be excluded by routine preoperative examinations, endobronchial ultrasound-guided transbronchial needle aspiration (EBUS-TBNA) or positron emission tomography (PET)-CT scan was recommended. In our study, the inclusion criteria included:(1) patients with lung adenocarcinoma underwent R0 resection; (2) the status of TTF-1 (positive or negative) was available by immunohistochemistry test; (3) patients with complete follow-up records; (4) those with metastatic lung adenocarcinoma were excluded. Of these, we identified 2813 stage I adenocarcinomas with available clinicopathologic data and postoperative follow-up records.

Signed informed consents of patients were obtained and this study was approved by our institutional review board. All the corresponding clinicopathologic data including sex, age, smoking history, pathologic T stage, pathologic disease stage (according to AJCC TNM staging system 7th edition [17], surgical procedure, subtypes and adjuvant chemotherapy were investigated.

This study was conducted in line with the Helsinki Declaration, and was approved by the Institutional Review Board of the Shanghai Chest Hospital. Written informed consent was obtained from each patient. The experimental protocol of this study was performed strictly in accordance to the guidelines.