Differential expression of HLA-G has been observed among cancer types and tumors from individuals with the same type of cancer; however, its clinical significance is rather limited. In this study, expression and predictive relevance of HLA-G expression in 457 primary colorectal cancer (CRC, ncolon = 232, nrectal = 225) patients was investigated. Data showed 70.7% (323/457) of the CRC were HLA-G expression when the above 5% (HLA-GLow) was considered as positive, which wasn’t associated with patient survival (p = 0.109). However, HLA-G expression above 55% (HLA-GHigh) was associated with a worse prognosis of CRC patients (p = 0.042). Furthermore, a shorter survival was found for the female (p = 0.042) and elder (p = 0.037) patients whose HLA-G expression was above HLA-GLow level. HLA-G expression above HLA-GHigh level showed a worse prognosis for female (p = 0.013), elder (p = 0.023), colon cancer (p = 0.016), advanced tumor burden (T3+4, p = 0.018), regional lymph node status (N1+2, p = 0.044), and advanced clinical stage patients (AJCC III+IV, p = 0.037). In conclusion, our results demonstrated for the first time that combination of differential lesion HLA-G expression notably improved the value of traditional survival prediction for CRC patients.

Colorectal cancer (CRC) occurs in an estimated 376,300 new cases and 191,000 deaths in 2015 in China [1]. Tumor progression is dictated by the intimately continuous interaction between malignant cells and the tumor microenvironment such as immune effector molecules and immune regulatory factors, and infiltration of various immune cells [2, 3]. Unfortunately, tumor cells have developed various strategies to avoid recognition and destruction by the host immune milieus, and the resistant variants eventually results in cancer [4].

The immune suppressive molecule human leukocyte antigen G (HLA-G), is rarely observed in normal adult tissues. However, it is found frequently neoexpressed in most tumor cells as cell membrane-bound or soluble forms [5]. Amounts of in vitro and in vivo evidence showed HLA-G could directly interact with its receptors expressed on almost all types of immune cells or by the pathway of “trogocytosis”, revealing a broad immune inhibiting function on both innate and adaptive immune responses [6]. In clinical settings and animal models, earlier studies have demonstrated the aberrant neoexpressed HLA-G in various types of cancers was related to advanced tumor grade, more aggressive behavior and worse disease outcome [7]. 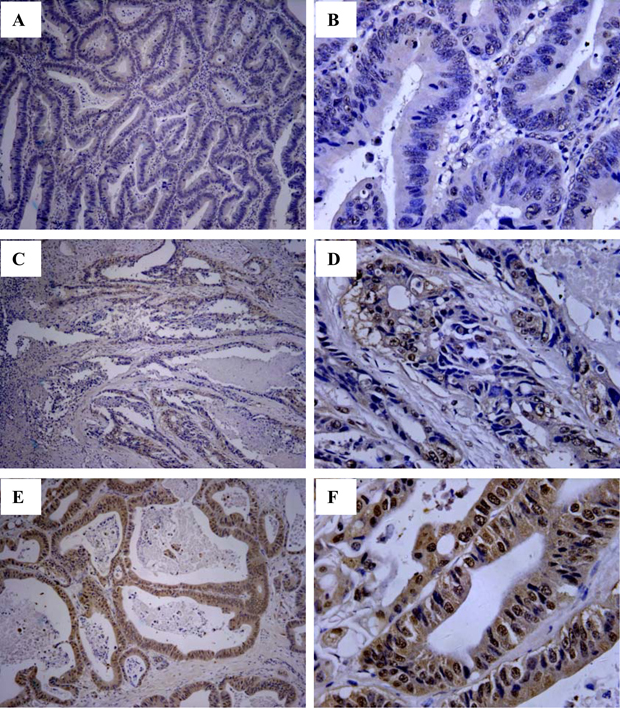 Figure 1: Immunohistochemistry analysis of HLA-G expression in primary CRC lesions. Representative staining of negative (A and B), and positive expression (C and D; E and F) of HLA-G in CRC lesions. Original magnification: A, C, E (100×) and B, D, F (400×).

*Comparison of HLA-G expression status between or among each variable using the Pearson chi-square test. TNM, lymph-node-metastasis and stage according to the TNM classification.

Association between and HLA-G expression and clinical parameters

Furthermore, we analyzed the prognostic significance of HLA-G status with stratification of clinical parameters in CRC patients. Briefly, The tumor histological type was stratified to colon and rectal carcinoma, patient sex to male and female, age to below and above the median age (66 years), categories T to T1, T2,T3 and T4; N to N0, N1 and N2; M status to M0 and M1, and clinical stage to I, II, III and IV, respectively. 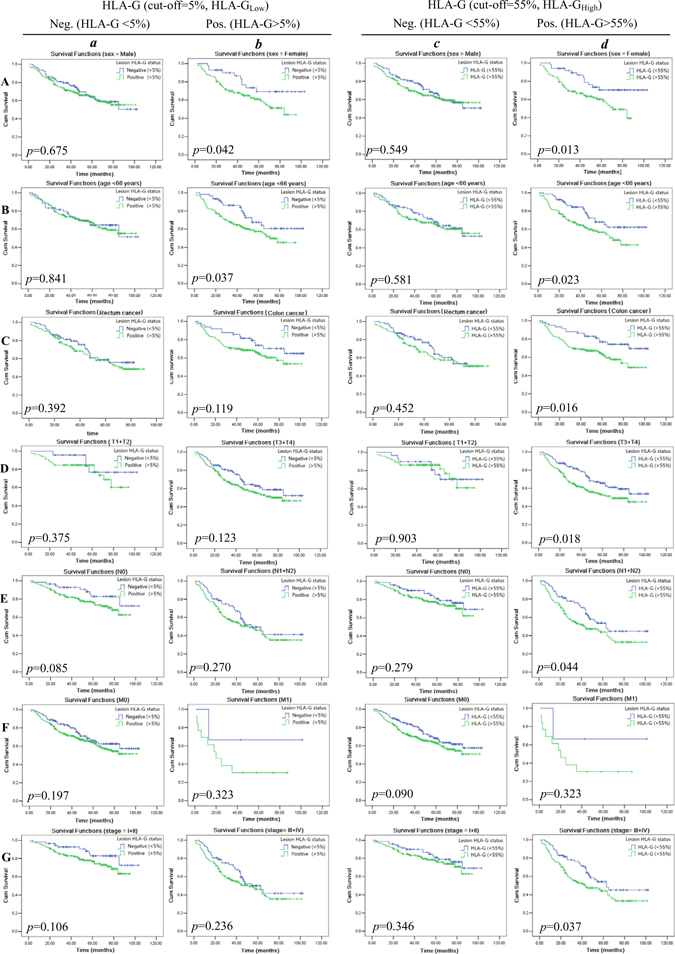 In some cancers, patients within the same TNM stage but their clinical outcomes varied significantly, such as rapid disease progression and cancer-related death with early stage; however, advanced stage cancer can remain stable for years in some patients is often seen [9]. The major reason for the limited predictive power of the traditional staging system is that relies only on the tumor cell characteristics but ignores the effects of the host immune response against the cancers [10]. Indeed, increasing evidence has documented host immune contexture in tumor microenvironment play a critical role in the prediction of prognosis, such as the prognostic value of CD3+, CD8+ and CD45RO+ T cell infiltration in CRCs [11, 12].

Among various factors of host immune contexture in tumor immunology, induction of an immunotolerant HLA-G expression by tumor cells has been observed in numerous tumoral tissues [13]. HLA-G have multiple immune inhibitory effects such as impairing T cell functions by inhibiting of proliferation and cytotoxicity, induction of apoptosis and expansion of regulatory T cells [5]. Moreover, HLA-G expression was found inversely related to the frequency of intratumoral lymphocyte infiltration such as CD8+ T cells or the numbers of peripheral activated T cells (CD8+CD28+ T cells) [14, 15]. Previous studies showed that tumor HLA-G expression was associated with advanced stage or worse clinical outcome and its potential as a prognostic biomarker has been intensively investigated [5]. In CRC patients, Guo et al. [16] evidenced HLA-G was significantly related to the overall survival of CRC patients and it could be an independent prognosticator, similar findings were obtained in a study by Ye et al. [17]. Recently, Kuppen and colleagues [18, 19] found that absence of HLA-G expression indicated a better survival for colon cancer patients and weak expression of HLA-G revealed a worse survival in rectal cancer patients.

Our findings in the current study revealed that different proportion of HLA-G expression in CRC lesions is of significance to the patient survival or prognosis. Analogously, in our recent study, patients with higher levels of peripheral sHLA-G had a significantly worse survival than those with lower levels, and sHLA-G was considered as an independent prognostic factor for CRC patients. Moreover, with stratification of clinical parameters in survival by sHLA-Glow and sHLA-Ghigh, could improve the prognostic power by traditional prognosticators in CRC patients [8]. Our previous in vitro studies had reported that inhibition of NK cytolysis is dependent on the proportion of HLA-G expression. In these studies, data showed that the power of HLA-G in NK cell cytotoxicity was dependent on the level of both HLA-G1 and HLA-G5 expression, and HLA-G1 and HLA-G5 have an additive effect on the NK cell cytolysis suppression [20]. Importantly, a significant inhibition would be reached when the HLA-G expression was more than 60% [21]. Thus, it’s reasonable to speculate that the different proportion of HLA-G expression in tumor lesions could influence disease progression and clinical outcome.

Degree of HLA-G expression could be influenced by multiple factors and mechanisms are complex. HLA-G genetic variation such as polymorphisms in 5′upstream regulatory region and 3′untranslated regions affects the affinity of targeted gene for transcriptional or post-transcriptional factors [23], epigenetic pathways through DNA methylation and histone modifications [24], post-transcriptional mechanisms by and microRNAs [25], as well as environmental factors including various cytokines, growth factors and hormones [26]. However, mechanisms underlying the individual or tumor-specific expression of HLA-G are required to be explored. Moreover, different proportion of lesion HLA-G expression has been found between different cancer types, between tumors from individuals with the same type of cancer, and even between the different intra-tumor areas within a single sample. In this context, Rouas-Freiss et al. recently reported that HLA-G and other immune molecules such as PD1/PDL1,ILT2/4 were heterogeneous expressed in the various areas of the same tumor [27]. These findings further highlights more detail and comprehensive evaluation of the intra- and inter- heterogeneity of HLA-G expression is necessary for explore the clinical significance the HLA-G in tumor biology.

Finally, our data showed that HLA-GHigh status was powerful in affecting the patient survival when clinical parameter was stratified. Among female patients, the elder patients, colon carcinoma patients, stage of T3+4, N1+2, and stage III+IV whose HLA-G expression above the cut-off 55% (HLA-GHigh) have dramatically poor survival than those with lower HLA-G expression. In serous ovarian carcinoma, a study by Andersson et al. [14] revealed that HLA-G expression was correlated to a significant worse prognosis in patients with the genotype HLA-A*02. These data indicated that HLA-G expression status together with other clinical parameters, tumor microenvironment factors is possible to discriminate subpopulations and identify patients with even worse prognosis.

Patient data including age (median: 66 years; range:26 years-90 years), gender (nmale = 268; nfemale = 189), date of initial diagnosis and surgical operation, TNM status including size and extent of primary tumor (T), regional lymph node status (N) and distant metastases (M), and clinical disease stage were documented. The clinical stage classification follows the 7th TNM staging system by UICC and the AJCC [28]. All specimens were pathologically confirmed. All samples were anonymously analyzed in accordance with the Declaration of Helsinki. The study protocol was approved by the Ethical Board of the Taizhou Hospital of Zhejiang Province and a written informed consent was obtained from all patients.

SPSS 13.0 software (SPSS, Inc., Chicago, IL, USA) was used for statistical analysis. Categorical data were analyzed with Pearson chi-square test. Kaplan–Meier and log-rank test was performed for survival analysis. Relationship between the survival and variables were evaluated with the Cox regression method. Significant difference was considered as p < 0.05 (two-tailed).

This work was supported by grants from National Natural Science Foundation of China (31370920, 81372247), Science and Technology Bureau of Zhejiang Province (2013C33112, 2016C33231) and by Zhejiang Provincial program for the cultivation of high-level innovative health talents.

The authors have declared no financial/commercial conflicts of interest.

10. Kirilovsky A, Marliot F, El Sissy C, Haicheur N, Galon J, Pagès F. Rational bases for the use of the Immunoscore in routine clinical settings as a prognostic and predictive biomarker in cancer patients. Int Immunol. 2016; 28:373–82.