Long noncoding RNAs have recently been proven to regulate tumorgenesis in many cancers. However, their biological functions in glioblastoma remain largely unknown. Here we found an uncharacteristic lncRNA lncHERG that is highly expressed in human glioblastoma (GBM). We found that lncHERG knockdown inhibited cell proliferation, migration and invasion in glioblastoma in vitro and in vivo. Moreover, the higher expression of lncHERG in patients with glioblastoma indicated lower survival rate and poorer prognosis. Mechanistically, we found that lncHERG can serve as a sponge for miR-940 which is a tumor suppressor in cervical cancer and whose function has not been defined in glioblastoma. We showed that miR-940 was down-regulated in glioblastoma tissues compared to peritumor tissues. LncHERG knockdown impaired cell proliferation, migration and invasion while inhibition of miR-940 in the meantime reversed this trend. In conclusion, our study highlights the essential role of lncHERG in glioblastoma by acting as a competing endogenous RNA of miR-940, which may serve as a new prognostic biomarker in glioblastoma.

Glioblastoma (GBM), the most common and aggressive brain tumor around the world, leads to a large amount of deaths each year [1, 2]. The incidence of glioblastoma is increasing year by year. Surgical resection, radiotherapy and chemotherapy were the main methods for treatment of GBM patients [3–6]. However, the 5-year overall survival rate of patients with GBM is less than 3% [7, 8]. Due to the infiltrative growth of glioblastoma, the rate of tumor recurrence is very high [5]. There is no effective method for fully treatment of glioblastoma so far. Therefore, in order to develop new and effective therapeutic management of GBM, it is an urgent and necessary to define the molecular mechanism that regulates the genesis of glioblastoma.

Long noncoding RNAs (lncRNA) are a class of transcripts whose length is longer than 200 nucleotides and have no protein coding potential [9]. Accumulating evidences show that noncoding RNAs (ncRNA) exert essential roles in all kinds of biological processes including development, immune and especially in tumorgenesis [10–13]. In cancers, lncRNAs have been demonstrated to regulate cell proliferation, migration, invasion and apoptosis by several mechanisms [14]. A lot of lncRNAs are up-regulated or down-regulated in cancers and involved in tumor development and progression [15]. For example, lncRNA AFAP1-AS1 increases tumor growth and metastasis in HCC [16]. LncRNA DUXAP8 promotes cell proliferation and migration in gastric cancer [17]. LncRNA UCA1 promotes gallbladder cancer progression via inhibiting p21 and E-cadherin expression [18]. LncRNA CCEPR is upregulated and associated with poor prognosis in urothelial bladder carcinoma [19]. In glioblastoma, lncRNA HOXA-AS3 increases tumor progression and lncRNA TALNEC2 promotes growth of glioblastoma stem cells [6, 20]. Nevertheless, there are still many uncharacteristic lncRNAs whose functions remain to be illustrated in glioblastoma. Hence, to understand the molecular biology of glioblastoma, it is important to identify more tumor-related lncRNAs.

LncHERG is highly expressed in glioblastoma 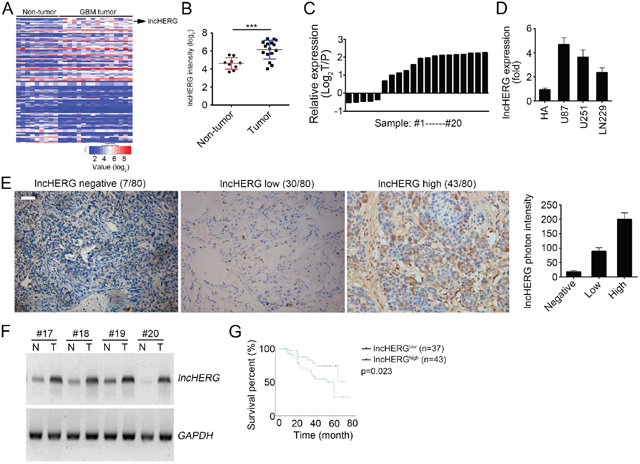 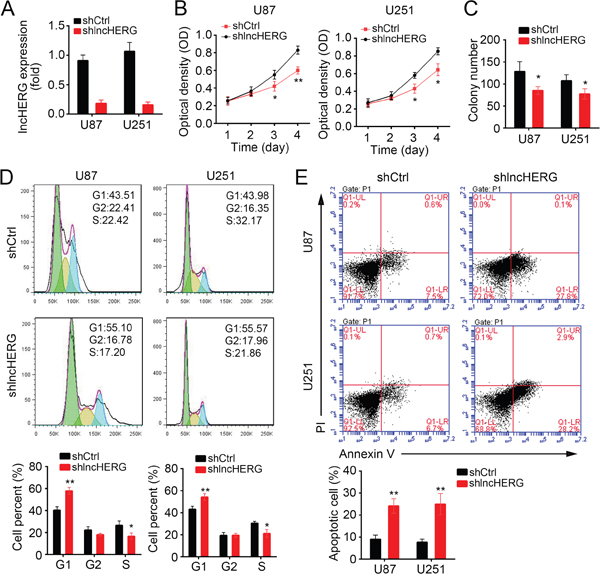 Figure 2: LncHERG promotes cell proliferation and inhibits cell apoptosis. (A) LncHERG was knocked down by transfection with specific shRNA. The mRNA levels were analyzed by qPCR in lncHERG-depleted cells. (B) MTT assays were conducted with shCtrl or shlncHERG U87 and U251 cells. LncHERG knockdown remarkably inhibited cell proliferation. (C) LncHERG knockdown impaired the abilities of colony formation of U87 and U251 cells. (D) less LncHERG-silenced cells entered into S phase. (E) LncHERG depletion dramatically increased the cell apoptosis in U87 and U251 cells. All data are representative of three independent experiments and expressed as mean ± SD. *p<0.05 and **p<0.01.

Tumor metastasis is the main cause for cancer recurrence and malignance. We wondered whether lncHERG regulated tumor metastasis in glioblastoma. We performed cell migration and invasion assays. After lncHERG knockdown, the abilities of migration and invasion of U87 and U251 cells were dramatically impaired (Figure 3A and 3B). In consistence, the expression levels of metastasis-related proteins (TWIST1, SNAIL and MMP9) were remarkably down-regulated after lncHERG knockdown in U87 and U251 cells (Figure 3C). In summary, lncHERG promoted tumor metastasis in glioblastoma. 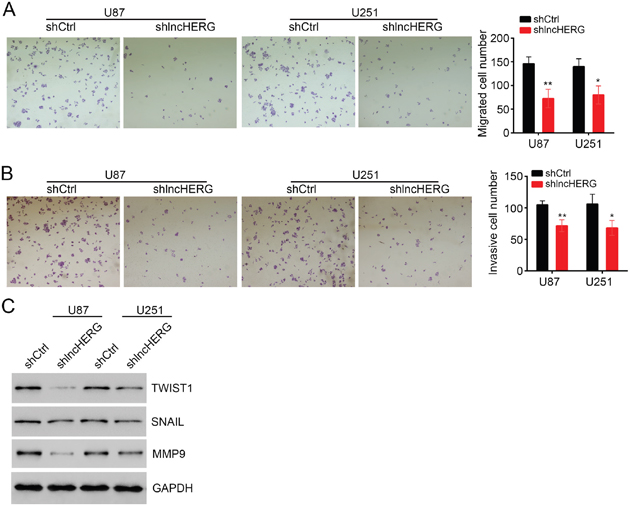 Figure 3: LncHERG enhances cell migration and invasion. (A) LncHERG knockdown seriously inhibited cell migration. (B) LncHERG silence impaired the ability of cell invasion. (C) The expression levels of tumor metastasis-related proteins were measured by WB. LncHERG depletion remarkably inhibited cell metastasis in U87 and U251 cells. All data are representative of three independent experiments and expressed as mean ± SD. *p<0.05 and **p<0.01.

To further demonstrate the role of lncHERG in vivo, we performed tumor xenograft assays. We injected 4×106 shCtrl or shlncHERG U87 or U251 cells into 6-week-old BALB/c nude mice subcutaneously. At indicative time points, we calculated tumor volumes. We found that lncHERG knockdown greatly delayed tumor propagation in vivo (Figure 4A). Then 7 weeks later, we measured the tumor weights. We found that tumors derived from shlncHERG U87 or U251 cells were lighter and smaller (Figure 4B and 4C). We then collected the formed tumors and checked cell proliferation, migration, invasion and apoptosis by western blot. We found that tumors originated from shlncHERG U87 or U251 cells showed decreased proliferation, migration and invasion but increased apoptosis (Figure 4D). Summarily, lncHERG regulated cell proliferation, migration, invasion and apoptosis in vivo. 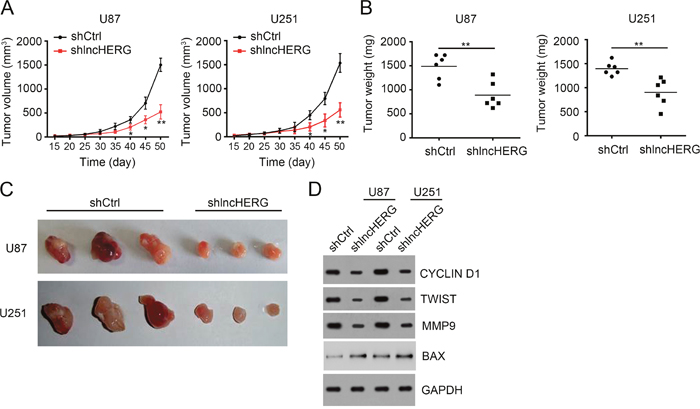 Increasing evidences showed that lncRNAs can serve as competitive endogenous RNAs to bind miRNAs [21]. To search the potential binding miRNAs of lncHERG, we made a prediction by a tool (http://mirdb.org). Some miRNAs were the potential targets of lncHERG, but miR-940 scored top. miR-940 was reported to act as a tumor suppressor. For example, miR-940 inhibited cell proliferation and apoptosis in ovarian cancer by targeting PKC-δ [22]. And miR-940 suppresses cell invasion and migration in HCC by targeting CXCR2 [23]. Besides, miR-940 also inhibited triple-negative breast cancer, pancreatic ductal adenocarcinoma and prostate cancer [24–26]. However, the function of miR-940 in glioblastoma remains elusive. We found that there are 21 potential binding sites with miR-940 in lncHERG (Figure 5A). We divided lncHERG into 4 truncations (1~500bp, 501~1000bp, 1001~1500bp and 1501~2195bp) and constructed four luciferase reporter plasmid and corresponding mutant plasmids (Figure 1A). We then conducted luciferase activity assays by transfecting pRL-lncHERG-wt or pRL-lncHERG-mut together with miR-940 mimic or inhibitor into 293T cells. We found that miR-940 mimic dramatically inhibited the luciferase activity while miR-940 inhibitor promoted the activity (Figure 5B), which demonstrated that lncHERG can bind to miR-940. Then we transfected miR-940 mimic or inhibitor into U87 or U251 cells and checked mRNA levels of lncHERG. We found that miR-940 mimic inhibited lncHERG expression while miR-940 inhibitor enhanced lncHERG expression (Figure 5C). Consistently, lncHERG knockdown promoted the expression of miR-940 while overexpressing lncHERG inhibited that of miR-940 (Figure 5D). Moreover, we found that miR-940 was down-regulated in glioblastoma compared to non-tumor tissues according to an online dataset (GSE90605) (Figure 5E). To further confirm it, we analyzed the expression of miR-940 in 80 pairs of glioblastoma tissues and found that miR-940 was also down-regulated in tumor tissues (Figure 5F). Besides, we checked the correlation of lncHERG expression with miR-940 expression in glioblastoma. We found that the expression of lncHERG was negatively correlated with that of miR-940 in 80 glioblastoma samples (Figure 5G). In a word, lncHERG sponged miR-940 which was down-regulated in glioblastoma. 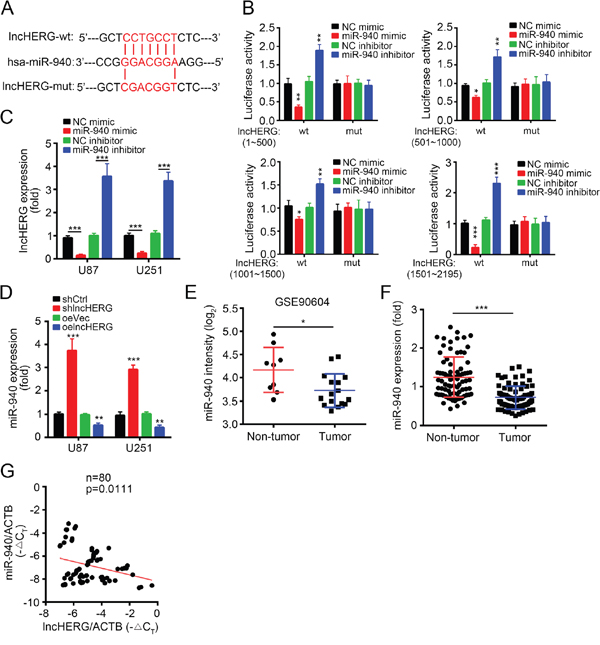 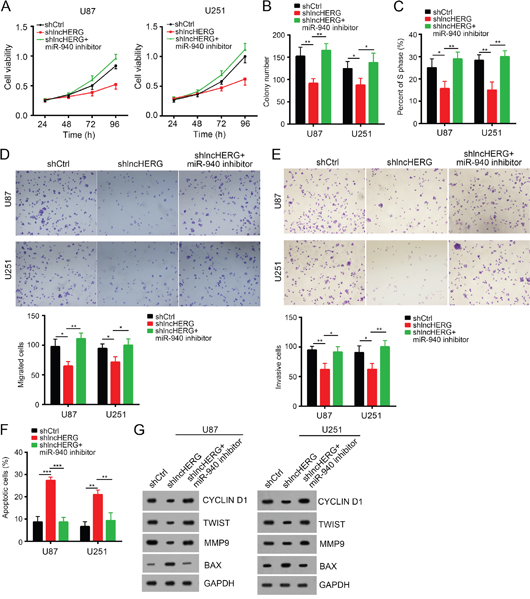 Glioblastoma was the most common and aggressive brain cancer and gave rise to lots of deaths worldwide every year [1, 2]. However, the mechanism that regulates glioblastoma development and progression is largely unknown. As the development of bioinformatics, hundreds of lncRNAs have been identified in various tumors [27]. Many lncRNAs are involved in tumorgenesis and can regulate tumor growth and metastasis [16, 28]. In glioblastoma, some lncRNAs have been reported to be essential for tumor development. For example, lncRNA H19 promotes oncogenic effects in glioblastoma [29]. Long non-coding RNA taurine upregulated 1 promotes tumor-induced angiogenesis by inhibiting microRNA-299 in human glioblastoma [30]. lncRNA RP11-838N2.4 promotes the cytotoxic effects of temozolomide in glioblastoma cell lines [31]. However, there are still large amounts of lncRNAs whose function is unknown in glioblastoma. Therefore, in order to develop new and effective therapeutic management of GBM, it is an urgent and necessary to define the molecular mechanism that regulates the genesis of glioblastoma. In our study, we showed an uncharacteristic lncRNA lncHERG that was upregulated in glioblastoma than non-tumor tissues. We showed that lncHERG depletion impaired proliferation, migration and invasion of glioblastoma in vitro and in vivo. What’s more, the higher expression of lncHERG in patients with glioblastoma indicated lower survival rate and poorer prognosis. Our study revealed the important role of lncHERG, which may serve as a new prognostic biomarker in glioblastoma.

In summary, we screened out a unidentified lncRNA lncHERG that regulated tumor development and progression in glioblastoma by directly sponging miR-940. Our research revealed the pivot role of lncHERG/miR-940 axis in glioblastoma, which may provide a new sight on the treatment of glioblastoma.

Oligonucleotide encoding shRNA targeted lncHERG or a scramble shRNA was obtained from Sangon Biotech Inc. (Beijing, China) and constructed into pLKO.1-EGFP vector for lentivirus production. U87 and U251 cells were infected with lentivirus expressing shlncHERG or shCtrl. GFP+ stable cell lines were obtained by FACS isolation. shlncHERG sequence was as follows: 5'-GCCTTACAACAGCCTCTTTAC-3'.

2×103 cells/well were seeded in a 96-well plate and cultured at 37 °C for indicated times. Cells proliferation was detected by MTT assays. After cells were cultured for 24 h, 48 h, 72 h or 96 h, MTT was added to each group of wells and incubated for 1 h at 37 °C. Measurement was carried out in absorbance at 490 nm with a microplate reader according to the manufacturer’ s instruction.

In vitro migration and invasion assays

For invasion assay, 1×105 cells/well were seeded into the upper well of the Transwell chamber (BD Biosciences) coated with Matrigel (BD Biosciences) and cultured in serum-free DMEM. The lower chamber was filled with DMEM containing 10% FBS. Cells were incubated at 37°C for 48 h and then fixed with 4% paraformaldehyde and stained by crystal violet solution for 30 min. Cells on the top surface of the insert were removed with a cotton swab and counted under a microscope in five fields. Similar procedure was also performed for cell migration assay, except that the transwell membranes were not precoated with Matrigel.

LncHERG expression in GBM tissues were analyzed using biotin-labeled specific lncHERG probes. Paraffinized sections were deparaffinized with xylene and 100% ethanol. Then sections were incubated with biotin-labeled probes for 18 h at 40 °C. DAB substrate was used for colorimetric detection of lncHERG. Finally, the sections were co-stained with hematoxylin, followed by dehydration in graded alcohols and xylene. lncHERG probe sequences as follows: #1: 5'-GGCAGGCACAAAAATGGTCT-3'; #2: 5'-AGGAACGTGGTCTGGAAGGC-3'.

All statistical analyses were performed using SPSS 20.0 (IBM, SPSS, Chicago, IL, USA) and GraphPad Prism. Student's t-test and one-way ANOVA were used to analyze 2 or multiple groups, respectively, for statistical significance. Pearson correlation coefficient analysis was used to determine the correlations. The overall survival curves were calculated with the Kaplan-Meier method and were analyzed with the log-rank test. P< 0.05 was considered statistically significant in all cases.

This work was supported by the Natural Science Foundation of Zhejiang Province (LY16H090005).