Postpartum hemorrhage is one common complication in obstetrics [1-3], which will cause ischemic damages to the endometrium [1-3]. In the clinical practice, endometrium ischemia is often followed by reperfusion, which shall lead to profound oxidative damages to the surrounding endometrial cells and tissues [1-3]. Ischemia-reperfusion is known to induce profound reactive oxygen species (ROS) production [4-6]. In addition, sustained oxidative stress shall also cause increased level of circulating lipid peroxides, along with concomitant reduction of the antioxidants [4-6]. These together could cause further injuries to the endometrial cells/tissues [1-3].

Oxygen and glucose deprivation (OGD) and following re-oxygenation (OGDR) is applied to the cultured cells, mimicking the pathological condition of ischemia-reperfusion injuries [7-10]. Interestingly, recent evidences have suggested that OGDR could induce cell necrosis, (but not apoptosis) [7, 10]. The conventional view is that cell necrosis is a passive form of cell death. Yet, recent studies have implied that necrosis could also be active, programmed and energy-consuming [11-14]. The “programmed necrosis” is mitochondrial dependent [15], which mediates cell death by a number of stimuli, including oxidative stress, calcium over-load, ultra-violet radiation (“UVR”), and several chemo-agents [11, 12, 16, 17]. Studies have shown that many different stimuli could induce p53 translocation to cell mitochondria, where it forms a complex with mitochondria permeability transition pore (mPTP) structural protein cyclophilin-D (“CypD”). The complexation shall dictate mitochondrial depolarization, mPTP opening, cytochrome C release and ROS production. This would eventually induce cell necrosis (but not apoptosis) [11-13, 16-19]. One goal of this study is to test whether this necrosis pathway also participates OGDR-induced endometrial cell death in vitro.

Ginsenosides are the primary active constituents in the root of Ginseng [20, 21]. Ginsenoside Rh2 (GRh2) is a converted ginsenoside, which has shown various pharmaceutics activities [20, 21]. In the current study, we show that GRh2 protects endometrial cells from OGDR possibly via inhibiting programmed necrosis pathway.

The current study aimed to test the potential effect of Ginseng Rh2 (GRh2) on OGD/re-oxygenation (OGDR)-treated endometrial cells. First, T-HESC cells, an established human endometrial cell line [22], were treated with gradually-increased concentrations of GRh2, from 1-25 μM. The cell counting kit-8 (CCK-8) assay results in Figure 1A demonstrated that treatment of GRh2 alone at tested concentrations (1-25 μM, for 24 hours) didn’t change the survival of T-HESC endometrial cells. Meanwhile, GRh2 treatment also failed to induce T-HESC cell death, the latter was tested by trypan blue staining assay (Figure 1B). Notably, exposure of T-HESC cells with OGD (for 4 hours)/re-oxygenation (“OGDR”, for another 24 hours) induced potent viability reduction (CCK-8 OD decrease, Figure 1A) and cell death (trypan blue staining increase, Figure 1B). Remarkably, such effects by OGDR were largely attenuated with co-treatment of GRh2 (Figure 1A and 1B). GRh2, at 5-25 μM, significantly inhibited OGDR-induced T-HESC cell viability reduction (Figure 1A) and cell death (Figure 1B). Notably, GRh2-induced T-HESC cell protection against OGDR was dose-dependent (Figure 1A and 1B). At a low concentration (1 μM), GRh2 was however ineffective (Figure 1A and 1B). 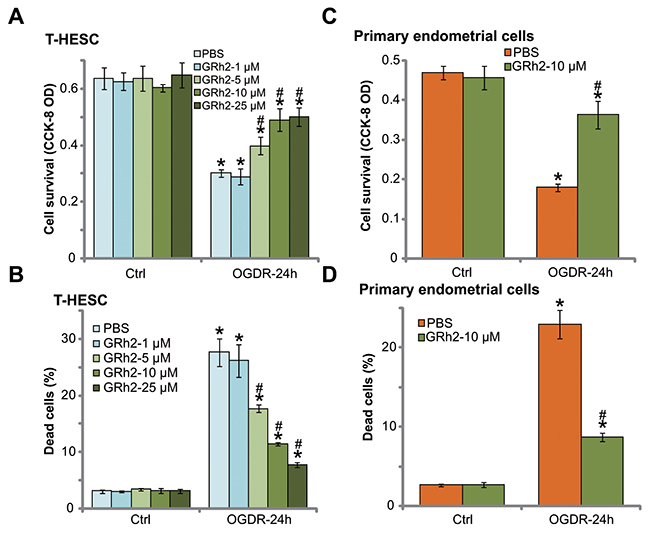 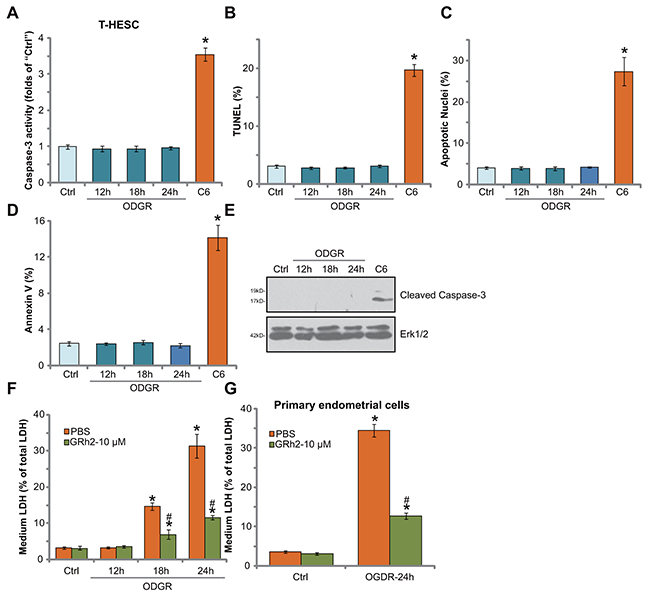 Cell necrosis is another form of cell death [15]. Lactate dehydrogenase (LDH) release to the medium is often detected as a marker of cell necrosis in vitro. In the current study, we showed that medium LDH content was significantly increased following OGDR exposure in T-HESC endometrial cells (Figure 2F). Remarkably, such effect was largely inhibited by co-treatment of GRh2 (Figure 2F). These results imply that GRh2 might protect T-HESC cells from OGDR via inhibiting cell necrosis, but not apoptosis. In the primary murine endometrial cells, GRh2 (10 μM) similarly inhibited OGDR-induced cell necrosis (LDH release, Figure 2G). 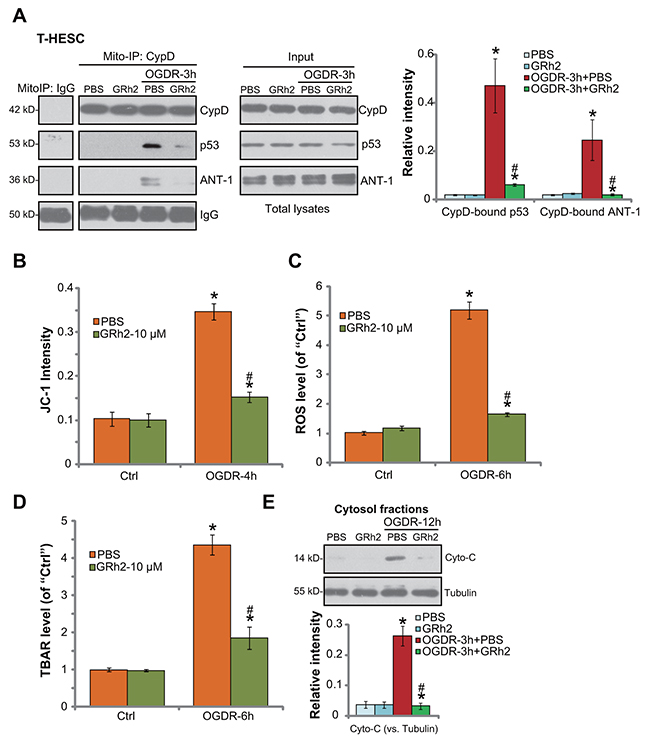 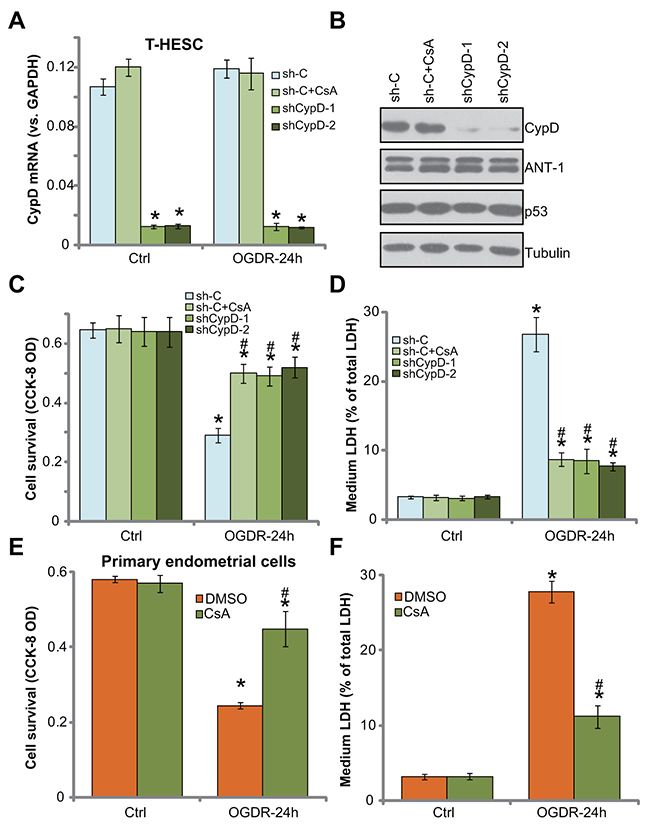 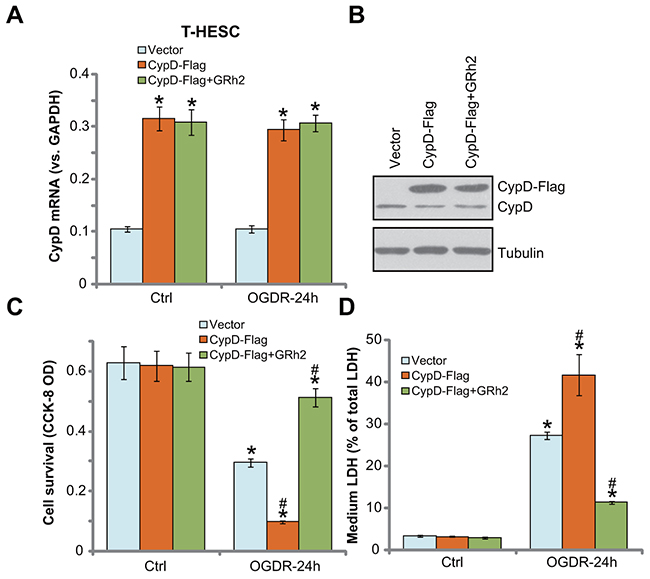 p53 is a key molecule to mediate cell apoptosis [33-37]. Recent studies, however, have implied that p53 is also required for the induction of cell necrosis. Various stimuli and stresses, i.e. hypoxia, calcium overload, and oxidative stresses, could trigger p53 translocation to mitochondria, where it associates with CypD [27]. Mitochondrial Cyp-D-p53 complexation is proven to be required for the mitochondrial depolarization [27], and more importantly, subsequent cell necrosis (programmed necrosis). Inhibition of the CypD-p53 complex, genetically or pharmacologically, could efficiently protect cells from the stresses [27].

Although GRh2 has displayed many different functions in various cell types, this is, as far as we know, the first study to test its potential activity in endometrial cells. Here, we showed that GRh2 efficiently protected T-HESC human endometrial cells and primary murine endometrial cells from OGDR. At the molecular level, we propose that inhibition of the programmed necrosis pathway could be the primary mechanism of its cytoprotection against OGDR. Although the underlying mechanisms need further characterizations, our results imply that it would be interesting to further test GRh2’s activity against endometrial cell ischemia-reperfusion injuries.

GRh2, the CypD inhibitor cyclosporine A (CsA), and puromycin were purchased from Sigma-Aldrich (Shanghai, China). The two non-overlapping lentiviral CypD shRNAs (“-1/-2”) as well as the scramble control non-sense lentiviral shRNA were provided by Dr. Guo [11]. All the reagents for cell culture were purchased from Gibco (Suzhou, China). GRh2 was always freshly dissolved in warm phosphate buffer solution (PBS) before the experimental usage. The antibodies utilized in this study were provided by Santa Cruz Biotechnology (Santa Cruz, CA) and Cell Signaling Tech (Suzhou, China). The short-chain C6 ceramide was purchased from Avanti Polar Lipids (Alabaster, Alabama).

The immortalized human endometrial cell line, T-HESC [22], was purchased from the Cell Bank of Shanghai Institute of Biological Science of CAS (Shanghai, China). The T-HESC cells were cultured in DMEM-F12 medium with 10% fetal bovine serum (FBS), and 4 mM L-glutamine, 0.25% HEPES plus necessary antibiotics, at 37°C in a humidified atmosphere of 5% CO2 [22].

Female, 8-12 week-old C57BL/6J mice were purchased from the Experimental Animal Center of Soochow University (Suzhou, China). Animals were housed in filter-top cages under conventional conditions. The detailed protocol was described in detail in a previous study [38]. Three days prior to hysterectomy, mice (n = 5/culture) were injected s.c. with 100 ng of estrogen E2 solution to synchronize the cycle. The acquired primary mouse uterine tissues were then incubated with 0.05% trypsin-EDTA supplemented with 1 mg/mL collagenase (Sigma-Aldrich) for 30 min at 37°C. Next, the uterine tissues were transferred to DMEM/Hams F-12 nutrient plus 10% FBS. After 5 min, tissues were transferred into 3 mL of ice-cold HBSS and vortexed. The resulting epithelial cells were abandoned using gravity sedimentation, and the step was repeated three times. Afterwards, the primary endometrial stromal cells were pelleted and resuspended in the complete DMEM medium with 10% FBS (Gibco, Belgium), 0.5 mg/mL fungizone and 100 mg/mL gentamicin. The animal protocol was approved by the Ethics Review Board of Soochow University (Suzhou, China).

The viability of endometrial cells was tested by cell counting kit-8 (CCK-8) kit (Dojindo Laboratories, Kumamoto, Japan), according to the standard procedure. The CCK-8 optic density (OD) at 450 nm was recorded.

The release of LDH from the intact cells to the conditional medium is a characteristic marker of cell necrosis in vitro [39]. In this study, a two-step LDH detection kit (Promega, Shanghai, China) was employed to test LDH level in the medium, and its level was always normalized to total LDH (combination of medium LDH and cellular LDH).

The OGDR procedure was described in a previous study [40]. Briefly, endometrial cells were first placed into an airtight chamber and equilibrated for 10 min with a continuous flux of gas (95% N2/5% CO2). The chamber was sealed and placed in an incubator for 4 hours (mimic oxygen glucose deprivation or OGD). Afterwards, the endometrial cells returned back to the complete medium and re-oxygenated. Control cells were placed in norm-oxygenated complete medium.

Following the indicated treatment, the endometrial cells were incubated with RIPA lysis buffer (Biyuntian, Wuxi, China). The quantified protein lysate samples (40 μg per treatment of each lane) were separated by the 10-12% SDS-PAGE gels, and were transferred to the polyvinylidene difluoride (PVDF) membrane [41]. The detailed protocol of Western blotting assay and data quantification were described previously [42, 43].

For each treatment, 20 μg of cytosolic extracts were incubated with the caspase assay buffer [12] together with the caspase-3 substrate [12] for 2 hours at the room temperature, the release of 7-amido-4-(trifluoromethyl) coumarin (AFC) was quantified, using a Fluoroskan system set [12]. The AFC’s OD value (at 405 nm) was recorded to reflect caspase-3 activity.

The Annexin V FACS assay of cell apoptosis and TUNEL nuclei staining assay of apoptosis were described in detail in the previous studies [44]. Annexin V ratio was sorted by Becton-Dickinson FACScan (Shanghai, China). TUNEL ratio (vs. total number of cells) was calculated, from at least 300 cells of 5 random views for each treatment.

After the applied treatment, T-HESC cells were harvested and homogenized by the buffer of 250 mM sucrose, 20 mM HEPES, 10 mM KCl, 1.5 mM MgCl2, 1 mM EDTA, 1 mM EGTA, and 1 mM dithiothreitol. After centrifugation, the supernatants were collected as the cytosolic fractions. The resulting pellets were then re-suspended in the above buffer plus 10 μL NP-40, which were the mitochondrial fraction lysates. The quantified mitochondrial lysates (400 μg per sample) were pre-cleared and incubated with anti-CypD antibody [27, 45]. The mitochondrial complexes were then captured by the protein G-Sepharose beads (Sigma). CypD-p53-ANT-1 association was then tested by Western blotting assay.

The fluorescent dye DCFH-DA (2′,7′-dichlorofluorescein diacetate) assay was applied to examine cellular ROS level [48-50]. DCFH-DA will be hydrolysed by intracellular esterases to DCF. Briefly, T-HESC cells with the treatment were incubated with DCFH-DA (100 μM, Invitrogen) for 60 min at the room temperature under the dark. The DCF fluorescence intensity at 530 nm, reflecting cellular ROS intensity, was detected by the above-described fluorescence reader (Titertek Fluoroscan, Germany).

As previously described [50], cellular lipid peroxidation was evaluated by the thiobarbituric acid reactive substances (TBAR) assay [51]. Briefly, 20 μg lysate proteins of each treatment were first mixed with 20% of acetic acid and thiobarbituric acid solution. After heating, the mixture was centrifuged, and the red pigment dye in the supernatant was examined by the microplate reader [51]. TBAR activity was expressed as nM of malondialdehyde per mg protein.

T-HESC cells were cultured at 50% confluence in low-serum (1%) medium in six-well tissue culture plate. The CypD shRNA lentivirus (10 μL/mL medium per well) or the scramble control shRNA lentivirus (10 μL/mL medium per well) was added to T-HESC cells overnight. Stable clones were selected with puromycin (1 μg/mL) starting at 24 hours after infection, for a total of 8 days. All the resulting stable cells were then assayed for knockdown of CypD via qRT-PCR assay and Western blotting assy.

The CypD pSuper-puro-Flag vector and the empty vector were provided by Dr. Fang [13]. The CypD construct or the vector was transfected through Lipofectamine 2000 reagent (Invitrogen, Suzhou, China) to the cultured T-HESC cells. After 24 hours, cells were selected by puromycin (1.0 μg/mL) for another 8 days. CypD expression in the resulting stable cells was verified by both qRT-PCR assay and Western blotting assy.

Postpartum hemorrhage remains a prominent cause of maternal morbidity and mortality, which could possibly be managed by using a stepwise progressive approach [1-3]. Studies have demonstrated that manual and pharmacologic interventions are first-line treatments [1-3]. Our results provided new mechanistic insights (programmed necrosis) and related intervention strategies (GRh2) of ischemia-reperfusion-related endometrial cell injuries.

The authors have no competing interest.

This work is supported by the Science Foundation of Changzhou Second People Hospital.