FHIT down-regulation was inversely linked to aggressive behaviors and adverse prognosis of gastric cancer: a meta- and bioinformatics analysis

FHIT (fragile histine triad) acts as diadenosine P1, P3-bis (5'-adenosyl)-triphosphate adenylohydrolase involved in purine metabolism, and induces apoptosis as a tumor suppressor. We performed a systematic meta- and bioinformatics analysis through multiple online databases up to March 14, 2017. The down-regulated FHIT expression was found in gastric cancer, compared with normal mucosa and dysplasia (p < 0.05). FHIT expression was negatively with depth of invasion, lymph node metastasis, distant metastasis, TNM staging and dedifferentiation of gastric cancer (p < 0.05). A positive association between FHIT expression and favorable overall survival was found in patients with gastric cancer (p < 0.05). According to Kaplan-Meier plotter, we found that a higher FHIT expression was negatively correlated with overall and progression-free survival rates of all cancer patients, even stratified by aggressive parameters (p < 0.05). These findings indicated that FHIT expression might be employed as a potential marker to indicate gastric carcinogenesis and subsequent progression, even prognosis.

The transcription deletion of FHIT was detectable in intrahepatic cholangiocellular carcinomas induced by N-nitrosobis (2-oxopropyl) amine in female Syrian golden hamsters [11]. FHIT-deficient mice easily developed forestomach tumors and invasive bladder carcinoma after the treatment with N-nitrosomethylbenzylamine and N-butyl-N- (4-hydroxybutyl) nitrosamine respectively [12, 13]. BBN(N-butyl-N-(-4-hydroxybutyl)- nitrosamine)-induced urinary bladder cancer could be prevented in FHIT knock-out mouse by Rofecoxib, a cox-2 inhibitor [14]. Lung cancer susceptibility in FHIT-deficient mice was increased by Vhl haploinsufficiency [15]. Fujishita et al. [16] found that FHIT knockout mice developed tumors in the lymphoid tissue, liver, uterus, testis, forestomach and small intestine. In the present study, we performed a meta- and bioinformatics analysis to clarify the clinicopathological and prognostic significances of FHIT expression in gastric cancer at both mRNA and protein levels.

Figure 1 is a flow diagram of article selection for our meta-analysis. As shown in Table 1, a total of 21 articles on the relationship between FHIT expression and cancer risk, clinicopathological or prognostic parameters of gastric cancer were retrieved for our meta-analysis by immunohistochemistry from PubMed, Web of Science, BIOSIS, SciFinder and CNKI. Only 10 articles contained the samples of normal gastric mucosa [17–26] and 7 did gastric precancerous lesion-dysplasia [17, 22, 25–29]. There appeared the comparison between FHIT expression and clinicopathological characteristics of gastric cancer in 19 pieces of paper, including sex, depth of invasion, lymph node metastasis, distant metastasis, TNM staging and Lauren’s classification [17–36]. Finally, we discussed the prognostic significance of FHIT expression in 7 articles [20, 25, 30–32, 36, 37]. 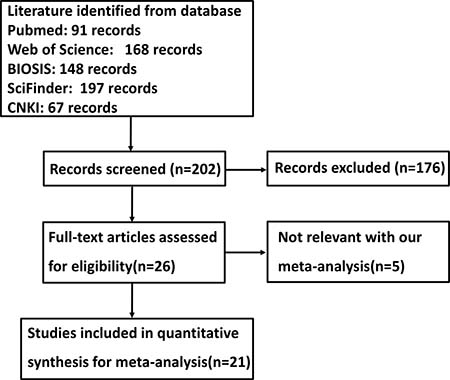 We analyzed the association between FHIT expression and cancer susceptibility of gastric normal mucosa in 10 studies with 1113 cancers and 518 controls. As a result, we found down-regulated FHIT expression in gastric cancer, compared with normal mucosa (Figure 2A, p < 0.00001). Additionally, the cancer risk of FHIT-negative dysplasia was also analyzed and the same trend was observed as gastric mucosa using 656 cancer and 228 dysplasia (Figure 2B, p = 0.0003).

Association between FHIT expression and clinicopathological parameters of gastric cancer

Association between FHIT expression and survival rate of gastric cancer

As indicated in Figure 2L, the pooled result from 7 datasets demonstrated a positive association between FHIT expression and favorable overall survival in the patients with gastric cancer (HR = 1.53, 95% CI: 1.30–1.80, p < 0.0001).

The heterogeneity test was performed as shown in Figure 3. Sensitivity analysis was used to evaluate individual study’s influence on the pooled results by deleting one single study each time from pooled analysis. As a result, the correlation between FHIT expression and TNM staging in Wang's study had a significant effect on the pooled OR as shown in Figure 2I. When this study was excluded, the heterogeneity test was significantly reduced (data not shown). 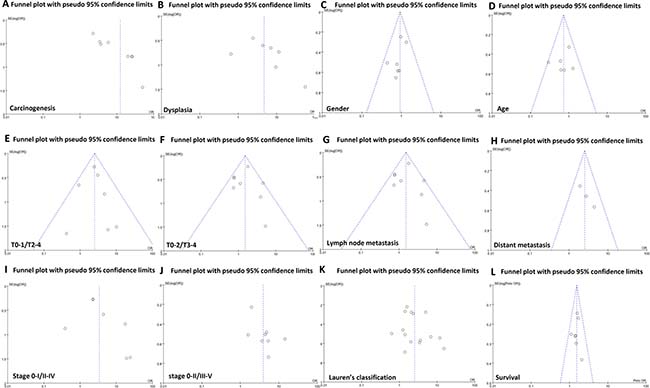 Table 2: The prognostic significance of FHIT mRNA in gastric cancer

Consistent with the data about colorectal cancer [47], bladder cancer [48], thyroid cancer [49] and lung cancer [50], we found down-regulated FHIT expression in gastric cancer, compared with gastric mucosa or dysplasia in the present study, suggesting that FHIT hypoexpression contributes to gastric carcinogenesis as a late event. Huang et al. [51] found that cervical microinvasive and invasive carcinomas had significantly lower FHIT expression than normal epithelium and dysplasia. Kuwai et al. [52] demonstrated that FHIT protein expression were lower in invasive colorectal carcinoma than in adenoma and carcinoma in situ. Combined with these findings, it was suggested that gradual FHIT down-regulation promoted gastric carcinogenesis. Reportedly, FHIT down-regulation or loss might be due to its promoter methylation and loss of heterozygosity in cancers, but not its gene mutation [47, 49, 53, 54].

Reportedly, FHIT expression was positively related to the favorable prognosis of the patients with lung cancer [62], oral squamous cell carcinoma [55], head and neck squamous cell carcinoma [63], diffuse large B-cell lymphoma [64] and cervical cancer [51]. It might be also demonstrated to indicate the favorable prognosis of cholangiocarcinoma [58], non-small cell lung cancer [65], cervical cancer [66], renal clear cell carcinoma [67] and tongue cancer [68] as an independent factor. Our meta-analysis showed that FHIT expression was positively linked to the favorable prognosis of the patients with gastric cancer. In contrast, our bioinformatics data indicated that FHIT mRNA expression was negatively associated with overall and progression-free survival rates of the patient with gastric cancer, even stratified by clinicopathological features. The paradoxical results are not strange since mRNA levels do not usually predict the corresponding protein levels because it takes a long distance from mRNA to functional protein by translation and posttranslational modification.

In conclusion, FHIT expression underwent a down-regulation during gastric carcinogenesis as a late event. It was negatively correlated with depth of invasion, lymph node metastasis, distant metastasis, TNM staging and dedifferentiation of gastric cancer. FHIT expression might be employed as a good potential marker for favorable prognosis of gastric cancer patients, while it was the converse for its mRNA. The limitations of this study include the potential publication bias from positive results in articles and the survival data extraction from survival curves.

We performed a publication search using PubMed, Web of Science, BIOSIS, SciFinder and CNKI updated on March 14, 2017. The following search terms were used: (FHIT OR fragile histine triad) AND (gastric OR stomach) AND (cancer OR carcinoma OR adenocarcinoma). Searching was done without restriction on language or publication years. Inclusion criteria for studies: (1)articles to observe the alteration in FHIT expression in gastric cancer by immunohistochemistry; (2) papers to compare FHIT expression with pathobiological behaviors and prognosis of gastric cancer by immunohistochemistry. Exclusion criteria included: (1) abstract, comment, review and meeting; (2) duplication of the previous publications; (3) Western blot, RT-PCR, cDNA microarray, or transcriptomic sequencing for FHIT expression; (4) lack of sufficient information.

Based on the inclusion criteria, two reviewers (HC Zheng and LL Liu) independently extracted information from all eligible publications. The following information were included in each study: name of first author, year of publication, country, ethnicity, cancer types, source of control, antibody company, numbers of cases and controls, expression alteration, correlation with aggressive features, and follow-up times. Regarding survival analysis, we used Engauge Digitizer software to extract data from Kaplan-Meier curves and calculated the Hazard ratios (HR) and their corresponding 95% confidence intervals (CI). Any disagreement was resolved through discussion until the two reviewers reached a consensus.

The individual gene expression level of FHIT was analyzed using Oncomine (www.oncomine.org), a cancer microarray database and web-based data mining platform for a new discovery from genome-wide expression analyses. We compared the differences in FHIT mRNA level between gastric normal tissue and cancer. All data were log-transformed, median centered per array, and standard deviation normalized to one per array. The expression data (RNA-seqV2) and clinicopathological data of 392 gastric cancer patients were downloaded from the Cancer Genome Atlas (TCGA) database by TCGA-assembler in R software. We integrated the raw data, analyzed FHIT expression in gastric cancer, and compared it with clinicopathological and prognostic data of the patients with gastric cancer. Additionally, the prognostic significance of FHIT mRNA was also analyzed using Kaplan-Meier plotter (http://kmplot.com).

HWE was evaluated using Chi-square test in control groups of each study. Strength of association between FHIT expression and cancer risk was assessed by odds ratios with 95% confidence intervals. Statistical significance of the pooled OR was determined by Z test. If there was no significant heterogeneity, the fixed effect model (Mantel-Haenszel method) would be employed. Otherwise, the random effect model (DerSimonian and Laird method) would be used excluding prognostic analysis. Heterogeneity effect was then quantified by I2 test, which was subdivided into low, moderate and high degrees of heterogeneity according to the cut-off values of 25%, 50% and 75% respectively. Publication bias was evaluated by funnel plot and quantified by Begg’s test and Egger’s test to assess funnel plot asymmetry. Meta-analyses were performed with Revman software 5.3 and data from TCGA database was dealt with SPSS 10.0 software using student t test. Two-sided p < 0.05 was considered as statistically significant.