Bone metastasis is found in more than 80% of patients in advanced stages of breast cancer [1] and is highly treatment resistant and results in extreme pain and high mortality. More effective mouse models and treatment are necessary.

S. typhimurium, which is a facultative anaerobe, was previously attenuated with purine and other auxotrophic mutations, for cancer therapy [2]. In a Phase I clinical trial on patients with metastatic melanoma and renal cell carcinoma, the S. typhimurium strain tested (VNP20009) was attenuated by lipid A-modified (msbB) and purine auxotrophic (purI) mutations. VNP20009 was safely administered to patients but colonized the patients’ tumors to a limited extent, perhaps because it was over-attenuated [3].

Another strain of S. typhimurium, A1-R, has been developed by our laboratory which has increased antitumor efficacy. S. typhimurium A1-R is auxotrophic for Leu-Arg which prevents it from mounting a continuous infection in normal tissues, but does not inhibit tumor targeting and virulence. S. typhimurium A1-R has no other attenuating mutations as does VNP20009 and, therefore, may have higher tumor virulence.

The ability to grow in viable tumor tissue may account, in part, for the unique antitumor efficacy of S. typhimurium strains [4].

S. typhimurium A1-R was able to eradicate primary and metastatic tumors in monotherapy in nude mouse models of prostate, breast, and pancreatic cancer, as well as sarcoma and glioma [4-10]. Tumors with a high degree of vascularity were more sensitive to S. typhimurium A1-R, and vascular destruction appears to play a role in S. typhimurium A1-R antitumor efficacy [11,12]. Tumor vessel destruction and tumor-growth inhibition was enhanced by primer dosing of S. typhimurium A1-R in immunocompetent transgenic mice expressing the nestin-driven green fluorescent protein (ND-GFP), which is selectively expressed in nascent blood vessels [13].

Efficacy of S. typhimurium A1-R on MDA-MB-435 cells in vitro 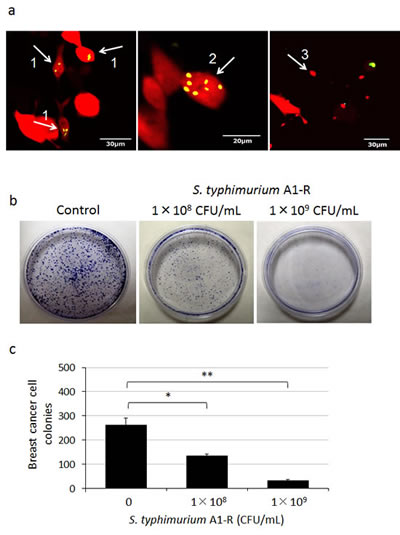 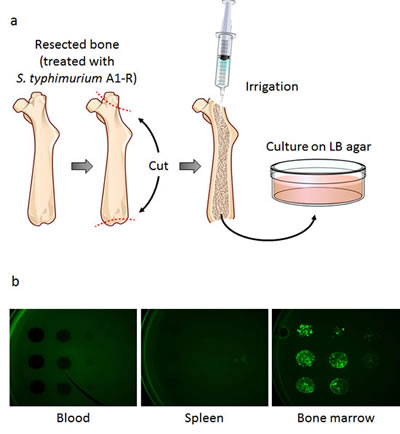 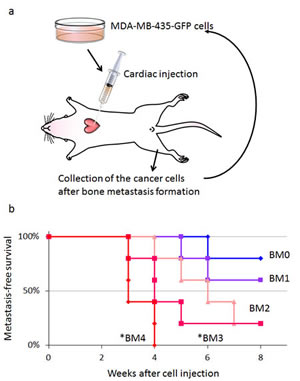 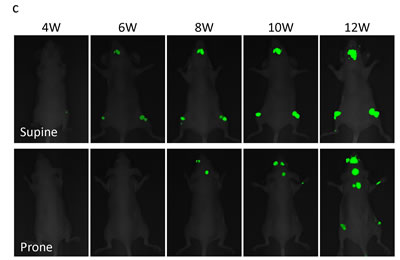 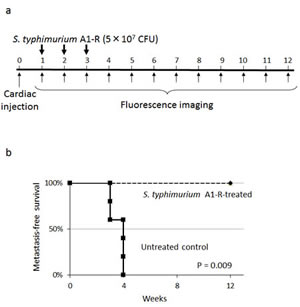 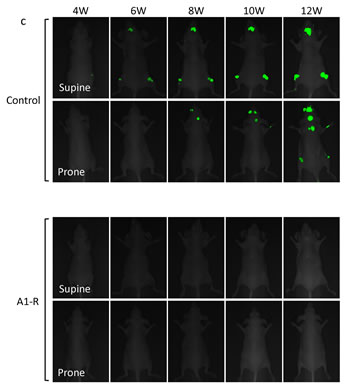 Efficacy of S. typmimurium A1-R on breast cancer cell growth in the tibia

MDA-MB-435-GFP-BM4 cells (5×105) were injected into the intramedullary cavity of the tibia in nude mice (n=12) (Fig. 5a). Two weeks after intratibial injection of cancer cells, six mice were treated three times with weekly i.v. S. typhimurium A1-R (Fig. 5b). Fluorescence imaging demonstrated that the control mice had rapid tumor growth of the tibial tumor. In contrast, the S. typhimurium A1-R-treated mice had slow growth (Fig. 5c). The fluorescent tumors area of the untreated control mice and S. typhimurium A1-R-treated mice 10 weeks after bacterial therapy was 196.6 ± 22.1 mm2 and 61.8 ± 15.0 mm2, respectively (P < 0.001) (Fig. 5d). The bone marrow was observed with an FV1000 confocal microscope to confirm the presence of GFP-expressing cancer cells.

The present study demonstrates that S. typhimuium A1-R has and could significantly inhibit or prevent bone metastasis. These results indicate a promising approach to a currently highly treatment-resistant disease. 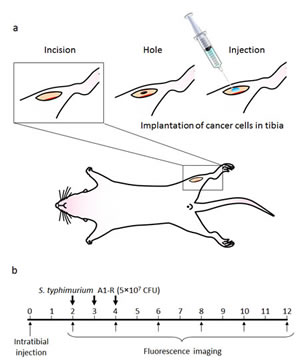 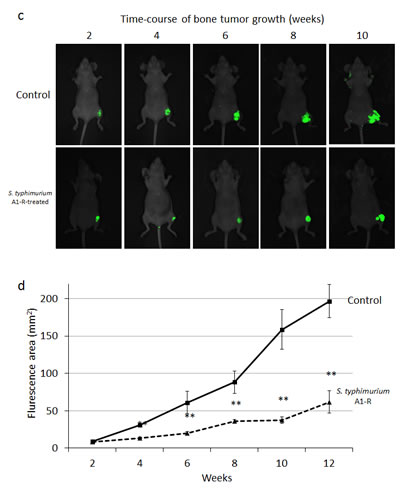 MDA-MB-435-GFP or MDA-MB-435-RFP cells were planted in 35 mm dishes (2×103). S. typhimurium A1-R-GFP was grown in LB medium and added to the cancer cells (1×108 or 1×109 CFU/dish). After 1 h incubation at 37°C, the cells were rinsed and cultured in medium containing gentamycin sulfate (100 µg/ml) to kill external but not internal bacteria. Invasion and destruction of MDA-MB-435-RFP cells by S. typhimurium A1-R-GFP was visualized with the FV1000 confocal microscope. Eight days after treatment with S. typhimurium A1-R, MDA-MB-435-GFP colonies were fixed in methanol and stained with 1% crystal violet as previously described [26]. ImageJ (National Institute of Mental Health, Bethesda, Maryland, USA) was used to quantify the colonies of the cells.

MDA-MB-435-GFP cells were harvested from subconfluent cell culture plates, washed with PBS, and resuspended in PBS. Cells (2×105) were injected into the left cardiac ventricle of female nude mice using a 27G needle. Mice were anesthetized with a ketamine mixture (10 µl ketamine, HCL, 7,6 µl xylazine, 2.4 µl acepromazine maleate and 10 µl H2O) before injection. A successful injection was characterized by the pumping of arterial blood into the syringe. Development of bone metastases was initially monitored with an Illumatool imaging system (Lightools Research, Encinitas, CA, USA). To isolate cancer cells from the bone metastasis, mice were sacrificed, and the affected bones were excised. Both ends of the bones were cut open. A one ml syringe with a 27G needle was filled with PBS and inserted into one end of the bone. Mouse bone marrow cells as well as cancer cells were forced out from the other end by applying pressure to the syringe. Cells were collected by centrifugation and washed once with PBS before being cultured at 37°C. After two weeks of culture, a pure population of human cancer cells was obtained as confirmed by fluorescence imaging. After 4 cycles of this procedure, we obtained a highly metastatic cells line, termed MDA-MB-435-GFP-BM4. Time-course imaging of the mice after cardiac injection of MDA-MB-435-GFP-BM4 demonstrated progression of multiple metastases to bone including skull, femur, and vertebrae.

MDA-MB-435-GFP-BM4 cells (2×105) were injected intracardially in nude mice. One week after injection, mice (n=5) (treatment group) were administered S. typhimurium A1-R (5×107 CFU, i.v.) once a week for 3 weeks. The remaining mice (control group) were administered the same volume of PBS. To evaluate metastasis-free survival, GFP-expressing lesions were initially observed using the Illumatool every week. Metastatic bone lesions were also imaged every two weeks using the iBOX Scientia Imaging System (UVP LLC, Upland, CA, USA). Metastasis-free survival was defined as the time from cardiac injection of cancer cells to the time of detection of bone metastases with the Illumatool. At the end of the follow-up, the metastases were excised and the bone marrow was washed with PBS to confirm the presence of GFP-expressing cancer cells.

Efficacy of S. typhimurium therapy on breast cancer cell growth in the tibia

A midline skin incision (5 mm) was made just below the knee joint to expose the tibial tuberosity (Fig. 6). Matrigel (5 µL) (BD Bioscience, San Jose, CA) and MDA-MB-435-GFP-BM4 cells (5×105) were co-injected into the intramedullary cavity of the tibia with a 0.5 mL 28 G latex-free insulin syringe (0.5 mL 28 G) (TYCO Health Group LP, Mansfield, MA). The skin was closed with a 6-0 suture. Two weeks after injection, fluorescence imaging was performed to confirm the GFP-expressing tumor was growing, using the iBOX. Nude mice (n=5) were administered S. typhimurium A1-R (5×107 CFU, i.v.) once a week for 3 weeks. The remaining mice (untreated control group) were administered the same volume of PBS. Fluorescence imaging was performed on treated and untreated mice, and GFP-expressing areas were recorded every 2 weeks for 12 weeks using the iBOX.

Data showing comparisons between two groups were assessed using the Student’s t-test. Comparisons among more than two groups were assessed using analysis of variance (ANOVA). The Kaplan-Meier method was used for bone metastasis-free survival and log-rank test was used for statistical significance of the difference between the two groups. Differences were considered significant when p < 0.05. Data are expressed as mean ± SEM. Statistical analyses were performed with EZR (Saitama Medical Center, Jichi Medical University).

This work was supported by the National Cancer Institute grant CA132971.