Polycystic ovary syndrome (PCOS) is one of the most common endocrine disorders in women. However, the epigenetic mechanism involved in PCOS progression remains largely unknown. Here, combining the DNA methylation profiling together with transcriptome analysis, we showed that (i) there were 7929 differentially methylated CpG sites (β > 0.1, P < 0.05) and 650 differential transcripts (fold change > 1.5, P < 0.005) in PCOS compared to normal ovaries; (ii) 54 genes were identified with methylated levels that were correlated with gene transcription in PCOS; and (iii) there were less hypermethylated sites, but many more hypomethylated sites residing in CpG islands and N_Shore in PCOS. Among these genes, we identified that several significant pathways, including the type I diabetes mellitus pathway, p53 signaling pathway and NOD-like receptor signaling pathway, and some immune and inflammatory diseases may be highly involved in PCOS development. These results suggested that differences in genome-wide DNA methylation and expression patterns exist between PCOS ovaries and normal ovaries; epigenetic mechanisms may in part be responsible for the different gene expression and PCOS phenotype. All of this may improve our understanding of the basic molecular mechanism underlying the development of PCOS.

Polycystic ovary syndrome (PCOS) is the most common endocrinopathy, affecting about 10% of the reproductive-age female population [1], which has significant and diverse clinical symptoms including reproductive dysfunction (chronic anovulation, polycystic ovary, hyperandrogenism and hirsutism), metabolic disorders (insulin resistance, abdominal obesity, hypertension and dyslipidemia), and psychological distress (anxiety, depression, and sensitivity to stress) [1-4]. In addition to genetic predisposition, environmental and lifestyle factors contribute to the pathogenesis of PCOS [5]; an emerging body of evidence suggests that epigenetic events may in part be responsible for the development of PCOS [6-7]. In the past several years, genomics, proteomics and metabolomics studies have been performed with the goal of identifying factors linked to these disorders [5,8], and have provided reliable information about the molecular pathways involved in PCOS. However, to date, little is known about epigenomics, especially the DNA methylation profiles in the pathophysiology of PCOS. DNA methylation is an important epigenetic phenomenon that modulates gene expression without affecting the DNA sequence, to adapt to the environmental and lifestyle changes [9]. For this reason, the present study was undertaken to investigate comprehensive DNA methylation profiling, together with transcriptome analysis in ovaries from PCOS patients and normal ovaries, and to provide novel insight into the epigenetic-mediated dysfunction in the pathogenesis of PCOS.

DNA methylation analysis showed 7929 differentially methylated CpG sites, about 3.2% of total sites in PCOS ovaries compared to normal ovaries (Fig. 1A and Supplementary Table 1); the hypermethylated and hypomethylated CpG sites were about 59.8% or 40.2%, respectively (Fig. 1B). Interestingly, there was a significant difference in methylated CpG content and neighborhood context (N_Shelf, N_Shore, Island, S_Shore, S_Shelf, Open Sea) between hypermethylated or hypomethylated CpG sites; in particular, less hypermethylated sites, but many more hypomethylated sites were residing in CpG islands and N_Shore (Fig. 1C and D). However, there was no significant difference in methylated CpG sites residing in chromosomal locations (Chr1-22, and XY), coding distribution (Coding RNA, Non-coding RNA, Other) and gene structure (TSS1500, TSS200, 5’UTR, First exon, Gene body, 3’UTR, Other) (Fig. 1C and D). As shown in Supplementary Table 2, expression profiling analysis showed 650 differential transcripts in PCOS ovaries compared to normal ovaries. Hierarchical clustering of the differentially methylated and expressed probes identified PCOS-specific gene clusters and similarities (Supplementary Fig. 1). Overall, these data suggest the existence of a marked difference in methylation and expression patterns, both of which are implicated in the development of PCOS. 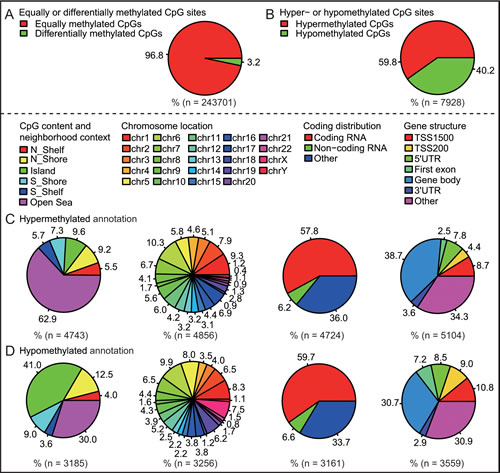 To begin defining the functional significance of the extensive changes in DNA methylation and gene expression profiling of PCOS, GO analysis was performed, which revealed distinct functional categories for the PCOS-associated gene lists (Supplementary Table 3). As shown in Fig. 2A, these differentially methylated genes were widely associated with cell adhesion, the regulation of GTPase activity, neuron differentiation, synapse organization, skeletal system development and extracellular structure organization. In addition, differentially expressed genes were found to be highly involved in basal cellular processes like the regulation of transcription, cell death, apoptosis, cell proliferation, and response to stress, endogenous stimuli, hormone stimuli and organic substances (Fig. 2B). 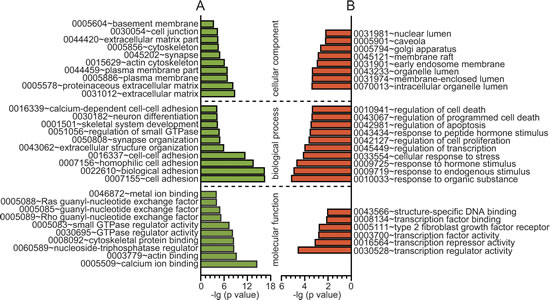 To further investigate key pathways linked to these distinct genes, the interaction of the significant pathways associated with PCOS was built according to the KEGG database; the distinct functional categories for the PCOS-associated gene lists are shown in Supplementary Table 4. Our analysis showed that these differentially methylated genes are widely involved in various cellular pathways; the top 10 are linked to type I diabetes mellitus, graft-versus-host disease, viral myocarditis, regulation of actin cytoskeleton, dorso-ventral axis formation, allograft rejection, focal adhesion, autoimmune thyroid disease, cell adhesion molecules and antigen processing and presentation (Fig. 3A), while these differentially expressed genes were only distributed in three significant pathways, including type I diabetes mellitus, the p53 signaling pathway and the NOD-like receptor signaling pathway (Fig. 3B). Notably, the co-existence of the type I diabetes mellitus pathway was observed in differentially expressed and methylated profiles. 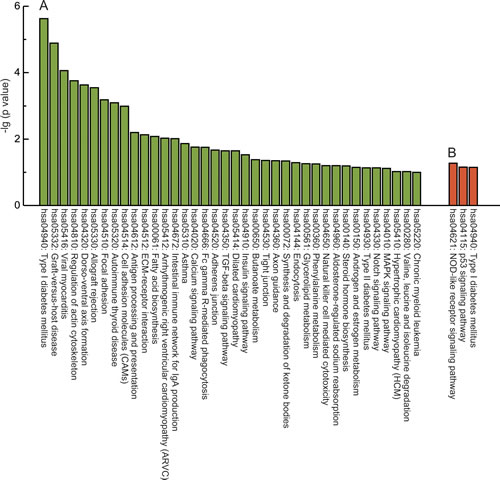 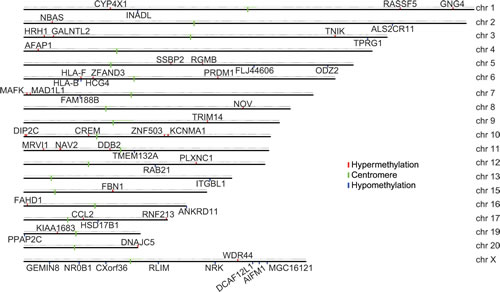 Emerging evidence indicates that epigenetic mechanisms may in part be responsible for the PCOS phenotype [6,7,14]. However, to date, few studies have examined genome-wide DNA methylation profiling, especially together with gene expression profiling for PCOS ovaries. In this study, we reported for the first time that there were at least 3% differentially methylated sites and 650 differential transcripts between PCOS ovaries and normal ovaries.

Functional analysis of these genes associated with differentially methylated sites and expressed transcripts revealed strong enrichment in the biological process and molecular function. For gene expression profiling, these differentially expressed genes were found to be highly involved in basal cellular processes, such as transcriptional regulation, cell proliferation, apoptosis and death, and response to stress and stimulus. For DNA methylation profiling, these differentially methylated genes are especially associated with the regulation of cell adhesion and small GTPase activity. Similarly, several lines of evidence have demonstrated that intercellular and intracellular adhesion molecule-1, vascular cell adhesion molecule-1, and platelet endothelial cell adhesion molecule-1 all have an important role in PCOS [15-17]. Likewise, Small GTPases are a family of hydrolase enzymes that can bind and hydrolyze guanosine triphosphate. The Ras superfamily is the most common of small GTPases, which is further divided into subfamilies: RAS, RHO, RAB, RAP, ARF, RAN, RHEB, RAD and RIT. To date, RAS [18,19], RAC1 [20], RAB5B [21] and RAB8A [22] have been shown to be involved in the PCOS pathophysiology, but other GTPase-related members were not reported.

Epidemiological studies have reported that individuals with type I diabetes have a higher prevalence of PCOS than the general population [23]. Consistent with this, KEGG analysis showed that the type I diabetes mellitus pathway was enriched in differentially expressed profiling. Intriguingly, the type I diabetes mellitus pathway was also significantly enriched in differentially methylated profiling. It seems that abnormal epigenetic and transcriptional regulation may be jointly involved in the progression of type I diabetes-related PCOS. In addition, the p53 signaling pathway is crucial for regulating proliferation, apoptosis, genomic stability and the inhibition of angiogenesis [24]. The NOD-like receptor signaling pathway is a critical regulator of innate and adaptive immune responses [25]. KEGG analysis of expression profiling suggested that the two pathways may potentially play a direct or indirect role in PCOS, although few reports have linked them to PCOS. Immune diseases (such as graft-versus-host disease, allograft rejection, autoimmune thyroid disease and intestinal immune network for IgA production) and inflammatory diseases (such as viral myocarditis and asthma) were significantly enriched in differentially methylated profiling. According to these results, it can be speculated that immune and inflammatory processes are a key regulator of PCOS. It should be noted that chronic inflammation and immune responses have been increasingly recognized as an important cause of endocrine, metabolic and reproductive disorders that characterize PCOS [26].

As shown in Table 1, 54 genes were identified in which the methylated levels were positively correlated with gene transcription. These data may help to identify several novel epigenetically regulated genes that are possibly involved in PCOS, and these aberrantly methylated and expressed genes may also be potential biomarkers of PCOS. Notably, there were several changes in DNA methylation which were located in gene coding regions, therefore not directly regulating gene transcription, but still having the capacity to influence gene expression via alternative splicing programs [27]. Until recent years, CCL2 [28,29] and FBN1 [30] have been suggested to contribute to PCOS, but other genes are still worthy of further investigation.

Taken together, our study demonstrated that differences in genome-wide DNA methylation and gene expression patterns exist between PCOS ovaries and normal ovaries, and understanding the epigenetic mechanisms involved in PCOS may yield new insight into the pathophysiology of the disorder.

The investigation was conducted in accordance with the ethical standards and according to the Helsinki Declaration of 1975.

Genomic DNA was extracted from ovarian tissue with a DNeasy Blood and Tissue Kit (Qiagen, Valencia, CA). A total of 1.25 μg of genomic DNA was subjected to bisulfite conversion using the EZ DNA Methylation Gold Kit (Zymo Research, Irvine, CA). About 600 ng of the bisulfite-converted DNA was analyzed on an Infinium HumanMethylation450 BeadChip (Illumina, San Diego, CA) following the manufacturer’s guidelines. These Chips feature more than 450,000 methylation sites within and outside CpG islands. Methylation values for individual CpG sites were obtained as β-values, calculated as the ratio of the methylated signal intensity to the sum of both methylated and unmethylated signals after background subtraction. The β-values were reported as a DNA methylation score ranging from 0 (non-methylated) to 1 (completely methylated).

DNA methylation profiling data were processed by the Methylation Module of GenomeStudio v1.9 software using default parameters (Illumina). In each individual, probes with a detection P > 0.05 were removed, and β-values in PCOS cases were compared against controls using two-sided Student’s t-tests. Statistical differences were considered significant at β > 0.1. Expression profiling data were assessed using the Affymetrix GeneChip Operating Software (Affymetrix). Statistical differences were considered significant at fold change > 1.5, P < 0.005. DAVID (Database for Annotation, Visualization, and Integrated Discovery) was used to identify functional groups of differential genes and biological processes which are associated with PCOS; Gene Ontology (GO) and Kyoto Encyclopedia of Genes and Genomes (KEGG) annotations were also made.

This work was supported by the Natural Science Foundation of China (No. 81402130) and Doctoral Start-up Foundation of Liaoning Province (No. 20141045). We are grateful to Qi Wang (Shanghai Biotechnology Corporation, Shanghai, China) for data analysis.

8. Escobar-Morreale HF, Insenser M, Corton M, San Millan JL, Peral B. Proteomics and genomics: A hypothesis-free approach to the study of the role of visceral adiposity in the pathogenesis of the polycystic ovary syndrome. Proteomics Clin Appl. 2008; 2:444-455.