3Centre for Epidemiology and Biostatistics, Melbourne School of Population and Global Health, The University of Melbourne, Parkville, Victoria, Australia

Germline mutations in the BRCA1 or BRCA2 genes are responsible for about 5% of breast cancer (BC) and are associated with a substantially increased lifetime risk of BC to 70 years old with approximately 65% and 45% of risk, respectively, in Caucasian populations [1, 2].

In particular, Asians have different BC-related characteristics from the Westerners. For example, Asians have a different distribution of genetic and environmental risk factors, such as lower incidence of BC and mortality rates, different age-specific incidence rate, poor prediction of BC assessment models developed in the Western populations, and higher prevalence of BRCA2 than BRCA1 mutations [18-20]. Therefore, identifying whether the effects of reproductive factors as risk modifiers of BC in BRCA mutation carriers are similar or not is necessary, regardless of ethnic differences. To date, few studies have focused on the effects of reproductive factors on BC for BRCA1/2 mutation carriers in East-Asian population. The effect of reproductive factors on BC risk in the general population may be also different from that in genetically high-risk groups, such as familial BC or early-onset BC; however, previous studies on BC with family history (FH) or early-onset BC did not exist.

Table 1 shows the characteristics of female participants included in this study among the Korean Hereditary BC (KOHBRA) study. The BC patients with BRCA2 mutation, non-carriers with FH of BC, and non-carriers with early-onset BC were older than the controls. The proportion of postmenopausal women was higher in BRCA2 carrier BC patients than BRCA2 carrier controls (P <0.05). In all groups, the proportion of current drinkers was lower in BC patients than controls (P < 0.05).

1Age at diagnosis in breast cancer patients; Age at enrollment in controls

1Adjusted for all listed variables in the table, age at menarche, contraceptive use, number of parity, current drinking status, and birth cohort 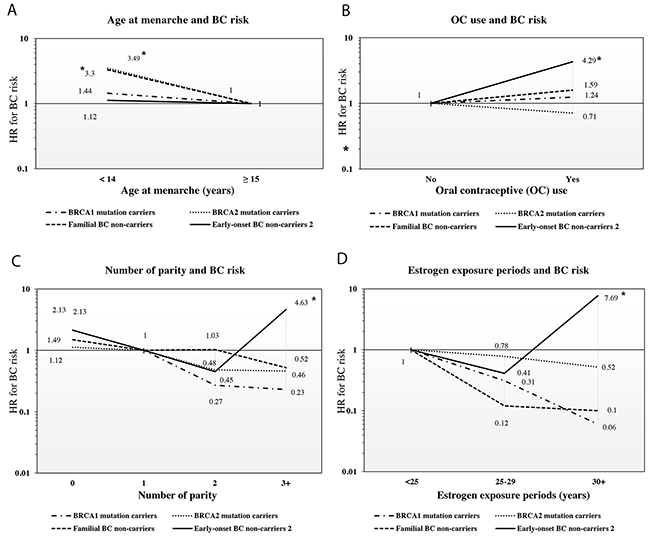 We evaluated the association between reproductive factors as environmental risk modifiers and BC risk in the hereditary highly susceptible women, such as BRCA1/2 mutation carriers and BRCA1/2 mutation unrelated to high-risk females such as non-carriers with FH of BC and with early-onset BC.

In this study, the number of parity and BC risk was inversely associated not only in BRCA1/2 mutation carriers but also in non-carriers with FH. However, this association was not observed in early–onset BC who were non-carriers, and rather the risk of early-onset BC was increased. Several epidemiological studies have reported that the risk of BC increases when young women give birth more than three times, which is consistent with our findings of early-onset BC [21, 22]. Excessive hormone levels from pregnancy and childbirth can promote malignant-transformed cell growth. This process can temporarily increase the risk of BC and then return to its original level with decreased hormone levels [23, 24]. More than three repetitive pregnancies and births in a very short period, especially at younger ages, may promote recurrent cumulative cell growth and thus increase the risk of BC.

Previous reports regarding the age at FFTP and BC risk among BRCA1/2 mutation carriers were inconsistent. Some studies showed that a later age at FFTP increased the BC risk in BRCA1/2 [15] or BRCA2 mutation carriers [8, 9]; other studies showed no association [13, 14, 25] or decreased risk in BRCA1 mutation carriers [8]. The inconsistency among studies might be due to the age of BC occurrence, which alters the pregnancy history, or differences in the statistical power based on the limited number of BRCA1/2 mutation carriers included in the studies. In the general population, pregnancy increased the risk of BC in the short term, followed by a long-term risk reduction, with an effect of pregnancy on decreased BC risk among women >40 years old. This is explained by exposure to high hormonal concentrations during pregnancy, which increases the growth of preclinical tumors; however, pregnancy hormones can also reduce the susceptible cells in the breast by promoting differentiation [26]. According to this hypothesis, the analysis was stratified based on the attained age (≤40 vs. >40 years) and identified decreased risk in BRCA1 carriers aged ≤40 years and increased risk in BRCA1/2 carriers aged >40 years as the age at FFTP increased. Our finding that OC use increased the early-onset BC risk in non-carriers was consistent with that of a previous meta-analysis [27], suggesting that reproductive factors including endogenous and exogenous hormonal factors affected the early-onset cases more.

Results of studies associating menarche and BC risk in hereditary highly susceptible women were inconsistent. Previous Western meta-analyses [28, 29] and individual studies [12, 17] have observed a correlation between earlier menarche and higher BC risk in BRCA1 mutation carriers, whereas we observed these associations in BRCA2 mutations or non-carriers with FH. This result might be due to the difference in BRCA1/2 mutation prevalence of the ethnic groups. The prevalence of BRCA1 mutation is higher in Western populations; however, in Asian populations, BRCA2 mutation prevalence is higher [20]. Therefore, risk modification effects of menarche may be observed only among mutation carriers with high prevalence. In non-carriers with FH, the relationship between menarche and BC risk has not been reported. However, the observed association in this study would be biologically accountable. The age at menarche has familial trait and could be regulated by other susceptible genes besides BRCA1/2 mutations and/or gene and environment interactions [30, 31].

This study had several limitations. First, the KOHBRA study population was selected based on possible hereditary traits for BC from genetic cancer clinics [34]. Effects of selection bias were still present even after minimizing them through a weighted cohort analysis to adjust for the over-representation of the affected cases [35]. Second, family members’ participation in the study would be affected by the probands’ decisions to inform and recommend genetic mutation tests because the controls were selected from the family members of BC patients who are BRCA1 or BRCA2 carriers. Another potential limitation was that when the duration of estrogen exposure period was calculated, parity, breastfeeding, and duration of OC use or hormonal replacement therapy were not considered [10].

Our results indicate that reproductive factors as risk modifiers are heterogeneously associated with BC risk among these highly susceptible women, such as BRCA1/2 mutation carriers, non-carriers with FH, and non-carriers with early-onset BC. These results are somewhat different from those in the general population. Different directions in the associations compared with the general population should be considered in the management of genetically and highly susceptible women.

The KOHBRA study is a multicenter cohort study consisting of hereditary high-risk BC patients and family members of BC patients with BRCA1/2 mutation. Hereditary high-risk BC patients were defined as BC patients with FH of breast or ovarian cancers, male BC patients, female BC patients aged ≤40 years at diagnosis, bilateral BC patients, or BC patients with other organ cancers. All patients were tested for BRCA1/2 genetic mutations. BRCA1/2 mutation testing was conducted using fluorescence-based conformation-sensitive gel electrophoresis, denaturing high-performance liquid chromatography, and direct sequencing in four DNA testing laboratories certified annually by the Korean Institute of Genetic Testing Evaluation. Pathogenic mutation was defined as a protein-truncating mutation and a missense mutation with confirmed association with the disease [34]. If a BC patient had a mutation, relatives aged ≥20 years were asked to participate in the study and received test for family-specific BRCA1/2 mutation. All participants provided written informed consent and asked to complete structured questionnaires via a personal interview, including their general characteristics, past medical history, FH of malignancies, dietary and physical activities, and reproductive factors. The institutional review board of each participating center approved this study design (IRB #B-0707-047-005). Details of the study have been described fully elsewhere [34].

Of the 2,858 participants recruited from 2007 to 2014, female participants (n=2,684) were considered in the analysis after excluding male BC patients and male family members. After excluding six carriers with both BRCA1 and BRCA2 mutations, 222 BRCA1 and 359 BRCA2 mutation carriers were included. Of the 2,097 non-carriers of BRCA1/2 mutation, 882 BC patients with FH of BC in the first- and second-degree relatives, 795 BC patients aged ≤40 years at diagnosis, and 201 controls were included. Appendix Figure 1 describes the details of the selection process of the participants.

The t-test or chi-square test was used to compare the differences in the distribution of selected characteristics between those affected with BC and controls. To assess the association between the reproductive factors and BC risk, the weighted multivariate Cox proportional hazard regression model was used to retrospectively analyze the data based on the factors modifying the disease risks in carriers of highly penetrant genes to provide unbiased disease risks [35]. Weights were assigned based on the affected status, age, and BRCA1/2 gene mutation, considering the age-specific population incidence and HR of BC for BRCA1/2 gene mutation carriers in the Korean population [36], and the total follow-up period in affected and unaffected subjects as external rates. For non-carriers, weights were also assigned (Appendix Table 1). These weights have been adjusted for ascertainment bias caused by over-sampling of affected cases because the recruitment of participants was via the genetic clinics [35].

The HRs and 95% CIs, adjusted for family clustering and covariates, were used to determine the associations between reproductive factors and risk of BC in the four groups. To estimate the time to diagnosis, the follow-up started at birth, and subjects were censored at the age during interview and BC diagnosis for the controls and BC patients, respectively. The Cochran’s Q test was used to determine the heterogeneity across the HRs (95% CIs) between the four groups [37]. All statistical analyses were conducted using the SAS software (ver. 9.1; SAS Institute, Cary, NC, USA) and Stata/SE (ver. 12.0; LP StataCorp, College Station, TX, USA).

This study was supported by a grant from the National R&D Program for Cancer Control, Ministry of Health & Welfare, Republic of Korea (#1020350 and #1420190), a Grant-in-Aid for Cancer Research and Control from the National Cancer Center of Korea (# 1710171), Basic Science Research Program through the National Research Foundation of Korea (NRF) funded by the Ministry of Science, ICT and Future Planning (NRF-2016R1C1B1013621), and a grant of the Korea Health Technology R&D Project through the Korea Health Industry Development Institute (KHIDI), funded by the Ministry of Health & Welfare, Republic of Korea (grant number: HI16C1127).

The authors state that they have no competing interests.