**Authors for correspondence with equal contribution

Osteosarcoma (OS) is a malignant solid bone tumor that is highly malignant with low survival rates [1, 2]. Nearly 30-40% of the patients with localized osteosarcoma undergo relapse due to lung metastasis [3]. The survival rates of patients with metastatic OS is below 30%[4, 5]. The 5-year survival rate of OS patients is 55-70% despite improved surgical procedures and multidrug chemotherapy [6, 7]. Therefore, there is an urgent need to identify new therapeutic and prognostic biomarkers associated with osteosarcoma progression and metastasis.

Nuclear division cycle 80 (Ndc80) is a kinetochore complex made up of two heterodimers, CDCA1-KNTC2 and SPC24-SPC25 [13]. It is essential for stable kinetochore-microtubule anchoring and normal chromosomal segregation during mitosis [14]. During mitosis, the SPC24/SPC25 protein complex anchors the Ndc80 complex to the inner kinetochore with the nuclear spindle microtubules and kinetochores [13, 15]. Disruption of spindle checkpoint proteins alters chromosomal segregation resulting in genetic instability and aneuploidy [16]. The spindle checkpoint proteins, SPC24 and SPC25 are implicated in colorectal and hepatocellular carcinomas [14, 17]. In this study, we investigated the role of SPC24 in osteosarcomagenesis. 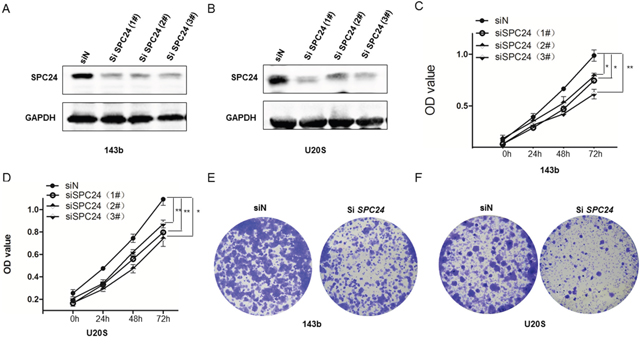 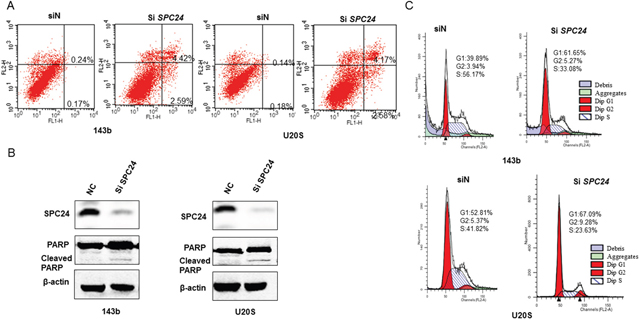 Next, we investigated the role of SPC24 in osteosarcoma metastasis by Transwell invasion assays. SPC24 knockdown in U2OS and 143b cells decreased cell migration (Figures 4A-4B and Supplementary Figure 1D). 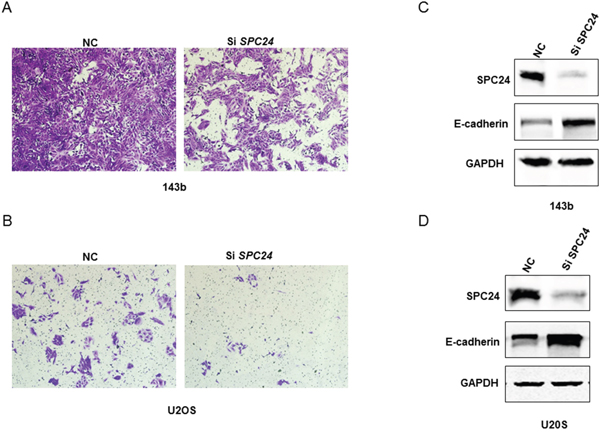 Next, we investigated the effects of SPC24 knockdown on in vivo osteosarcoma progression by xenografting control and SPC24 knockdown OS cells into dorsal flanking sites of 5 week old nude mice. We observed that the size and weight of shSPC24 tumors were highly reduced than shN tumors (p<0.01; Figure 5A-5D). Western bolt analysis demonstrated decreased EGFR and p-ERK as well as increased E-cadherin in shSPC24 tumors than shN tumors (Figure 5E-5F). 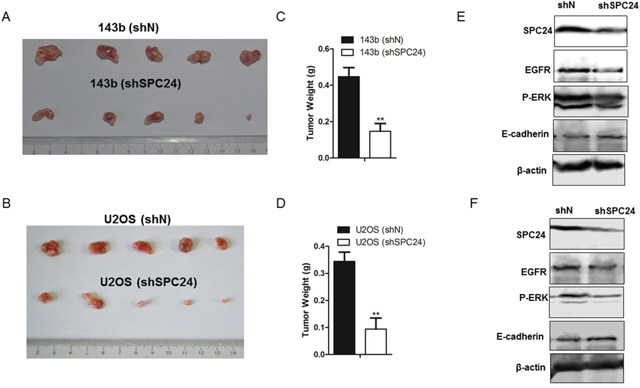 Osteosarcoma (OS) is the most common bone tumor. Osteosarcoma patients with pulmonary metastasis have a survival rate of <20% despite aggressive surgery and intensive chemotherapy [21]. Hence, identifying critical pathways regulating osteosarcoma metastasis is of paramount importance to develop novel therapeutic strategies. Human osteosarcoma xenograft models have been used to identify genetic factors and proteins that are associated with tumor progression and metastasis [22]. In this study, we demonstrate the oncogenic role of SPC24 in osteosarcomagenesis.

Disruption of spindle checkpoint proteins disrupts chromosomal segregation resulting in genetic instability and aneuploidy [16]. The changes in chromosomal copy number (aneuploidy) and aberrant chromosomal segregation contribute directly to the development and metastasis of malignant tumors [14, 23, 24]. SPC24 is a core component of the Ndc80 kinetochore complex, which is essential for directional movement of the chromosomes to the spindle poles during anaphase [25]. We demonstrate that SPC24 knockdown OS cell lines show decreased cell growth and proliferation and increased apoptosis.

For transient SPC24 knockdown, 3 siRNAs against SPC24, (1) 5’-GAGCCUUCUCAAUGCGAAGTT-3; (2) 5’-CCGAGAAGCAGCUGCGAGATT-3’; and (3) 5’-UACCACCAA GUUAGUAAAATT-3’ [14] were transfected with TransExcellent (Cenji Biotech, Shanghai, China) according to manufacturer’s instructions. SPC24 mRNA and protein expression in the transfected cells was analyzed by qRT-PCR and western blot at 72 h.

Transwell matrigel assay was used to determine OS cell invasiveness as described previously [30]. In the upper part of the transwell chamber, 5×104 cells were seeded in DMEM or RPMI medium without FBS, whereas DMEM or RPMI medium with 10% FBS was added in the lower transwell chamber. After 24 h, the cells on the upper side of the transwell membrane were removed by cotton swabs. The migrating cells on the lower side of the insert filter were fixed with 10% buffered formaldehyde, stained with 1% crystal violet and quantified with a light microscope (Olympus).

Cell apoptosis was determined by AnnexinV-FITC/PI Apoptosis Detection Kit (Abcam, Cambridge, MA, USA) according to the manufacturer’s protocols. The cells were washed in ice-cold PBS, re-suspended in 200 μl binding buffer and incubated with 5 μl Annexin V-FITC and 5 μl propidium iodide (PI) for 15 min at 4°C in the dark. Then, the cells were analyzed by flow cytometry.

SPC24-knockdown and control cells (2×106 cells/100 μl) were injected into the dorsal flanking sites of 5 week old female BALB/c nude mice. After 3 weeks, the mice were euthanized and the tumors were harvested and used for both biochemical as well as immunohistochemical (IHC) staining. IHC staining was performed on paraffin embedded samples that were sectioned and stained as described.

Data are presented as mean ± s.e.m. from at least three independent experiments. Difference between 2 groups was determined by student’s t-test. Difference at different time points among groups was evaluated by ANOVA. P < 0.05 was considered statistically significant.