Results: 35 AFP-GC and 48 non-AFP-GC patients were included. Our present study revealed that blood type O (15 cases, 42.8%) and A (18 cases, 37.5%) were predominantly observed among AFP-GC and non-AFP-GC patients, respectively. Intriguingly, the least consistently was blood type AB (8.5%, 14.6%). Among AFP-GC patients, pre-operative serum AFP levels were weakly and reversely associated with pre-operative percentage of lymphocytes in the peripheral blood (R2 = 0.1556). The level of alkaline phosphatase (ALP) was highly correlated with the level of lactate dehydrogenase (LDH) (R2 = 0.6682) and CEA (R2 = 0.6813). The level of CEA was moderately correlated with the level of LDH (R2 = 0.3903). By contrast, no any associations between ALP, LDH, CEA, AFP, and peripheral lymphocytes were observed among those 48 non-AFP-GC patients.

Materials and Methods: Retrospective analysis was carried out for 2773 inpatients of gastric cancer from January 2012 to November 2016 in the Second Affiliated Hospital of Zhejiang University School of Medicine.

Conclusions: The aggressive biological features of AFP-producing GC are closely associated with abnormality of other tumor biomarkers and decrease of the proportion of peripheral lymphocytes, implying that post-operative increase of peripheral lymphocytes might benefit GC patients. Combined use of multiple biomarkers is of significance in comprehensive evaluation of AFP-producing GC patients and assessment for those with high risk of cancer recurrence.

Alpha-fetoprotein (AFP) was firstly detected in the human fetus in 1956, which is normally synthesized in the fetal liver as early as 6 weeks of gestation [1, 2]. Increase of serum AFP level one-year after birth is indicative of either hepatocellular carcinoma or yolk sac tumor [3]. Although the incidence of AFP-producing gastric cancer (GC) is not high (approximately 1.2–15%), its aggressive features and poor prognosis have recently acquired a lot of attention for further studies such asliver metastasis, vascular invasion, and lymph node metastasis [4]. Intensive exploration of optimal therapeutic strategies is required to achieve better patients’ survival [3]. In this present study, thirty-five cases of AFP-producing gastric cancer were retrospectively summarized and intriguingly a couple of characteristics of AFP-producing GC were identified.

Gastric cancer is one of the most common malignant tumors in the world. Its mortality rate occupies one fifth of all tumors [3]. It was reported that the diagnostic rate for early stage gastric cancer in China is as low (about 10%) as that in the western countries owing to opportunistic screening although endoscopy is widely available in rural and urban areas. Most gastric cancer was unfortunately diagnosed at advance stage [5, 6]. Most of GC cases in our study were in the advanced stage. Therefore, our research findings on AFP-producing GCs are of great value even for the western countries.

In the past, we systematically summarized biological behavior and molecular characteristics of AFP-producing GC [3]. Noticeably and importantly, serum AFP level is not well-studied for postoperative follow-up. It was reported that AFP-producing GC became recurrent without re-elevation of serum AFP level [7]. Therefore, our present study retrospectively analyzed thiry-five cases with elevated serum AFP levels. A couple of novel characteristics of AFP-producing GC were identified such as the relationships betweenalkaline phosphatase (ALP), lactate dehydrogenase (LDH), carcino-embryonic antigen (CEA), AFP, and percentage ofperipheral lymphocytes. These findings will shed light on further understanding AFP-producing gastric cancer and developing interventional therapeutics to improve prognosis in future clinical practice.

2,773 cases of gastric cancers during 2012–2016 were found in our hospital’s database. Of them, there is 35 AFP-GC patients (1.26%) at the age of 66.0 ± 10.9 years and their serum AFP level is 574.1 ± 1708.2 ng/mL. The ratio of male and female ratio is 1.5. 15 patients (42.8%) were blood type O positive, whereas the least is blood type AB-positive (8.5%). Metastases were detected in 25 (71.4%) AFP-producing GC patients, 5 (14.3%) liver metastasis and 20 (57.1%) metastasis of lymph nodes. Nevertheless, 28 (80%) patients received surgeries including palliative or radical surgeries. 12 cases of cardia (34.3%) and 7 cases of body (20%) of gastric adenocarcinoma were found, whereas 16 tumors were located in the antrum part (45.7%) (Table 1). The clinicopathological features showed that 90% of AFP-producing GC patients have T2 or deeper invasion. 34 (97.1%) patients underwent radical gastric cancer surgeries (Table 1). Furthermore, our findings revealed that high levels of peripheral AFP did not reflect the degree of tumor invasion in pathology. The patients with high levels of serum AFP (all > 250 ng/mL) might successfully receive radical gastrectomy. Pathological findings manifested that 34 (97.15%) cases were poorly differentiated adenocarcinoma (PDA) (22 cases, 62.85%) or moderately differentiated adenocarcinoma (MDA) (12 cases, 34.3%). Only one AFP-producing GC patient had well differentiated adenocarcinoma (WDA) (Table 1).

Although significant pattern was not detected in the cancer antigen 19–9 (CA19–9), carcino-embryionic antigen (CEA) and AFP levels among GC patients with both negative and positive cytology serum and peritoneal lavage fluid [9], it was found that anemia and elevated levels of serum CEA, CA19-9, CA125 were frequently detected among 80% (28/35), 60% (21/35), 42.9% (15/35), 20% (7/35) of AFP-producing GC patients, particularly for those with serosal involvement, lymphatic and venous invasion, and lymph node metastasis [10]. In addition, our findings exhibited that there were 18 cases (51.4%) with low serum level of albumin (Total: 3.5 ± 0.4 g/dL). Therefore, our present study attempted to analyze the relationships among peripheral biomarkers in these 35 AFP-producing patients. Our present study firstly revealed that pre-operative serum AFP levels were not associated with other biomarkers such as CA125, CEA or CA 19–9. However, pre-operative serum AFP levels were weakly and reversely associated with pre-operative percentage of lymphocytes in the peripheral blood (R2 = 0.1556). Furthermore, it was interestingly found that the level of alkaline phosphatase (ALP) was highly correlated with the level of lactate dehydrogenase (LDH) (R2 = 0.6682) and CEA (R2 = 0.6813). The level of CEA was moderately correlated with the level of LDH (R2 = 0.3903) (Figure 1). By contrast, no any associations between ALP, LDH, CEA, AFP, and peripheral lymphocytes were observed among those 48 non-AFP-GC patients (ALP and LDH, R2 = 0.021; CEA and ALP, R2 = 0.0141; CEA and LDH, R2 = 0.013; AFP and peripheral lymphocytes, R2 = 0.0152) (Figure 2). 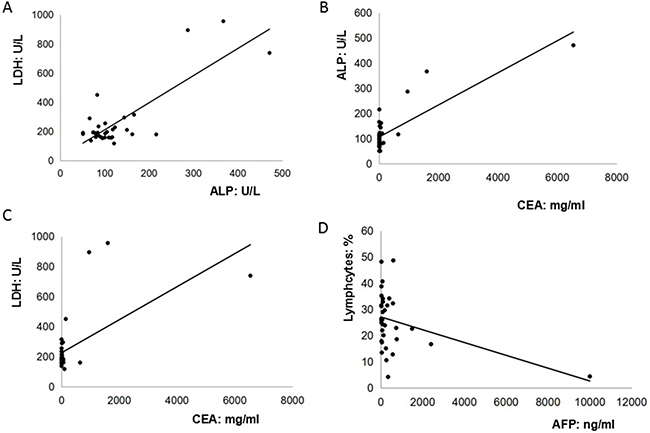 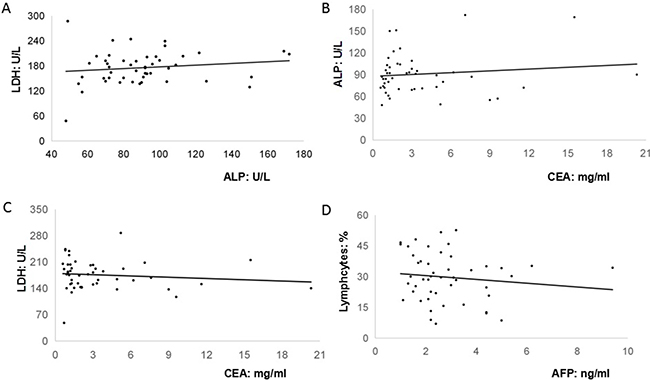 Sano T et al. reported that AFP-producing tumors occupied 1.6% among GC patients. Of them, 79% were nodal metastasis and 53% were liver metastasis. Preoperative serum AFP levels were not associated with tumor size, disease stage, depth of invasion or survival [11]. Herein, our study displayed relatively lower incidences of AFP-producing GC (1.26%), nodal metastasis (57.1%), and liver metastasis (14.3%). Pre-operative serum AFP levels could not represent any tumors’ characteristics such as tumor size, disease stage, and pathological status. Furthermore, synchronous or metachronous features were observed in clinic based on a relative large-scale study [4]. Thereafter, novel characteristics of AFP-producing GC were prospectively explored and analyzed.

With respect to those patients with serum AFP greater than 300 ng/mL, pronouncedly poorer 1-, 3-, and 5-year survival rates were observed [3]. However, in our present study thirteen cases with serum AFP greater than 250 ng/mL successfully received radical gastrectomy surgeries accounting for their clinical stages. Therefore, earlier detection by using endoscopy and biomarkers is empirically required to improve the diagnosis and therapies for AFP-producing GC.

In addition, past studies had shown that ABO genotype was closely related with gastric cancer development [13–15]. Presence of the B allele indicated a significant lower risk of noncardia GC [13]. Our study exhibited a consistent finding on non-AFP-GC patients, which is a significant association between blood type A and gastric cancer [14]. Although decreased risk of gastric cancer was found in blood type O positive among common GC patients by a meta-analysis [15], our present study firstly unveil that blood type O (15 cases, 42.8%) positive were predominantly observed among AFP-GC patients.

Limitations of our present study

The rate of detection of early gastric cancer is relatively low in China, which is similarly observed in the western countries. Most of AFP-producing GC cases cannot be subject to gastrectomy surgeries. Therefore, our present study on these limited AFP-producing cases is not sufficient to prove the subsequent issues. For instance, large data on more cases are required to extrapolate our findings such as the correlations among aforementioned biomarkers. A rise of postoperative serum AFP level normally indicates tumor recurrence, whereas normal serum AFP level cannot exclude recurrent tumor [11]. It is undefined well whether pre- or post-operative peripheral AFP levels are positively associated with patients’ prognosis and survival. Although past studies exhibited various post-operative adjuvant chemotherapy regimens such as 5-fluorouracil, irinotecan, cisplatin, docetaxel, methotrexate, paclitaxel, mitomycin C or tegafur/uracil, no data displayed their advantages and differential survivals [11]. Optimal chemical regimens cannot be analyzed for AFP-producing GC particularly for those cases with high levels of peripheral AFP. Furthermore, H. Pylori infection was not detected in each patients and this data are missing in our present study. Therefore, the relationship between H. Pylori infection and AFP-producing GC could not be studied. All these research issues require more international collaborations and further investigations.

From January 2012 to November 2016, 2,773 patients were searched in our database and primary gastric adenocarcinoma was diagnosed by histology at the Department of Surgery in the Second Affiliated Hospital of Zhejiang University School of Medicine. Preoperative conventional serum tumor biomarkers were tested including AFP CA19-9, CEA, CA125 in all inpatients. Among these GC patients, thirty-five had an elevated serum level of AFP (> 20 ng/mL).Forty-eight non-AFP GC patients were randomly selected as control group. Their serum level of AFP was lower than 20 ng/mL.Patients with primary hepatic diseases were excluded from our analysis. All these patients routinely received abdominal ultrasound, endoscopic examination, and computed tomographic scan to comprehensively evaluate the tumor parameters (size, location, and invasion depth) as well as the status of liver and lymph node metastasis. Staging was determined according to the American Joint Committee on Cancer (AJCC) TNM Staging Classification for Carcinoma of the Stomach (Seventh Edition, 2010) [8]. Data were achieved from patients’ pre-/post-operative and pathological reports. The raw data is publicly available upon request except patients’confidentiality.

Serum assays for AFP and CEA

The collected data were processed by the GraphPad Prism 5 software. Correlation analysis and student’s T-test were performed for the analysis of data. Demographic data were analyzed by descriptive statistics. All the tests were two-sided and statistical difference was accepted as p < 0.05.

The aggressive biological features of AFP-producing GC are closely associated with abnormality of other tumor biomarkers and decrease of the proportion of peripheral lymphocytes, implying that post-operative increase of peripheral lymphocytes might benefit GC patients. Combined use of multiple biomarkers is of significance in comprehensive evaluation of AFP-producing GC patients and assessment for those with high risk of cancer recurrence.

All authors confirm that our research complies with national guidelines for retrospective studies.

All co-authors consent to publish this manuscript.