Dose age affect the efficacy of molecular targeted agents in the treatment of hepatocellular carcinoma: a systematic review and meta-analysis

Hepatocellular carcinoma (HCC) ranks the fifth most prevalent cancers worldwide, and is the second most common cause of cancer-related death, with an estimated 748, 300 new liver cancer cases and 695, 900 cancer deaths occurred worldwide in 2008 [1]. The incidence of HCC increases with age and this rate is expected to continue to increase in the upcoming years as the society continues to age [2]. Additionally, HCC usually develops in patients with hepatitis B virus infection, hepatitis C virus infection, or alcoholic liver disease, which develops over a long period of time [3, 4]. And the widely use of anti-viral therapy might further delay the development of HCC. As a result, HCC is generally diagnosed in middle-aged and elderly populations, and management of HCC in elderly patients is becoming a global issue [3, 5].

During the past decade, the emergence of molecularly targeted agents (MTAs) has provided a new promise treatment for HCC. Until now, sorafenib is the only systematic treatment approved by FDA for use in HCC patients [6–8]. Additionally, several novel MTAs have been extensively assessed in clinical trials [9–12]. However, as the stringent enrolment criteria for patients in prospective trials, the enrolled elderly patients in clinical studies are not entirely representative of the overall elderly patient population. In addition, treatment of HCC in older patients may be complicated by several comorbid conditions and greater concomitant medication use compared with younger patients [2, 13]. Other factors such as sensitivity to the toxicity of chemotherapy or molecular targeted agents may also require special consideration. As a consequence, clinical data obtained in a younger population cannot be automatically extrapolated to the great majority of non-selected elderly patients with HCC.

Currently, the concept of “elderly” has become more difficult to define. In general, the chronological age of 65 years- roughly equivalent to retirement age – is currently accepted as a threshold to define an “elderly” person. As the elderly HCC population increases, it is urgently needed to define the best treatment strategy for these patients. In the present, we assess the efficacy of MTAs in the treatment of elderly HCC patients by using age cutoffs of 65 years to determine whether ageing might impact on efficacy of MTAs in this setting.

The methods would be described in four steps: definition of the study outcomes, selection of studies, data extraction, and the description of the statistical methods used.

The Pubmed, Embase, and Cochrane Library electronic databases were search to identify relevant studies of molecular targeted agents as second treatment for advanced HCC (published before December January, 2017). The search was limited to human studies and randomized controlled trials (RCTs). No language restriction was imposed. If more than one publication was found for the same trial, the most recent was considered for analysis.

Two authors independently extracted the data from included trials. We conducted this meta-analysis based on the Preferred Reporting Items for Systematic review and Meta-Analysis (PRISMA) statement (Supplementary Table 1) [14]. Disagreements between investigators were resolved by discussion and consensus. A standardized Excel file was used for data extraction. The following data were extracted: first author, publication year, the number of enrolled patients and elderly patients, median age, hazard ratios (HRs) with 95% confidence intervals (CIs) for OS and PFS in elderly patients.

Statistical analysis of the overall hazard ratio (HR) for OS and PFS was calculated using Version 2 of the Comprehensive MetaAnalysis program (Biostat, Englewood, NJ). PFS and OS were considered as time-to-event variables, and therefore were expressed as HRs with 95% CIs for each study. HR > 1 reflected more deaths or progression in MTAs-containing regimens group, and vice versa. Heterogeneity across the studies was assess by using the χ2-based Q statistic [15]. The I2 statistic was also calculated to quantitatively evaluate the degree of inconsistency between trials. We used the Begg and Egger tests to assess the presence of publication bias [16]. Study quality was roughly assessed by using the Jadad five-item scale [17]. All p-value of less than 0.05 was considered statistically significantly.

Our search yielded 230 clinical studies relevant to MTAs in HCC patients. After reviewing the title or abstract, a total of 8 prospective randomized controlled trials were included for analysis, included 1 phase II trials [18] and 7 phase III trials [19–25]. The flowchart of the search strategy is shown in Figure 1. A total of 4,231 patients were included in the present study. The characteristics of patients and studies were listed in Table 1. The clinical characteristics were generally balanced between the intervention and control arm. The quality of each included study was roughly assessed according to Jadad scale, the median Jadad score of the included studies was 5 (range 3–5). 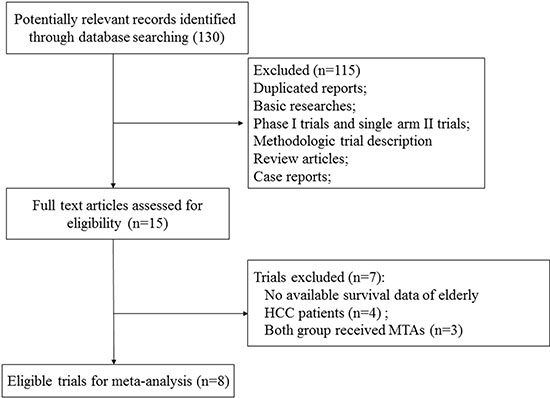 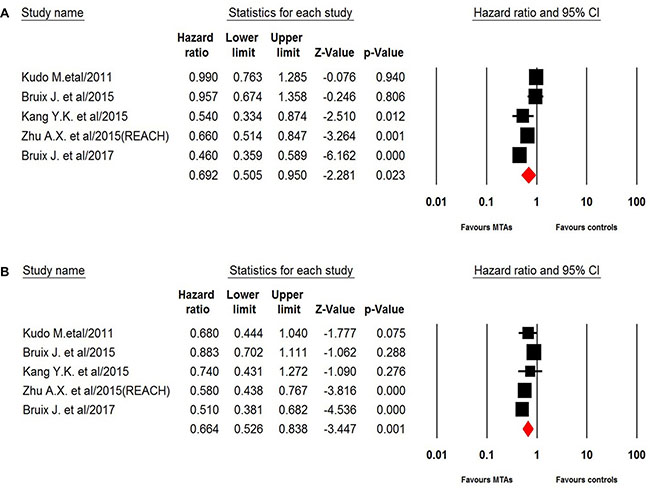 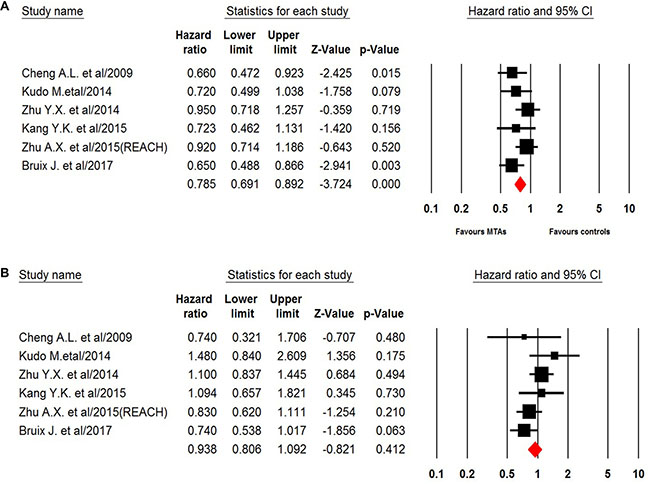 In the past years, the mechanisms of hepato-carcinogenesis have been elucidated, and the involvement of a number of pathways, including angiogenesis and dysregulated cell cycle control, have been demonstrated, which leads to the introduction of some novel agents. Indeed, some of these MTAs represent the most promising treatment strategy to improve outcome for patients with advanced HCC. A previous meta-analysis conducted by Niu M. et al. [26] showed that the use of targeted therapies in HCC patients significantly improved survival in comparison with placebo. However, there is limited data specifically focusing on the efficacy of targeted agents in elderly patients with HCC, and most of these published data are retrospective studies with controversial results. For example, Wong et al. [27] reported that the efficacy of sorafenib in elderly patients (≥ 70 year) was comparable to that of young patients (median OS, 5.32 versus 5.16 months), and they also found that there were no differences in grade 3 or 4 toxicities between elderly and non-elderly patients. Similarly, Costanzo et al. [28] also found that there were no significant differences in OS and time-to progression between elderly and non-elderly HCC patients. Conversely, several investigators have advised against the use of sorafenib in elderly HCC patients. Morimoto et al. [29]. found that older age was a significant prognostic factor for poorer survival in a multivariate analysis (HR 0.237, p = 0.018). In addition, treatment discontinuation as a result of sorafenib was more frequent in elderly HCC patients (41.7%) when compared to non-elderly patients (15.0%). In consistent with these results, Edeline et al. [30] also found that definitive cessation of sorafenib treatment was observed more frequent in elderly group than in non-elderly group (45.1% versus, 24.4%, p = 0.014). As a result, the role of MTAs in the treatment of elderly patient with HCC remains undetermined, we thus perform the present study to investigate the overall efficacy of MTAs in the treatment of this population group.

Our systematic review is, as far as we known, the first systematic review to specially assess the efficacy of MTAs in the treatment of elderly HCC patients. Our study includes a total of 4, 231 HCC patients from eight RCTs were included for analysis, with 1,607 patients aged ≥ 65 years and 2, 624 patients aged < 65 years. Our results demonstrate that the use of MTAs improves PFS in both younger (HR 0.69, 95% CI: 0.51–0.95, p = 0.023) and elderly (HR0.66, 95% CI: 0.53–0.84, p = 0.001) patient. In addition, the use of MTAs significantly improves overall survival in younger HCC patients (HR 0.79, 95% CI: 0.69–0.89, p < 0.001), but not for elderly HCC patients (HR 0.94, 95% CI: 0.81–1.09, p = 0.41). However, there is significantly heterogeneity among included studies when analyzing the above endpoints. One possible explanation for this heterogeneity is that our study pooled studies across different lines of therapy investigating MTAs with different modes of action (ramucirumab, regorafenib, axitinib, everolimus, sorafenib, and axitinib). The findings of this study suggest that the treatment effect of MTAs on OS might be different in younger and older HCC patients undergoing first-line or second-line treatment, but not for PFS benefit. Further studies are still needed to assess the role of MTAs in the treatment of elderly HCC patients.

Several limitations exist in this analysis. First of all, this is a meta-analysis at study level. We could not obtain individual patient data from the publication, thus we could not incorporate patients variables into the analysis. For instance, elderly patients are more likely to have comorbid conditions, and we are unable to investigate whether the survival benefit is similar in elderly patients with or without comorbid conditions. Second, none of the included trials report the toxicities of MTAs in elderly patients. Thus, we could not answer whether the use of MTAs in this patient population would increase the toxicities in comparison with controls. Thirdly, there is considerable heterogeneity among the included studies, because different targeted agents are included for analysis. Fourthly, there is still no general agreement on the definition of the elderly population. In the present study, all for the included trials define elderly patients as more than 65 years. Finally, in the meta-analysis of published studies, publication bias is important because trials with positive results are more likely to be published and trials with null results tend not to be published. Our research detects no publication bias using Begg and Egger tests for OS but not for PFS. In the present, we detect no publication bias using Begg and Egger tests for OS.

The findings of this study suggest that the treatment effect of MTAs on OS might be different in younger and older HCC patients undergoing first-line or second-line treatment, but not for PFS benefit. Further studies are needed to clearly investigate the role of MTAs in the treatment of elderly HCC patients.

J.D. and M.L. were both the corresponding authors to this work. J.D. and M.L. designed the research, revised the manuscript and supervised all the work. Y.M. H.H. and Y.T. took part in designing the research, and wrote the manuscript. D.L. and J.D. searched the studies, collected the eligible studies. Z. X. involved the disagreements between Y. T. and D.L., All authors read and provided suggestions during manuscript preparation.