Gastric cancer (GC) is a frequent malignant tumour and is one of the primary causes of tumour-associated deaths in the world. In 2012, 951,600 patients were diagnosed with GC, accounting for 8% of cancer cases, and 723,100 patients died of GC, accounting for 10% of cancer deaths [1]. Recently, in many Western countries, the incidence of stomach cancer has gradually decreased. However, in Eastern Asia, the incidence and mortality rate of GC is rising, especially in China [2–4]. Gastric cancer has become a major public health problem, but the mechanism of carcinogenesis in gastric cancer is still unclear. It has been generally accepted that occurrence of stomach cancer is a multistep, complex and multifactorial process that involves diverse risk factors. Thus far, many environmental risk factors including drinking, smoking, Helicobacter pylori infection and micronutrient deficiency have been identified. Although people are exposed to the above factors, not all of them will develop GC, indicating that genetic factors are involved in the development of GC [5]. Single nucleotide polymorphisms (SNPs), the most frequent type of genetic mutations, may contribute to an individual’s susceptibility to GC.

A SNP in the aldehyde dehydrogenase-2 (ALDH2) gene, rs671, is highly prevalent among the East Asian population and causes decreased ALDH2 enzyme activity which may result in an inability to eliminate acetaldehyde. Acetaldehyde, a metabolite of alcohol, is known to increase cancer susceptibility [6]. Polymorphisms of the human ALDH2 gene, which is located on chromosome 12q24, could alter blood acetaldehyde concentrations after alcohol intake [7]. The rs671 polymorphism (also called Glu487Lys) has been the most commonly investigated [8]. Several published studies that included East Asian populations have shown that the ALDH2 rs671 G>A polymorphism is associated with an increased risk of stomach cancer [9–11], and studies from Japan and Korea have indicated a possible interaction between alcohol intake and the ALDH2 rs671 polymorphism in the incidence of stomach cancerr [9,10]. ALDH2 polymorphism genotype frequencies are diverse among different ethnic populations [12]. The frequency of the ALDH2 rs671 A allele is very high in East Asians, and has not been observed in Africans, Caucasians, and Southeast Asians [13]. However, in East Asians, however, the frequency of the ALDH2 allele also varies among the Chinese, Koreans, and Japanese [14].

Figure 1 shows a flow diagram of the study search process in our meta-analysis. The initial literature search identified 67 studies based on the selection strategy. Fifty-six studies were left after the removal of duplicate studies. Thirty-five studies were excluded after reviewing the titles and abstracts. Among these 35 studies, 20 were not relevant studies, 5 were meta-analyses or reviews, 6 were not relevant to GC, 3 were not case-control studies, and 1 was not a human study. The full text of the rest of the studies was reviewed, and 9 of these full-text studies were removed for the following reasons: 4 studies did not have sufficient data, 1 had data covered by another study, 1 had data that overlapped with another, and 3 were not relevant to the ALDH2 rs671 G>A polymorphism. Finally, 12 case-control studies about the ALDH2 rs671 G>A polymorphism and GC risk were eventually included for further analysis, encompassing a total of 6,421 cases and 8,832 control subjects [9, 10, 15, 19–27]. Table 1 shows the characteristics of eligible studies. All the cases were histologically confirmed in each of the included studies. All 12 case–control studies were performed with Asians and were published from 2009 to 2017. Among these studies, 8 were conducted in China, 2 were in Japan and 2 were in Korea. Six studies were hospital-based and six were population-based. All control subjects in the selected studies were within Hardy-Weinberg equilibrium (HWE), except for those in Yuan’s study [21]. The relationship between the ALDH2 rs671 G>A polymorphismand GC risk in subgroups according to drinking status, sex and smoking status was assessed in 7, 2, and 2 studies, respectively. However, the author provided only the GG and GA + AA genotype counts of cases and controls without specific information on either the AA or GA genotype; thus, the dominant model was employed to assess the association between the ALDH2 rs671 G>A polymorphism and GC risk in the stratified analysis according to drinking status, sex and smoking status. The selected articles, assessed by the Newcastle-Ottawa Scale (NOS) score, ranged from 7 to 8 (Supplementary Table 1). The methodological quality of the included studies was reliable. 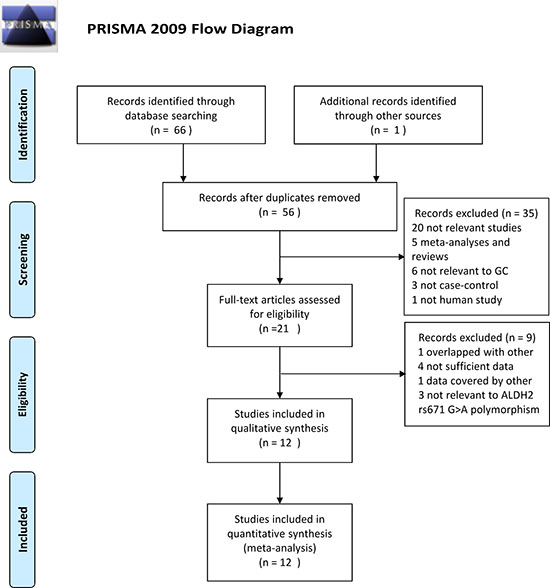 Figure 1: Flow chart of studies selection in this meta-analysis.

Table 1: Characteristics of eligible case-control studies included in this meta-analysis 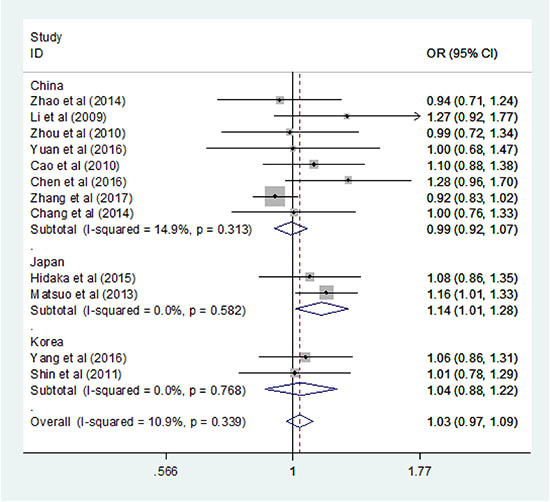 Figure 2: Forest plots of the ALDH2 rs671 G > A polymorphism and gastric cancer risk in subgroup by country (allele model: A vs. G). 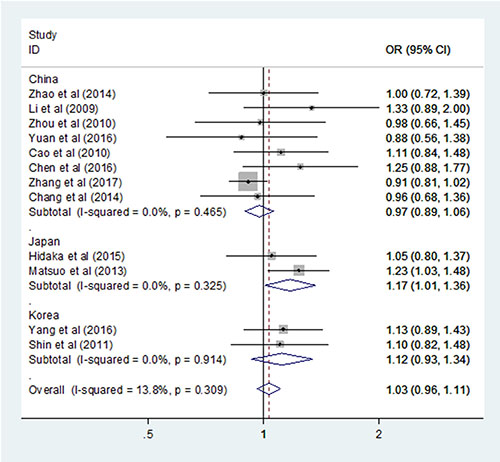 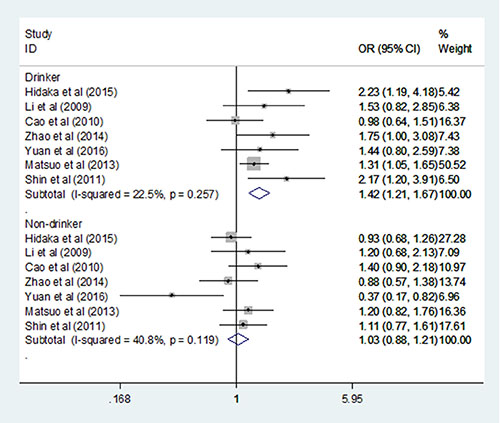 Table 4: Association between ALDH2 rs671 G>A polymorphism and sex, smoking status and drinking status of the gastric cancer patients based on dominant models

All the included studies were in accordance with HWE in their controls except Yuan’s, as shown in Table 1. To observe the impact of each single study on the pooled risk estimates, sensitivity analysis was performed with the leave-one-out cross-validation method. When removing any individual article from the analysis, the overall outcomes did not significantly change in the pooled ORs of the overall GC risk, indicating that our meta-analysis is credible and reliable (Figure 5, data not shown). 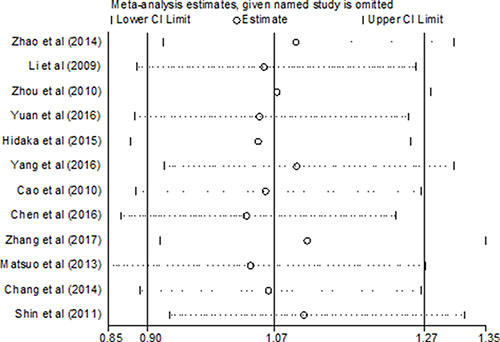 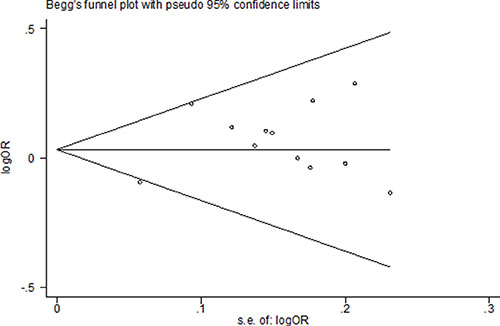 ALDH2 is the main enzyme responsible for the metabolism of acetaldehyde, which increases cancer risk [28]. Several mutations have been confirmed in the human ALDH2 gene, including rs671 G>A, rs16941667 C>T, rs968529 C>T and rs886205 T>C [16, 29]. Among these alleles, the ALDH2 gene rs671 G>A, namely, the Glu504Lys polymorphism, is the most widely investigated and potentially functional. Several genome- wide association (GWA) studies have demonstrated that the ALDH2 gene rs671 G>A polymorphism can significantly increase the risk of some tumours, including upper aerodigestive tract (UADT) cancer and oesophageal squamous cell carcinoma (OSCC) [30, 31]. In recent years, an accumulation of published studies have investigated the relationship between the ALDH2 rs671 G>A polymorphism and the risk of GC; however, the results are still conflicting [9, 10].Therefore, to make a more accurate assessment of the correlation, we decided to perform the present meta-analysis on all eligible case-control studies.

Although our study is the most up-to-date meta-analysis and included all eligible case-control studies until July 2017, similar to other studies, our study shares several flaws with other studies in the following aspects. First, although no obvious publication bias was shown in our study, some bias is unavoidable because only published studies were included. Some published studies in accordance with the conditions may not be included. Second, as a systematic summary of the data, our study did not demonstrate an association at the level of basic experiments. However, due to the finite number of selected studies and samples, the published data included in our study did not have a sufficiently large sample size for comprehensive analysis. Third, the selected papers in our study were mostly from the Chinese population. The number of case-control studies in certain stratified analyses was too small to acquire a reliable association. Finally, only the dominant model was applied to assess the relationship when stratifying by sex, smoking status and drinking status due to insufficient data. More original data from a large sample of multiple centres is needed to confirm the relationship between the ALDH2 rs671 G>A polymorphism and GC susceptibility.

In conclusion, our meta-analysis showed no association between the ALDH2 rs671 G>A polymorphism and GC risk in Eastern Asian populations. The ALDH2 rs671 G>A polymorphism and alcohol drinking had a synergistic interaction for GC risk. Data from a large sample of further investigations are still needed to confirm the roles of ALDH2 in GC and validate these associations.

To screen out eligible studies, we searched relevant studies in the Embase, PubMed, Wang Fan and China National Knowledge Infrastructure (CNKI) databases. No language limitation was used in the search and the last search was updated on July 16, 2017. The following search key terms were used: (‘ALDH2’ or ‘aldehyde’ or ‘dehydrogenases-2’) and (‘gastric carcinoma’ or ‘gastric cancer’ or ‘stomach cancer’) and (‘polymorphisms’ or ‘genotype’ or ‘polymorphism’). We also studied the reference lists of the included studies and recent reviews.

The eligible studies included in this meta-analysis must have provided the following information: (1) the relationship between the ALDH2 rs671 G>A polymorphism and GC risk; (2) a case–control study; (3) sufficient data for estimating an OR and the corresponding 95% CI; and (4) GC diagnoses and the sources of cases and controls were clearly described in the study. Studies were excluded for the following reasons: (1) duplicate data; (2) insufficient data; and (3) abstracts, reviews, comments and editorial letters. The largest published studies were selected if the same or overlapping data were used.

According to the above inclusion criteria, two investigators independently extracted information from all collected studies. Discrepancies were solved by discussion among all investigators. We collected the following characteristics from each eligible study: the first author, year of publication, ethnicity, country, study design, source of cases, genotyping methods, number of cases and controls, minor allele frequency (MAF) in controls, matching variables, genotypes, source of the control group (population or hospital-based controls), evidence of HWE in the control group, and others.

Two investigators independently assessed the quality of the included studies using the NOS. The NOS was performed to assess the study quality based on the following aspects: selection, comparability, and exposure situation in case-control studies. Rating scores ranged from 0 to 9. Studies with a score higher than seven were considered to be of good quality (Supplementary Table 1).

HWE in the controls was assessed for each study with a goodness-of-fit test (Chi square or Fisher’s exact test). HWE was considered to be in significant disequilibrium when P was less than 0.05. We assessed the strength of the association between the ALDH2 rs671 G>A polymorphism and GC susceptibility using ORs with 95% CIs in the co-dominant model (AA vs. GG and GA vs. GG), recessive model (AA vs. GA+GG), dominant model (GA+AA vs. GG), and allele model (A vs. G). We conducted subgroup tests according to country, source of controls, sex, smoking status and drinking status. The significance of pooled ORs was tested using Z test. Differences were considered statistically significant when P was less than 0.05. The I2 test was used to explore the heterogeneity among eligible studies [34]. The random (DerSimonian-Laird method) effect model was used to calculate the pooled OR when the I2 value > 50% and was considered to represent significant statistical heterogeneity [35]. The fixed (Mantel-Haenszel method) effect model was used to measure the pooled OR when the I2 value < 50% and was considered to represent less heterogeneity [36]. To explore the influence of each included study, a sensitivity analysis was performed by excluding one study at a time and then examining the pooled OR by repeating the meta-analysis. Publication bias was assessed using Begg’s rank correlation method and Egger’s weighted regression method (P < 0.05 was considered statistically significant). Funnel plots were also used to illustrate the publication bias [37, 38]. All statistical analyses were performed using STATA 12.0 soft-ware (version 12.0; STATA Corp. College Station, TX, USA) using two-tailed P-values. To adjust for multiple comparisons, the Bonferroni correction method and FDR were applied. The power of the meta-analysis for each polymorphism to detect some effect size was estimated according to the method recommended by Hedges and Pigott with P < 0.05 considered as statistically significant [39].

We are indebted to all the people who helped with our study.

The authors declare that there were no conflicts of interest.