4Department of Surgery and Oncology, University of Palermo, Palermo, Italy

7Department of Obstetrics and Gynecology, University of Palermo, Palermo, Italy

Several studies in the last years demonstrated the better surgical outcome of laparoscopic approach to adrenal gland. Laparoscopic surgery is more difficult to learn and requires different psychomotor skills than open surgery, especially with regard to complex maneuvers requiring precision and dexterity. The development of robotic platform with three-dimensional vision and increased degrees of freedom of the surgical instruments has the aim to overcome these problems. We performed a systematic literature review with meta-analysis to evaluate preoperative data and surgical outcomes of robotic adrenalectomy compared with laparoscopic technique. In September 2016 we performed a systematic literature review using the Pubmed, Scopus and ISI web of knowledge database with search term “robotic adrenalectomy”. We identified 13 studies with eligible criteria that compared surgical outcomes. This present systematic review with meta-analysis includes 798 patients: 379 underwent to robotic adrenalectomy (cases group) and 419 to laparoscopic adrenalectomy (controls group). There were no significant differences between the two groups of patients respect to age, gender, laterality and tumor size. BMI instead was significant lower in the robotic group. In this group we found also patients with higher incidence of previous abdominal surgery. The results from operative time demonstrated lower operative time for laparoscopic group but there were no significant differences with robotic group. Robotic adrenalectomy showed a significant lower blood loss. Robotic adrenalectomy is a safe and feasible technique with reduced blood loss and shorter hospital stay than laparoscopic adrenalectomy. Laparoscopic approach seems to be a more rapid technique when comparing to robotic technique, although recent studies demonstrate a significant operative time reduction in robotic group with the learning curve improvement and the development of new surgical technology.

Since the first description by Gagner in 1992 [1] laparoscopic adrenalectomy (LA) became the standard treatment for adrenal removal. Several studies in the last years demonstrated the better surgical outcome of laparoscopic approach to adrenal gland such as decrease of the perioperative morbidity, lower complication rate, less operative blood loss, less perioperative pain and short hospital stay compared with open adrenalectomy for several indications [2–5]. Some questions remain about treatment of large adrenal masses with increased risk of adrenocortical carcinoma (ACC) [6]. Laparoscopic surgery is more difficult to learn and requires different psychomotor skills than open surgery. In fact, the surgeons have to work in a three-dimensional space, but are guided by two-dimensional images. This limitation can be challenging, especially with regard to maneuvers requiring precision and dexterity [7]. For this reason in the last period the use of a new generation three-dimensional (3D) HD laparoscopic system can improved quality of vision [8, 9, 10], but as the current laparoscopic technology is limited in regard to the maneuverability and inferior ergonomic design of instruments, natural surgical strain, tremors and the counterintuitive movements. The development of robotic platform has the scope to overcome these problems. In 1999 Piazza et al. [11] published the first case of robot-assisted right adrenalectomy in a patients with Conn’s syndrome using the ZEUS AESOP (Computer Motion, Inc., Santa Barbara, CA). With the introduction of the da Vinci system (Intuitive Surgical, Sunnyvale, CA, USA) several series of robotic surgery have been reported. In recent years robotic adrenalectomy (RA) has received attention to the perceived benefits of this technology with three-dimensional vision, the elimination of surgeon’s tremor and increased degrees of freedom of the surgical instruments, a comfortable sitting position. Nonetheless, robotic surgical operations seem to have longer operative time and more expensive costs compared with traditional laparoscopic surgery. In recent years several authors described cases series of robotic approach to adrenal surgery compared with traditional LA and demonstrated safety and feasibility of robotic procedure with different results in term of operative time, blood loss, conversion rate, complications and length of hospital stay. Nevertheless, these reports did not consider short and long-term outcomes so we performed a systematic literature review with meta-analysis to compare preoperative differences and surgical outcomes between RA and LA.

In September 2016 we performed a systematic literature review using the Pubmed, Scopus and ISI web of knowledge database to identify all studies that compared RA and LA. The search was done using the term “robotic adrenalectomy”. We considered only publications in English language that compared robot-assisted and laparoscopic adrenalectomy. Conference abstracts, cases series, non comparative studies and comparison with open surgery were not included in this meta-analysis. When two or more studies were published by the same authors and/or institution with a potentially overlapping patient sample and with the same outcome we considered the most recent. Three independent reviewers completed this process with analysis of cited references from the selected articles to identify other significant articles.

The level of evidence of included studies was rated according to the criteria of the Centre for Evidence-Based Medicine [12]. The methodological quality of all nonrandomized studies was assessed using the Newcastle-Ottawa Scale [13]. A score of 0–9 may be given to individual studies. Studies achieving a score of 7 or more indicated a higher quality . Three reviewers (AA, GR and GDB) independently assessed the quality of the study and solved disagreement by consensus. We identified 13 studies [14–26] with eligible criteria (Figure 1) that compared RA versus LA and clinical outcomes. 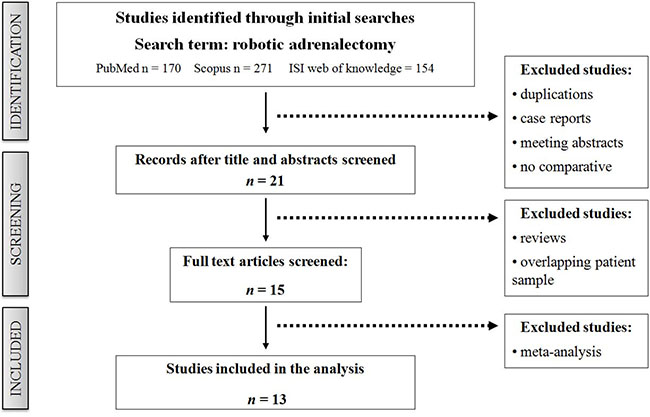 Figure 1: Systematic literature review to identify all studies that compared RA and LA.

A meta-analysis was performed to identify clinical outcomes and potentially surgical advantages of RA when compared with traditional LA. This analysis follows the recommendations of the Cochrane Collaboration using R Statistical Software (R ver 3.3.1, R Foundation for Statistical Computing, Vienna, Austria). Odds ratio (OR) was used for dichotomous variables and mean difference or standardized mean difference for the continuous parameters. All outcomes were reported with 95% confidence interval (95% CI). However some studies did not report any of these parameters, but presented continuous data as medians. In these cases we made an approximate transformation using Hozo methodology [27]. An OR significantly < 1 favored RA, whereas an OR significantly > 1 favored LA. All P values < 0.05 was considered statistically significant. Pooled estimates were calculated with the fixed-effect model (Mantel-Haenszel method) [28] if no significant heterogeneity was detected; otherwise, the random-effect model (DerSimonian-Laird method) was used [29]. The Cochrane chi-square test (Q) and inconsistency (I2) were used to evaluate the heterogeneity among studies.

From our systematic literature review we identified 13 studies that compared RA and LA including 798 patients. 379 underwent to RA (cases group) and 419 to LA (controls group). 8 studies were prospective, but only one was a randomized controlled trial. 5 studies instead were retrospective. In Table 1 we showed studies characteristics, year and country of publication, period of study interval and level of evidence. We divided the variables analyzing in three groups: preoperative; operative and surgical outcomes. We considered also follow up and costs of RA but there was a lack of data regarding these aspects. 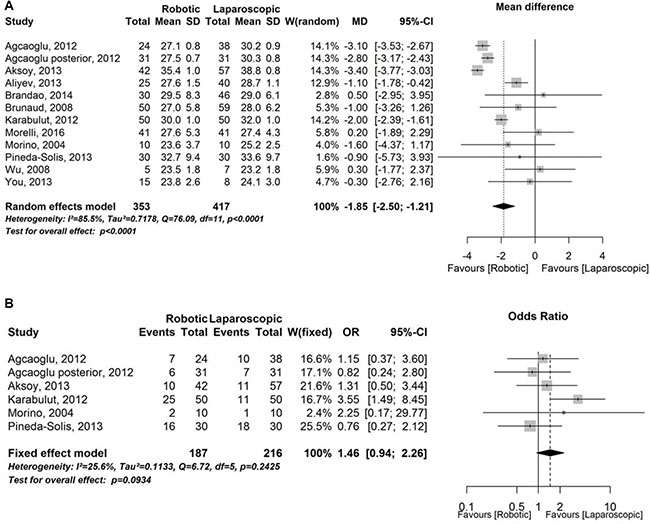 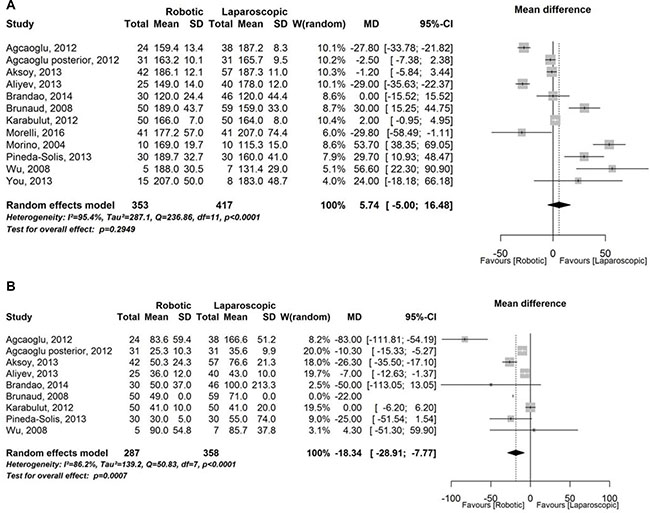 There were no differences in term of pathological results. Overall complications and conversion rate were expression of surgical safety and seemed to be favoring of RA but with no significant differences (Figure 4A–4B). Length of hospital stay was significant lower in robotic arm (Figure 4C). In this study we tried to analyze also follow-up and costs of different procedures, robotic and laparoscopic, but there was no systematic data compilation in eligible articles so we were not able to perform a rigorous meta-analysis. 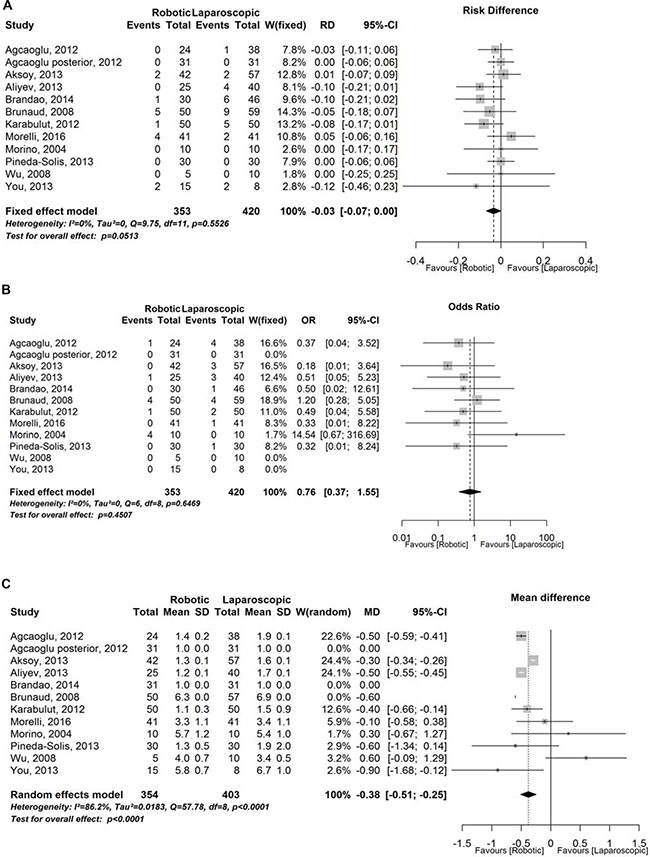 This study is a systematic literature review with meta-analysis, but we must consider some limitations. The studies reviewed are retrospective and prospective, but only one is a randomized controlled trial that shows initial data of limited number of patients. The use of retrospective studies increases the possibility of selection bias with doubts in interpreting results. On the other hand the authors have different surgical experience and this can reflect different outcomes. Most of the studies take into consideration only benign adrenal pathology with no long-term follow-up. In literature we find other reviews and meta-analysis regarding initial, limited experience with robotic adrenalectomy. The reason for a new meta-analysis is due to rapid evolving of robotic technology and increased experience of dedicated surgeon with improved clinical outcomes. This present meta-analysis includes 798 patients: 379 underwent to RA (cases group) and 419 treated with LA (controls group). Our aim is that to evaluate demographic characteristics, operative parameters and clinical outcomes between RA and LA. RA is a safe and feasible technique with reduced blood loss and shorter hospital stay than LA. Laparoscopic approach seems to be a more rapid technique when comparing to RA, although recent studies demonstrate a significant operative time reduction in RA with the learning curve improvement and the development of new surgical technology and advanced energy source.