Cancer is the second most frequently leading cause that caused over 8.8 million deaths worldwide in 2015 [1], and the World Health Organization predicts 14.1 million people are expected to develop cancer annually [2]. Cancer represents a heavy social health problem and economic burden, and costs on patients. The etiology of cancer involves both genetic and environmental factors. Multiple lines of evidence have demonstrated that benzodiazepine drug use is the risk factors for cancer regardless of laboratory studies or animal studies [3, 4].

Benzodiazepines are the derivatives of 1, 4-benzodiazepines, including diazepam, flurazepam, chlorazepam, oxazepam and triazolam. The main function of benzodiazepine is inducing feelings of calm, drowsiness and sleep, and have been widely used in clinical, mainly to treat anxiety and insomnia. Benzodiazepines has been one of the most commonly used drugs in the general population for nearly 50 years, with the use of older people worldwide ranging from 10 to 42 percent. In the United States, about 6 to 10 percent of adults use benzodiazepines in 2010, while in Europe, some regions have found a higher proportion [5, 6]. Therefore, it is important to evaluate the benzodiazepines drugs safety.

Figure 1 shows literature research and selection. A total of 2304 studies from PubMed, 2638 studies from Embase and 2516 studies from Web of Science. After exclusion of duplicates and studies that did not fulfill the inclusion criteria, 22 studies were chosen, and the data were extracted. These studies were published update to July 2017. 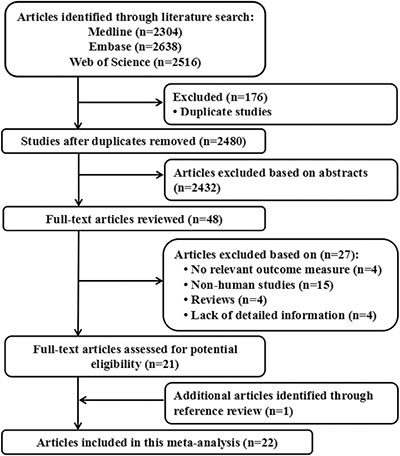 The characteristics of the included studies of benzodiazepines drug use and cancer risk are shown in the Tables 1 and 2. Results in different subgroups were treated as two separate reports. Finally, twenty-seven independent reports from twenty two studies investigated the association between benzodiazepines drug use and cancer risk. Among the selected reports, twenty-two are from Caucasia and five from Asia. A total of 2482625 participants with 312203 incident cases from seven countries were included in this meta-analysis.

Table 1: Characteristics of participants in included studies of benzodiazepine using in relation to risk of cancer

Table 2: Outcomes and covariates of included studies of benzodiazepine using in relation to risk of cancer

Subgroup analysis was performed to check the stability of the primary outcome. Subgroup meta-analyses in study design, study quality, number of participants and number of cases showed consistent findings (Tables 3, 4).

Dose-response between benzodiazepines drug use and cancer risk 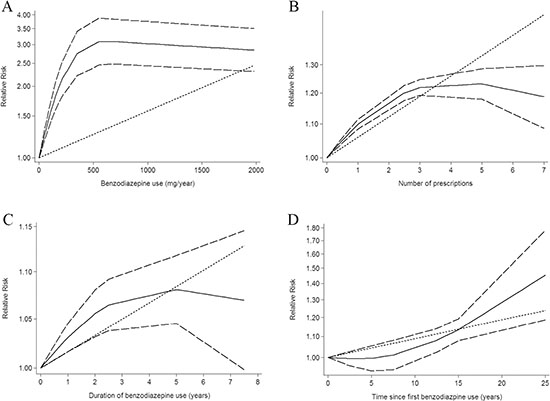 Sensitivity analysis was conducted to assess the stability of the results. The results show the results were stable in Supplementary Figure 1.

Each studies in this meta-analysis were performed to evaluate the publication bias by both Begg’s funnel plot and Egger’s test. P > 0.05 was considered no publication bias. The results show no obvious evidence of publication bias was found in the associations between benzodiazepine drug use and cancer risk (Supplementary Table 1).

Several plausible pathways may reasonable for the relationship between benzodiazepine drug use and cancer risk. The influence of chronic inflammation on cancer development is one possible pathway. Benzodiazepine drug use might increase the levels of inflammation mediators [30], which can increase the risk of cancer by inhibiting apoptosis and stimulating tumor cell proliferation [31]. Simultaneously, the treatment of benzodiazepine drug use before surgery can influence the depolarization of the mitochondrial membrane to inhibit the apoptosis of neutrophil cells, neutrophil apoptosis plays an important role in maintaining the homeostasis of the immune system and prevents damage to the host organs by promoting an immune response [32]. Addition, benzodiazepines are used to enhance the neurotransmitter of γ-aminobutyric acid by interacting with the chlorine ion channel that binds to GABA receptors. Besides as an inhibitory neurotransmitter effect, γ-aminobutyric acid is also thought can regulate cell proliferation and differentiation of brain and peripheral at various stages, and may participate in benign tumor growth in a variety of ways [33, 34]. However, the potential mechanisms of benzodiazepines and tumor growth still remain unclear and controversial.

To our knowledge, this is the first study to identify and quantify the potential dose-response association between benzodiazepine drug use and cancer risk in a large cohort of both men and women. Although, we performed this meta-analysis very carefully, however, some limitations must be considered in the current meta-analysis. First, different sex of population should be included in this meta-analysis to explore the impact of different sex of population on benzodiazepine drug use and cancer risk. Second, we only select literature that written by English, which may have resulted in a language or cultural bias, other language should be chosen in the further. Third, in the subgroup analysis in cancer type, there has no insufficient statistical power to check a dose-response in different cancer type, large data in different cancer type is warranted to validate this association.

In conclusion, our findings underscore the notion that benzodiazepine drug use was significantly associated with cancer risk increment. In the future, large-scale and population based association studies must be performed in the future to validate the risk identified in the current meta-analysis.

This meta-analysis was conducted according to the Meta-analysis Of Observational Studies in Epidemiology (MOOSE) checklist [35].

We included eligible studies to investigate the relationship between benzodiazepines drug use and cancer risk. To develop a flexible, non-linear, r meta-regression model, we required that an eligible study should have categorized into 3 or more levels.

Use standardized data collection tables to extract data. Each eligible article information was extracted by two independent researchers. We extracted the following information: first author; publication year; age; country; sex; cases and participants; the categories of benzodiazepines drug use; the relative risk or odds ratio (OR). We collect the risk estimates with multivariable-adjusted. According to the Newcastle-Ottawa scale, quality assessment was performed for non-randomized studies [36].

Due to different definitions cut-off points in the included studies for categories, we performed a relative risk estimates by increaseper 500mg/year of benzodiazepine using or per 3 prescriptions increment or per 3 year of duration of benzodiazepine using or per 5 year of time since first benzodiazepine use using the method recommended by Greenland, Longnecker and Orsini and colleagues. In addition, using restricted cubic splines to evaluate the non-linear association between benzodiazepines drug use and cancer risk, with three knots at the 10th, 50th, and 90th percentiles of the distribution. A flexible meta-regression based on restricted cubic spline (RCS) function was used to fit the potential non-linear trend, and generalized least-square method was used to estimate the parameters. This procedure treats benzodiazepines drug use (continuous data) as an independent variable and logRR of diseases as a dependent variable, with both tails of the curve restricted to linear. A P value is calculated for linear or non-linear by testing the null hypothesis that the coefficient of the second spline is equal to zero [38].

We use STATA software 12.0 (STATA Corp, College Station, TX, USA) to evaluate the relationships between benzodiazepines drug use and cancer risk. By using Q test and I2 statistic to assess heterogeneity among studies. Random-effect model was chosen if PQ< 0.10 or I2 > 50%, otherwise, fixed-effect mode was applied. Sensitivity analysis was conducted to assess the stability of the results. Begg’s and Egger’s tests were to assess the publication bias of each study. P < 0.05 was considered signifcant for all tests.

Authors have disclosed no conflicts of interest.

36. Stang A. Critical evaluation of the Newcastle-Ottawa scale for the assessment of the quality of nonrandomized studies in meta-analyses. Eur J Epidemiol. 2010; 25:603–5.