Thus, in the same line, the aim of the present study is to elucidate antitumor mechanism of PROS, an arsenic herbal mixture of tetraarsenic hexoxide (PR) and ethanol extract of Oldenlandia diffusa and Salvia miltiorrhiza (OS) in association with angiogenesis and apoptosis in non-small cell lung cancer cells (NSCLCs), since PR showed resistant cytotoxicity in A549 and H460 NSCLCs compared to other cancers such as HCT-116 colon cancer, 786-O renal cancer, PC-3 and DU145 prostate cancers. 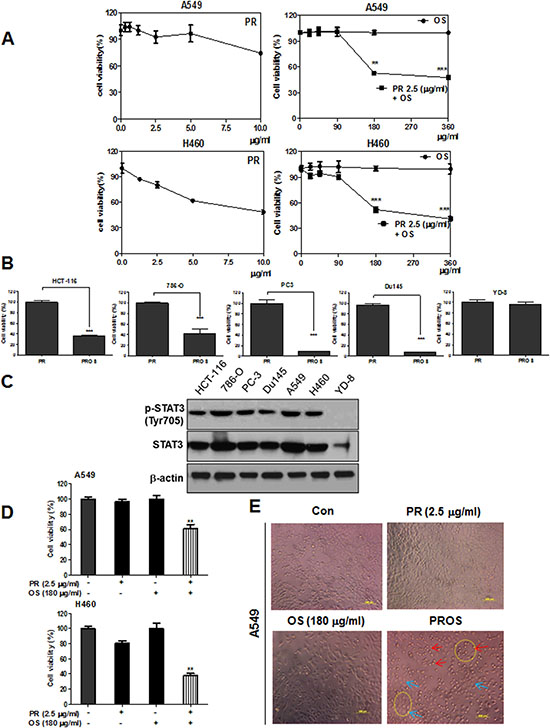 To confirm the apoptotic effect of PROS, cell cycle analysis and DAPI staining were conducted in A549 cells treated by PROS compared to PR or OS alone. PROS increased sub-G1 population, induced S phase arrest to 29.45% compared to PR (8.75%) or OS (8.21%) (Figure 2A) and increased apoptotic bodies compared to PR or OS alone in A549 and H460 cells (Figure 2B). Likewise, PROS attenuated the expression of pro-PARP, Bcl-2, p-ERK (Figure 2C), cleaved PARP and also suppressed the expression of Cyclin E, Cyclin A, CDK2 and E2F1 as cell cycle related genes in A549 and H460 cells (Figure 2D). 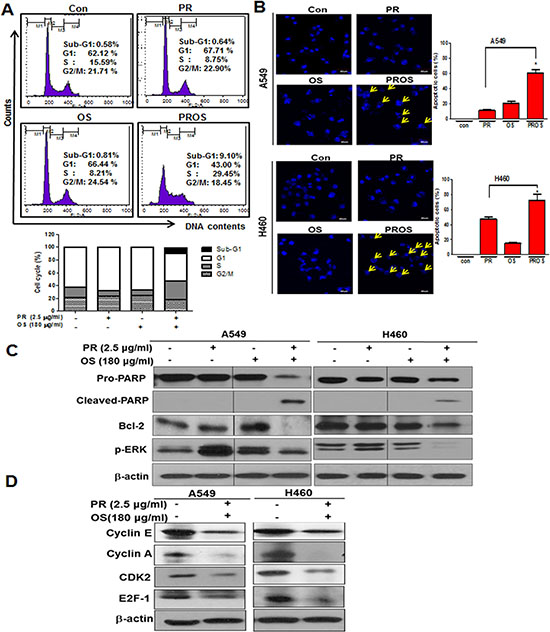 PROS suppressed the expression of p-STAT3, p-ERK, p-Src, p-AKT, COX-2, SOCS-1 and disrupted the binding of STAT3 with CDK2 or VEGF in NSCLCs

PROS reduced phosphorylation of signal transducer and activator of transcription 3 (STAT3) (Tyr705) as a transcription factor in A549 and H460 cells (Figure 3A) and also attenuated the phosphorylation of interleukin 6 (IL-6) activated ERK and STAT3 in STAT3 low level H1299 cells (Figure 3C). Likewise, PROS reduced the cell viability of IL-6-stimulated H1299 cells (Figure 3B). Consistently, PROS reduced the expression of p-Src, p-AKT, cyclooxygenase 2 (COX-2) as survival genes and suppressor of cytokine signaling 1 (SOCS-1) that promotes tumor progression and toll like receptor (TLR) signaling [40] , but not SHP-1, in A549 and H460 cells (Figure 3D). Additionally, IP revealed that PROS attenuated the expression of VEGF and CDK2 and also disrupted the binding of STAT3 with CDK2 or VEGF after the treatment with PROS for 24 h in A549 and H460 cells (Figure 3E), while the score of protein-protein interaction (PPI) between STAT3 and CDK2, STAT3 and VEGF or VEGF and CDK2 were 0.624, 0.945 and 0.443, respectively. 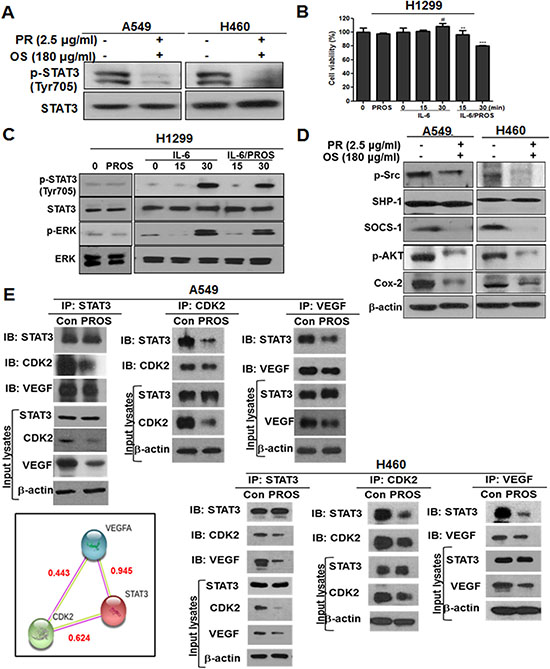 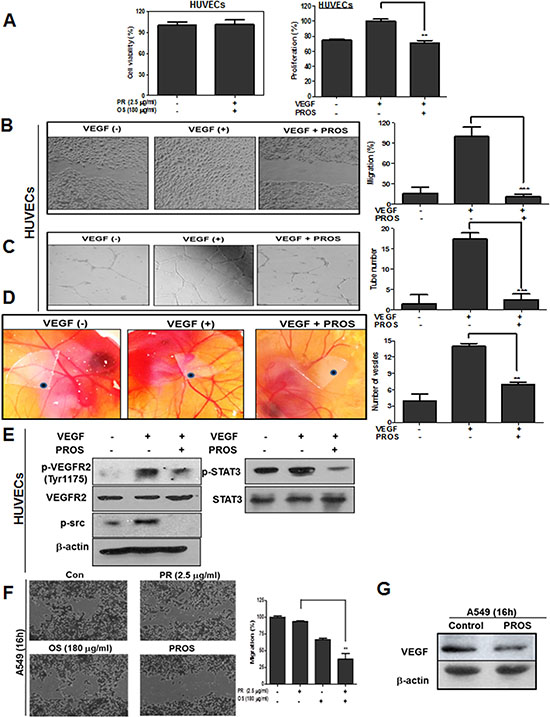 To confirm in vitro antiangiogenic and apoptotic effect of PROS, animal study was conducted in H460 xenograft model. PROS did not affect body weight of mice (Figure 5A) and significantly reduced the tumor volumes (Figure 5B) and weights (Figure 5C) compared to untreated control. Furthermore, immunohistochemistry revealed that the expression of p-STAT3 and VEGF was suppressed and cleaved caspase 3 was activated in tumor sections isolated from PROS treated group mice compared to untreated control (Figure 5D). 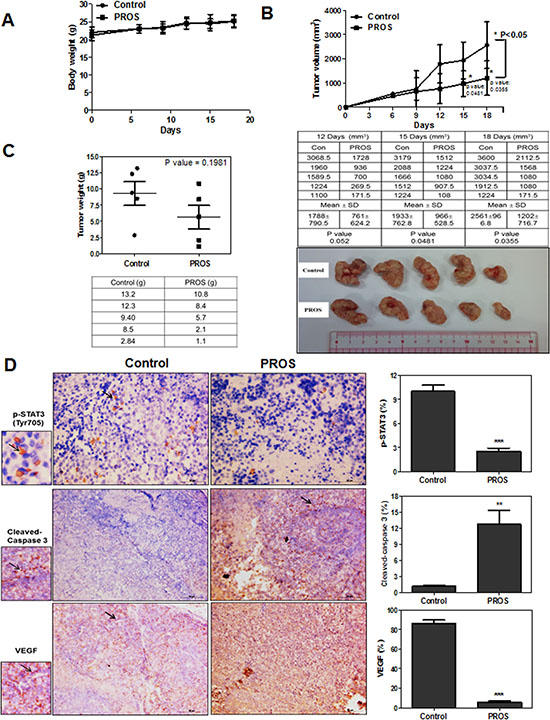 Emerging evidences revealed that arsenic compounds such as asrsenic trioxide (As2O3) [6, 15], tetraarsenic hexoxide (As4O6 or PR) [38, 39] and tetraarsenic tetrasulfide (As4S4) [41, 42] have antitumor effects in several cancers including acute promyelocytic leukemia (APL). Currently Trisenox (asrsenic trioxide injection) from Cephalon Pharmaceutical Company has been commercially used for APL treatment [43, 44], though it shows complication indications such as APL differentiation syndrome [45], cardiac conduction abnormalities [46] and hepatotoxicity [47]. Recently combination therapy of arsenic trioxide and natural compounds such as cucurbitacine B [48], cryptotanshinone [49], naringenin [18], resveratrol [19], retinoic acid [20] and lipoic acid [21] is recommended for synergistic antitumor effect for reducing adverse effect of arsenic compounds [50]. Here the antitumor mechanism of PROS, an arsenic herbal mixture that has been used for several cancers at KMD clinics, was explored in NSCLCs. PROS exerted significant cytotoxicity in several cancers such as A549, H460, HCT-116, 786-O, PC-3 and DU145 cancers compared to OS or PR alone, while PR showed weaker cytotoxicity in A549 and H460 NSCLCs compared to other cancers. Also, PROS induced sub G1 accumulation, S phase arrest, increased apoptotic bodies, and attenuated the expression of pro-PARP in A549 and H460 cells, indicating the apoptotic effect and S phase arrest of PROS. Consistently, PROS suppressed the expression of cell cycle related proteins such as Cyclin E, Cyclin A, CDK2, E2F1 in A549 and H460 cells, since Cyclin E binds to CDK2, which is required for the transition from G1 to S phase, Cyclin A can regulate cell cycle through S and G2/M phases with CDK2 or CDK1 [51] and also E2F1 is working during the G1/S transition. Also, as antiapoptotic proteins, the expression of Bcl-2, p-Src, p-ERK, p-AKT, COX-2 and SOCS-1 was attenuated in PROS treated A549 and H460 cells, implying PROS inhibits antiapoptotic proteins, leading to apoptosis.

It is well documented that STAT3 is phosphorylated for tumor progression and inflammation by receptor-associated Janus kinases (JAK) [52, 53]. Interestingly, PROS attenuated phosphorylation of STAT3 in A549 and H460 cells and also reduced the expression of IL6 activated p-ERK and p-STAT3 in STAT3 low level H1299 cells, demonstrating the potent role of STAT3 in PROS induced apoptosis.

Accumulating evidences reveal that targeting angiogenesis is a good strategy for effective anticancer therapy [54, 55]. Also, STAT3 is closely associated with VEGF [56, 57] or CDK2 [58] in cancer progression. Here, PROS inhibited VEGF induced proliferation, migration and tube formation in HUVECs and suppressed angiogenesis in CAM assay. Furthermore, PROS attenuated the expression of p-STAT3, VEGF and CDK2 and also disrupted the binding of STAT3 with CDK2 or VEGF in A549 cells, indicating PROS exerts antiangiogenic effect via disrupted binding of STAT3 with CDK2 or VEGF. Additionally, PROS reduced the growth of H460 cells implanted in BALB/c athymic nude mice via inhibition of STAT3, VEGF and activation of caspase 3. 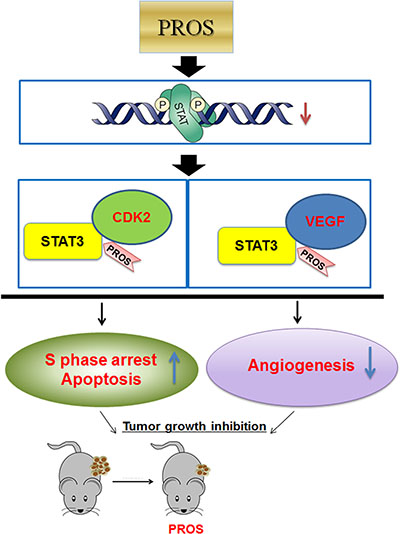 Figure 6: Schematic diagram of antiangiogenic and apoptotic effect of PROS via inhibition of STAT3/VEGF/CDK2 axis signaling.

The cytotoxicity of PR, OS and PROS was measured by 3-(4,5-dimethylthiazol-2-yl)-2,5-diphenyltetrazolium bromide (MTT) assay. In brief, A549 and H460 cells (1 × 104 cells/well) were seeded onto 96-well culture plate and exposed to various concentrations of PR or/and OS (180 μg/ml) for 24 h, while HUVECs were exposed only to PROS for 24 h. The cells were incubated with MTT (1 mg/mL) (Sigma Chemical) for 2 h and then treated with MTT lysis solution overnight. Optical density (OD) was measured using a microplate reader (Molecular Devices Co., USA) at 570 nm. Cell viability was calculated as a percentage of viable cells in drug treated groups versus untreated control.

A549 and H460 cells were treated with PR (2.5 μg/ml) or/and OS (180 μg/ml) for 24 h and the treated cells were seeded onto poly-L-lysine coated slides and fixed using 4% methanol-free formaldehyde solution for 25 min at 4°C. After washing the slides with PBS, mounting medium with DAPI was dispersed over the entire section of slides and visualized under AxioVision 4.0 fluorescence microscope (Carl Zeiss Inc., Weimar, Germany).

HUVECs (1 × 104 cells) were seeded onto 0.1% gelatin-coated 96-well microplates and incubated in a humidified incubator for 24 h. the cells were cultured in M199 containing 5% heat-inactivated FBS, 10 ng/ml VEGF the presence or absence of PROS for 48 h and the viability of HUVECs was determined by using MTT assay.

Confluent HUVECs (3 × 105 cells) were seeded onto 0.1% gelatin coated 6-well plates and the monolayer was wounded by using a tip of a 200ml pipette tip. Then cells were treated with PROS in M199 with 5% FBS, 10 ng/ml VEGF and 5 units/ml heparin for 18 h. Then the cell were rinsed with PBS and stained with Diff Quick solution and randomly chosen fields were photographed under a light microscope at X100 magnification. The number of migrated cells was counted.

The motility of A549 cells was assayed by a wound-healing assay. Cells (4 × 105 cells/mL) were seeded onto 6-well plate and incubated at 37°C. The confluent cells were scratched with a 200 μL pipet tip, followed by washing with PBS, and then treated with PR (2.5 μg/ml) or/and OS (180 μg/ml) in a complete medium for 16 h. Then the cells were fixed and stained with Diff-Quick, and randomly chosen fields were photographed under a fluorescence microscope (AXIO observer A1, Zeiss, Germany). The number of cells migrated into the scratched area was calculated.

In vitro differentiation of HUVECs into capillary-like tubes was evaluated on Matrigel. HUVECs (2 × 104 cells) were seeded onto Matrigel-coated 24-well plates, and were cultured in M199 with 1% FBS, 10 ng/ml VEGF and 5 units/ml heparin with or without PROS for 18 h. Then, cells were fixed with 4% paraformaldehyde, and randomly chosen fields were photographed under an Axiovert S 100 light microscope (Carl Zeiss, Thornwood, NY, U.S.A.) at ×100 magnification.

The ex vivo angiogenic activity was assessed using chorioallantoic membrane (CAM) assay. PROS and VEGF (100 ng) were loaded onto 1/4 piece of thermonox disk (Nunc, Naperville, IL, USA). The dried thermonox disk was applied to the CAM of a 10-day-old embryo. After 2 days incubation, a fat emulsion was injected under the CAM for better visualization of the blood vessels. The number of newly formed blood vessels was counted.

The animal studies were conducted under guidelines approved by Institutional Animal Care and use Committee, Kyung Hee University [KHUASP(SE)-17-003]. Briefly, 2 million H460 cells were mixed with Matrigel (50%, in 100 μl; Becton Dickinson, Bedford, MA, USA) and injected subcutaneously on the right flank of 6-week-old female BALB/c athymic nude mice (NARA Biotech, Seoul, Korea). One day after tumor inoculation, mice were daily given oral administration of PROS (PR 125 μg/kg + OS 20 mg/kg) for 18 days. Tumor volumes were measured every six days with a caliper, and calculated. According to the formula [(L × W2)/2], where L and W stand for length and width, respectively. All mice were sacrificed 18 days after tumor inoculation and the tumors were excised and weighed.

This work was supported by a National Research Foundation of Korea (NRF) grant funded by the Korean government [MEST] (No. 2017R1A2A1A17069297).