Methods: Based on the genetic polymorphism profile of CYP1A1-rs1048943, GSTM1, mEH-rs1051740, XRCC1-rs1799782 and XRCC1-rs25489 and the methylations of p16 and RASSF1A gene, and the length of telomere in the peripheral blood from 200 lung cancer patients and 200 health persons, the discriminative model was established through decision tree and ANN technique.

Conclusion: The early intelligent discriminative model of lung cancer based on multiple tumor markers and data mining techniques has a higher accuracy rate and might be useful for early diagnosis of lung cancer.

According to WHO data, cancer is the second cause of death which has caused about one-sixth of the death (8.8 million) in 2015 worldwide. Lung cancer is the leading cause of cancer death, which led to 1.69 million people died, accounting for about 19% [1]. In China, there are approximately 600,000 people died because of lung cancer. The morbidity and mortality of lung cancer is the highest in the malignant tumors [2]. The 5-year survival rate of IA stages lung cancer was 70%, but the total rate was only about 15%, and the standardized mortality rates are expected to continue rising [3]. Therefore, improvement of the early diagnosis has great clinical significance for the prevention and treatment of lung cancer.

With the development of gene expression profiling technology and data mining technology, people could obtain and analyze the early molecular events of lung cancer, and thus expected to achieve the secondary prevention of lung cancer [4]. To date, low-dose computed tomography (CT), Auto Fluorescence Bronchoscope and Liquid-Based Cytology versus Conventional Cytology are used for the diagnosis of lung cancer, which made some progress, but still have some limitations in sensitivity, specificity and applicability. Thus, starting from the serum markers, finding susceptible and effective biomarkers have become a hot research topic. At present, many single nucleotide polymorphisms (SNPs) associated with lung cancer have been found by GWAS, Taqman probe (Taqman real time PCR) assays, DNA sequencing technology, such as CYFRA21-1 [5, 6], NSE [7], CA19-9 [8], KDM4A [9, 10], TP53 [11], KRT81 [12], etc. In epigenetic field, methylation, histone modification, RNA correlation silence, telomere are also relates with the development of lung cancer [13–16]. Multiple tumor markers are usually used to improve the detection effect of early lung cancer, because the single tumor marker isn’t reliable.

In this study, we screened the biomarkers related to genetic susceptibility and epigenic modification of relevant genes in lung cancer, and analyzed the relationship between these biomarkers and the occurrence of lung cancer and established the early intelligent diagnostic model of lung cancer was also established based on multiple tumor markers and data mining techniques. We also performed comparison between data mining and Fisher discriminatory analysis in the classification effect, explored the application value of tumor markers in the early warning of lung cancer, in order to construct the early intelligentized model for diagnosis.

Table 1: General characteristics of the case and control group

The lung cancer patient group and the control group were divided into four layers according to the quartile of two genes methylation level, the results showed that the increase of p16 gene and RASSF1A gene correlated with increasing risk of lung cancer(Ptrend<0.05); The median of two genes methylation level was divided into two layers according to the median, the results showed the level of methylation higher than the median will cause increasing risk of lung cancer as seen in Table 3.

Table 3: The level of p16, RASSF1A gene methylation and the risk of lung cancer

ps: * is used unconditional Logistic regression to calculate OR and P values, Adjusted by gender, age, smoking status; ** is the result of x2.

Analysis of the association between telomere relative length and lung cancer

Table 4: Telomere length and the risk of lung cancer

Evaluation of lung cancer discriminative model based on 5 genetic polymorphisms

Through analyzing the diagnostic value of three kinds of models by ROC, results showed the ROC curve area (AUC) of Fisher discriminant analysis is less than 0.7 showing the lower accurate diagnosis, but the AUC of decision tree and ANN are all closed to 0.9, showing the better accurate of diagnosis. The model prediction results are shown in Table 5 and Figure 1. 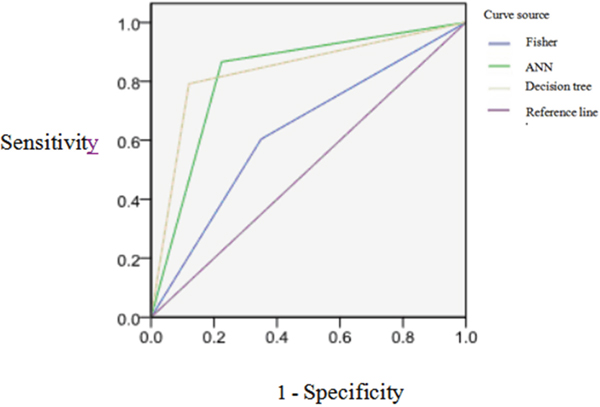 Figure 1: The ROC curves of three kinds of models for classification effect of prediction set model.

Table 5: The diagnostic results of the 3 models on the prediction set

Through analyzing the diagnostic value of models by ROC, the result showed the ROC curve area (AUC) of Fisher discriminant analysis is less than 0.7 showing the lower accurate diagnosis, but the AUC of decision tree and ANN model are more than 0.7 which indicates the moderate accurate diagnosis better than the diagnostic value of Fisher discriminant analysis as seen in Table 6 and Figure 2. 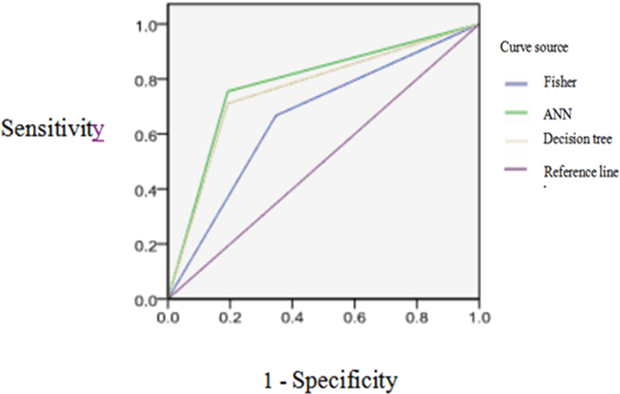 Figure 2: The ROC curves of three kinds of models for classification effect of prediction set model.

Table 6: The diagnostic results of the 3 models on the prediction set

Evaluation of lung cancer discriminant model based on tumor markers 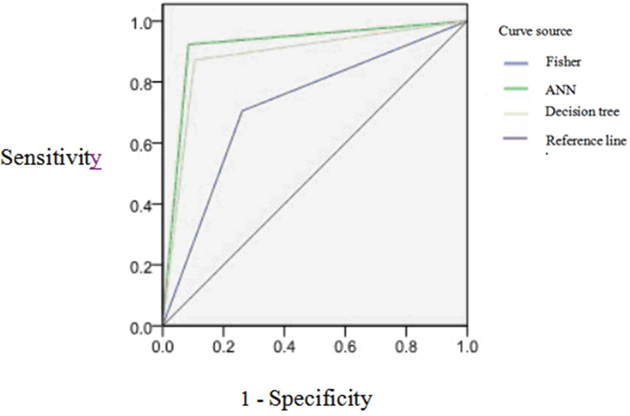 Figure 3: The ROC curves of three kinds of models for classification effect of prediction set model.

Table 7: The diagnostic results of the 3 models on the prediction set

Through combining the genetic polymorphism of CYP1A1-rs1048943, GSTM1, mEH-rs1051740, XRCC1-rs1799782 and XRCC1-rs25489, the methylation of p16 and RASSF1A gene, the length of telomere, smoking status and other factors, the early stage classification model of lung cancer was established by using decision tree and ANN techniques through repeated training. And then we classified the lung cancer in the early stage (I+II stage), evaluated the effectiveness and diagnostic value of the model. The results shown that the classification accuracy of the decision tree model is 96.36%, the ANN model is 89.09%, which illustrated the classification results was better as seen in Figure 4 and 5. 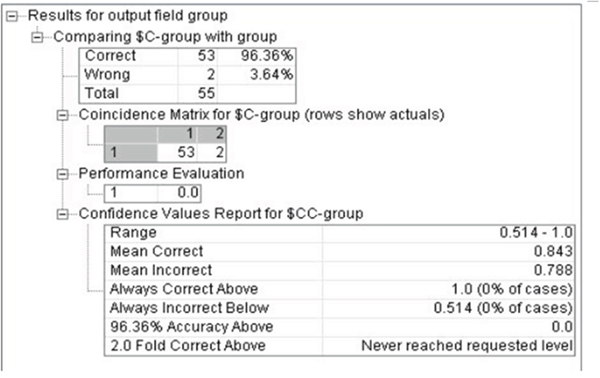 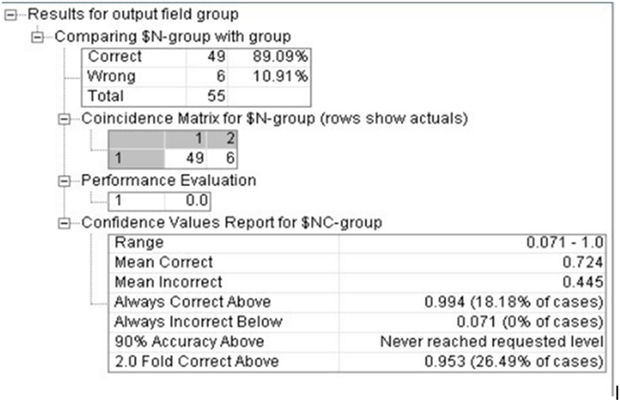 Recent studies have indicated that the occurrence of lung cancer is a multiple- factors and multiple-step process, and it is the result of interaction between genetic and environmental exposure factors [17]. Tumor markers can be produced directly by the tumor or by non-tumor cells. Biomarker can be found in blood, urine, or body tissues. The levels of biomarkers can be elevated specifically caused by the presence of one or more types of cancers. There are many different tumor markers, indicative of a particular disease process. They have been exploited in detection of cancers. An elevated level of a tumor marker indicates the formation or existence of cancer [18]. Therefore, such tumor makers are likely useful tools for early diagnosis, treatment and prognosis of tumor.

Therefore, genetic polymorphisms of CYP1A1-rs1048943, GSTM1, GSTT1, mEH-rs1051740 and XRCC1(rs1799782, rs25489), methylation of p16 and RASSF1A gene, and telomere length were analyzed in peripheral blood both from lung cancer patients and health controls to explore their correlation. The results showed that all indexes had different degrees of correlation with lung cancer. Smoking has the most closer relationship to lung cancer, which is consistent with other research results [19–25]. Compared with the diagnostic model based on different tumour markers, it has been shown that the AUC level of each discriminative model has been improved by about 10% based on multiple tumor markers, which indicates that the sensitivity and specificity of diagnosis can be substantially improved through combining different tumor makers compared to individual tumor marker. Therefore, multiple tumor marker analysis system is more suitable for the construction of the early intelligent discriminative model of lung cancer.

Data Mining, also called Knowledge Discovery from Database, is a complex process which extracts and excavates unknown and valuable knowledge such as model or regular pattern from mass incomplete, fuzzy, noisy, random of data [26–28]. The latest technology, such as database technology, machine learning, artificial intelligence, statistics, information retrieval and data visualization was combined together [29]. Fisher discriminant analysis is a traditional statistical classification method, the principle of this method is substitution the indicators of the observation unit based on discriminant function, obtain the corresponding discriminant function value, and finally according to the function value of the observation unit to determine the classification effect [30].

Through further comparing two discriminant models, the sensitivity, specificity and accuracy of the decision tree model were 90.7%, 94.74%, 93%, and each index from decision tree model was better than the ANN model. The reasons probably are: firstly ANN is a processing network to deal with complex information, which composed by wide connection of many simple processing units [34], needs to transform the discrete attributes of numerical value into numerical attributes, so ANN is more susceptible to data attributes than decision trees [35]. Secondly, the neural network has the better ability to manipulate data with time sequence [36–38], but it requires more data. Moreover, it needs to draw support from the rich experience in training, the training sample set should contain all the patterns, and the input data should as far as possible haven’t relevant between each other, these lead the higher requirements of the sample data, which means the neural network is more suitable for the larger database [39]. In addition, the classification result of Decision tree model was simple, clear, intuitive structure [40–42], has more advantages in explaining and analyzing the results than ANN model.

Finally, in this study tumor markers from 55 patients with diagnosed clinical early stage (I+II) lung cancers were used to evaluate the effectiveness and diagnostic value of the model. The accuracy rate of decision tree and ANN model is 96.36 and 89.09, respectively. The diagnostic efficiency with the new model was better than ANN model.

Limitations need to be considered in explaining the time and causal relationship between the occurrence of molecular events and lung cancer, although we tried to recruit more cases who on Clinical stage I and II, the inherently limitations of case-control design still exist. In the next step, with the permission of funds and technology, we will verify the efficiency of the diagnosis model by expanding the sample size and/or using prospective studies.

The early intelligent discriminative models of lung cancer has the better diagnostic effect and profound significance for diagnostic the early stage lung cancer, which based on multiple tumour markers and data mining techniques.

Genomic DNA was extracted from 2 ml blood according to the instruction of the QIAamp DNA Mini kit.

All the data are normalized to [0, 1] with the max min method.

According to the proportion of 3:1, the data is divided into training set and prediction set by SPSS Clementine software of random sampling founction.

The authors have no conflicts of interest with the subject matter or materials discussed in this manuscript.