Deaths resulting from hepatocellular carcinoma (HCC) rank third in all malignancy-related mortality [1]. In China, liver cancer is the most commonly diagnosed cancer and the leading cause of cancer death in men under the age of 60 years [2]. Surgical resection and liver transplantation are the best options for HCC treatment. However, majority of HCC patients are not eligible for surgical operation due to metastasis, which is also a major obstacle to cure.

Systemic dissection of the molecular mechanisms underlying metastatic progression of HCC is necessary for the development of new diagnostic and therapeutic strategies to prevent and treat metastases. Epithelial-to-mesenchymal transition (EMT) is a key event in metastasis [3, 4]. CR6-interacting factor 1 (CRIF1), also known as Gadd45gip1 or PRG6, regulates cell cycle by inhibiting G1 to S phase progression, and binds to Gadd45 family [5], which plays an important role in genomic stability and regulation of the cell cycle. However, the precise role of CRIF1 in HCC has not been investigated.

In this study, we evaluated the expression of CRIF1 in HCC tissues, and investigated its function in regulating HCC cell proliferation, in vivo tumor growth, EMT, and HCC metastasis.

CRIF1 expression is decreased in HCC patients, and correlates with patients’ survival

First, we analyzed CRIF1 expression in human HCC tissues by immunohistochemistry (IHC). 38 out of 109 HCC tissues (34.9%) had high CRIF1 levels (staining score>6), while 66 of the 109 para-tumor tissues (60.6%) had high CRIF1 levels (chi-square test, P<0.001). CRIF1 was downregulated in HCC tissue (Figure 1A, 1B, 1C, 1D and 1E). Pearson correlation analysis revealed that the CRIF1 protein level was tightly related to tumor differentiation (P = 0.049) and diameter (P = 0.047) (Table 1). Univariate analysis demonstrated that tumor diameter, differentiation, and CRIF1 expression were of statistical significance. As shown in Figure 1F, Decreased CRIF1 expression in HCC tissues was associated with poor post-operative survival (P=0.018). The overall three-year survival rates for the low CRIF1 and high CRIF1 groups were 25.8% and 48.8% respectively (P=0.023). 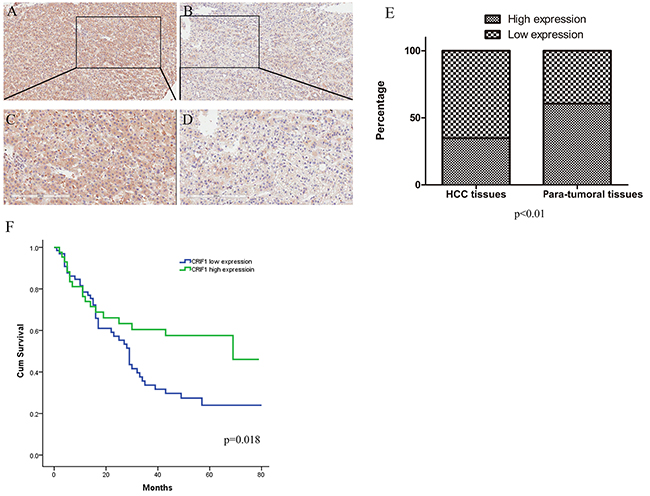 Figure 1: Immunohistochemical staining and prognosis value of CRIF1. Immunohistochemical analysis showed that the CRIF1 protein expression was lower in HCC tissues (B and D) than in paracarcinoma tissues (A and C). (A, B: 100× magnification; C, D: with 200× magnification). (E) CRIF1 was downregulated in the tumor tissues (P<0.01). (F) Its expression level was negatively correlated with the prognosis of HCC patients (P=0.018). 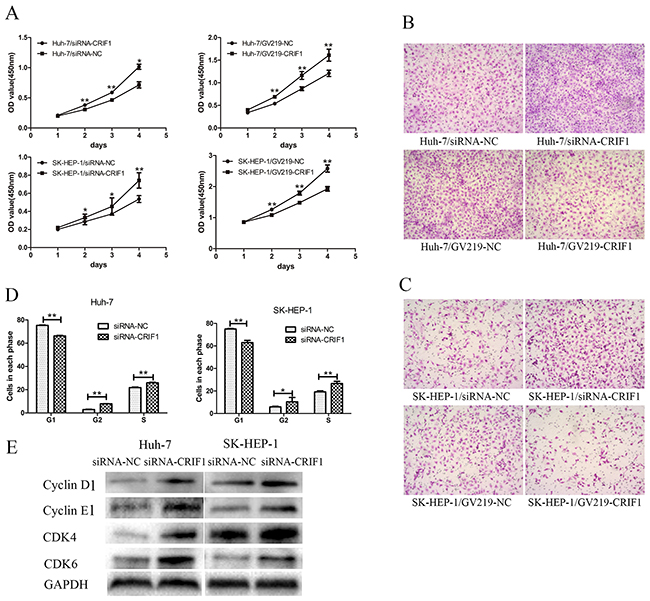 Figure 2: The effects of CRIF1 on phenotype of HCC cell lines. (A) Knockdown of CRIF1 promoted cell proliferation, while enforced expression of CRIF1 inhibited it in Huh-7 and SK-HEP-1. (B, C) The invasive potential of HCC cells was increased in the siRNA-CRIF1 group, and decreased in the GV219-CRIF1 group. (D) CRIF1 knockdown decreased the number of G1 phase cells and increased the number of G2 and S phase cells in hepatocellular carcinoma cell lines. (E) CRIF1 knockdown resulted in elevation of Cyclin D, Cyclin E, CDK4 and CDK6. (**: P<0.01, *:0.01<p<0.05).

To evaluate the role of CRIF1 in promoting HCC tumorigenicity in vivo, mice were subcutaneously injected with HCC cells with CRIF1 knockdown (CRIF1-KD) or normal control (NC) cells. As shown in Figure 3, four weeks after injection, the CRIF1-KD group had significantly larger tumors (1.115 +/- 0.209 cm, n=8) than the CRIF1-NC group (0.496 +/- 0.196 cm, n=8, P<0.001). Xenograft tumors in the CRIF1-KD group had elevated percentage of Ki-67 positive cells compared to the control group (Figures 3C–3F). 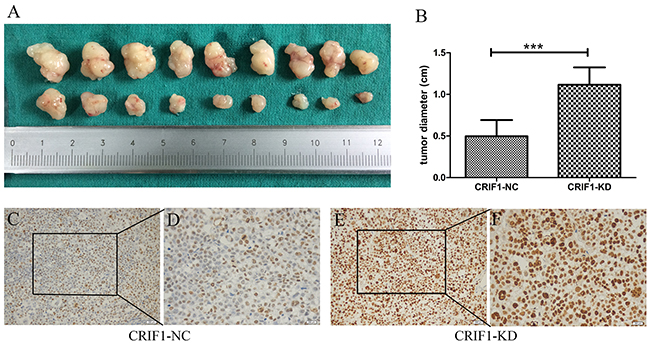 A total of 527 differentially expressed genes (fold change>2, p < 0.05) were identified between SK-HEP-1 cells transfected with siRNA-CRIF1 or siRNA-NC. The data were further analyzed with an online database (http://david.abcc.ncifcrf.gov/). The gene ontology analysis (Figure 4A) and Kyoto Encyclopedia of Genes and Genomes (KEGG) analysis (Figure 4B) indicated involvement of genes and signaling pathways involved in the regulation of cell death, apoptosis, adhesion, and migration. Among them, MMP3 exhibited the most significant change. Knockdown of CRIF1 in HCC cells increased the mRNA expression of MMP3, Smad6, CDK6, and several other genes, while restoration of CRIF1 decreased the expression of these genes (Figures 4C and 4D). 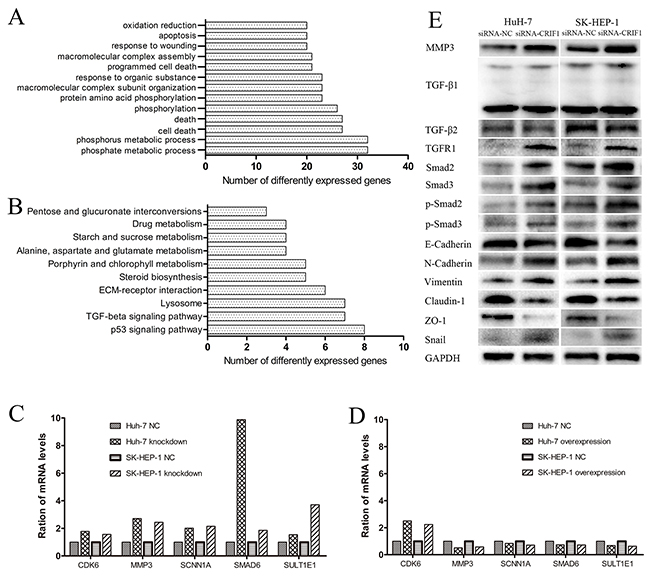 TGF-β signaling is activated by CRIF1 knockdown in HCC cells

Since the activation of TGF-β signaling causes EMT and tumor metastasis, we investigated the impact of CRIF1 suppression on EMT in HCC cells. As shown in Figure 4E, we found a decrease of epithelial marker E-cadherin and elevation of mesenchymal markers N-cadherin and vimentin in CRIF1-suppresed cells. Snail, which binds to E-cadherin promoter region to repress transcription, was also upregulated. Meanwhile, tight junction-associated proteins claudin and ZO-1 were downregulated. Double immunofluorescent staining of E-cadherin and N-cadherin confirmed that CRIF1 knockdown promoted EMT (Figure 5). When treated with TGF-β receptor I specific inhibitor SB525334, CRIF1 knockdown-activated TGF-β signaling, invasion, and EMT were abrogated (Figure 6), suggesting that CRIF1 suppression promotes invasion and EMT in Huh-7 and SK-HEP-1 cells through TGF-β/Smad signaling.

Metastases account for the great majority of cancer-associated deaths, yet this complex process remains the least understood aspect of cancer biology [6]. Unraveling the mechanism of metastasis will open a new avenue to cancer cure. CRIF1 inhibits cell cycle, and functions as an essential STAT3 coactivator [7]. CRIF1 induces cell cycle arrest in the G1 phase by inhibiting the kinase activity of Cdk2-cyclin complexes, Cdk1-cyclin B1and histone H1 [8, 9]. However, the role of CRIF1 in HCC has not been investigated.

Microarray data have indicated that several important genes including MMP3, PTEN, Smad6, and CDK6 are regulated by CRIF1 [10–12]. Among them, MMP3, a member of the matrix metalloproteinase (MMP) family, which is involved in the breakdown of extracellular matrix in processes, such as tissue remodeling and metastasis [13], had the largest fold change. The observed changes in MMP3 protein levels following CRIF1 knockdown or overexpression, may represent one of the mechanisms of how CRIF1 regulates invasiveness of HCC cells.

TGF-β1 has a differential regulatory effect on MMPs. It up-regulates MMP2 and MMP9, down-regulates MMP1 and MMP8 [15–18], and has no effect on MMP3 [19]. In our study, we found that blocking TGF-β signaling did not affect MMP3 expression in HCC cells. TGF-β signaling and MMP3 are involved in EMT [20–24]. MMP3 directly cleaves the extracellular domain of E-cadherin, prompting normal mammary epithelial cells to disaggregate and undergo EMT [25]. Pharmacological inhibition of MMP3 abrogates the TGF-β1-triggered cell invasiveness [26]. In this study, we found elevation of MMP3 and activation of TGF-β signaling following CRIF1 knockdown, so we sought to investigate the role of EMT in CRIF1 regulated cell invasiveness. As expected, CRIF1 knockdown decreased E-cadherin, and increased N-cadherin.

To confirm our hypothesis that CRIF1 regulates HCC EMT through TGF-β signaling, we treated CRIF1-KD and CRIF1-NC cells with SB525334, a TGF-β receptor I (ALK5) specific inhibitor [27–29]. Since blocking the TGF-β receptor inhibited the HCC cell invasiveness and EMT, these data indicate that CRIF1 regulates cell invasion via TGF-β-activated EMT and MMP3 expression. EMT and MMP3 have been considered as candidate targets for cancer therapy [30–35]. For example, galunisertib, TGF-β receptor I inhibitor, has been associated with strong improvement of HCC in the phase II trial [36].

Together, our results reveal a novel function of CRIF1 in regulating EMT and MMP3 expression in HCC cells, and suggest that CRIF1 may be an ideal target for inhibiting HCC metastasis.

The human HCC cell lines Huh-7 and SK-HEP-1 were purchased from Chinese Academy of Sciences Shanghai cell bank and cultured in complete growth medium, as recommended by the manufacturer. Cells were maintained at 37°C in a humidified incubator with 5% CO2. The TGF-β RI specific inhibitor SB525334 was purchased from Sellleck (Selleck Chemicals, Houston, TX, USA), and used at a concentration of 1 μM.

Total RNA was extracted from tissues or cells with Trizol reagent (Invitrogen, USA). qRT-PCR was carried out using the master SYBR Green kit (Takara Bio, Japan) according to the manufacturer’s instruction by ABI Prism 7500 fast sequence detection system (applied Biosystem, USA). All reactions were performed in triplicates, and analyzed by using the 2-ΔΔCt method. The results were normalized to mRNA expression of GAPDH, which was used as internal control.

siRNA-CRIF1 and siRNA-NC (negative control) were synthesized by Invitrogen. The siRNA sequence for CRIF1 was ACACCUAGUAGGCUGCGUGCCUGUC. Hu-7 and SK-Hep-1cells were cultured in 6-well plates in MEM. When cells were about 30% confluent, they were transfected with siRNA- CRIF1 or siRNA-NC using transfection reagent (Lipofectamine 2000, Invitrogen, Carlsbad, CA). The CRIF1-recombinant and NC vectors were constructed by GeneChem. Stable CRIF1 knockdown (CRIF1-KD) and its negative control (CRIF1-NC) cell lines were obtained by infection of lentivirus targeting CRIF1 and the negative control. The efficiency of transfections was validated by qRT-PCR and western blotting. Fluorescence of CRIF1-KD and CRIF1-NC cells was observed after transfection and puromycin screening (Supplementary Figure 1).

Polycarbonate membranes Transwell (Corning, USA) and Matrigel (BD, USA) were used for the migration assay. After different treatments, a total of 5×104 Hu-7 and SK-Hep-1cells were suspended in 200 μL of serum-free medium and seeded into the upper chamber, while 600 μL of MEM containing 10% FBS was added to the lower chamber. After incubation at 37°C, the cells on the upper membrane were removed with cotton swabs. The membranes were fixed in paraformaldehyde solution and stained with 0.5% crystal violet. Cells on the lower surface of the membrane were counted in randomly selected fields with microscope (100×). The experiment was independently repeated three times.

All animal experiments were performed according to the Zhejiang University Animal Care Facility and National Institutes of Health guidelines.

All values are expressed as mean ± standard deviation. Student’s t-test was applied to evaluate statistical significance. The variable was converted to a logarithm if it did not conform to a normal distribution. X2 test was used to detect the difference between categorical variables. The endpoint for follow-up was patient death. Overall survival rates were calculated using the Kaplan–Meier method. Log-rank tests were performed for univariate analysis. P-values less than 0.05 were considered statistically significant. All statistical analyses were performed using SPSS 11.0software (SPSS, Chicago, IL).

We thank Jili Cao, Yuhui Liu, and Chao Wang for their technical help. We also thank Haijun Guo for his assistance in preparation of patient clinical information.

This work was supported by the National Natural Science Funds for Distinguished Young Scholar of China [grant numbers 81625003]; Cheung Kong

This work was supported by the Projects of Medical and Health Technology Program in Zhejiang Province (2017RC002).