Adequate iron levels are essential for human health. However, iron overload can act as catalyst for the formation of free radicals, which may cause cancer. Cancer stem cells (CSCs), which maintain the hallmark stem cell characteristics of self-renewal and differentiation capacity, have been proposed as a driving force of tumorigenesis and metastases. In the present study, we investigated the role of iron in the proliferation and stemness of CSCs, using the miPS-LLCcm cell model. Although the anti-cancer agents fluorouracil and cisplatin suppressed the proliferation of miPS-LLCcm cells, these drugs did not alter the expression of stemness markers, including Nanog, SOX2, c-Myc, Oct3/4 and Klf4. In contrast, iron depletion by the iron chelators deferasirox and deferoxamine suppressed the proliferation of miPS-LLCcm cells and the expression of stemness markers. In an allograft model, deferasirox inhibited the growth of miPS-LLCcm implants, which was associated with decreased expression of Nanog and Sox2. Altogether, iron appears to be crucial for the proliferation and maintenance of stemness of CSCs, and iron depletion may be a novel therapeutic strategy to target CSCs.

According to the cancer stem cell (CSC) hypothesis, cancer tissues contain a low percentage of CSCs, which have the ability to differentiate and self-renew [1, 2]. CSCs are resistant to chemotherapy and radiation therapy, and are strongly implicated in relapse after treatment [3–5]. Although CSCs are considered to be important targets therapeutically, clinically effective CSC targeting strategies have not yet been established, at least partly because the low number and heterogeneity of CSCs in cancer tissues makes the evaluation of therapy difficult. Recently, a new CSC model was established from mouse induced pluripotent stem cells (miPS cells) at Okayama University [6]. This CSC model, referred to as miPS-LLccm, was epigenetically induced from miPS cells by culturing in Lewis lung carcinoma conditioned medium for 4 weeks. miPS-LLCcm cells maintain expression of stemness markers, self-renew, and are pluripotent. miPS-LLCcm cells express Nanog-driven GFP in the undifferentiated state, and also express the Yamanaka factors, Sox2, c-Myc, Oct3/4 and Klf4, which are characteristic of pluripotent stem cells, and are also CSC markers associated with tumorigenesis and resistance to therapy [7–10]. In vivo, miPS-LLCcm cells form tumors with a malignant phenotype including cytokeratin positive glands, high nuclear to cytoplasmic ratio, severe nuclear atypia, multiple pathological mitotic figures and hyper-vascularization. Importantly, miPS-LLCcm cells have been used as an organ specific CSC model and for analysis of the CSC microenvironment [11, 12]. Although miPS-LLCcm require induction in the context of organ specific CSC models, the system is a tractable and convenient approach for the evaluation of CSC marker expression and the efficacy of new CSC targeted therapies.

Iron plays a key role in critical cellular processes, such as energy production and DNA synthesis. Although adequate iron levels are essential for human health, iron overload is known to cause some types of cancer [13, 14]. We previously demonstrated that iron depletion had an anti-cancer effect on some types of malignancies [15–17], potentially reflecting an important role for iron in regulating the cancerous niche including stemness, and in turn suggesting that iron depletion may be an effective therapeutic option for cancer treatment. In this study, we studied the efficacy of iron depletion therapy targeting CSCs using the iron chelators, deferasirox and deferoxamine. 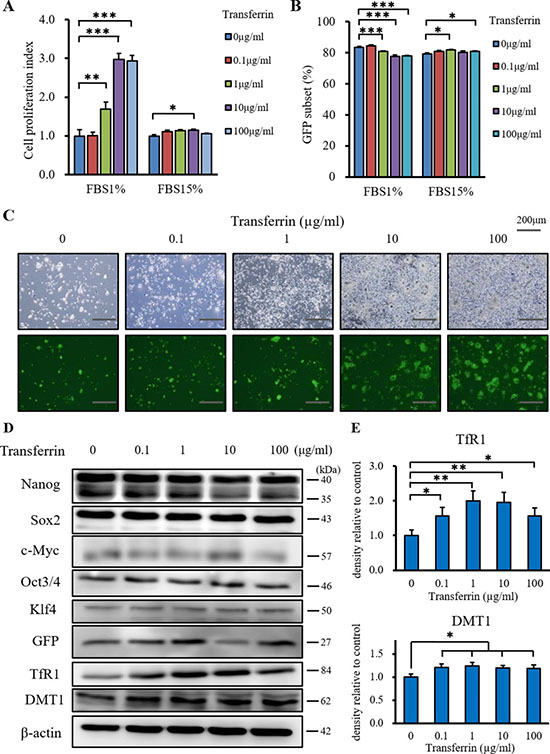 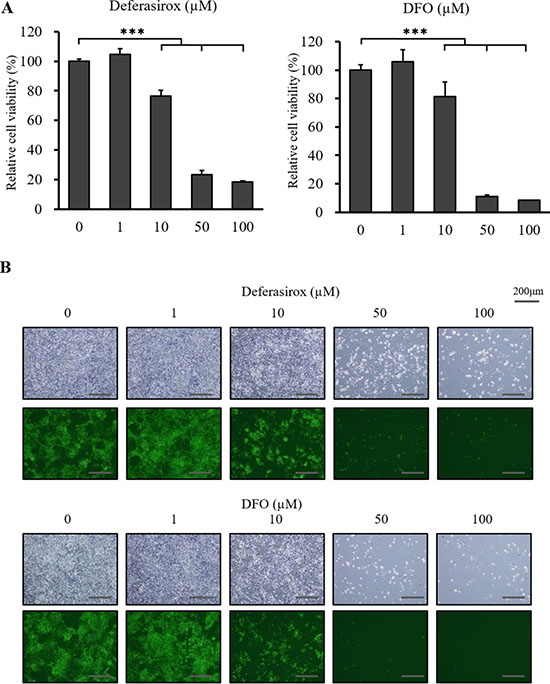 Figure 2: The inhibitory effect of deferasirox and DFO on miPS-LLCcm cells in vitro. (A) Cultured miPS-LLCcm cells were treated with different concentrations of deferasirox and DFO for 48 hours and cell viability was then evaluated using the XTT assay. Cell viability in the absence of treatment was set at 100%. Results are means of 3 independent experiments. Data are represented as average ± S.E.M. (n = 5). ***p < 0.001. (B) Normal and fluorescence microscopy findings showed that numbers of GFP positive and negative cells were decreased in a dose dependent manner.

Table 1: IC50 of deferasirox and DFO for miPS-LLCcm cells 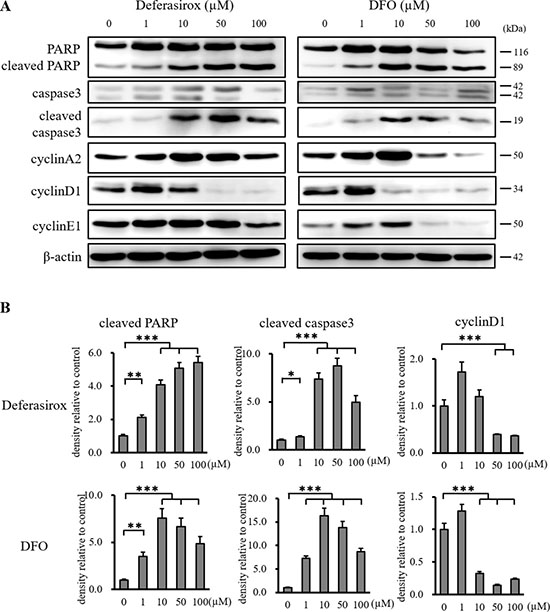 Iron chelators suppress the expression of stemness markers, including Nanog and Yamanaka factors, in the CSC model 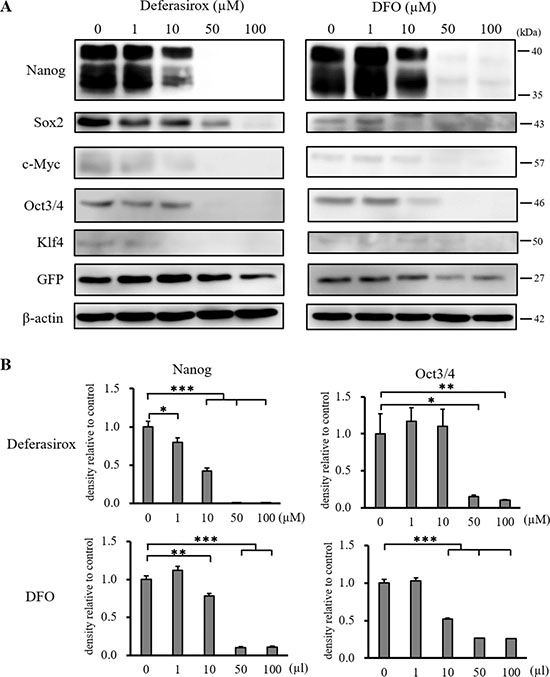 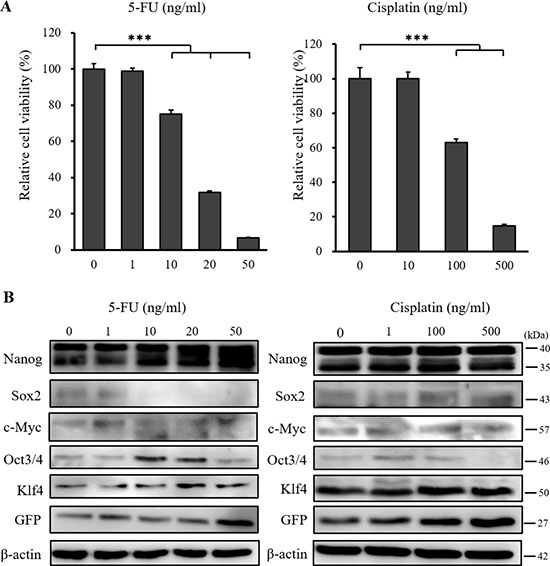 To address the suppression of proliferation and stemness markers in vivo, we employed a miPS-LLCcm CSC tumor allograft model using BALB/c nude mice. The chelators were administered directly according to clinical dose guidelines at 30 mg/kg for 5 days in a week. After 18 days of local treatment with the vehicle control (PBS) the tumor allografts reached an average volume of 1270.82 ± 411.17 mm3. However, the iron chelators significantly decreased tumor growth (deferasirox 360.27 ± 148.84 mm3; DFO 502.53 ± 207.45 mm3, Figure 6A and 6B). Tumor weight was also significantly decreased in the iron chelator groups (tumor weight: control vs deferasirox vs DFO: 1250 ± 300 mg vs 600 ± 180 mg vs 400 ± 50 mg) (Figure 6C). The body weights of treated mice were not significantly different to controls, which indicated that iron chelators did not induce serious side effects (Supplementary Figure 5A). To examine the suppression of stemness markers, tumors were collected for immunohistochemistry. Deferasirox and DFO suppressed the expression of GFP and stemness markers, including Nanog, Sox2, c-Myc, Oct3/4 (Figure 6D and Supplementary Figure 5B). The blue spots of berlin blue iron staining were detectable only in the control group, which indicated that iron in the tumor was decreased by deferasirox and DFO. These results indicated that iron chelators suppressed CSC tumor growth and the expression of stemness markers in vivo. 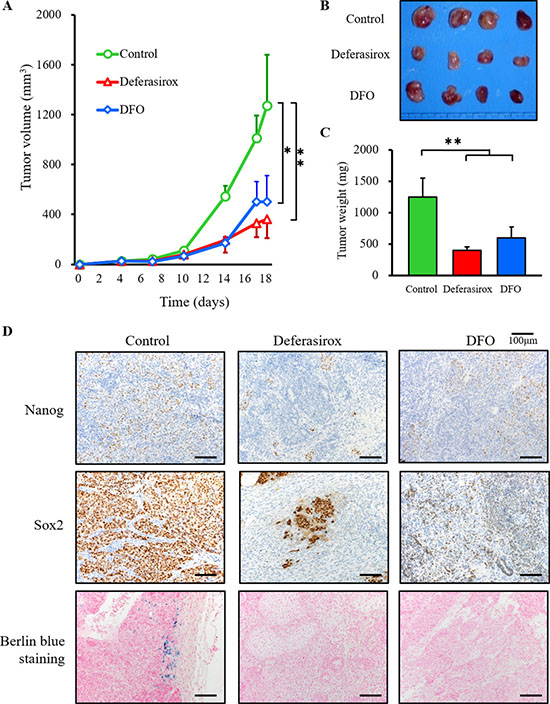 The expression of stemness markers is reported to be linked to increased malignant potential [10]. Although CSCs are thought to be associated with resistance to chemotherapy, the lack of a suitable study model to comprehensively address this question [18–20] has compromised the development of CSC therapies. In this regard, our CSC model has some significant advantages over other models, including the stable expression of stemness markers, such as Nanog and the Yamanaka factors, and the regulation of stemness marker expression by puromycin selection. This latter feature in particular, facilitates more consistent experimental procedures for evaluating the efficacy of CSC targeted therapies.

Iron overload is known to induce some types of cancer [13, 14] and iron chelators were reported to have anti-cancer effects [21, 22]. We also reported that iron depletion had therapeutic potential for cancer treatment [15, 16] and not only suppressed the proliferation of cancer cells, but also their migration and invasion abilities [17]. These findings indicated that cancer cells use iron for many functions including proliferation and metastasis, and iron may also be critical for the maintenance of CSCs. Indeed, our studies showed that iron chelators have significant antiproliferative effects on both CSCs and differentiated cancer cells, but not normal fibroblasts, possibly because CSCs and differentiated cancer cells have a higher proliferative potential than normal fibroblasts.

There are some reports that the inhibition of Nanog suppressed cancer cell proliferation and tumor growth [23, 24], and our results indicated that the role of Nanog might be similar in CSCs. 5-FU and cisplatin could not suppress the expression of stemness markers, which indicated that these standard anti-cancer drugs may not target CSCs. Thus, iron chelators may be an effective adjunct to standard chemotherapy. Moreover, iron chelators may reduce the development of resistance by suppression of the expression of stemness markers in the tumor. Further analysis of this phenomenon using orthotropic tumor models may help delineate the mechanisms underlying the development of resistance [25–27].

Deferasirox suppressed the expression of stemness markers more effectively than DFO. This is consistent with the suggestion that the chelation ability of deferasirox is stronger than DFO [28]. Although the therapeutic potential of PI3K/mTOR dual inhibitors for targeting CSCs has been reported [29, 30], this is the first description of an agent that can effectively suppress stemness marker expression, which may be a unique function of iron chelators.

Although iron chelators suppressed the expression of stemness markers, the mechanisms are currently unknown. This study may represent an important first step in the development of novel iron chelation based strategies for CSC therapy.

miPS-LLCcm cultures contain GFP positive and GFP negative cells. Nanog driven GFP cells carry the puromycin-resistance gene facilitating the selection of miPS-LLCcm CSCs by puromycin resistance. Puromycin (puromycin dihydrochloride, catalog no. p8833, Sigma-Aldrich, St. Louis, MO, USA) was dissolved in distilled water at a stock concentration of 1 μg/μl and added to the miPS-LLCcm medium at a final concentration of 1 μg/ml. After puromycin selection, GFP positive cells were purified to almost 90% homogeneity (Supplementary Figure 1A). This approach was used to purify CSCs (GFP positive cells) for all experiments. Experiments were performed when the cultures were approximately 80% confluent after puromycin selection.

The XTT assay (Cell proliferation kit II, Roche Mannheim, Germany) was used to assess cell proliferation. We simulated iron depletion conditions using iron free DMEM plus 1% fetal calf serum (FCS), and iron rich conditions using iron free DMEM plus 15% FCS. The cells were incubated with holo-transferrin with 1% or 15% FCS and iron free DMEM for 48 hours. The cells were incubated with deferasirox and DFO for 48 hours at 37°C in iron free medium plus 1% or 15% FCS. All experiments used 96-well plates and each experiment was repeated at least 3 times. Optical densities were measured at 450 nm and 690 nm. We seeded the cells as follows; miPS-LLCcm (1.0 × 104/well), 4T1 and colon26 (3.0 × 103/well), MEFs and NIH-3T3 (1.0 × 104/well).

Single cells were plated into ultra-low attached 96-well plates (Corning Costar, Sigma-Aldrich) at a density of 2.5 × 104 cells/ml. Cells were grown in serum-free miPS medium without leukemia inhibitory factor, and incubated for 72 hr.

All animal experiments were performed according to the Japanese Welfare and Management of Animals Act and conducted in accordance with institutional guidelines at Shigei Medical Research Institute, Okayama, Japan. All animal experiments were approved by the Ethics Review Committee for Animal Experimentation of Shigei Medical Research Institute, Okayama, Japan (#150526–1). Female BALB/c (nu/nu) mice were purchased from the CLEA (Tokyo, Japan) and were housed in sterile conditions. Experiments started when the mice were 7 weeks of age. miPS-LLCcm tumor cells in culture were harvested and resuspended in a 1:1 ratio of PBS and Matrigel (BD Biosciences, San Jose, CA, USA). Viable miPS-LLCcm cells (1.0 × 106) were injected into the right back flanks of the mice subcutaneously. Tumor size was measured every 2 days. Deferasirox (30 mg/kg) and DFO (30 mg/kg) were suspended in saline and injected locally into the tumor 5 days per week. The treatment was started 5 days after inoculation (n = 4). Control groups received PBS that was administered by local injection 5 days per week. The tumor volume was calculated by the formula: Length × Width × Height × 0.52. At the end of the experiment, the animals were sacrificed and the tumors were excised, weighed and further processed for histological analysis. These experiments were repeated 3 times.

This work was supported by grants from Okayama Medical Foundation and JSPS Fujita Memorial Fund for Medical Research.