Thyroid cancer is the most common type of endocrine malignancy, and its incidence has been rising rapidly in recent decades [1–4]. The majority of these malignancies are differentiated thyroid cancers (DTC), of which papillary thyroid cancer (PTC) accounts for approximately 85% [5]. There are some rare variants of PTC, such as the tall cell, columnar cell, and diffuse sclerosing variants, as well as insular thyroid carcinoma (ITC) and Hürthle cell (oncocytic, oxyphilic) carcinoma [6–10].

ITC is a rare thyroid malignancy that was first defined by Carcangiu et al. in 1984 [11]. Its morphological features lie between those of well-differentiated carcinoma (papillary or follicular) and undifferentiated or anaplastic carcinoma of the thyroid [12, 13]. This type of thyroid carcinoma is considered an aggressive cancer with a high propensity for local recurrence and distant metastasis [14, 15]; it reportedly has a worse prognosis than classic thyroid carcinomas [9, 12, 13, 15]. However, some studies did not find a significant difference in prognosis between patients with ITC and those with differentiated thyroid cancer: papillary and/or follicular thyroid carcinomas (FTCs) [16, 17]. Additionally, most of the ITC-related literature comprises of case reports or small single institution-based case series, with no large population-level studies.

The Surveillance, Epidemiology, and End Results (SEER) program of the National Cancer Institute is the largest publicly available database of its kind, and is a valued source of high-quality information for cancer incidence and survival in the United States [18, 19]. Propensity score matching (PSM) is a statistical normalization method for analyzing observational data by estimating the effects of a treatment, policy, or other intervention and accounting for covariates that influence the administration of the treatment. The propensity score is a balancing score: The differences between groups on the covariates condensed down into a single score so if two groups balanced on the propensity score then balanced on all the covariates. PSM aims to reduce bias due to confounding variables [20]. In this study, we investigated the prognosis of ITC compared to PTC and FTC by analyzing the SEER database information from 2004–2013 using PSM methods due to the diversity of number of cases with different subtypes.

A total of 66323 patients with different histological subtypes (ITC, n = 165; classic papillary thyroid cancer [CPTC], n = 60739; and FTC, n = 5419) were included in this study. Patients received follow-up until December 2013. The study patients’ mean ages and follow-up durations according to their different histological subtypes are shown in Table 1.

Table 2: Hazard ratios of different histological types for the cancer specific deaths and all cause deaths of thyroid cancer 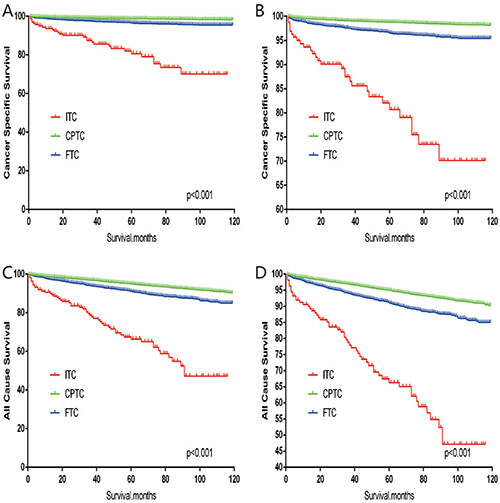 Figure 2: Kaplan Meier curves of cancer-specific mortality for matched subtype pairs. Age, sex and race matching between ITC and CPTC (A), ITC and FTC (B).

Figure 5: Kaplan Meier curves of all cause mortality for matched subtype pairs. Age, sex and race matching between ITC and CPTC (A), ITC and FTC (B).

Figure 6: Kaplan Meier curves of all cause mortality for matched subtype pairs. Age, sex, race, T/N/M stage, multifocality, extension matching between ITC and CPTC (A), ITC and FTC (B).

Figure 7: Kaplan Meier curves of all cause mortality for matched subtype pairs. Age, sex, race, T/N/M stage, multifocality, extension, surgery and radiation treatment matching between ITC and CPTC (A), ITC and FTC (B).

ITC is a distinctive and rare thyroid cancer that is characterized by nests or “insulae” of small uniform neoplastic cells, and has a propensity to metastasize to regional lymph nodes and distant sites [11]. ITC is considered morphologically and biologically intermediate compared to well-differentiated thyroid carcinomas (PTC and FTC) on one hand and anaplastic carcinoma of the thyroid on the other; it was incorporated into the World Health Organization classification of poorly differentiated thyroid carcinoma in 2004 [21, 22]. According to the literature, disease-related mortality due to ITC is higher than that due to DTC [15, 23–25], and its insular histotype is independently associated with patient survival [26, 27]. Because of sample size limitations owing to the overall rarity of ITC, the paucity of available studies have precluded the accurate determination of this disease’s prognosis.

In our analysis of the SEER data, histological subtype was not an independent risk factor for cancer-specific or all-cause mortality. Before performing PSM, ITC was observed to have a poorer prognosis than CPTC and FTC; however, after adjusting for all potentially influencing factors including demographic data and radiation treatment, the cancer-specific mortality rate of patients with ITC was similar to that of patients with FTC and better than that of patients with CPTC. Likewise, the all-cause mortality rate in patients with ITC was better than those in patients with CPTC and FTC. This result was unexpected and maybe have potential prognostic and therapeutic implications for patients with ITC , as it was inconsistent with previously published data [15, 24, 25, 28, 29] ,and it maybe more trustworthy because we performed PSM analyses to adjust for biases from different baseline characteristics of two histotype groups , Surgeons have not yet established the best treatment option for ITC, and our results may provide guidance for clinicians and may also influence the new American Thyroid Association guidelines.

Previous molecular studies have exposed the roles of various oncogenes in different types of thyroid tumors [31, 32]. The discovery of novel molecular-based prognostic markers for thyroid cancer, such as RET-PTC, RAS, BRAF (V600E), PTEN and TERT mutations, are among the most notable developments in thyroid cancer-related medicine [33]. However, the role of molecular mechanisms and genetic events in determining the growth and biologic aggressiveness of ITC remains to be explained. Pilotti et al. [16] reported RAS gene family point mutations involving a high proportion of CAA→AAA transversions at codon 61 of the N-RAS gene in ITC; however, the same abnormality was found with similar frequency in invasive follicular thyroid carcinoma [34]. Likewise, mutations in the p53 gene are also nonspecific, as they have been described in both patients with ITC and in those with anaplastic carcinoma [23, 35]. The further exploration of the molecular changes in ITC may be helpful for tailoring therapeutic interventions, and patient enrollment in clinical trials should be encouraged when systemic therapy for disseminated disease is required.

Our study had several limitations. First, our dataset lacked information on recurrence, which may have led to the overestimation of cancer-specific and all-cause mortality rates. Another limitation is that family history, vascular invasion, and other histologic findings were not evaluated or considered in our study. Furthermore, the SEER is a United States database, and the findings may not be applicable worldwide.

In summary, we found that patients diagnosed with ITC had similar prognoses as those with FTC and better prognoses than those with CPTC; this was contrary to the findings of previous (albeit smaller-sized) studies. Our findings ought to serve as a reference for the planning of future therapies by adjusting the intensity of the interventions based on the prognosis of this disease being more favorable than previously thought.

This investigation was conducted in accordance with the ethical standards set by the Declaration of Helsinki, and pursuant to national and international guidelines. The study was approved by Union Hospital’s institutional review board.

We used the National Cancer Institute’s SEER database to investigate patients with thyroid cancer, including CPTC, ITC, and FTC. The SEER project began in 1973; it is the only comprehensive source of population-based cancer information in the United States, and is supported by both the Centers for Disease Control and Prevention and the National Cancer Institute. This database reports cancer-related data that include the incidence, prevalence, mortality, population-based variables, and primary tumor characteristics (i.e., histological subtype) from multiple geographic regions within the United States.

Patients diagnosed with CPTC, ITC, and FTC between 2004 and 2013 were identified using the SEER database and combinations of the International Classification of Diseases for Oncology site code C73.9 (i.e., thyroid, papillary, and/or follicular histology). The diagnosis codes included in the study were: “papillary carcinoma”, “papillary adenocarcinoma”, “follicular carcinoma”, ”papillary carcinoma, insular”, “follicular adenocarcinoma”, and “papillary and follicular adenocarcinoma”. Thyroid cancer-specific and all-cause survival rates were compared among 66323 patients with CPTC, ITC, and FTC. Age, sex, race, T/N/M stage, multifocality, tumor extension, and radiotherapy (i.e., none or refused, external beam radiation therapy, and radioactive I-131 ablation) were evaluated in patients with different histological subtypes.