Circular RNAs (circRNAs) as a novel type of noncoding RNAs (ncRNAs) are widely studied in the development of human various diseases, including cancer. Here, we found circular RNA hsa_circ_000984 encoded by the CDK6 gene was remarkably upregulated in the tissues of colorectal cancer (CRC) patients and in the CRC cell lines. Moreover, high expression level of hsa_circ_000984 was significantly associated with advanced colorectal cancer. Further analysis revealed that hsa_circ_000984 knockdown could inhibit cell proliferation, migration, invasion in vitro and tumor formation in vivo in CRC cell lines. Mechanically, we found that hsa_circ_000984 may act as a competing endogenous RNA (ceRNA) by competitively binding miR-106b and effectively upregulate the expression of CDK6, thereby inducing a series of malignant phenotypes of tumor cells. Taken together, these observations suggest that the hsa_circ_000984 could mediate the expression of gene CDK6 by acting as a ceRNA, which may contribute to a better understanding of between the regulatory miRNA network and CRC pathogenesis.

Colorectal cancer (CRC) is the common type of malignant tumor with the third occurrence and the fourth leading cause of related cancer death worldwide [1]. Nowadays, in spite of recent progresses in treatment for CRC including chemotherapy and radiation therapy, the prognosis of CRC remains relatively poor [2, 3]. In recent years, among the numerous molecules identified to involve in the development of CRC, noncoding RNAs (ncRNAs) have drawn increasingly focused for their aberrant expression features associated with tumor growth, or metastasis in CRC carcinogenesis [4–6].

In the past decades, whole genome and transcriptome sequencing technologies analysis revealed that a majority of mammalian genomes are transcribed to yield a large proportion of short or long RNAs transcripts with non-coding protein ability [7–10]. Among them, the circular RNAs (circRNAs) represents a re-discovered, abundant RNA molecular that are characterized by forming covalently closed-loop structures produced through an end-to-end formation during transcription [11–13]. Due to their abundance and stability, recent studies have found that circRNAs can be involved in a broad of biological activities by functioning as miRNA sponges and regulators of RNA binding protein in regulating protein-gene expression. The role of circRNAs as miRNA sponges to upregulate or downregulated gene expression in eukaryotes is the main mechanism in physiological and pathological processes [14]. Specifically, a firstly identified circRNA ciRS-7, also termed CDR1as, which harbors seventy miR-7-binding sites, was found to regulate miRNA in malignant tumor cells [15]. Similarly, another study has found evidence that the testis-specific circRNA (Sry) can serve as miRNA sponge for miR-138, influencing activity of miR-138 by binding to them [16, 17]. It is well established that certain miRNAs can exert important regulatory functions in cellular physiology by regulating gene expression, several lines of evidence implicate the remarkable functions of these circRNAs in multiple key biological processes [18, 19]. Moreover, increasing numbers of reports indicate that abnormal expressions of certain circRNAs are closely associated with a biological signature of various diseases including CRC [20–22]. 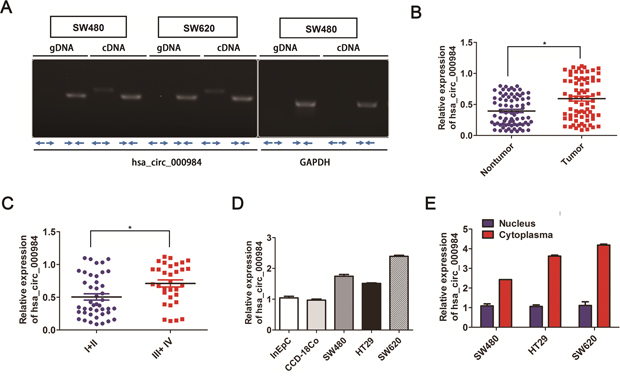 Knockdown of hsa_circ_000984 significantly inhibited the proliferation of CRC cells 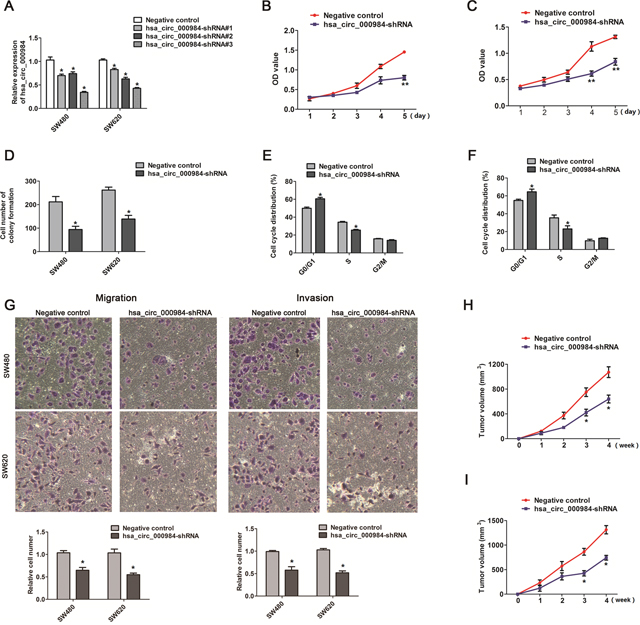 Until now, an amount of data have investigated that circRNA transcripts enriched with numerous miRNA-binding sites could function as miRNA sponges [17, 32, 33]. Next, we utilized the miRNA bioinformatics database TargetScan and miRanda, and identified 6 target miRNAs (miR-17, miR-20a, miR-93, miR-106a, miR-106b, miR-20b) for hsa_circ_000984. If hsa_circ_000984 indeed interacts with the 6 miRNAs, they both must be co-expressed. We then investigated the expression of miRNAs in CRC tissue samples and matched colorectal nontumorous tissues. We found that only miR-106b expression differed between the CRC tissues and those matched colorectal nontumorous tissues with statistical significance. As shown in Figure 3A and 3B, miR-106b was highly expressed in CRC tissue samples (P<0.01), and its expression was positively correlated with hsa_circ_000984 expression in CRC samples (R2=0.488, P<0.01), suggesting the co-expression of miR-106b and hsa_circ_000984 in CRC. Additionally, miR-106b levels were also higher in CRC cell lines than in control cells (Figure 3C). 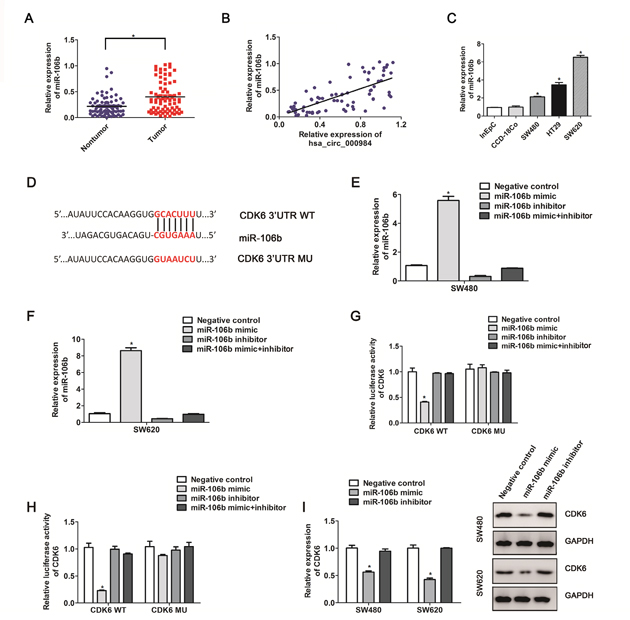 Both circular hsa_circ_000984 and linear CDK6 transcripts are encoded by the CDK6 gene. To examine whether the miR-106b influences both mRNA and protein levels of CDK6, based on bioinformatics analysis, we found CDK6 might be a target of miR-106b with the complementary binding sites with the CDK6 3’UTR (Figure 3D). MiR-106b level was determined by using qPCR after SW480 and SW620 cells were transfected with the miR-106b mimics and miR-106 inhibitors (Figure 3E and 3F). Next, we performed luciferase reporter assay to determine whether miR-106b directly target the CDK6 3’UTR by co-transfecting psiCHECK2-CDK6-3’UTR with miR-106b mimics. The luciferase activity was decreased observed about >72% in both SW480 cells and SW620 cells with the co-transfection of CDK6-3’UTR and miR-106b mimics, whereas mutant of nucleotides in the miR-106b-binding site of CDK6 3’UTR elicited no changes of the reporters to the introduction of miR-106b (Figure 3G and 3H). We further performed qPCR and immunoblot assays to determine the relationship between CDK6 and miR-106b levels. We found the mRNA and protein abundances of CDK6 consistently decreased with the introduction of miR-106b mimics into CRC cancer cells compared with negative controls (Figure 3I). 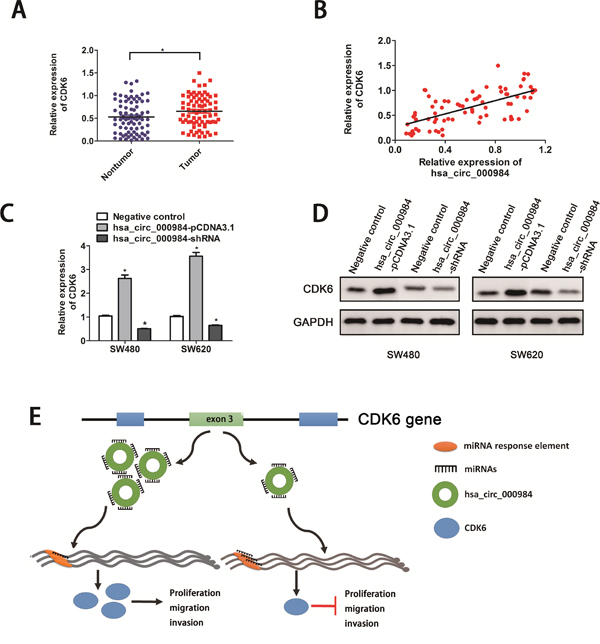 CircRNAs, largely disregarded as novel members of noncoding RNA family that are formed with out of order splice junctions precisely at their canonical linear counterparts [34]. Although these circRNAs have occasionally been reported for more than 20 years, they didn’t attract enough attention because of low abundance, and have been extensively considered as errors in transcripts splicing. In recent years, with the wide applications of high-throughput sequencing, a large number of circRNAs have been broadly identified in cells of various species [35–38]. Because of the unique formation of circRNAs by nonlinear reverse splicing, they are more stable and not easily degraded by RNase R. Thus, this remarkable feature provides them more advantageous as ideal diagnostic markers. Recently, many circRNAs have been shown to mainly function as miRNAs sponge by competing with the endogenous RNA network to directly affect the gene expression. Specifically, the most well-known circular RNA ciRS-7, which is spliced from the antisense transcript of the CDR1 gene, harbors extensive miR-7 binding sites to mediate miR-7 expression in tumor cells. Similarly, a study in esophageal squamous cell carcinoma, showed that cir-ITCH, has a sponging effect on miRNAs, stimulating ITCH levels, promoting tumor development and progression [21]. The cumulative evidence shows that circRNAs play an essential functional role in the carcinogenesis of cancer, including glioma [39], oral cancer [40], hepatocellular carcinoma [41] and colorectal cancer [42]. To our knowledge, this study is the first to investigate the biological roles of hsa_circ_000984 in CRC carcinogenesis.

Our study first demonstrated that hsa_circ_000984 was significantly up-regulated in CRC tissues and CRC cell lines, compared with adjacent normal tissues. Moreover, we found that high expression levels of hsa_circ_000984 in CRC patients were significantly related to advanced TNM stage (III+IV). We then explored the potential biological role of hsa_circ_000984 by shRNA mediated silencing. Through our series of experiments, we found that knockdown of hsa_circ_000984 inhibited the proliferation, migration, invasion of CRC cells in vitro and tumor formation in vivo, possibly by retarding cell cycle progression (G1 phase to S phase). In consistence with previous reports [19, 43], the hsa_circ_000984 is prominently located in cytoplasm. CircRNA are widely studied to play a strong regulatory function in carcinoma through a ceRNA mechanism by acting as a sponge of miRNAs [44, 45]. Hence, with the application of bioinformatics, we first found that hsa_circ_000984 may interact with miR-106b. Further experiments and analysis discovered that hsa_circ_000984 can bind to miR-106b as a miRNA sponge, contributing to the increase of downstream target CDK6 (Figure 4E). The well-known cyclin dependent kinases (CDKs) play essential role in the cell cycle regulation. Dysregulated activation of the CDK4/6 kinases is a hallmark of a variety of carcinomas [27, 46]. Alterations of CDK6 expression have been well documented in bladder cancer and colorectal cancer tissues, respectively [26, 47].

The mRNA levels of hsa_circ_000984 and CDK6 were detected by quantitative RT–PCR using a SYBR green PCR kit (Qiagen Korea, Seoul, Korea). Total RNA was extracted using the TRIzol reagent (CW Biotech, Beijing, China) according to the manufacturer's protocol. MiRNA expression was carried out using the TaqMan miRNA assay (Applied Biosystems, Foster City, CA). Relative quantification of gene expression was normalized by the 2−ΔΔCt method relative to GAPDH and RNU6B which were used as qRT–PCR controls for genes and miRNAs. All experiments were performed in triplicate.

The anti-circ-RNA short hairpin RNAs (shRNAs) were synthesized and cloned into lentiviral vector (LV3) and were then packaged with Lentivector Packaging Plasmid mix (pGag/Pol, pRev, and pVSV-G) to establish stable cell lines as previously described [29]. Briefly, 293T Cells were cultured in a 6-well plate. The following day, cells were transfected with shRNAs plasmids and Lentivector Packaging Plasmids with Lipofectamine 2000 Reagent (Life Technologies). After 48h, the transfectants were selected with puromycin (Amresco, Cleveland, OH, USA) to gain the positive stably transfected clone with knockdown of hsa_circ_000984. The efficiency of hsa_circ_000984 knockdown was confirmed by qRT-qPCR.

The full-length of CDK6 3’-UTR containing miR-106b target site and the full-length of CDK6 3’-UTR deleted miR-106b-binding sequence were inserted downstream of the firefly luciferase gene in psiCHECK2 to create the psiCHECK2-CDK6 3’UTR-WT plasmid (WT) and psiCHECK2-CDK6 3’UTR-MU plasmid (MU), respectively. The WT and MU plasmids subsequently were co-transfected into CRC cells with miRNAs mimics, or inhibitors along with control Renilla luciferase expression plasmid (phRL-TK) using Lipofectamine 2000. After 24h, luciferase and renilla signals were assayed using the Dual-luciferase reporter Assay System (Promega, Madison, WI, USA) according to the manufacturer's protocol.

A total of 2000 stably transfected cells in 100μl medium were seeded into each well of a 96-well plate. On days 0, 1, 2 and 3, 10μl of CCK-8 reagent (Dojindo Laboratories, Kumamoto, Japan) were added each well and proliferation was assayed by a microplate reader (Thermo Scientific Multiskan FC) to detected the absorbance value at 450 nm.

For colony formation assay, a total of 200 stably transfected cells were seeded into six-well plates and cultured for 2 weeks in standard conditions. Then the colonies were washed with PBS, fixed with methanol and then stained with crystal violet. Cell number was counted by a coulter counter.

Negative control cells or treated cells with the indicated lentivirus vector with a concentration of 1×106/ml diluted in 0.1 ml PBS were injected subcutaneously on the back flank of each mouse at day 0, respectively. Tumor size was measured with a caliper every 3 days. The tumor volume was calculated using the relationship (Volume=length×width2×0.5). Tumor growth rate was determined by averaging the volume of tumors of eight nude mice. All experiment procedures were carried out in accordance with the ethical standards under a protocol approved by the Committee on Animal Welfare of Zhejiang Provincial People's Hospital of Hangzhou Medical College.

TargetScan (http://www.targetscan.org/) and miRanda (http://www.microrna.org/) was used to predict the potential miRNAs binding sites in the hsa_circ_000984 and corresponding gene CDK6 3’UTR to study the possible crossing network among circRNA, miRNA and gene.

All data are expressed as indicated by mean±SD. GraphPad Prism 5.0 (GraphPad Sotware, La Jolla, CA) was used to analyze the statistical data, where appropriate. The correlation of hsa_circ_000984 expression level and clinicopathological parameters were evaluated using t –test. The significance of hsa_circ_000984 expression level between CRC samples and matched colorectal nontumorous tissues were determined by the Student’ test, and statistical significance was set at P<0.05.

This work was supported by a grant from Public welfare project of Zhejiang science and Technology Department (2016C33G1360193).

34. Huang C, Shan G. What happens at or after transcription: Insights into circRNA biogenesis and function. Transcription. 2015; 6:61-64.