Results: 229 patients underwent lung metastasectomy, of whom 115 proceeded to surgery without chemotherapy while 114 received preoperative regimen based on oxaliplatin (32%), irinotecan (46%), capecitabine (16%), or other (6%). Median PFS in preoperative chemotherapy vs. surgery alone arms were comparable (p=0.004). Patients on oxaliplatin-based therapy had an improved OS vs. an irinotecan, capecitabine, or alternate regimen (p=.019). On multivariate analysis, the irinotecan subset had a worse OS (HR 1.846; 95% CI 1.070, 3.185) vs. surgery alone arm (p=0.028). The OS of an oxaliplatin-based regimen vs. no chemotherapy was inconclusive (HR 0.57; 95% CI 0.237 to 1.389, p=0.218). Multivariate analysis demonstrated a worse PFS and OS for the male gender and an incomplete resection (R2).

Conclusion: Prospective trials on specific preoperative regimens and criteria for patient selection may identify a role for preoperative chemotherapy prior to a curative pulmonary metastasectomy.

Pulmonary recurrence of colorectal cancer (CRC) following resection of the primary CRC lesion presents a significant clinical problem because the lung is a common site of extracolonic recurrence [1, 2]. The optimal sequence of management of pulmonary oligometastatic disease remains unclear, although emerging data indicate a role for surgical resection in patients with metastases in the lung alone. Surgical intervention for this subset of patients has been explored with reports of 11% to 41% probability of 5-year survival in patients with resection of oligometastatic pulmonary lesions [3-5]. Indeed, the significant improvement in survival after resection of pulmonary metastases in the absence of extrapulmonary disease lesions has led to the widespread clinical practice of surgical resection in these patient populations [1, 3, 5, 6]. Furthermore, improved progression-free survival (PFS) and overall survival (OS) has been noted in patients who have undergone lung metastasectomy compared to those who deferred surgery [7]. Similarly data even suggests that lung metastases are not a poor prognostic factor for survival in patients undergoing resections for both liver and lung metastases, compared to liver metastases alone [8]. However, most analyses are retrospective single institution experiences and report a wide range of 5-year survival ranging from 21% to 61%. Furthermore, OS was associated with an elevated CEA level, tumor location (unilateral vs. bilateral), and number of pulmonary metastases [9-13]. Preoperative predictors of prognosis may identify subsets of patients who may benefit from a multimodal therapeutic strategy incorporating preoperative chemotherapy prior to a potentially curative resection of oligometastatic disease. The actual benefit of preoperative chemotherapy prior to pulmonary metastasectomy, as well as the optimal regimen, are not well defined and require further analysis. Consequently, we investigate the characteristics, treatment regimens, and outcomes of patients with resected primary tumors who then underwent pulmonary metastasectomy.

Table 3: Surgical outcomes of all patients undergoing a pulmonary metastasectomy

Of the 115 patients in the surgery alone arm, 44 patients (38%) received chemotherapy postoperative after pulmonary metastasectomy. The median time from surgery to initiation of chemotherapy postoperatively was 1.5 months (95% CI 1.2, 1.8). Overall, 38 (33%) patients were treated in the absence of disease aiming to reduce the risk for disease recurrence. The remaining six patients showed evidence of active disease on their first postoperative imaging with four patients developing new pulmonary lesions, one patient with a new liver lesion, and one with new intra-abdominal adenopathy and rising CEA. Postoperatively, 19 patients received an oxaliplatin-based therapy, 13 an irinotecan containing regimen, and 11 a capecitabine-regimen. Sixteen patients received bevacizumab in conjunction with a systemic chemotherapy regimen, and two received cetuximab, one of which was as a single agent.

Of the 114 patients who received preoperative chemotherapy prior to pulmonary metastasectomy, 54 (49%) patients received chemotherapy or radiation within 3 months postoperatively; among these 54 patients, the median time from surgery to resumption of chemotherapy postoperatively was 1.5 months (95% CI 1.4, 1.7). In 37 (32%) patients, postoperative therapy was given as adjuvant therapy in the setting of no active disease with the intention of extending the recurrence-free period. The remaining 17 patients demonstrated evidence of active disease on postoperative evaluation which prompted the initiation of additional chemotherapy or radiation. Specifically, 4 patients had positive surgical margins, 5 patients had new lesions in the lungs on their first postoperative imaging. Three patients developed new hepatic lesions including one patient with concurrent new hepatic and pulmonary masses. Two patients developed enlarging lymph nodes. One patient each developed either a local recurrence at the anastomotic site of the initial colonic resection, new bone metastases, or a rising CEA.

Of the 54 patients receiving postoperative therapy, two patients received consolidative radiation therapy: one to the positive surgical margin and a second to the regional thoracic lymph node basin where one excised node was positive for malignancy. A third patient underwent radiofrequency ablation to a solitary liver lesion. The remaining 51 patients received systemic therapy, most commonly with a regimen based on irinotecan- (n=22), oxaliplatin (n=18), or capecitabine (n=9). Bevacizumab (n=19) or an anti-epidermal growth factor receptor (EGFR) targeting therapy (cetuximab or panitumumab, n=11) was given concurrently with a cytotoxic regimen.

For overall survival the median OS was not reached among patients in the surgery alone arm subset (mean OS 91.7 months, 95% CI 80.9, 102.5). Among the 4 preoperative chemotherapy arms, patients receiving an irinotecan-based regimen represented the largest subset among our patients receiving preoperative chemotherapy, thereby serving as the reference group. This irinotecan-receiving subset had a worse OS (49.6 months; 95% CI 35.3, 63.9) in comparison to any chemotherapy regimen (p 0.024). Patients receiving an oxaliplatin-based therapy demonstrated an improved OS in comparison to an irinotecan-based therapy group with a mean OS 81.0 months (95% CI 67.7, 94.4, p = 0.019) (Figure 1); the median OS has not yet been reached in the oxaliplatin-group. Patients receiving a capecitabine-based regimen demonstrated a median OS of 64.0 months (95% CI 52.9, 75.1) while patients on other systemic therapies did not reach median OS (mean OS 50.3 months, 95% CI 30.7, 69.8). 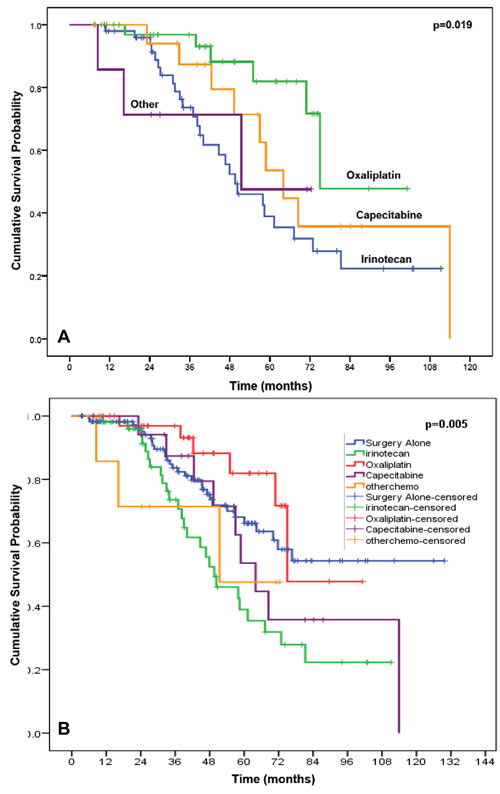 Figure 1: Kaplan-Meier curve demonstrating that the overall survival of patients in the 4 preoperative chemotherapy arms (p<.019), using the irinotecan-based therapy group as reference (A) and the surgery alone group as the reference (B).

Table 5: Multivariate cox regression analysis of overall survival across the surgery alone arm and the 4 arms of preoperative chemotherapy regimen

Adjusted for age at time of pulmonary metastasectomy, gender, size of largest pulmonary lesion, # of lung metastases and type of resection. 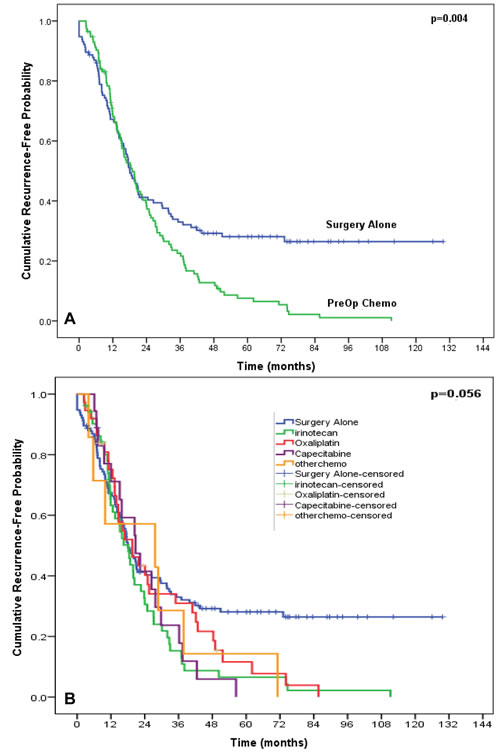 Aggressive surgical intervention in pulmonary oligometastatic disease has shown in previous retrospective non-randomized studies to provide a 5-year survival as high as 50% with a subset of patients being cured after resection of their pulmonary metastases [2, 3, 6, 13-15]. However, the exact role for preoperative chemotherapy with surgically resectable pulmonary oligometastatic disease in CRC patients has not been previously established. The characteristics of treatment failure after pulmonary metastasectomy where there is subsequent recurrence of disease may suggest that a multimodality approach may potentially improve the duration of recurrence-free survival in these patients [10, 16-18]. Our exploratory analysis suggests a potential role for an oxaliplatin-based regimen if preoperative therapy is considered prior to a potentially curative pulmonary metastasectomy thereby improving overall survival benefit in comparison to an irinotecan or capecitabine-based regimen. In the current study, the use of bevacizumab did not provide any additional benefit.

Patient selection for preoperative chemotherapy prior to resection of lung metastases remains an area of investigation. One independent analysis of our current study’s patient population investigated clinical predictors of recurrence in the lung among patients after their initial CRC pulmonary metastasectomy; this work has demonstrated increasing number of lung metastases and a shorter preoperative disease free interval as predictors of increased risk for lung recurrence [12]. Furthermore, the same analysis characterized increasing age (greater than 60 years) and the male gender to independently predict shorter survival with the lowest overall survival identified among men older than 60 years of age with greater than 3 metastatic lesions in the lung (35.7 months, P <0.001) [12]. Indeed, the number of pulmonary metastases has predicted for shorter overall survival in several large series [9, 11, 18, 19]. Indeed our analysis is limited by unmeasured confounding variables including performance status and comorbidities and their potential role in influencing patient selection for preoperative chemotherapy prior to a curative pulmonary metastasectomy. Additional factors limiting our analysis include the single institution, retrospective nature of the study in which characteristics of the disease and chemotherapy regimen was captured. However, there is homogeneity in the surgical selection for this patient population.

This exploratory analysis provides insight regarding possible therapeutic approaches to this subset of patients with oligometastatic disease in the lung with features portending for a shorter PFS and OS. Additionally, there is little literature that has clearly defined the appropriate multimodality approach to this patient population. The findings of favored overall survival after having received an oxaliplatin-based regimen when compared to no preoperative chemotherapy, remains to be investigate. Upcoming trials on specific preoperative regimens and criteria for patient selection are needed and planned. An ongoing prospective phase III trial is the first such to randomize patients with a prior resected colorectal cancer to active monitoring or active monitoring with pulmonary metastasectomy; primary endpoints include overall survival, relapse-free survival, and patient-reported quality of life [20-24]. Another planned prospective phase II study (ACCLAIM) also aims to address this very issue with concurrent molecular correlatives. Further investigation into patient characteristics may reveal patterns of recurrence that can facilitate patient selection for the most appropriate preoperative chemotherapy. Furthermore, molecular marker analysis may provide additional information regarding the primary tumor, site of metastatic disease or disease recurrence. We propose prospective pulmonary metastasectomy trials incorporating such selection may identify the subset of patients most likely to benefit from multidisciplinary approach to pulmonary oligometastatic disease.

We queried a prospectively maintained thoracic surgery database at the University of Texas MD Anderson Cancer Center for patients with CRC who underwent their first pulmonary metastasectomy at our institution from January 1, 2000, to December 3, 2010. Eligibility criteria included the presence of unilateral or bilateral resectable lung lesions on preoperative CT scan of the chest without local colorectal recurrence or distant extrahepatic disease; the primary colorectal tumor was surgically removed with an R0 resection; treatment-naïve to systemic chemotherapy prior to lung resection. Prior resected or patients who had surgically resectable hepatic metastases were not excluded. Preoperative chemotherapy was defined as chemotherapy delivered within the 3 months before metastasectomy and not given in the adjuvant setting after resection of their primary colonic lesion.

Patients were classified as having received a preoperative regimen based on oxaliplatin, irinotecan, capecitabine, or other. Patients were allowed to receive their preoperative chemotherapy outside the institution for added convenience to the patient. All patients were required to receive clinical evaluation by the Department of Thoracic Surgery and all diagnostic imaging at MD Anderson Cancer Center. The resected pulmonary tumor size was defined as the maximal diameter on a computed tomography scan in centimeters. In the case of multiple pulmonary metastases, the diameter of the largest lesion was noted to represent the tumor size. The institutional review board granted an approval for this study with a waiver of patient consent.

The multivariate analysis using the Cox proportional hazards model after backward stepwise Wald elimination was conducted using the chemotherapy regimen and clinical variables found to be significant on univariate analysis, defined as a probability value of less than 0.25. A p value of less than 0.05 on multivariate analysis was considered significant. We used Kaplan-Meier curves, Cox regression analysis and Mantel-Cox pairwise comparisons to compare the PFS and OS among the groups of patients receiving various chemotherapy regimens using the subset of patient receiving an irinotecan-based regimen or the surgery alone arm as the reference group as specified. All analyses were conducted using SPSS version 19.0 (SPSS Inc, Chicago, IL).