Liver inflammation is closely associated with metabolic syndrome. Oxidative stress plays a synergistic role in inflammation by activating nuclear factor kappa B (NF-κB) signaling in the liver. Therefore, substantial efforts have been made to develop compounds that inhibit the generation of oxidative stress and activation of NF-κB. We synthesized twenty-six novel 5-(substituted benzyl)-2-oxo- and 5-(substituted benzyl)-2-thioxo-dihydropyrimidine-4,6(1H,5H)-dione derivatives for the development of potential antioxidants and examined their biological activities in vitro and in vivo. Thio-barbiturate-derived compounds 5-[4-hydroxy-3-methoxybenzy]-2-thioxodihydropyrimidine-4,6[1H,5H]-dione (2d) and 5-[4-hydroxy-3,5-methoxybenzy]-2-thioxodihydropyrimidine-4,6[1H,5H]-dione (2l) had the strongest inhibitory effect on reactive oxygen species and peroxynitrite generation in vitro. Furthermore, oral administration of compounds 2d and 2l in mice notably suppressed lipopolysaccharide (LPS)-induced oxidative stress and NF-κB activation in the liver. Because macrophages play an essential role in liver inflammation, we investigated the effects of these compounds on inflammatory signaling in LPS-induced RAW264.7 macrophages. LPS-induced NF-κB activation and protein expression of cyclooxygenase 2 and inducible nitric oxide synthase were inhibited by pretreatment of these compounds in macrophages. In parallel with this finding, the phosphatase and tensin homolog deleted on chromosome 10 (PTEN) and AKT signalings, which are upstream activators of p65, were decreased by these compounds in macrophages. Our study suggests that compounds 2d and 2l inhibit oxidative stress and NF-кB-mediated inflammation, at least partially, through suppressing PTEN/AKT signaling. Therefore, these compounds may be useful as therapeutic agents for the amelioration of inflammatory diseases.

Lipopolysaccharide (LPS) induces secretion of pro-inflammatory cytokines by activating macrophages, which play a causal role in acute and chronic inflammation [1]. As liver inflammation is closely associated with hepatic cirrhosis, liver lesion, hepatic fibrosis, and liver cancer, treatment of inflammation is an important strategy for decreasing them [2–4]. Macrophages are a major immune cell population in the liver and play an essential role in liver inflammation-related diseases [1, 5]. Macrophages can be activated in response to various inflammatory stimuli, including LPS [6–8].

The phosphatase and tensin homolog deleted on chromosome 10 (PTEN) is a widely expressed protein phosphatase [9]. Since various studies have reported that PTEN is frequently mutated or deleted in a variety of human cancers, PTEN has been considered as a tumor suppressor gene [9, 10]. In addition, PTEN is associated with reactive oxygen species (ROS)-mediated inflammatory signaling [11]. ROS increases autophosphorylation of PTEN and thereby inhibits its phosphates activity. As a result, activated AKT stimulates nuclear factor kappa B (NF-κB)-mediated inflammation [12].

Basally, inactive NF-κB is localized to the cytoplasm after forming a complex with an inhibitor of kappa B (IκB), an inhibitory factor of NF-κB [13, 14]. Upon stimulation, activated AKT phosphorylates and activates inhibitor of kappa B kinase (IKK), which phosphorylates IκB [15]. Then, phosphorylated IκB is dissociated from NF-κB, and activated NF-κB is translocated to the nucleus, where it interacts with specific DNA binding sites to induce inflammatory gene transcription including, inducible nitric oxide synthase and cyclooxygenase 2 [16, 17].

Because there is a close relationship between oxidative stress and inflammation, we synthesized novel compounds with antioxidant activity. Of these compounds, we screened 5-[4-hydroxy-3-methoxybenzy]-2-thioxodihydropyrimidine-4,6[1H,5H]-dione (2d) and 5-[4-hydroxy-3,5-methoxybenzy]-2-thioxodihydropyrimidine-4,6[1H,5H]-dione (2l) and further studied their anti-inflammatory properties and underlying mechanisms using C57BL/6 mice and RAW264.7 macrophages after LPS treatment.

Screening of compounds 2d and 2l as ROS and ONOO- scavengers

Reactive oxygen species (ROS) and peroxynitrite (ONOO-) play a critical role in liver inflammation by regulating the expression of pro-inflammatory cytokines [18]. We examined the effects of 26 5-(substituted benzyl)-2-oxo- and 5-(substituted benzyl)-2-thioxo-dihydropyrimidine-4,6(1H,5H)-dione derivatives (Table 1) on ROS and ONOO- production in vitro after 3-morpholinosydnonimine (SIN-1) stimulation. The well-known ROS inhibitor trolox and the ONOO- inhibitor penicillamine were used as positive controls (Figure 1C-1D). Of these derivatives, compounds 2d and 2l were screened further because their ROS and ONOO- scavenging activities were greater than those of the positive controls (Figure 2A-2B). We examined the dose-dependent effects of these compounds on ROS and ONOO- scavenging activity and found that compounds 2d and 2l dose- dependently inhibited SIN-1-induced ROS and ONOO- generation in vitro (Figure 2A-2B), suggesting that these compounds inhibit SIN-1-mediatied oxidative stress. 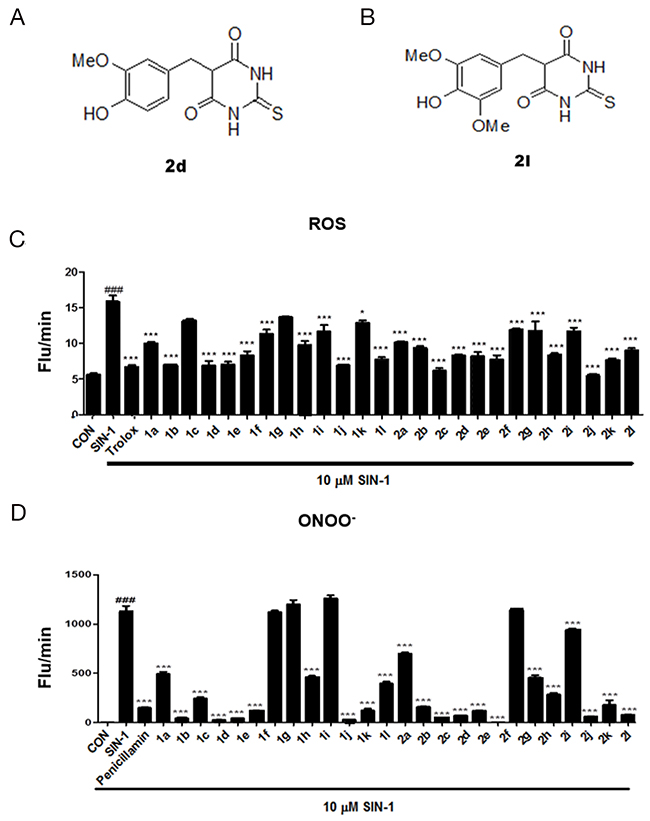 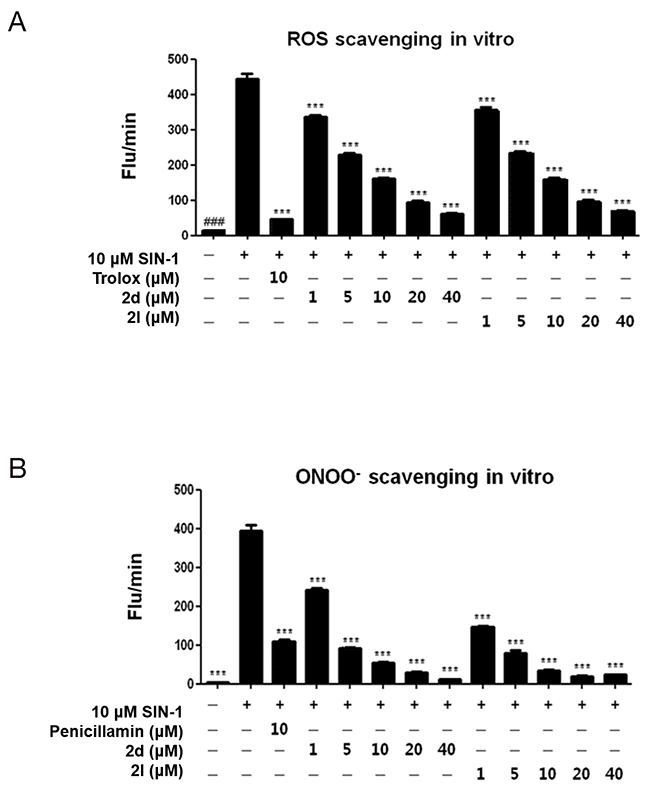 Figure 2: Effects of compound 2d or compound 2l treatment on ROS and ONOO- scavenging in vitro. (A) ROS and (B) ONOO- were measured in vitro using DCFDA and DHR123, respectively. Trolox and penicillamine were used as a known ROS and ONOO- inhibitor, respectively. The data are shown as the mean ± SEM (n=5). Statistical results of one-way ANOVA, followed by the Dunnett’s test: ###p < 0.001 vs. a control group, ***p < 0.001 vs. a SIN-1-treated group.

To investigate whether compounds 2d and 2l affect antioxidant and anti-inflammatory signaling in the liver, each compound 2d and 2l (0.2 μM and 1 μM) was delivered to C57BL/6 mice by oral gavage prior to an intraperitoneal injection of lipopolysaccharide (LPS) (5 mg/kg). We examined oxidative stress and its downstream nuclear factor kappa B (NF-κB) activity. ONOO- levels were significantly increased in the LPS-injected group compared to the non-injected group, but pretreatment with compounds 2d and 2l dose-dependently inhibited LPS-induced increases in ROS and ONOO- levels in the liver (Figure 3A-3B), indicating that these compounds inhibited LPS-induced oxidative stress. Because oxidative stress is closely associated with LPS-induced activation of NF-κB signaling, we studied whether the compounds affect NF-κB protein expression and activity. Compounds 2d and 2l at 1μM significantly decreased protein levels of p65 and phosphorylated p65 (Ser536) in the nucleus of the liver (Figure 3C), indicating that the compounds inhibited NF-κB signaling. Considering the close relationship between oxidative stress and NF-κB activation, compound 2d- and compound 2l-mediated inhibition of NF- κB may be associated with the suppression of oxidative stress. 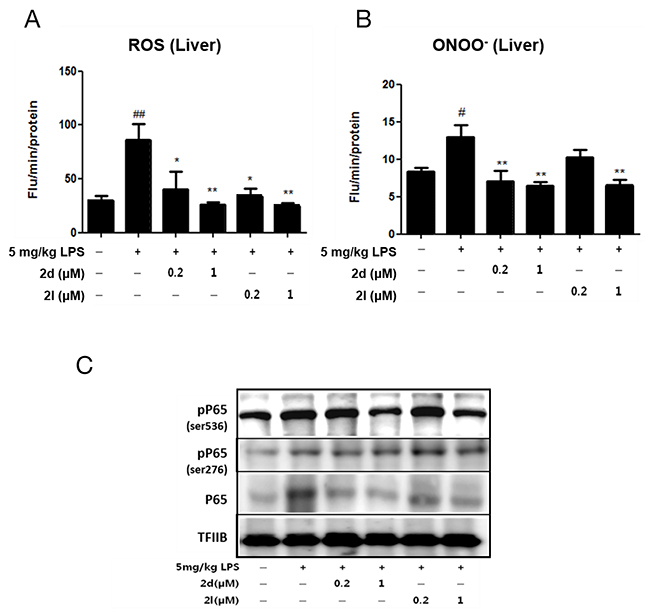 Figure 3: Compounds 2d and 2l ameliorate inflammation in lipopolysaccharide (LPS)-induced liver injury. Different concentrations of compounds 2d and 2l (0.2 μM or 1 μM) were orally administered (PO) to C57BL/6 mice, and 2 h later, mice were treated with LPS (5mg/kg). Mice were sacrificed 1h after the LPS injection (n=5/group). Inhibitory effects of compounds 2d and 2l on (A) ROS levels and (B) ONOO- levels. (C) Western blotting was performed to examine the effects of compounds 2d and 2l on p-p65 (ser536), and p65 in the nucleus of the liver. Transcription Factor II B (TFIIB) was used as a loading control for the nucleus. The data are shown as the mean ± SEM. Statistical results of one-way ANOVA followed by the Dunnett’s test : #p < 0.05, ##p < 0.01 vs. a control mice, *p < 0.05, **p < 0.01 vs. LPS-treated mice. 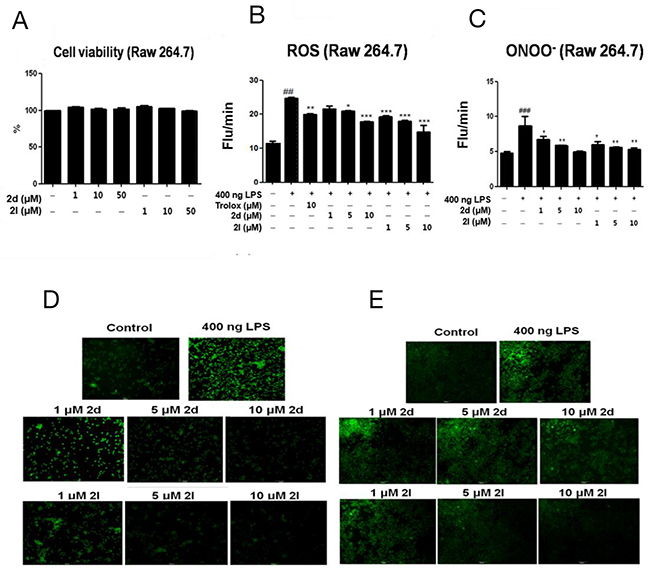 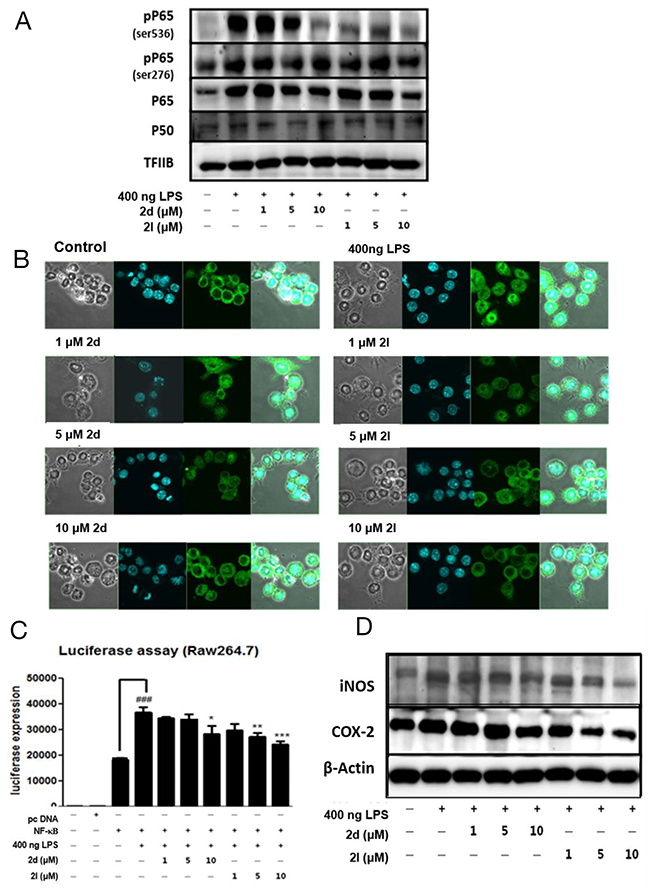 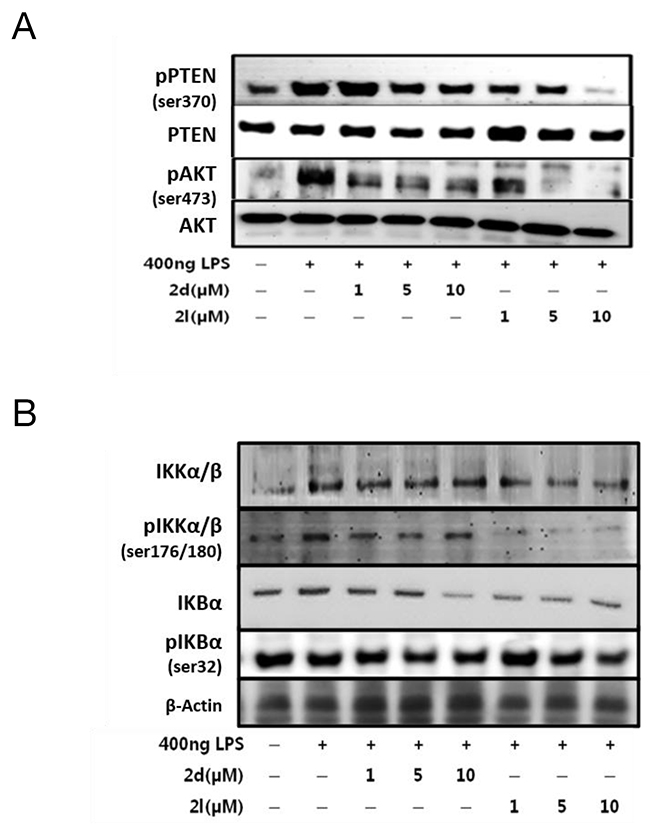 Figure 6: Effects of compounds 2d and 2l on AKT/NF-κB signaling in LPS-stimulated RAW264. 7 cells. Western blotting was performed to detect protein levels of (A) PTEN and AKT, and (B) IKKα/β and IKbα in Raw264.7 cells. β-Actin was used as the loading control.

Our study focused on the compounds 2d and 2l based on stronger ROS and ONOO- scavenging activities than other compounds. However, most of the 5-(substituted benzyl)-2-oxo- and 5-(substituted benzyl)-2-thioxo-dihydropyrimidine-4,6(1H,5H)-dione derivatives significantly decreased SIN-1-induced ROS and ONOO- production. Because the antioxidative effects of compounds 2d and 2l are closely related to the decreased inflammatory signaling, other compounds may also ameliorate inflammation in the liver. Furthermore, it is necessary to examine structural mechanisms by which thio-barbiturate-derived compounds exhibit strong antioxidative activity.

The study showed that the compound 2d- or 2l suppressed NF-κB signaling in macrophages post LPS treatment, but it may not be the only mechanism underlying the compound-mediated decrease in the liver inflammation. Because there are reports that other cell types in the liver including hepatocytes, lymphocytes, dendritic cell, and sinusoidal endothelial cells are also important mediators of inflammation [24]. Thus, it is likely that the anti-inflammatory effects of the compounds 2d and 2l in the liver is not only caused by its effect on macrophages but also arise from its effect on other cell types.

All animal experiments were approved by the Pusan National University-Institutional Animal Care and Use Committee (PNU-IACUC). C57/BL6 male mice (weight 30-32 g, 6 weeks of age) were purchased from Japan SLC (Hamamatsu, Japan). This study followed the Guide for Animal Care and Use issued by the Institute of Laboratory Animal Resources (ISBN 0-309-05377-3). Fifty C57/BL6 mice were assigned to one of the following six groups: 1) a saline injected group (the control group, n=5); 2) a 5 mg/kg LPS group (the LPS group, n=5); 3-4) two compound 2d (at 1or 5 μM) plus 5 mg/kg LPS groups (compound 2d+LPS groups, n=5); and 5-6) two compound 2l (at 1or 5 μM) plus 5 mg/kg LPS groups (compound 2l+LPS groups, n=5). Saline, compound 2d, and compound 2l were administered 2 h prior to LPS (or saline for the control group) treatment. Mice were dissected 2 h after LPS treatment.

Briefly, RAW264.7 cells were seeded at 1.5 x 104 cells per/well in 96-well plates and then incubated at 37°C for 24 h and treated with samples. Cell viability was measured by the EZ-cy tox cell viability Assay kit (Daeil Lab Service, Seoul, Korea) as previously described.

ROS generation was measured using a fluorescence probe, as previously described. Briefly, 50 μM 2′,7′-dichlorodihydrofluorescein diacetate (DCFDA) was added to homogenates for a final volume of 250 μl. Changes in fluorescence were detected with a GENios plate reader (Tecan Instruments, Salzbrug, Austria) with excitation and emission wavelengths set at 485 and 530 nm, respectively. In addition, changes in ROS level were detected using a laser-scanning confocal microscope on RAW264.7 cells seeded at 2 X 105 cells/well in a 6-well cell culture dish.

ONOO- generation was examined by measuring the oxidation of dihydrorhodamine (DHR123). Briefly, liver homogenate (10 μl) was mixed with the rhodamine solution (50 mM sodium phosphate buffer, 90 mM NaCl, 5 mM diethylene-triamine pentaacetate [DTPA], and DHR 123) to a final volume of 200 μl. Changes in fluorescence intensity were measured every 5 min for 30 min using a fluorescence plate reader at excitation and emission wavelengths of 485 and 530 nm, respectively. In addition, the fluorescence of ONOO− generated in the cytoplasm of RAW264.7 (2 X 105 cells/well) was directly confirmed using a laser-scanning confocal microscope.

For luciferase assays, 1μg of plasmid was transfected into RAW264.7 cells (5×104 cells per well) seeded in a 24-well plate in 500 μL of DMEM supplemented with 10 % FBS at 37 °C in a humidified 95 % air/5 % CO2 atmosphere. Cells were transfected with Lipofectamine transfection reagent, and the plasmids used for transfection contained the NF-κB- luciferase reporter vector. After 12 h of transfection, cells were washed and treated with compounds 2d and 2l for 6 h. Luciferase activity was detected using the One-Glo luciferase assay system (Promega, Madison, WI, USA) and measured using a Tecan GENios luminescence plate reader.

All results are expressed as means ± standard error of the means (SEM). One-way analysis of variance (ANOVA) was performed to analyze significant differences among all groups. Dunnett’s test was used to determine the significance between group means. An associated probability (p-value) of <0.05 was considered statistically significant.

This work was supported by the National Research Foundation of Korea (NRF) grant funded by the Korea government (MSIP) (No. 2009-0083538). This work was also supported by Grant K17281 from the Korea Institute of Oriental Medicine, Ministry of Education, Science and Technology (MEST), Republic of Korea. We also thank the Korea Aging Tissue Bank for providing research materials.