Lower risk of liver cancer in patients with schizophrenia: a systematic review and meta-analysis of cohort studies

We followed the Meta-analysis of Observational Studies in Epidemiology (MOOSE) [26] and Cochrane’s Handbook [27] guidelines throughout the design, implementation, analysis, and reporting for this study.

The PubMed and Embase databases were systematically searched for relevant studies with the terms “schizophrenia,” “schizophrenic,” “psychosis,” combined with “liver,” “hepatic,” and “cancer,” “tumor,” “neoplasm,” or “carcinoma.” The search results were limited to studies in humans and published in the English language. We also manually screened the reference lists of the original and review articles. The final literature search was performed on July 14, 2017.

To be included in the current meta-analysis, the studies must have fulfilled the following criteria: 1) articles were full-length and written in English; 2) the studies were designed as cohort studies (prospective or retrospective, regardless of the sample size and follow-up duration); 3) an adult population (≥ 18 years of age) was included; 4) schizophrenia was identified as exposure at baseline; 5) the general population without a diagnosis of schizophrenia was used as a control; 6) the incidence of liver cancer on follow-up was documented; and 7) the adjusted standardized incidence ratios (SIRs, at least adjusted for age and gender) and their corresponding 95% confidence intervals (CIs) for liver cancer incidence in schizophrenic patients as compared with controls were reported. The diagnostic criteria of schizophrenia and the confirmation of liver cancer cases were consistent with those applied in the original articles. If studies with overlapping participants were encountered, the reports with a larger sample size were included in the current meta-analysis. Abstracts, letters to the editor, reviews, and studies with designs other than a cohort study were excluded from the current study. Studies reporting liver cancer-related mortality were also excluded because many factors, such as the comorbidities and treatments between patients with schizophrenia and controls, may further confound the results.

Two independent authors performed the literature search, data extraction, and quality assessment, according to the predefined inclusion criteria. Discrepancies were resolved by consensus. Data regarding the publication information (name of first author, year of publication, and country where the study was performed), patient characteristics (numbers, sources of the study populations), follow-up information (years of follow-up, numbers of liver cancer cases), and other characteristics (e.g., whether cases of cancer incidence before the diagnosis of schizophrenia were excluded) were extracted. The Newcastle-Ottawa Scale [28] was used to evaluate the quality of the included studies. This scale ranges from 1 to 9 stars and judges each study regarding the aspects of selection of the study groups, the comparability of the groups, and the ascertainment of the outcome of interest.

Data of SIRs and their corresponding standard errors were calculated from 95% CIs or p values, and were logarithmically transformed to stabilize variance and to normalize the distribution. The Cochrane’s Q test [27] and I2 test [29] were used to evaluate the heterogeneity among the included cohort studies. A significant heterogeneity was considered if I2 > 50%. A random-effects model was used for the meta-analysis of the SIR data because this model is considered to produce a more generalized result via incorporation of the potential heterogeneity [30]. Subgroup analyses were performed to evaluate whether the gender of the participants significantly affected the association between schizophrenia and liver cancer. Potential publication bias was assessed by funnel plots with the Egger regression asymmetry test [31]. The nonparametric “trim and fill” procedure was also performed to further assess the possible effect of publication bias in our meta-analysis. This method considers the possibility of hypothetical “missing” studies that might exist, imputes their SIRs, and recalculates a pooled SIR that incorporates the hypothetical missing studies as though they actually existed [27]. RevMan (Version 5.1; Cochrane Collaboration, Oxford, UK) and STATA software (Version 12.0; Stata Corporation, College Station, TX) were used for the statistical analyses.

The flowchart of the literature search strategy is summarized in Figure 1. Briefly, 801 articles were identified after the initial database search, and 768 articles were excluded after screening via titles and abstracts, mainly because they were irrelevant to the aim of the study. For the [33] studies that underwent full-text review, [26] were excluded mostly because they did not report the outcomes of liver cancer incidence. Finally, seven studies [19–25] were included. 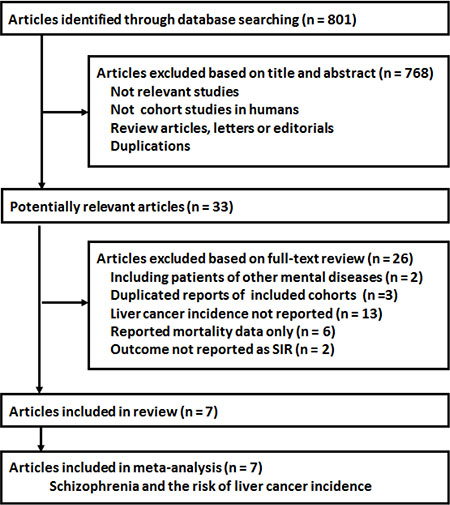 Figure 1: The flowchart of the literature search strategy.

Overall, seven database-based retrospective cohort studies [19–25] were included, with 312,834 patients with schizophrenia. The characteristics of the studies are presented in Table 1. Four of the studies were performed in Europe [19–21, 23], while the other three were in Asia [22, 24, 25]. Five studies included hospitalized patients with schizophrenia [20, 21, 23, 25], while the other two did not specify the source of the patients [22, 24]. The years of follow-up of the included studies varied from 1963 to 2010. A total of 581 cases of liver cancer were recorded during the follow-up period. Five of the studies [20, 22–25] excluded patients with cancer events before the diagnosis of schizophrenia, while the other two did not [19, 21]. Gender-specified SIRs of liver cancer were available from five cohorts [20, 22–25]. The qualities of the included studies were generally good, with a Newcastle-Ottawa Scale score between 6 and 8. 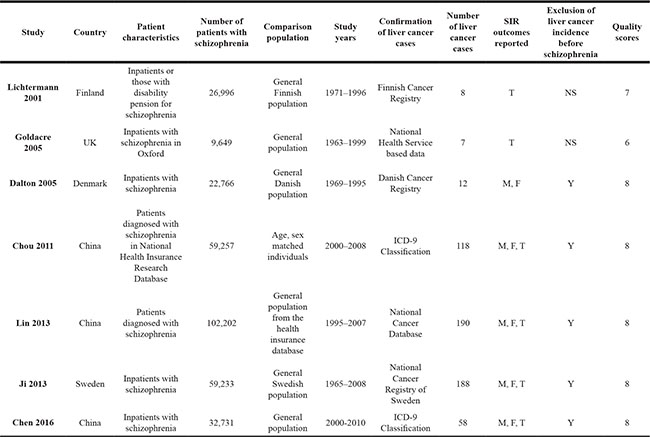 Schizophrenia and the incidence of liver cancer in the overall population 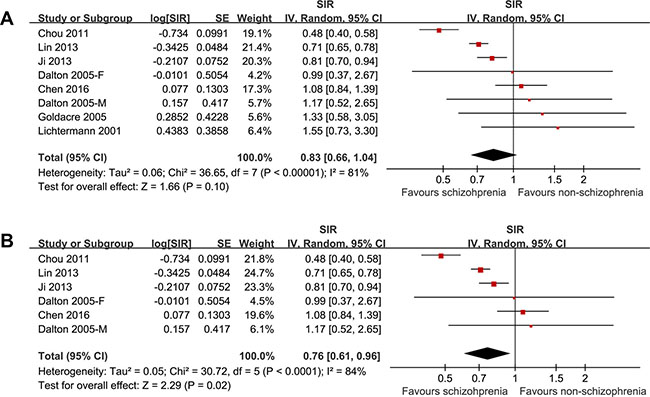 Figure 2: The pooled results of the seven cohorts showed that schizophrenia was associated with a trend of a lower liver cancer incidence with significant heterogeneity.

Schizophrenia and the incidence of liver cancer stratified by gender 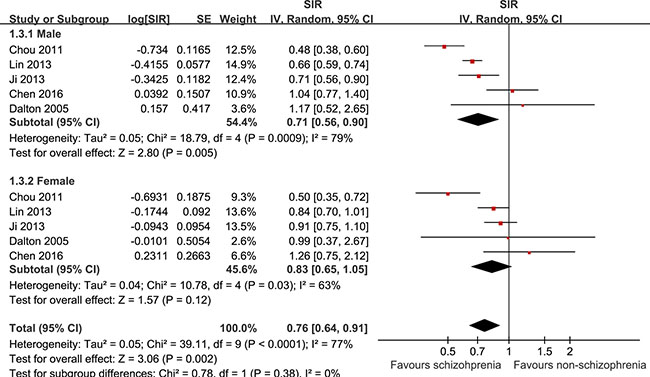 The funnel plot for the association between schizophrenia and lung cancer for all participants was asymmetric on visual inspection (Figure 4A), and the results of the Egger regression test also indicated a potential publication bias (p = 0.04). After introducing three hypothetical studies by “trim and fill” analysis, the funnel plot became symmetric, and the meta-analysis incorporating the three hypothetical studies showed similar results (SIR: 0.76, 95% CI: 0.64–0.91, p = 0.006; I2 = 77%; Figure 4B). 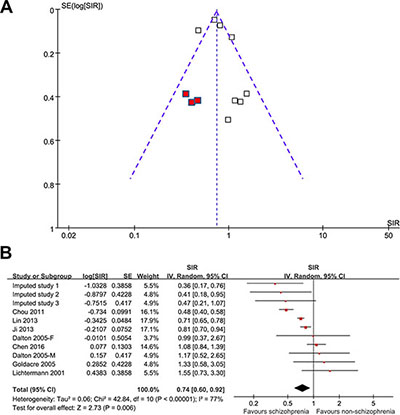 Figure 4: The funnel plot for the association between schizophrenia and lung cancer.

The results of our study may have important implications for future studies. First, a lower incidence of liver cancer in patients with schizophrenia was confirmed in our study despite the fact that these patients had a higher prevalence of conventional risk factors for liver cancer, such as alcohol consumption and hepatitis B or C. These findings suggest that the high prevalence of the above risk factors may confound the potential association between schizophrenia and liver cancer risk, which should be confirmed in large cohort studies with the adequate adjustment for the alcohol drinking habits and hepatitis B or C prevalence. Moreover, the results of our study highlight the previous paradox of a lower cancer incidence but higher cancer mortality in patients with schizophrenia. In view of the fact that patients with schizophrenia have been found to have poor accessibility to healthcare facilities, these results underline the importance for the improvement of early cancer screening and prevention in these patients [37], which may substantially improve the clinical prognosis of these patients.

Our study has some limitations that should be considered when interpreting the results. First, as mentioned previously, conventional risk factors such as the prevalence of alcohol consumption and the incidence of hepatitis B or C were not adjusted in the included studies when presenting the results. Whether these factors confound the results deserves further investigation. Moreover, many other clinical characteristics of the participants that may also affect the risk of liver cancer, such as the body mass index, occupational information, and dietary habits, were also not controlled in the included studies, which may also confound the association between schizophrenia and liver cancer incidence. In addition, significant heterogeneity was detected, which may be caused by differences of other factors besides the above confounding factors, such as differences of diagnostic criteria for schizophrenia and liver cancer, different medications administered for schizophrenia, and different strategies used to confirm the liver cancer cases. Finally, although we used “trim and fill” analysis to include hypothetical studies, a significant publication bias remained. The results of our meta-analysis should be confirmed in large cohort studies.

The current evidence suggests that the diagnosis of schizophrenia at baseline may be protective for the subsequent risk of liver cancer incidence. Future cohort studies with a large sample size and well-controlled confounding factors are needed to confirm our findings.

The authors have declared that they have no potential conflicts of interest.

6. Chang CK. Impact of additive alcohol and substance use disorders on the mortality of people with schizophrenia and mood disorders. Evid Based Ment Health. 2016; 19:55.

28. Wells GA, Shea B, O’Connell D. The Newcastle-Ottawa Scale (NOS) for assessing the quality of nonrandomised studies in meta-analyses. 2010. http://www.ohri.ca/programs/clinical_epidemiology/oxford.asp.