Ischemia-reperfusion causes severe neuronal damages in the process of stroke and other neurological diseases [1, 2]. Oxygen and glucose deprivation (OGD) insult, followed by re-oxygenation (OGDR), is applied in cultured neuronal cells to mimic the pathological condition of ischemia-reperfusion injuries [3–6]. Recent studies have suggested that OGDR mainly induces necrosis, but not apoptosis, in neuronal cells [5, 7, 8].

Necrosis is traditionally known as a passive cell death behavior. Recent studies, however, have suggested that cell necrosis could also be an active course [7–10]. This active process, also known as “programmed necrosis”, is mitochondrial dependent [7–10]. p53 is required in mediating the programmed necrosis pathway [7–10]. A number of stimuli, including hypoxia, calcium overload, UV radiation, and oxidative stresses, were able to induce p53 translocation to mitochondria, and it forms a complex with cyclophilin D (Cyp-D) [7–10]. The complexation will dictate Cyp-D translocation to inner mitochondrial membrane [11–13], causing mitochondrial depolarization, cytochrome C (Cyto-C) release, as well as reactive oxygen species (ROS) production, and eventually cell necrosis [14–16]. Pharmacological inhibition or genetic silence of the Cyp-D-P53 complex could efficiently protect cells from the above stimuli [14–16]. Several known Cyp-D inhibitors, including sanglifehrin A (SfA) and cyclosporine A (CsA), were shown to recue cells from programmed necrosis [14–16]. 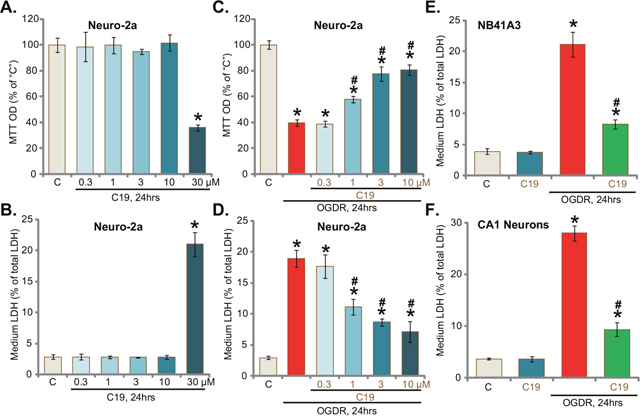 If Cyp-D is the primary target of C19, it should be ineffective in the Cyp-D-silenced cells. To test this hypothesis, shRNA strategy was applied to knockdown Cyp-D in Neuro-2a cells. The Cyp-D-shRNA lentiviral particles were added to cultured Neuro-2a cells, and puromycin was then added to establish the stable cells. Results from both the quantitative real-time PCR assay (“qRT-PCR” assay) and Western blotting assay confirmed dramatic Cyp-D knockdown (over 90%) in the stable Neuro-2a cells with the targeted shRNA (Figure 2A). Adding C19 failed to change Cyp-D protein/mRNA expression (Figure 2A). As demonstrated, stable Neuro-2a cells with Cyp-D shRNA were largely protected from OGDR (Figure 2B and 2C). Cyp-D-induced viability reduction (MTT OD decrease, Figure 2B) and cell death (LDH release, Figure 2C) were largely attenuated in Cyp-D-silenced Neuro-2a cells. These results support that Cyp-D is required for OGDR-induced cytotoxicity in neuronal cells. Remarkably, C19 was unable to further protect Cyp-D-silenced Neuro-2a cells from OGDR (Figure 2B and 2C). These results imply that Cyp-D should be the primary target protein of C19 in Neuro-2a cells. 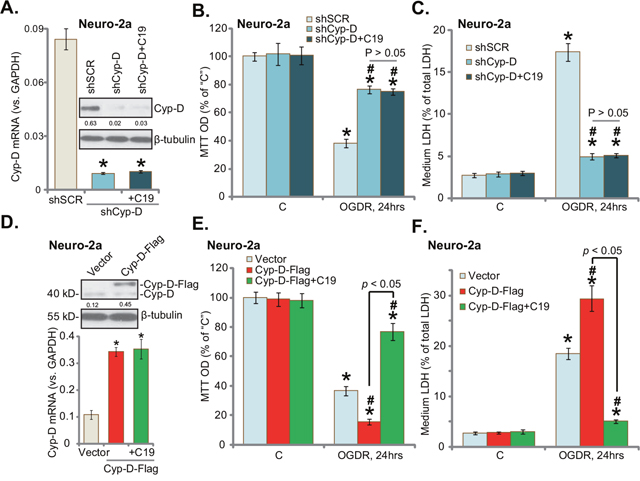 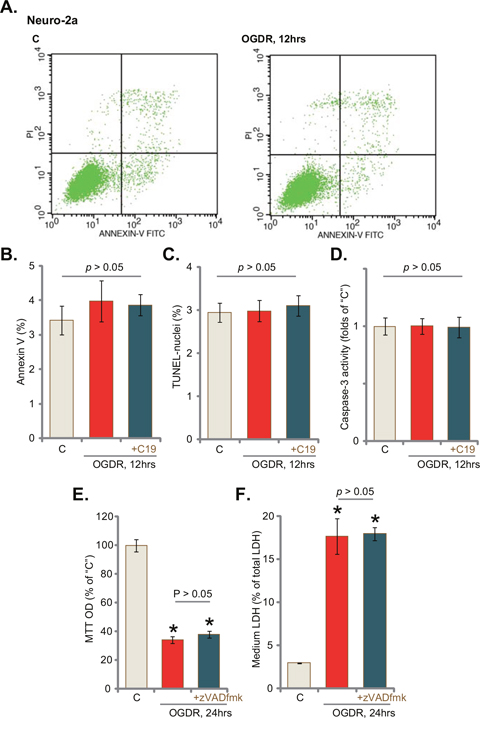 The above-mentioned results proposed that there should be a non-apoptotic form of cell death following OGDR treatment. Recent studies have proposed a mitochondria-dependent active necrosis pathway, also named as programmed necrosis, that can be induced under many stress conditions. Different stresses, including hypoxia, calcium overload, and oxidative stress, could lead to p53 mitochondrial translocation, which associates with the local protein Cyp-D [3, 20–23]. Thereafter, Cyp-D-p53 association triggers mitochondrial depolarization, cytochrome C release and cell necrosis (but not apoptosis) [3, 20–23]. Here, the mitochondria immunoprecipitation (“Mito-IP”) assay results confirmed the association between Cyp-D and p53 in the mitochondria of OGDR-treated Neuro-2a cells (Figure 4A). Such association was not observed in the control Neuro-2a cells (Figure 4A). Notably, Cyp-D-p53 association was followed by cytochrome C release to cytosol (Figure 4B) and mitochondrial depolarization (JC-1 green fluorescence intensity increase, Figure 4C). Remarkably, such effects were largely inhibited by pre-treatment with C19 (Figure 4A–4C). Based on the results above, we would propose that C19, as a Cyp-D inhibitor, likely blocked programmed necrosis pathway, and protected neuronal cells from OGDR (Figure 4A–4C). Importantly, LDH release (See Figures 1–3) in OGDR-treated cells is also a characteristic marker of cell necrosis, but not apoptosis. 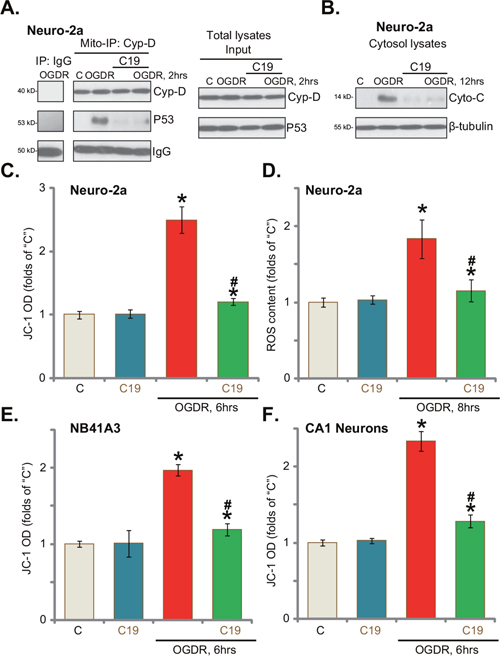 We also compared the activity of C19 with other known Cyp-D inhibitors, including cyclosporin A (CsA) [24] and sanglifehrin A (SfA) [25]. Results demonstrated that pre-treatment for 30 min with CsA (10 μM) or CsA (10 μM) also attenuated OGDR-induced Neuro-2a cell viability reduction (Figure 5A) and cell death (Figure 5B). Yet, the same concentration of C19 (10 μM) showed highest efficiency in protecting Neuro-2a cells (Figure 5A and 5B). Thus, C19 is apparently more potent in attenuating OGDR damages than the known Cyp-D inhibitors (CsA and SfA). Further studies demonstrate that C19-induced inhibition on mitochondrial depolarization (JC-1 OD increase) in OGDR-treated cells was also more potent than CsA or SfA (Figure 5C). Therefore, targeting Cyp-D by C19 is quite efficient in shutting down the programmed necrosis pathway. Notably, as shown in Figure 5D, C19-mediatd cytoprotection against OGDR in CA1 hippocampal neurons was also most efficient among all tested Cyp-D inhibitors. 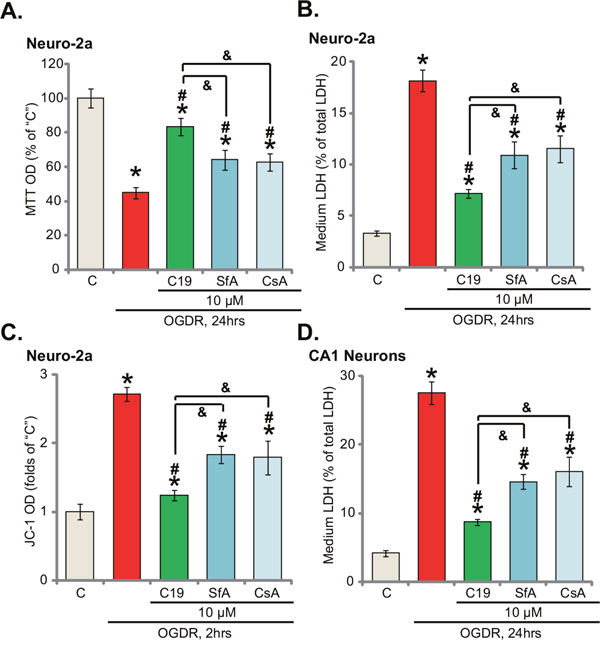 p53 is critical in mediating cell apoptosis [26–30]. Intriguingly, very recent studies have demonstrated that p53 is also actively involved in cell necrosis, a process that is known as “programmed necrosis” [23, 31, 32]. Following different stimuli, i.e. hypoxia, calcium overload, UV radiation, and oxidative stresses, p53 translocates to mitochondria, and forms a complex with Cyp-D. This Cyp-D-p53 association in the mitochondria is essential for the mitochondrial depolarization, following mitochondrial transition pore opening (mPTP) opening [9], and more importantly, subsequent cell necrosis (but not apoptosis) [23, 31, 32]. Genetic or pharmacological inhibition of Cyp-D-p53 complex could then efficiently protect cells from above stresses [23, 31, 32].

As compared to other known Cyp-D inhibitors (i.e. CsA [33] and SfA [25]), C19 displayed a better Kd (nM-μM concentrations), a fine thermodynamic profile, along with improved pharmacokinetic/pharmacodynamic property [18]. More importantly, this novel Cyp-D inhibitor showed extreme high selectivity to Cyp-D [18]. In the current study, we show that C19 was significantly more efficient than other known Cyp-D inhibitors (CsA and SfA) in protecting neuronal cells from OGDR. More importantly, we propose that Cyp-D is the primary target protein of C19. Cyp-D knockdown by targeted-shRNA similarly protected Neuro-2a cells from OGDR. Significantly, C19 was ineffective in Cyp-D-silenced Neuro-2a cells.

The neuronal death following ischemic stroke cannot be well controlled due to the lack of efficient therapeutic or neuroprotective methods. Thus, there is an urgent need to develop more effective treatments for stroke [34–36]. The results of this current study demonstrated that targeting Cyp-D by C19 efficiently protected neuronal cells from OGDR. Thus, C19 could possibly be further tested as a promising anti-ischemic stroke agent to protect neurons.

The neuroblastoma cell lines, Neuro-2a and NB41A3, were purchased from the Cell Bank of Biological Institute of Chinese Academy of Science (Shanghai, China). Cells were cultured in DMEM with 10% fetal bovine serum (FBS), plus penicillin/streptomycin (1:100, Sigma), and 4 mM L-glutamine and 0.25% HEPES (Sigma).

Primary murine neurons were prepared from CA1 hippocampus of E14-E16 embryos. CA1 neurons (200,000 cells/cm2) were plated in serum-free neuron basal medium with 2% B27 supplement and 2 mM glutamine. On day 10 of culture, the majority (> 95%) of cells were neurons.

The viability of neuronal cells was examined by the routine MTT assay (Sigma) according to the recommended protocol. MTT OD at 490 nm was recorded.

The detailed procedure of OGD/re-oxygenation (“OGDR”) was described previously [3, 5, 7, 8, 38, 39]. In brief, the neuronal cells were placed in an airtight chamber and equilibrated for 10 min with a continuous flux of gas (95% N2/5% CO2). The chamber was sealed and placed in an incubator for 6 hours OGD. Cells were then re-oxygenated for indicated time. Control cell cultures that were not deprived of oxygen and glucose, were placed in norm-oxygenated DMEM containing glucose.

The RIPA lysis buffer (purchased from Biyuntian, Wuxi, China) was applied to obtain the cellular lysate samples, which was then normalized, and boiled in SDS sample buffer. To avoid protein degradation, a mixture of proteinase inhibitors were added. The protein lysate samples (30 μg per treatment) were then separated by the 10-12% SDS-PAGE gels, and were transferred to the polyvinylidene difluoride (PVDF) membrane. The blot was then blocked with 10% milk in PBST, and labeled with indicated primary and secondary antibodies. The super-signal West Pico Enhanced Chemiluminescent (ECL) reagents (Amersham, Shanghai, China) were added to visualize the targeted protein band under X-ray film development [40–42]. Each band was quantified via the ImageJ software, and was normalized to the corresponding loading control.

The cytosol proteins of approximately one million cells per treatment were extracted in cell lysis buffer as described [22]. Twenty μg of cytosolic extracts were added to caspase assay buffer [22] with the caspase-3 substrate [22]. After 2 hours of incubation, the release of 7-amido-4-(trifluoromethyl) coumarin (AFC) was quantified, via a Fluoroskan system set [22]. The AFC OD value (at 405 nm) of treatment group was always normalized to that of control group.

The TUNEL In Situ Cell Apoptosis Detection Kit (Roche, Shanghai, China) was utilized to quantify apoptosis in neuronal cells. TUNEL-positive stained nuclei were visualized under a fluorescence microscopy (Leica DM2500). TUNEL ratio (vs. total number of cell nuclei, Hoechst-stained) was calculated, from at least 200 cells of six random views for each treatment.

For each treatment, 10 million neuronal cells were harvested and homogenized using the buffer A (250 mM sucrose, 20 mM HEPES, 10 mM KCl, 1.5 mM MgCl2, 1 mM EDTA, 1 mM EGTA, and 1 mM dithiothreitol). After centrifugation, the supernatants were collected as the cytosolic fractions. The pellets were then re-suspended in buffer B (1 mL buffer A containing 10 μL NP-40). After centrifugation, the supernatants were collected as the “mitochondrial fractions”. The pre-cleared mitochondrial lysates (500 μg per treatment) were incubated with anti-Cyp-D antibody ([8, 9]). The mitochondrial immune complexes were then captured with protein A/G-Sepharose beads (Sigma, Shanghai, China). Cyp-D-p53 association was then tested by Western blotting assay.

The 2′,7′-dichlorofluorescein diacetate (DCFH-DA) dye assay was performed to test cellular ROS intensity [48–50]. DCFH-DA freely penetrates cells, and is then hydrolysed by intracellular esterases to DCFH. Following the applied treatment, cells were stained with DCFH-DA (100 μM, Invitrogen) for 60 min. Cells were then washed with PBS for three times. DCF fluorescence signal was detected by the fluorescence microplate reader (Titertek Fluoroscan, Germany). ROS intensity in the treatment cells was always normalized to that of control cells.

Neuronal cells were cultured at 50% confluence in low-serum (2%) medium without antibiotics. The murine Cyp-D shRNA lentiviral particles (10 μL/mL medium) or the scramble control shRNA lentiviral particles (10 μL/mL medium) was added to the cultured neuronal cells for 24 hours. Afterwards, cells were cultured in puromycin (3.0 μg/mL)-containing complete medium for another 6-8 days, and the stable cells were established. Cyp-D expression in the stable cells was tested by Western blot assay and qRT-PCR assay.

The Cyp-D expression vector (with both GFP and puromycin-resistance gene) and the empty vector (“pSuper-puro-GFP”) were provided by Dr. Bi at Nanjing Medical University [53]. Lipofectamine 2000 reagent (Invitrogen, Suzhou, China) was applied to transfect Cyp-D construct (or the empty vector) to the neuronal cells. Thirty-six hours after transfection, cells were cultured in puromycin (3.0 μg/mL)-containing complete medium for another 6-8 days, and the stable cells were established. Cyp-D expression in the stable cells was tested by Western blot assay and qRT-PCR assay.

All authors listed in the current study carried out the experiments, participated in the design of the study and performed the statistical analysis, conceived of the study, and helped to draft the manuscript.

This study was supported by Scientific Research Fund of Huai’an Maternity and Child Healthcare Hospital for Basic Research. The funders had no role in study design, data collection and analysis, decision to publish, or preparation of the manuscript.

25. Clarke SJ, McStay GP, Halestrap AP. Sanglifehrin A acts as a potent inhibitor of the mitochondrial permeability transition and reperfusion injury of the heart by binding to cyclophilin-D at a different site from cyclosporin A. J Biol Chem. 2002; 277:34793-34799.