Lumbar disc disease (LDD) is a common musculoskeletal disorder, caused by degeneration of intervertebral discs of the lumbar spine and is one of the most common musculoskeletal disorders affliction in adults [1, 2]. Etiology of degenerative disc disease is complex, it has been suggested that some environmental factors, such as physical loading [3], obesity [4], smoking [5] et al. may play a role. Although various environmental have been implicated in the pathogenesis of disc degeneration, there is growing evidence that LDD has strong genetic determinants [6].

A great many genes have now been shown to be related to lumbar disc herniation, including MMP [7, 8], VDR [9], FAS [10] and COL [11] et al. It is generally believed that neuroin- flammation plays a crucial role in the development of chronic pain [12]. It has been more and more is convinced of that lumbar disc pain may be pathophysiologically induced by chemical inflammation, inflammatory cytokines are not only closely related to other cytokines and chemical mediators but also play an important role in lumbar disc herniation, although the inflammatory factors that contribute to lumbar disc herniation and pain remain to be determined [13]. Anthi Kelempisioti et al. [14] reported the associations of IL6 genes for DD among young adults in Northern Finland and indicated that IL6 is involved in the etiology of DD among young adults. Pasi J Eskola et al.[15] paper was to examine the associations between IL6 polymorphisms and LDD, the results suggest possible roles for IL6 in early DD among girls. Burke et al.[16]showed that herniated disc cells secrete large amounts of IL6 and other inflammatory mediators and cytokines that cause lumbar pain. Kang et al.[17] demonstrated that IL-6 was expressed in both normal and herniated discs, but was significantly induced in the herniated discs. Kraychete et al. [18]showed that patients with chronic low back pain due to disc herniation had high levels of TNF-α and IL-6.Thus, this study assessed single-nucleotide polymorphisms (SNPs) in the IL-4 and IL-6 with LDD risk in a Chinese Han population. It is well investigated that cytokines play a role in LDD.

Table 2: Basic information on candidate SNPs and their association with LDD risk in this study

a: calculated from two-sided chi-square tests or Fisher's exact tests for either genotype distribution. 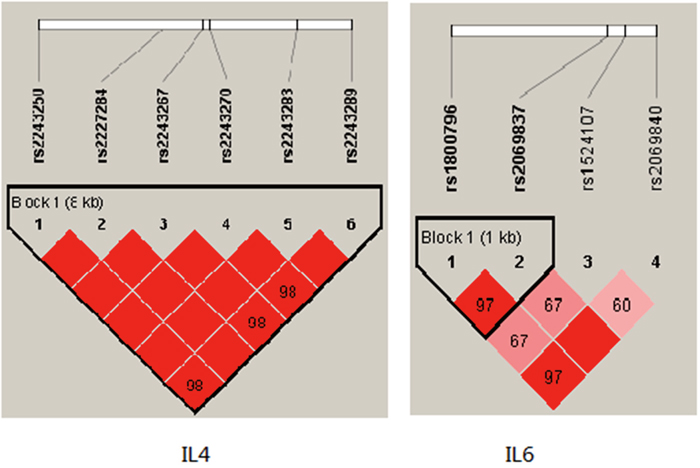 Figure 1: Haplotype block map for the IL4, IL6 SNPs genotyped in this study.

Table 4: IL6 haplotype frequencies and their associations with LDD risk

a: calculated from two-sided chi-square tests or Fisher’s exact tests for either genotype distribution.

Table 5: The association between SNPs and age, gender analysis of LDD patients

Disc degeneration is a process that begins early in life and is a result of various genetic and environmental factors and normal aging [19]. Pathophysiologically, various inflammatory factors play a role in inducing lumbar disc degeneration and nervous radical pain [20]. Although, how environmental and genetic factors modify risk of lumbar disc herniation or gene expression remain uncertain. In this study, we analyzed and associated SNPs of IL4 and IL6 with LDD risk. In summary, four variations (rs1800796, rs1524107, rs2069840, rs2243250) of the selected candidate SNPs were associated with susceptibility to LDD in our study.

IL-6 is a 184 amino acid glycoprotein, an important proinflammatory cytokine produced by activated inflammatory cells, including lymphocytes and macrophages [21]. As an important inflammatory mediator, IL6 plays an important role in rheumatoid arthritis and osteoarthritis. It is considered to be an important mediator of joint destruction and inflammation.[20]. IL6 may function by inhibiting the enzyme that affects the matrix degrading enzyme of the intervertebral disc. Matrix degrading enzyme can change of intervertebral disc matrix proteoglycan, collagen and elastin of biological macromolecules such as structure, function, level and type, weaken the protective effect of fiber ring, the nucleus protruding from the fiber ring is weak [22, 23]. Burke et al. [16]showed that herniated intervertebral disc cells were able to secrete a number of proinflammatory mediators and cytokines, including IL-6, which are accompanied by pain in the lumbar region. There are many IL6 polymorphisms that have been associated with disc degeneration, specifically rs1800797, rs1800796, rs1800795 and rs13006435 [21, 24]. In this study, we found an association of IL-6 SNPs (rs1800796, rs1524107, rs2069840) with an increased risk of developing lumbar disc herniation. Genetic variants in the IL-6 promoter region may lead to aberrant cell transcription and expression. Thereby affecting individual susceptibility to various diseases

In this study, for the first time we focused on anti-inflammatory cytokine, IL-4 in patients with LDD to examine the hypothesis that say LDD could be caused by change in immune system. Studies have shown that the IL-4 polymorphism may affect the function of monocytes, not only producing IL-4, but also producing other cytokines [25]. Remarkably, our results for the first time provided evidence that enhance our understanding of how migraine may relate to, an anti-inflammatory cytokine, IL-4 gene variation. These polymorphisms may lead to changing in IL-4 affinity to their cell targets and consequently unbalance. IL-4 appears to be a prospective target for future development of LDD preventive therapies.

The data presented here must be viewed with caution, because the number of patients is relatively small, so these results should be considered preliminary, this study did not have the ability to convert these SNPs and clinical data, such as pain level, although our data show that IL-4, IL-6 gene polymorphism may be the genetic risk factors for developing LDD in this Han Chinese population.

The results of this study have the guiding significance in clinical work in the future in the treatment of lumbar disc herniation patients, not one-sided that the symptoms of low back pain only from mechanical oppression, inflammatory cytokine stimulation is also very important, can formulate treatment plan to take full account of this, whether the operation should be integrated consider, after surgery treatment for thinking of drug use inhibition of inflammatory factor secretion, whether the long-term follow-up of patients can be detected in serum IL - 4, IL - 6 levels. Whether the author can be refined to the cell level in health examination, whether early screening protrusion of intervertebral disc, in order to achieve the purpose of prevention and treatment of secondary, these are worthy of consideration.

Genomic DNA was extracted from 2ml of whole blood which had been obtained from 961 volunteers with their informed consent. Four hundred and ninety-eight patients were recruited from the Second Affiliated Hospital of Inner Mongolia Medical University and The Hohhot First Hospital between 2015 and 2017. All participants had a magnetic resonance imaging (MRI) scan. Data regarding individual characteristics were collected by self-administered questionnaires. Primary exclusion criteria included synovial cysts, spondylolisthesis, spinal tumor, spondylosis, trauma and inflammatory disease. Individuals who had known environmental risk factors, including heavy physical loading, occupational driving, cigarette smoking or obesity (body mass index > 25 kg/m2), were also excluded. The control sample consisted of with no history of back problems and with negative MRI findings.

We have selected the ten SNPs described in this study by minor allele frequency (MAF) of > 5% in Chinese Han population and each had an r2 of > 0.80 and the SNPs located at IL4 and IL6. Whole blood were used the GoldMag-Mini Whole Blood

Yong Zhu and Shunan Li conceived and designed the paper and wrote the manuscript.

Haiyu Jia and Xuejun Yang conceived and designed the experiments, and modify the manuscript.

This work was supported by the National Natural Science Foundation of China (No. 81460332, 81360278). We are grateful to all of the patients and other individuals who made this work possible. We would also like to thank the clinicians and hospital staff who contributed to data collection for this study.