Marital status has been proved to be correlated to the survival of patients in various cancer types, except for that in the large female population of epithelial ovarian cancer (EOC). In this study, we retrospectively extracted 10905 eligible EOC patients from the Surveillance, Epidemiology, and End Results (SEER) database in the period from 2004 to 2012. We categorized marital status as married, divorced/separated, widowed, and never married. Chi-square test was used to investigate the association between marital status and other variables. The Kaplan-Meier test was adopted to compare survival curves of different groups. Multivariate Cox regression analyses were conducted to estimate the effect of marital status on overall survival (OS) and epithelial ovarian cancer-specific survival (EOCSS). To explore how marital status affected patients diagnosed at the same stage, we further performed subgroup analyses according to TNM stage. The results showed that marital status was an independent predictor for OS and EOCSS. Subgroup analyses indicated that the relationship between marital status and prognosis varied according to different conditions. Widowed patients had poorer prognosis than the other groups in most conditions, while the never married group showed similar risk of mortality as the married ones.

Epithelial ovarian cancer (EOC) is a clinically and biologically heterogeneous class of tumors including several major subtypes: serous, mucinous, endometrioid, and clear cell [1]. Although advances in diagnosis and treatment have been achieved in recent decades, age-standardized 5-year survival rate from ovarian cancer for all histological groups combined was around 30–40% in most countries from 1995 to 2009 [2]. It has become the fifth leading cause of cancer death in women in the U.S. In 2017, it is estimated that 22,440 new cases of ovarian cancer will be diagnosed and 14,080 deaths due to ovarian cancer will occur [3].

Previous studies have identified that women with a family history of ovarian cancer are at an increased risk of ovarian cancer [4]. Moreover, certain factors like the type, grade, and stage of the cancer, patients’ age and general health all affect the prognosis of EOC patients. Micro-level studies have also helped to better and more precisely predict the survival of ovarian cancer [5]. Among the studies, however, marital status, which plays an important role in women’s physical and mental health, has rarely been investigated for its effect on the EOC prognosis. In recent years, many researches have demonstrated that marital status independently predicts the survival of gastric cancer [6–8], colorectal cancer [9, 10], liver cancer [11], pancreatic cancer [12], and several other types of cancer [13–16]. Identifying the relationship between the marital status and the survival of EOC would help researchers, doctors, as well as policy makers better cope with the increasing trend of mortality rate.

Therefore, we performed a comprehensive population-based analysis to clarify the prognostic significance of marital status on the survival of EOC patients. We used data in 2004-2012 from the US Surveillance, Epidemiology and End Results (SEER) cancer registry program to investigate the association of overall survival and ovarian cancer-specific survival with marital status and further analyzed the association stratified by stage.

A total of 10905 eligible EOC patients were identified during the study period (from 2004 to 2012) in the SEER database. Among them, 5919 (54.28%) were married, 1268 (11.63%) were divorced or separated, 1733 (15.89%) were widowed, and 1985 (18.20%) were never married. Table 1 represents the summary of the subgroups of each variable and the relationship between each variable and marital status. Significant differences were observed in most of the comparisons. Specifically, widowed patients were more likely to be over 80 years (41.32%), while most of the never married patients were less than 60 years (67.41%). White patients accounted for the majority of each marital group, but the proportion of black patients was slightly higher in never married group (13.50%) than that in other groups. The distribution of marital status in diagnosis period of 2004-2008 and 2009-2012 was not statistically different (P=0.0612). Widowed patients were more likely to be diagnosed at stage IV (40.74%), while never married patients had the highest proportion among the four groups of being diagnosed at stage I. Moreover, widowed patients had the lowest proportion of receiving any type of surgery (63.24%), while the married had the highest (90.13%), compared with other groups.

Effect of marital status on overall and cancer-specific survival 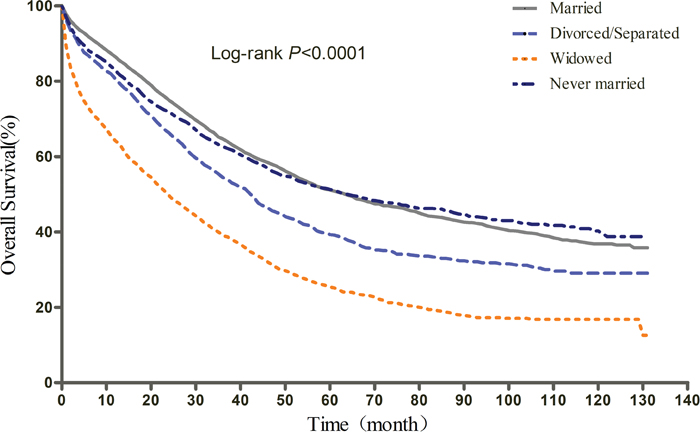 Figure 1: Kaplan-Meier curves of the effect of marital status on overall survival (OS). 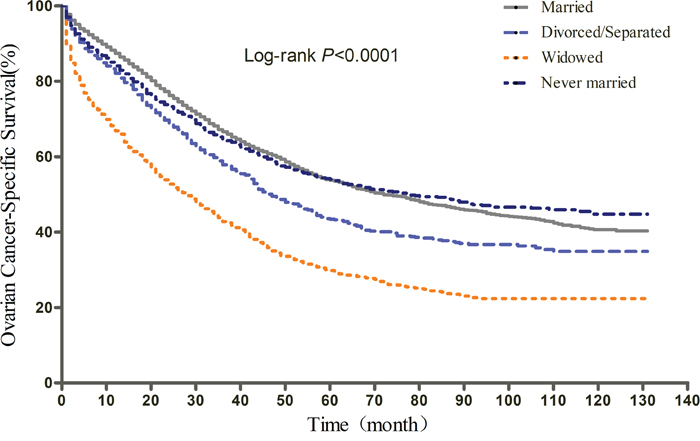 We further explored the effect of marital status on OS and EOCSS, stratified by TNM stage. The stage-specific survival curves of the OS and EOCSS of different marital status were shown in Figure 3 and Figure 4, respectively. The results of stage-stratified Cox regression were summarized in Table 4 for OS and Table 5 for EOCSS. 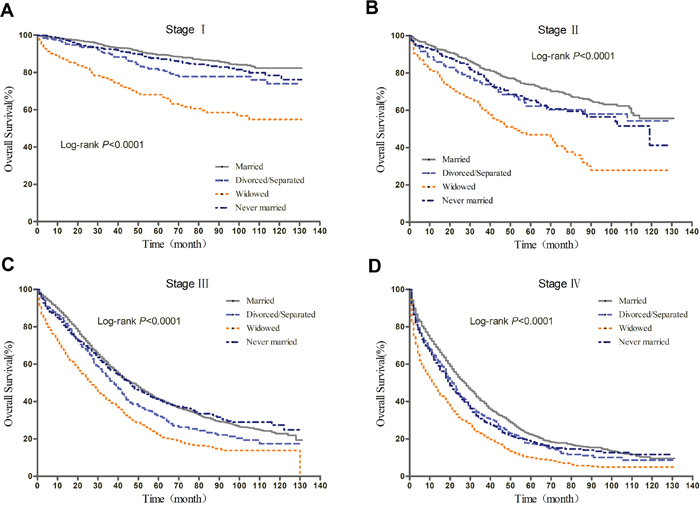 Figure 3: Kaplan-Meier curves of the effect of marital status on OS for all patients stratified by stage. 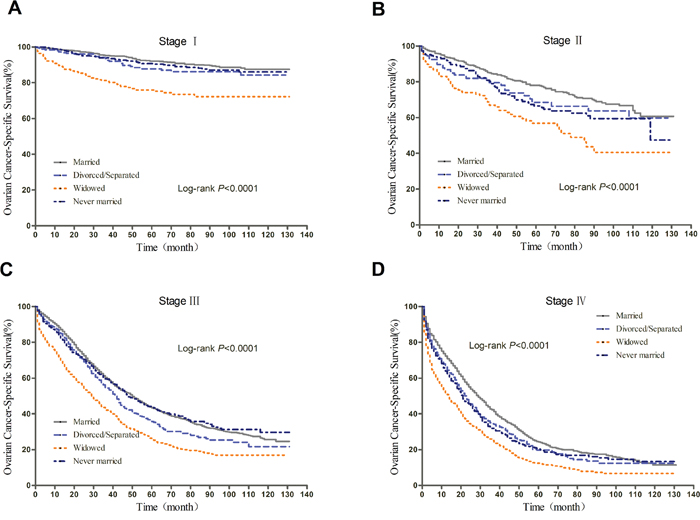 Figure 4: Kaplan-Meier curves of the effect of marital status on EOCSS for all patients stratified by stage.

We also explored the effect of marital status on OS and EOCSS, stratified by TNM, in patients who received any type of surgery. The survival curves of the OS and EOCSS of different marital status were shown in Figure 5 and Figure 6, respectively. The results were summarized in Table 6 for OS and Table 7 for EOCSS. 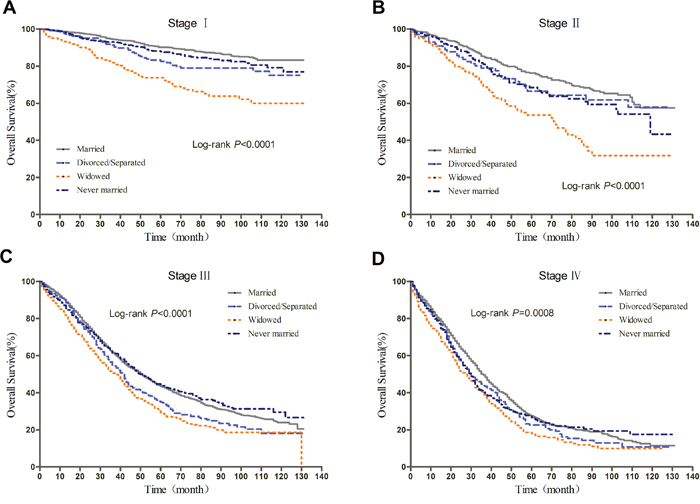 Figure 5: Kaplan-Meier curves of the effect of marital status on OS for surgical patients stratified by stage. 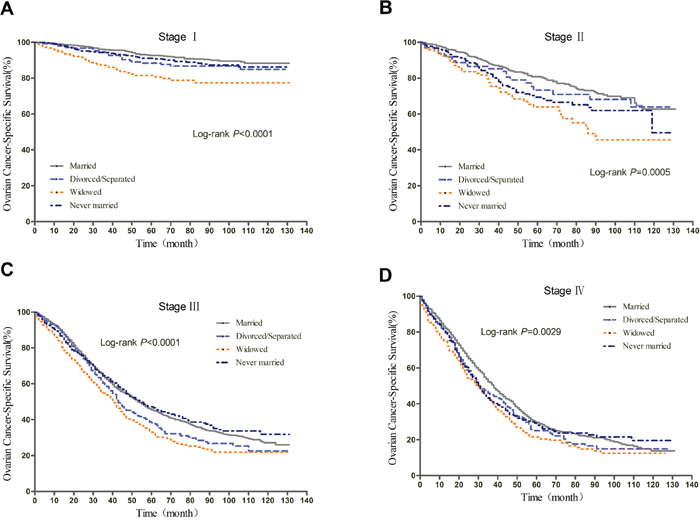 Figure 6: Kaplan-Meier curves of the effect of marital status on EOCSS for surgical patients stratified by stage.

In this study, we found that unmarried patients, including divorced/separated, widowed and never married, were at significantly greater risk of mortality after diagnosis of EOC. After adjusting for demographic factors, clinical characteristics, and treatment, complete marriage was still associated with a reduction of the risk of death. When we analyzed the effect of marital status on OS and EOCSS stratified by stage, in overall patients and patients having surgery, the effect differed according to different conditions. Moreover, the results showed that widowed patients had the highest proportion of being diagnosed at advanced stage and the lowest proportion of receiving surgical treatment.

Though most of the findings of this study are consistent with the findings of previous observational studies conducted on other types of cancer [8, 12, 17, 18], that unmarried patients had survival disadvantage compared with married patients, the significance of this study is that we analyzed the effect of marital status on the OS and EOCSS according to different stages and repeated the analyses for patients who underwent surgery, which had never been investigated for ovarian cancer before.

There are many existing explanations of the benefit of marriage for patients and they are also suitable for cancer patients. Generally, marriage, which is a main source of social support, can build up the patients’ confidence to conquer the disease, increase the patients’ adherence to the treatment plans and prescriptions of doctors [19], which can directly lead to better prognosis [20–22]. It can also lower the level of depression and anxiety [23, 24]. Female patients may suffer more from the loss of support than male patients. Therefore, policy makers and doctors should make efforts to improve the social support from every aspect for the EOC patients who are in unmarried status.

The SEER database provides us the opportunity to perform large, population-based studies. However, there are several vital limitations that should be addressed and the results of the study should be interpreted with caution. Firstly, this is an observational study and the results cannot be used to conduct causal inferences. We cannot state that the unmarried status lead to the poorer prognosis of patients, but we can conclude that the marital status is associated with, or a predictor of, the EOC prognosis. Further analyses should explore the contribution magnitude, in both direct and indirect way, of the role of marital status to the survival of EOC after diagnosis. Secondly, the limited number of accessible variables may lead to the overestimation of the effect of marital status on the cancer survival. Many other aspects can also play important roles in cancer prognosis such as comorbidity, chemotherapy, and radiotherapy. Thirdly, the follow-up period for some of the patients was so long that the marital status probably changed during the study. This is especially possible for elder patients, who were married at diagnosis but became widowed afterwards. Besides, the quality of marriage was unknown. Therefore, the classification of marriage was nominal and relatively rough.

Despite these limitations, our study indicates that unmarried EOC patients including divorced/separated, widowed, and never married, are at greater risk of overall mortality and EOC-specific mortality. When caring for the unmarried cancer patients, medical staff should be well aware of the potentially poorer prognosis in this population and health care systems should make efforts to provide social support for this population to minimize the risk of death caused by marital status.

In this study, we utilized the data obtained from SEER program, which consists of 18 registries covering approximately 28 percent of the US people and routinely collecting information of cancer patients including demographics, primary tumor site, cancer stage, treatment and the follow up information of survival. The database is an authoritative source of information on the incidence and survival of cancer in the United States and has been used by many studies to search prognostic factors associated with various cancers [25–28].

Study variables in this study included age at diagnosis, gender, year of diagnosis, race, histologic type, tumor grade, AJCC TNM stage, and surgical information. The patients were divided into four groups according to age (<60, 60-69,70-79, and ≥80). Marital status was classified as married, divorced or separated, widowed, and never married (including single, unmarried or domestic partner). Race was grouped by white, black, and others (including American Indian/Alaska native, Asian/Pacific Islanders, etc.). We divided the year of diagnosis into 2004-2008 and 2009-2012 to adjust for the survival difference caused by the advances of diagnostic techniques and therapeutic methods with the passage of time. Histologic type was classified as serous, mucinous, clear-cell, endometroid, and other epithelial types. Tumor grade I-IV represented well differentiated, moderately differentiated, poorly differentiated, and undifferentiated, respectively. Surgery was categorized as yes (received any type of surgery) and no (did not receive surgery).

The baseline characteristics of patients with different marital status were summarized and compared using chi-square test. Kaplan-Meier log-rank test was adopted to compare the difference of OS and EOCSS between subgroups of each variable. Multivariate Cox analysis was conducted to compare the OS and EOCSS of patients with different marital status after adjusting for various covariates. To explore how marital status affected patients diagnosed at the same stage, we further conducted subgroup analyses, stratified by different AJCC TNM stage, in all patients and patients who underwent surgical procedures. All P values were two-sided, and the values less than 0.05 were considered statistically significant. All analyses were performed using SAS version 9.4 (SAS Institute Inc., Cary, NC, USA). All figures were created with Graphpad Prism 5.0.

WX and LM designed the study. WX, LX, and SS analyzed and interpreted the data. WX was a major contributor in writing the manuscript and all authors read and approved the final manuscript.

The research was supported by National Natural Science Foundation of China (Grant Number 81573255).

23. Dimatteo MR, Lepper HS, Croghan TW. Depression is a risk factor for noncompliance with medical treatment: meta-analysis of the effects of anxiety and depression on patient adherence. Arch Intern Med. 2000; 160:2101-2107.