Glioma is one of the most common primary brain tumors with poor prognosis. Although radiotherapy is an important treatment method for gliomas, the efficacy is still limited by the high occurrence of radioresistance and the underlying molecular mechanism is unclear. Here, we performed a data mining work based on four glioma expression datasets. These datasets were classified into training set and validation set.Radiotherapy-induced differential expressed genes and prognosis-associated genes were screened using different classifiers. The Kaplan-Meier curves along with the two-sided Log Rank (Mantel-Cox) test were used to evaluate overall survival. We found the gene expression profiles of gliomas between those patients received radiotherapy and those patients without received radiotherapy were quite different. A 20-gene signature was identified, which was associated with radiotherapy.Furthermore, a novel 5-gene signature (HOXC10, LOC101928747, CYB561D2, RPL36A and RPS4XP2) as an independent predictor of glioma patients’ prognosis was further derived from the 20-gene signature. These findings provided a new insight into the molecular mechanism of radioresistance in gliomas. The 5-gene signature might represent therapeutic target for gliomas.

Glioma is one of the most common primary brain tumors in adults and malignant gliomas, accounting for approximately 70% of malignant primary brain tumors [1, 2]. According to the World Health Organization (WHO) classification based on four main features: nuclear atypia, mitoses, microvascular proliferation, and necrosis, gliomas are classified as: grade I (pilocytic astrocytomas, PA), grade II (low grade), grade III (anaplastic) and grade IV (glioblastoma, GBM) [3]. Recently, there have been important advances in understanding the molecular pathogenesis of malignant gliomas [4] and significant progress in its treatment [5]. However, the overall survival of gliomas remains poor. The median survival time is only 12 to 15 months for patients with GBM and 2 to 5 years for patients with anaplastic gliomas [1]. Radiotherapy with ionizing radiation (IR) is used for the treatment of low grade gliomas [6] and GBM [7]. However, its efficacy is often limited by the occurrence of radioresistance [8] and the heterogeneity of gliomas with different histological subtypes and grades [9]. Furthermore, the molecular mechanism responsible for the radioresistance of human gliomas is still unclear. Exploration of the molecular alterations after radiotherapy may provide comprehensive understanding of radioresistance in gliomas. In this study, we attempt to find a gene signature associated with radiotherapy and prognosis in gliomas. After downloading microarray data sets of gliomas from the Gene Expression Omnibus (GEO) database and TCGA database, and analyzing the differentially expressed genes (DEGs) with different classifiers between glioma samples that received radiotherapy and that did not receive radiotherapy, we successfully obtained a 20-gene signature that was associated to radiotherapy. Then we further identified a 5-gene signature from the 20-gene signature which was predictive for the prognosis of glioma patients in different data sets.

A 20-gene signature associated with radiotherapy in gliomas 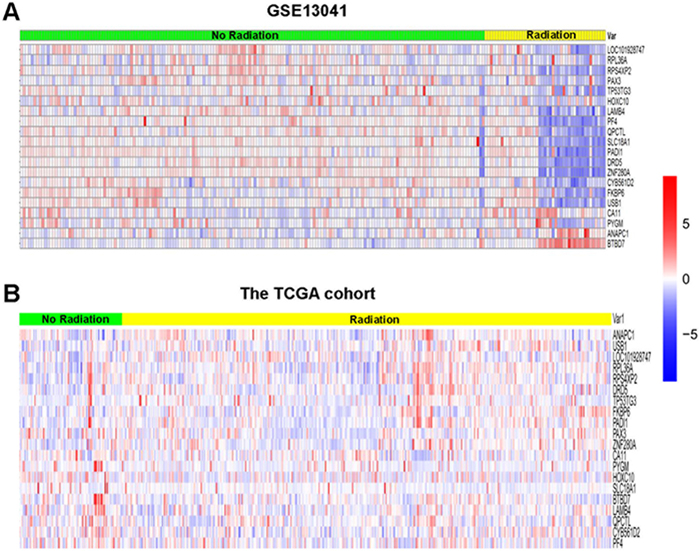 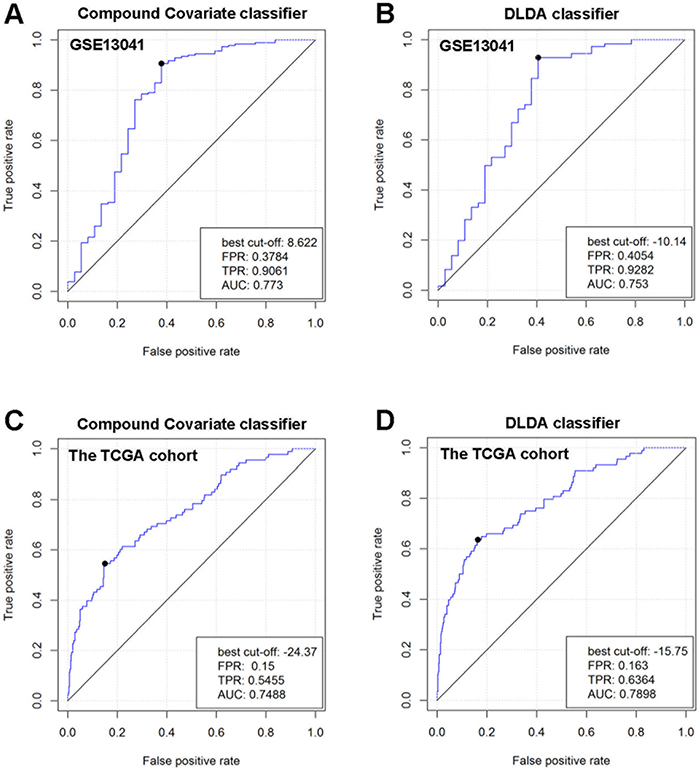 Table 2: The accuracy of the 20-gene signature in separating the radiation group from the no radiation group in different classifiers in the validation sets (GSE7696 and the TCGA cohort)

A 20-gene signature associated with radiotherapy in gliomas has been identified, suggesting that the expression changes of these genes in gliomas might be induced by radiotherapy. We further hypothesize that some of them might be associated with radioresistance in gliomas and thus could influence the prognosis of the patients. Next, we tried to screen genes which were related to the prognosis of glioma patients from the 20-gene signature. In order to achieve this goal, GSE13041 was also used as the training set while GSE7696, GSE16011 and the TCGA cohort were used as the validation sets. First, when univariable Cox proportional hazards regression analysis was used in the training set, we obtained 5 genes (HOXC10, LOC101928747, CYB561D2, RPL36A and RPS4XP2) which were highly associated with patients’ prognosis from the 20-gene signature (Table 3). The random survival forests algorithm further validated that all the 5 genes were important for survival of glioma patients when the cut value of relative importance was set as 0.1 (Figure 3 and Table 3). Then we successfully constructed a risk score model according to the expression levels of these 5 genes as follows: Risk score = 0.469×CYB561D2 + 0.197×HOXC10 - 0.066×RPS4XP2 - 0.506×RPL36A - 0.645×LOC101928747. Next, all patients in the training set and the validation sets were divided into the high-risk group and the low-risk group according to the median risk score. The distribution of risk scores and the survival status of all the patients in the 4 data sets were showed in Figure 4A, 4B. We found that the radio of alive patients over dead patients at the endpoint of follow-up in the low-risk group was significantly higher than that in the high-risk group (Likelihood ratio test, p=9.138e-05). When Kaplan-Meier curves were used to further evaluate the difference of overall survival (OS) between the two groups, we found patients in the high-risk group had significantly shorter OS than those in the low-risk group (Log Rank test, P=0.011 in GSE13041, P<0.0001 in GSE7696, GSE16011, and the TCGA cohort) (Figure 5A, 5B). These results indicated that the 5-gene signature was indeed associated with the prognosis of glioma patients. 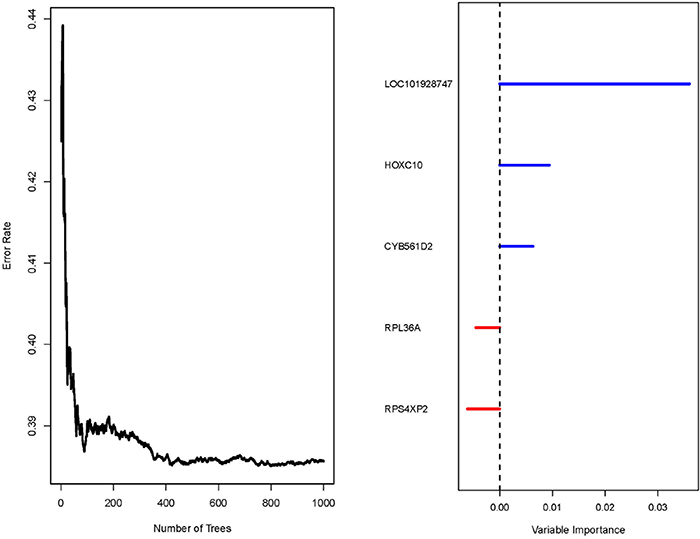 Figure 3: Result of the random survival forests algorithm in GSE13041. Left: Error rate of the function tree; Right: variable importance values for each of the 5 gene. 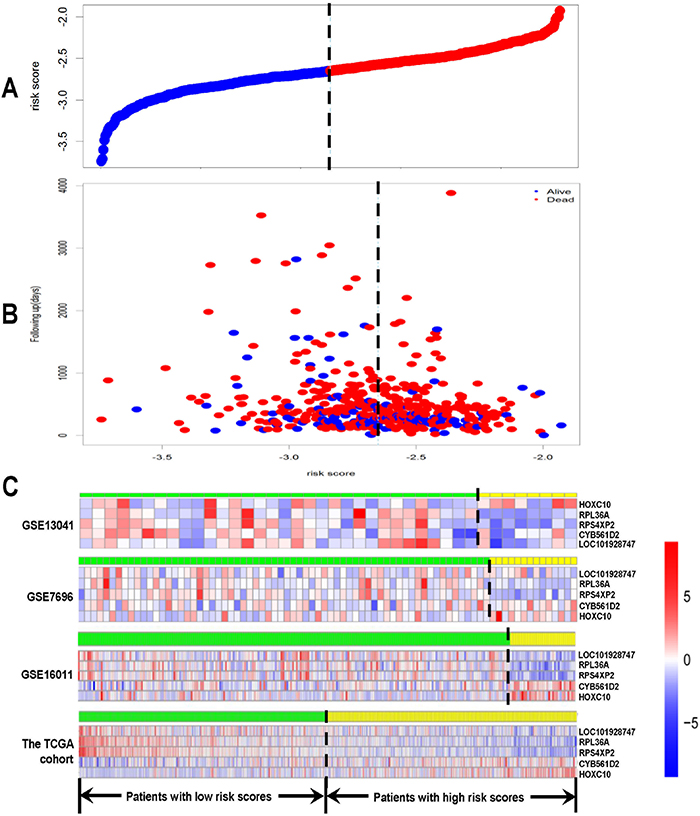 Figure 4: Risk score analysis of GSE13041, GSE7696, GSE16011 and the TCGA cohort. The distribution of risk score based on the 5-gene signature, patients’ survival status and the 5-gene expression profiles were analyzed in each of the 4 data sets. (A) Risk score distribution of all the patients in the 4 data sets; (B) patients’ survival status and time of all the patients in the 4 data sets; (C) heatmap of the 5-gene expression profiles. Rows represent genes, and columns represent patients. Red, high expression; blue, low expression, according to Z scores. The black dotted line represents the median risk score. According to the median risk score, patients were divided into lowrisk and high-risk groups. 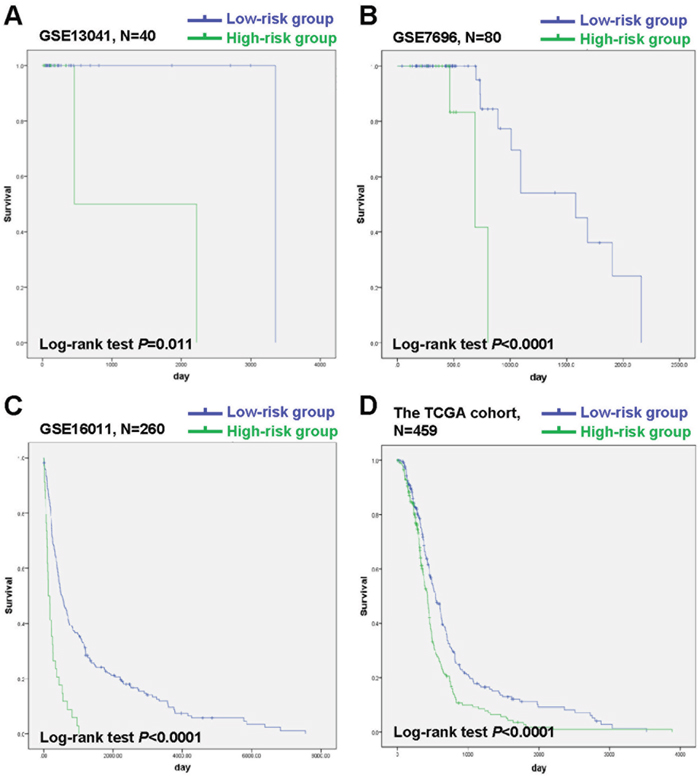 To identify the 5-gene signature associated biological pathways and processes, Gene Set Enrichment Analysis (GSEA) was performed in the GSE13041 cohort. The gene expression profile in the high-risk group and low-risk group were compared. As a result, several cancer related pathways or processes such as p53 signaling pathway and peroxisome were enriched in the high-risk group, while cancer related pathways or processes such as hedgehog signaling pathway and retinol metabolism were enriched in the low-risk group (Figure 6). 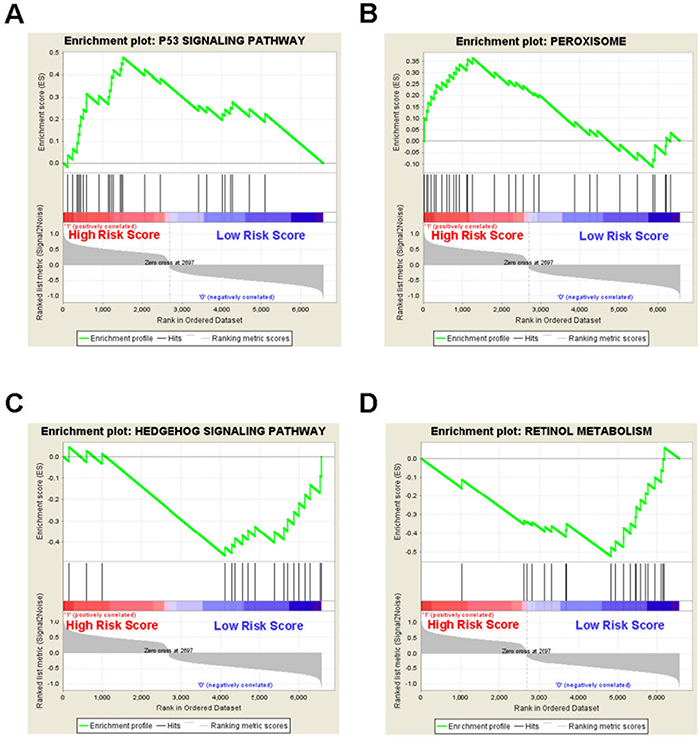 After the CEL file of each data set was downloaded, the background was corrected. The raw probe intensities were normalized with the Robust Multichip Average (RMA) [37] method and converted into standardized expression data. Then, we found 13238 common genes among the two platforms and they were used to screen markers of gliomas in subsequent analysis. For genes with more than one probe, the average probe intensity of the same gene was used to calculate its expression value. In order to avoid the systematic error between different platforms, each data set was standardized independently by transforming the expression of each gene to a mean of 0 and SD of 1. The expression profiles were pooled together and then considered them as a single data set [38].

Identification of a gene signature associated with radiotherapy

GSE13041 was defined as the training set, while GSE7696 and the TCGA cohort were defined as the validation sets. First, 5 different classifiers including Compound Covariate classifier [39], Diagonal Linear Discriminant Analysis (DLDA) classifier [40], Bayesian CCP classifier, Nearest Neighbor classifier (1-Nearest Neighbor & 1-Nearest Neighbor) [41] and Nearest Centroid classifier, were used to re-classify patients receiving radiotherapy (radiation group) and patients not receiving radiotherapy (no radiation group) for exploring specific gene markers that could efficiently separate radiation group from the no radiation group. Among the 5 classifiers, Compound Covariate classifier and DLDA are linear classifiers. During this process, “leave one out cross validation” was used to increase the accuracy and stability of the results. With this method, a total of 20 genes with classification error rate less than 0.16 were identified as genes that were associated with radiotherapy in gliomas in the training set. Then, the accuracy, sensitivity, specificity, positive predictive value (PPV) and negative predictive value (NPV) of the 20-gene signature in separating the radiation group from the no radiation group in different classifiers were calculated. The hierarchical clustering analysis [42] was performed to visually evaluate the expression of the 20-gene signature between these two groups. Hierarchical clustering analysis of gene expression profiles was done based on centered correlation metric and average linkage method. Also, to evaluate the comprehensive ability to separate these two groups, the receiver operating characteristic (ROC) curves were graphed and area under the curve (AUC) was calculated in these two linear classifiers. Next, two validation sets were used to validate the results in the training set. Moreover, the ability of the 20-gene signature in separating these two groups was evaluated by calculating the accuracy in different classifiers, hierarchical clustering analysis and ROC curves.

Identification of a gene signature associated with prognosis of glioma patients

A total of 4 datasets were divided into the training set (GSE13041) and validation sets (GSE7696, GSE16011, and the TCGA cohort). The training set was used to detect a gene signature associated with prognosis of glioma patients, and the validation sets were used to verify the reliability of this gene signature. In the training set, univariable Cox proportional hazards regression analysis [43] was used. When random permutation test was used and genes with P values less than 0.001 were selected, we obtained a 5-gene signature from the above 20-gene signature. Then, the random survival forests algorithm [44–46] was performed to evaluate the relative importance of each gene to further screen genes associated with the survival of the patients from the 5-gene signature. In this process, number of trees (N tree) was set as 1000, and genes with relative importance more than 0.1 were selected. In fact, the 5 genes were all confirmed to have relative importance more than 0.1. Thus, all the 5 genes were included for subsequent analysis. Then, a risk score model as described previously [46] was constructed using a multivariable Cox regression model based on the 5-gene signature. Risk score of each patient in the training and validation sets was calculated. Patients in the training set and the validation sets were divided into highrisk and low-risk groups using the median risk score as the cut-off. Then the Kaplan-Meier curves were used to further evaluate the difference of overall survival between the two groups, and the hierarchical clustering analysis was performed to visually evaluate the expression of the 5-gene signature between these two groups. Differences in survival time between the low-risk and high-risk groups in each data set were then compared using the two-sided Log Rank (Mantel-Cox) test. Finally, the risk score, together with other clinicopathological parameters were analyzed in univariate and multivariable Cox regression model to verify whether the risk score based on the 5-gene signature is an independent predictor of glioma patients’ prognosis in the training set and the validation sets.

The data mining was performed with R software, while other statistical analysis was performed by SPSS (version 17.0). The ROC curves were used to evaluate the ability of the gene signature to separate the radiotherapy group from the no radiotherapy group and AUC of each curve was calculated. The Kaplan-Meier curves were used to evaluate overall survival of the high-risk group and the low-risk group, along with the two-sided Log Rank (Mantel-Cox) test to determine if the difference between the two groups was significant. Other statistical methods included the Cox proportional hazard models, univariate and multivariable Cox regression model. In this study, all statistical tests were two-tailed and differences were considered statistically significant if P-values<0.05.