Objective: The purpose of this study was to evaluate CTV-PTV margins of tumors for tomotherapy.

Conclusions: The CTV-PTV margins for patients with different types of tumors were heterogeneous during tomotherapy. The individual margins of six directions should be given for those patients who accept tomotherapy.

In addition, tomotherapy with its high-dose gradients has advantages in treating complex-shaped tumors [3]. A previous study showed that helical tomotherapy can reduce the dose to the rectum during prostatic tumors treatment [4]. Another study also indicated that the helical tomotherapy treatment could achieve a lower dose to the adjacent tissues compared with IMRT in breast cancers, and the V95 could increase by 21% [5]. Tomotherapy had become the preferred radiation therapy approach for craniospinal irradiation (CSI), as previous studies have demonstrated that tomotherapy can achieve high conformity, excellent dose homogeneity, and healthy tissues paring in CSI [6, 7].

Since irreversible dose deviation would be brought due to uncertainty resulting from the tumors’ target and actual radiative treatment process, tomotherapy cannot accept any errors that could affect radiation dose delivery. Thus, the precise target position and contour is extremely important in tomotherapy.

IGRT can monitor whether tumors receive adequate radiotherapy exposure, which is one of the critical points in tomotherapy. Megavoltage CT (MVCT) is a unique imaging method used in tomotherapy. Despite the low contrast-to-noise ratio, it has similar uniformity and spatial resolutions as diagnostic CT images [8]. In addition, MVCT images can not only verify the position of the patients, they can also delineate the anatomy of the patients to a certain extent [2, 9]. Using MVCT images, the setup errors can be calculated by rigid registering the MVCT images to the CT images. Subsequently, the appropriate margins from clinical target volume (CTV) to planning target volume (PTV) can be obtained for optimal treatment.

According to ICRU Report 62 and 83, the PTV should generally be given priority over CTV by analyzing setup errors to ensure the PTV receives an adequate irradiation dose [10, 11]. In addition, CTV-PTV margins should be large enough to prevent geographical misses of tumors without compromising the effects of the treatment [12]. Since the principle and equipment of tomotherapy is significantly different from the general linear accelerator, it is necessary for tomotherapy to set a specific standard based on its characteristics.

The distributions of setup errors 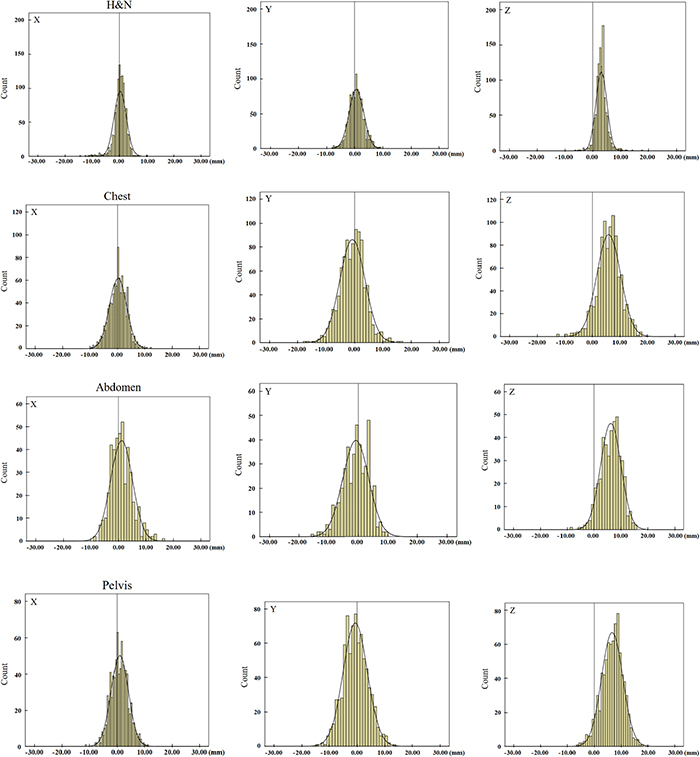 Table 1: The 95% distribution range of setup errors in all tumors (mm)

The setup errors of different tumors 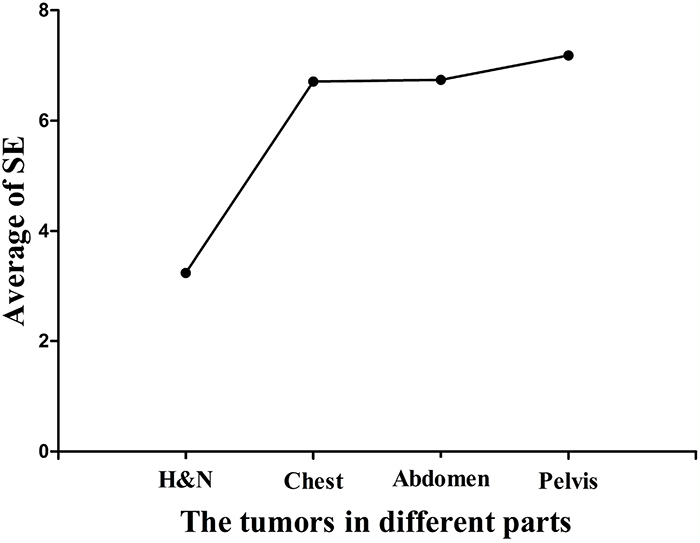 The margins for CTV to PTV

Large differences in margins were observed along the ventral-dorsal directions, and the CTV-PTV margins along the-Z direction were 1.1, 1.6, 2.0, and 2.3 times more than that along the +Z direction in the head and neck tumors, thoracic tumors, abdominal tumors, and pelvic tumors, respectively.

The CTV-PTV margins of different tumors showed heterogeneity when patients underwent helical tomotherapy. The heterogeneity was more significantly different along the Z axis, which meant that using previous methods to calculate CTV-PTV margins along the three directions could result in uncertainties. These uncertainties may increase the risk of target missing and the radiation exposure of OARs.

Note that these results were consistent to previously published articles; for instance, Schubert et al showed that the distributions for brain, head, and neck treatments were narrow and sharp compared to lung and prostate tumors, and they also showed that the systematic errors and random errors were smaller in all translational directions for brain, head, and neck treatments [19]. One possible explanation for the setup differences between the various treatment sites could be the use of different immobilization methods. The thermoplastic head masks were used for head and neck immobilization, which could limit the movements of patients effectively, thus, result in fewer setup errors. On the other hand, the setup errors of the thoracic tumors, abdominal tumors, and pelvic tumors were larger, which may be due to respiration, immobilization approaches used, and couch sag.

Previous studies demonstrated that the largest systematic errors (Ʃ) were found along the Z axis in head and neck tumors, prostate tumors, and other tumors [20-22]. Our results were consistent with previous findings, showing that the largest systematic errors (Ʃ) were in the +Z direction. In addition, these results may be associated with the effects of couch sag by analyzing the setup errors of all tumor cases. Since the patients were positioned to the setup lasers outside the bore, and treatment was conducted inside the bore, the positioning may not take the absolute tomotherapy couch sag into account [19]. Since the couch lacks the support from the tabletop, it could increase the setup errors along the +Z direction. The average of setup errors for the head and neck tumors, thoracic tumors, abdominal tumors, and pelvic tumors along the +Z direction reached 3.24 mm, 6.71 mm, 6.74 mm, and 7.18 mm, respectively (Figure 2).

These results showed that the setup errors were increased with the shift of treatment sites from the head and neck to pelvis, which might be associated with the distance from the tabletop which may result in a lower center of gravity. Thus, the CTV-PTV margins among Z axes would increase with the couch sag.

The reduction of couch sag influences and solving the heterogeneity of setup errors are issues that need to be resolved. One possible solution could be adjusting the couch sag when the patients undergo tomotherapy for the first time. However, the shortcoming of this method can be intra-subject changes over time, such as patients’ possible changing weight. Another possible solution could be adjusting the couch sag before patients undergo tomotherapy treatment every time. However, the efficiency of the treatment could be compromised because of the time spent. Future studies may formulate the optimal methods in calculating the CTV-PTV margins before patients accepted tomotherapy. Such optimal methods could reduce the time spent in modifying and verifying the treatment plan caused by inadequate estimation of setup errors.

In this study, the CTV-PTV margins were calculated according to van Herk’s formula, which can derive a margin with an accuracy of 90% such that the patients receive a minimum cumulative CTV dose of at least 95% of the prescribed dose [18]. The dose gradients of tomotherapy were clearer between tumors and surrounding normal structure, and were more sensitive to the size of CTV-PTV margins. There could be a dose loss in the target or a dose increase in organs at risks if the margins were not appropriate. 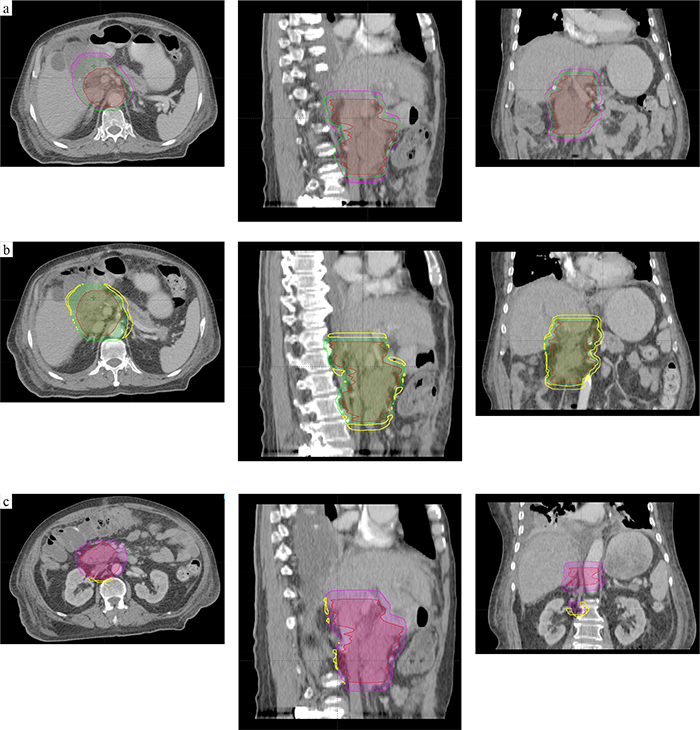 This study suggests expanding the heterogeneous CTV-PTV margins when patients undergo tomotherapy treatment. Our results demonstrated that the safety of radiotherapy could be improved without MVCT scans by using these CTV-PTV margins. In addition, the potential insufficient irradiation of tumors or the potential excessive exposure of an OAR caused by inadequate or excessive CTV-PTV margins could be avoided. However, dose metric superiority was not conducted in this study. In addition, other factors that affect setup errors and CTV-PTV margins were not considered, such as the external fiducial type and placement location, the positioning laser accuracy, as well as the tumor delineation uncertainty of the CTV [10, 19].

This study thought that the CTV-PTV margins for patients with different types of tumors had heterogeneity during tomotherapy. Future studies should formulate the optimal methods in calculating the CTV-PTV margins before patients accepted tomotherapy using information along the left, right, head, foot, ventral, and dorsal directions. Such optimal methods could reduce the time spent in modifying and verifying the treatment plan caused by inadequate estimation of setup errors.

MVCT images were registered to simulation CT images. A radiation therapist subsequently checked the settings before each treatment. Image registration was based on bony anatomy for some tumors in bony structures such as head and neck tumors, while image registration was based on bony and soft tissue anatomy for the tumors in soft tissue such as breast tumors. Image registration was first performed using an automatic process and followed by manually checking. Adjustments were applied if necessary before treatment. Positioning corrections were applied by couch shifts in X (left-right), Y (head-foot) and Z (ventral-dorsal) axes. In addition, the setup errors on these directions were recorded.

Systematic errors (Ʃ) and random errors(σ) of different tumor cases along the six directions were analyzed. The systematic errors (Ʃ) were computed by taking the standard deviation of the mean of displacements in each individual patient over a population in different tumor cases, which was stochastic in nature for a group of patients. For instance, one patient error might be due to postoperative edema and another might be due to wrong positioning before treatment. The random errors (σ) were defined as the root mean square of the random error distribution, which were computed from the standard deviations of individual patients over a population in different tumor cases. Random deviation occurred due to day-to-day variations in patient setup. Lastly, the CTV-PTV margins of different tumor cases were calculated by van Herk’s formula: M = 2.5 Σ+0.7 σ [18].

YY planned this retrospective study. TY was responsible for data collection and statistical analysis, and drafted the manuscript. CJH was involved in the data collection. GGZ, LTH, LJ, and CPJ reviewed and commented on the results of the study. All authors read and approved the final manuscript.