Marital status is associated with superior survival in patients with esophageal cancer: a Surveillance, Epidemiology, and End Results study

Esophageal cancer is an aggressive gastrointestinal cancer [1, 2]. In the U.S., the majority of the patients present beyond early stage with a low 5-year survival of 20% [3, 4]. Furthermore, the incidence of esophageal cancer has been increasing in the U.S. due to a rise in esophageal adenocarincoma associated with obesity [5].

Married status as a surrogate marker for social support has conferred health and survival benefits across general populations as well as among patients with cancer [6, 7]. The survival benefit has been demonstrated specifically among patients with gastric, colorectal, pancreatic, ovarian, and head and neck cancers [8-12]. In a U.S. National Cancer Institute’s Surveillance, Epidemiology, and End Results (SEER) cancer registry study, married patients were less likely to present with metastatic disease, more likely to receive definite therapy, and had a lower risk of cancer-specific mortality among patients with common cancers [13]. The protective effect of marriage was extended to patients with esophageal cancer. However, a previous population-based study from Sweden population showed no survival benefit of married patients among those who received surgery for esophageal cancer [14]. 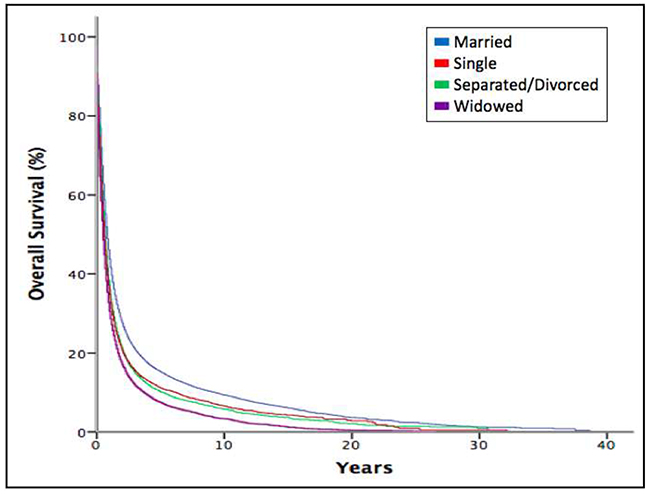 Figure 1: Kaplan-Meier estimates for overall survival according to marital status. 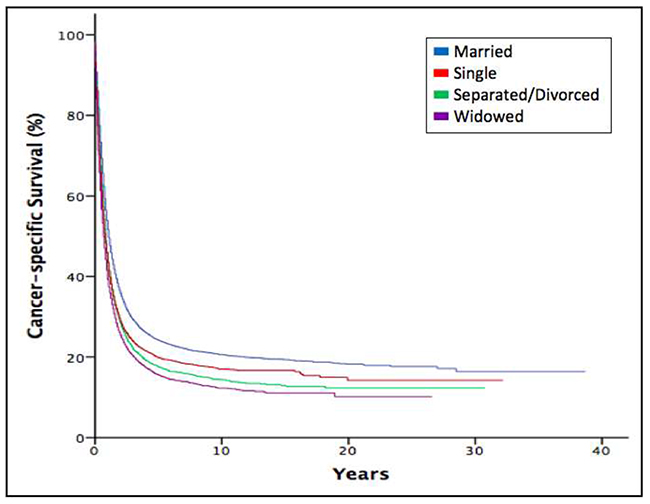 Figure 2: Kaplan-Meier estimates for cancer-specific survival according to marital status.

Subgroup analyses for evaluating impact of marital status on survival

In a large population-based U.S. study of patients with esophageal cancer, married patients demonstrated superior overall and cancer-specific survival compared to those that were not married. Furthermore, among those who were not married, widowed patients had the highest risk of death followed by divorced or separated, single, and married patients after adjusting for confounding factors. Finally, male gender, older age, black race/ethnicity, squamous cell carcinoma histology, overlapping tumor locations, receiving no cancer-directed therapy, and lower income were also associated with worse survival.

Our findings are consistent with a recent U.S. study that demonstrated the protective effect of marriage among patients with cancer including those with esophageal cancer [13]. However our results are different from prior Swedish studies that demonstrated no survival benefit among patients with esophageal cancer undergoing surgery [14]. A possible reason for the inconsistent findings may be related to the difference in the study design that selected for patients who were candidates for surgery in the Swedish study. For example, a higher proportion of patients in our study had squamous cell carcinoma (29,334/69,139 (48%) vs. 149/606 (25%); difference=18%, 95%CI 14%-21%) and metastatic disease (21,573/69,139 (31%) vs. 69/606 (11%); difference=20%, 95%CI 17-22%) compared to the Swedish cohort undergoing surgery. Only 19,823 (29%) patients in our study received esophageal cancer surgery.

Physical, psychological, and sociological reasons have been proposed to explain the existence of health inequality between married and unmarried patients with cancer [15]. Sicker patients including those with advanced cancer are less likely to marry and have a higher risk of dissolution of marriage [16]. Furthermore, marriage as a surrogate indicator for social support promotes healthy lifestyle decisions and utilization of healthcare resources that may lead to early detection of cancer [17-21]. However, given that the survival benefit of married patients was observed in all cancer stages including those with metastatic disease in our study, the impact of marriage appears to extend beyond the benefit of early diagnosis. For example, our study demonstrated that married patients were more likely to receive cancer-specific therapy compared to those who were not married (74% vs. 66%, difference=8%, 95%CI 7-9%). Other studies have demonstrated higher adherence with prescribed therapy in married patients with chronic disease compared to unmarried patients which may impact outcome [22].

Our study has limitations. SEER database lacked detailed individual patient information, such as financial status, medical comorbidities (i.e. mood disorders), and other forms of family support structure (e.g. children), which may potentially confound the outcome analysis. In addition, as the data on marital status was collected at the time of diagnosis, potential change in marital status as a result of esophageal cancer diagnosis was not assessed.

Data was obtained from the SEER program of the National Cancer Institute, which collects and publishes cancer incidence, treatment, and survival data from cancer registries covering approximately 28% of the U.S. population [3]. Morphology codes of C15.0-C15.9 and D00.1 were used to identify patient diagnosed with esophageal cancer between 1973 and 2013. Only histological codes according to ICD-O-3 for adenocarcinoma (code: 8140-8145, 8147, 8150, 8210-8211, 8255-8323, 8480-8490, 8560-8576) and squamous cell carcinoma (code: 8052-8078, 8083-8084, 8094) of the esophagus were included in the analysis. Patients were excluded if age at diagnosis was less than 18 years, had incomplete data of marital status, or the cause or time of death was unknown. Other factors including gender, race/ethnicity, marital status, histology, tumor location, SEER stages, cancer-specific therapy, household income, and insurance status were extracted from the database.

The primary endpoints were overall survival and cancer-specific survival of patients with esophageal cancer. Marital status was categorized as either married or not married at the time of diagnosis. Those that were not married were further categorized as single, separated or divorced, and widowed for the outcome analysis. Patients who reported to cohabitate with an unmarried, domestic partner (same gender, opposite gender, or unregistered) were excluded from the outcome analysis given the very low number (0.05%) of patients. Cancer stage at presentation was classified as in situ, localized, regional, or distant according to American Joint Committee on Cancer staging reported by SEER. Household income was derived from the patient’s county median household income and stratified into quintiles for analysis. Insurance status was defined by patients who had commercial or Medicare insurance. We obtained permission to access the research data files with the reference number 13113-Nov2015. The study was approved by the review board of Sir Run Run Shaw Hospital, School of Medicine, Zhejiang University.

SEER*Stat software (Version 8.2.1) was used to identify patients who met the inclusion criteria. Continuous variables were expressed as mean and standard deviations (SD) or median with IQR. Categorical values were expressed as frequency (percentages) with 95% CI. The associations between marital status and clinical characteristics were analyzed using the chi-square test or student t-test. Factors associated with survival outcomes were evaluated by Kaplan-Meier analysis and Cox regression models. Insurance status as a factor was evaluated only as a subgroup analysis given that the data was not available in the SEER database prior to the year 2007. For the survival analysis with overall survival as an outcome variable, deaths of any cause were treated as events while patients who were alive at last follow-up were censored. For the cancer specific survival analysis, deaths attributed to esophageal cancer were treated as events, while other causes of deaths other than esophageal cancer or survivors were censored. All analyses were performed with SPSS (Version 22.0). A two-sided P<0.05 was considered statistical significance.

Guarantor of the article: Ning Dai.