Target genome editing is introducing the expected DNA changes into the specific site of the genome, producing cells lacking of a fragment of DNA sequence (knock-out), harboring extra DNA fragment (knock-in) or minimal DNA sequence alterations (target mutation/correction) [1–4]. This technology not only plays an important role in basic biology research for gene function studies but also holds a big promise for potential clinical applications in gene and cell therapy [1–4].

Taking the advantages of DNA repair process, engineered nucleases, such as ZFN (Zinc Finger Nucleases) and Talen (Transcription Activator-Like Effector Nucleases), induce double strand break or single strand nick to the specific site of the genomic DNA [5]. The DNA lesion would be repaired by homologous recombination (HR) in the presence of extra homologous DNA fragment or non-homologous end joining (NHEJ) which introduces small deletions, insertions or nucleotide alterations into the DNA [5]. Differing from ZFN and Talen, both of which are based on protein-DNA recognization, the new generation of engineered nuclease, RGEN (RNA Guided EndoNuclease) is based on base pairing between the gRNA (guide RNA) and target DNA [5]. It is much easier to construct, modify and attracts more attentions [1, 6, 7].

Comparing with the original functional structure of guide RNA, which is composed of crRNA and tracrRNA, the widely used chimeric gRNA (pgRNA-JKJ) has shorter crRNA and tracrRNA sequence (Figure 1A, 1B). Furthermore, the deleted RNA sequence could form extra loop structure (Figure 1B), which might enhance the stability of the guide RNA structure and subsequently the genome editing efficiency. Thus the genome editing efficiency of five different forms of guide RNA was tested, including the widely used chimeric form (pgRNA-JKJ, Figure 1B), the native form reported before [10] (pgRNA-BDR, Figure 1C) and another three forms modified in the current study. Plasmid pgRNA-BSH was constructed by expressing the full length of original crRNA and tracrRNA individually (Figure 1D). Plasmid pgRNA-BL was constructed by expressing the full length of original crRNA and tracrRNA together directly (Figure 1E). Plasmid pgRNA-CL was constructed by replacing the unpaired part of tracrRNA of pgRNA-BL, which could not form base pairing with crRNA, with chimeric linker used for pgRNA-JKJ construction (Figure 1B, 1F). 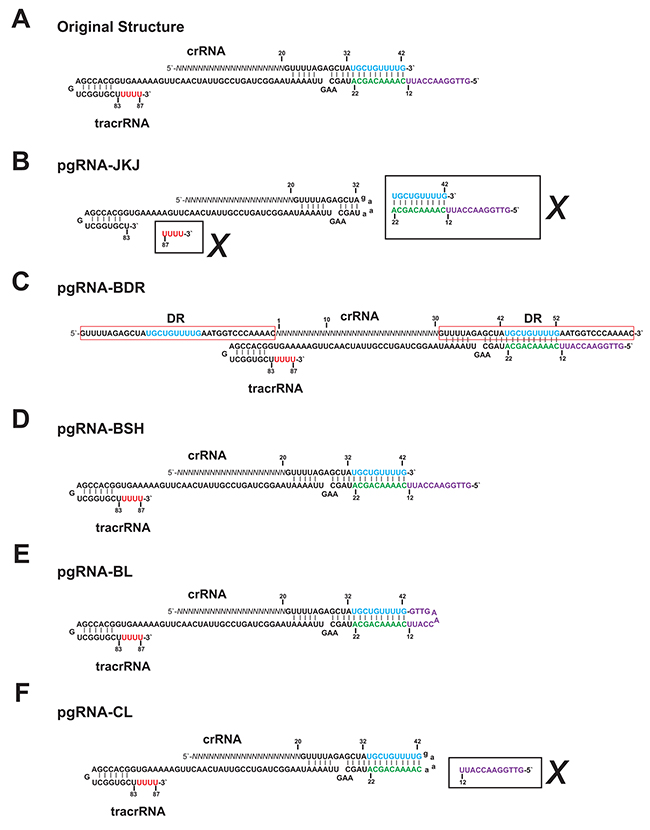 Three different guide RNAs for human gene Desmin and four for human gene LAMP2, which are mutated genes in the hereditary cardiomyopathy [13, 14], were designed with web-based software ZiFiT Targeter. Corresponding modifications were made to adapt to guide RNA construction procedure (Supplementary Table 1).

A GFP reporter plasmid was applied to measure the genome editing efficiency of different forms of guide RNA. Data showed that the pgRNA-BL was the most efficient form among all five forms of gRNA tested in three sites of human gene Desmin, assessed in HEK293T cells (Figure 2A). As the GFP reporter (containing two 500bp length of overlapping GFP sequence and separated with the gRNA recognization sites) assay mostly measures the frequency of the homologous recombination, the NHEJ frequency was also evaluated. Two gRNA recognization sites of human gene Desmin were flanked by restriction enzyme sites (BsaI for gRNA site 1 and XmaI for gRNA site 2, Figure 2B). Once the NHEJ occurs, the restriction enzyme recognization sites would be eliminated in some DNA molecules and therefore could not be cut by the corresponding restriction enzymes. In accordance with the GFP reporter results, the pgRNA-BL was the most efficient form (Figure 2C, 2D). And this was further confirmed in the human gene LAMP2 (Supplementary Figure 1). 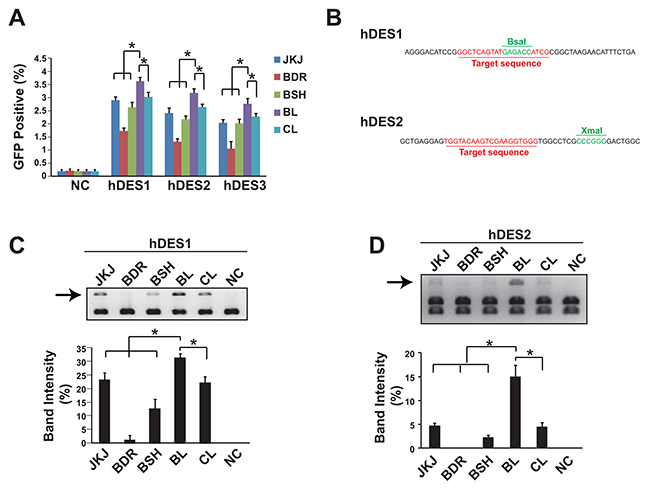 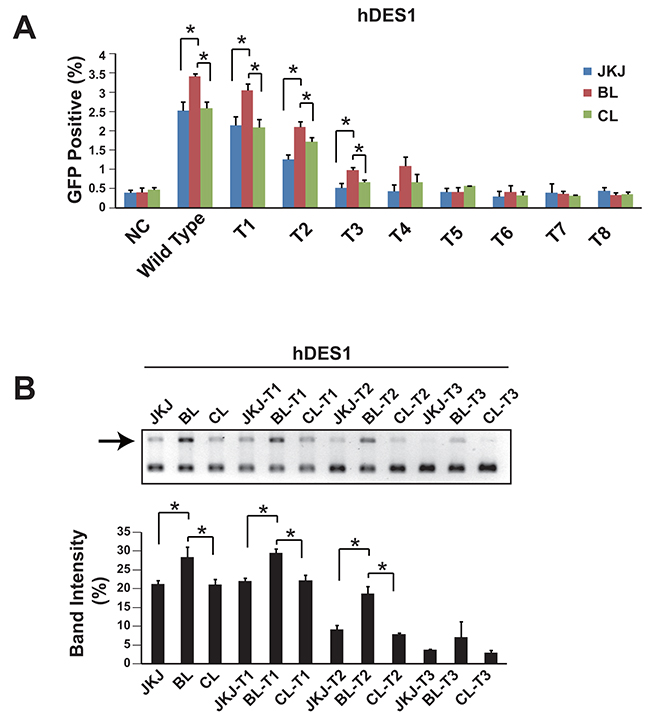 Thus, both the GFP reporter and NHEJ assays clearly indicated that the guide RNA structure of pgRNA-BL is much more effective than other structures we tested, including the widely used chimeric structure pgRNA-JKJ.

The new generation of genome editing tool, RGEN, has paved a new way to manipulate the genome [1, 2]. The mechanism is similar to ZFN and Talen. All of them are based on two modules. One is used for binding to the target DNA sequence and other one for DNA cutting with endonuclease activity. The simple base pairing between the guided RNA of RGEN and the target DNA sequence confers an advantage over protein based DNA sequence recognization of ZFN and Talen. Comparing to the strategy of improving of the specificity of ZFN and Talen, the short and simple gRNA sequence (20bp for DNA pairing, 12-22bp for crRNA and 87bp for tracrRNA) is much easier to manipulate. The RGEN is a promising tool for high throughput genome manipulation, although more effects should be made to improve the efficiency and specificity [1, 4].

The secondary structure of gRNA is crucial for Cas9 recognization and binding. And the base pairing between the crRNA and tracrRNA or inside of the crRNA/ tracrRNA is the basis of the gRNA secondary structure formation. The 20bp length of target DNA recognization sequence located in the 5 prime of the crRNA varies depending on the DNA region targeted. Thus the GC content or complexity of the 20bp sequence might affect the stability of the gRNA structure, as they also have the potential to form base pairing with the crRNA/ tracrRNA. The optimized structure of pgRNA-BL with extended crRNA and tracrRNA sequences would have more stabilized structure of crRNA and tracrRNA, therefore reducing the interfering effects of the 20bp sequence in the 5 prime of crRNA. Thus, the more gRNA with correct secondary structure, the more efficient genome editing occurs.

Therefore our data here uncovered the new type of gRNA structure with high genome editing efficiency. However, more efforts should be made to further enhance the efficiency and specificity. Furthermore, the mechanism of the secondary gRNA structure formation and maintenance needs more studies in detail.

The authors declare no commercial or financial conflicts of interest.