Flaps are commonly used to remedy cosmetic defects, restore function after traffic accidents and other traumas, and in the aged. Aydin and Liang W used pedicled, nasolabial island flaps to rebuild the nose after removal of nose-tip basal cell carcinomas [1, 2]. Free flap reconstruction has also been employed to treat breast cancer patients [3]. Morris used a perforator flap to repair a large defect on the back [4]. Random skin flaps that are similar to the wound in texture, color, and dermatoglyphic properties are often employed to repair small soft-tissue defects evident after tumor resection. An adequate blood supply is essential for flap survival; the possibility of necrosis (especially complete necrosis) must be considered when designing and placing flaps [5]. Many agents have been reported to improve flap survival by inhibiting inflammation, increasing free-radical scavenging, promoting angiogenesis, and/or expanding the microvascular network. Such materials include VEGF [6], sildenafil [7], bezafibrate [8], aspirin [9], and some traditional Chinese medicines [10, 11].

Naringin (4’, 5, 7-trihydroxy flavanone-7-rhamnoglucoside) is a flavanone glycoside of grapefruit and other citrus fruits that exhibits many pharmacological activities [12, 13]. Naringin inhibits both oxidative stress [14] and the inflammatory response [15] and reduces apoptosis [16]. Naringin is both neuroprotective [17] and hepatoprotective [18], and it promoted fracture healing in osteoporotic rats [19]. The etiopathogeneses of lung injuries and pulmonary fibrosis feature expression of TNF-α and transforming growth factor-β (TGF-β) [20]. Naringin may stimulate angiogenesis by activating VEGF expression [12, 19, 21]. However, to the best of our knowledge, no study has explored whether naringin improves the survival of random skin flaps. We explore this possibility in the present study.

General observations and survival of flaps

Every flap was monitored by the same experimenter from day 1 to 7 postoperatively and the conditions (flap color, elasticity and necrosis) were recorded. On postoperative day 7, all groups showed well-demarcated borders between the surviving and necrotic parts; the necrotic areas presented dark, hard, and did not bleed when cut, while the surviving areas presented rosy, soft, and bled when cut (Figure 1). 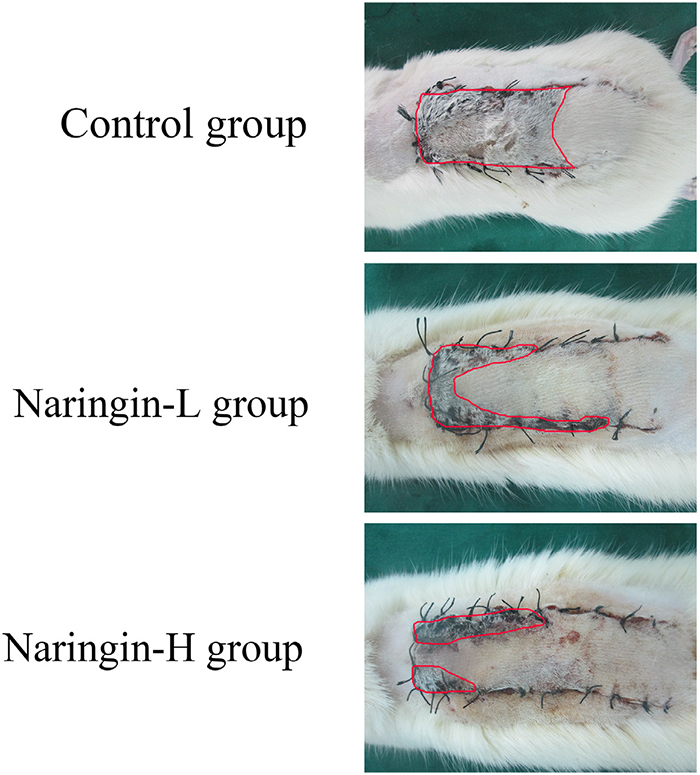 Figure 1: Digital photographs of flaps from the three groups and the necrosis parts were outlined by red line.

In order to evaluate the effects of naringin on the thickness of granulation tissue, tissue edema and infiltration of neutrophil cells, flap sections were prepared for HE staining. As demonstrated in Figure 3A, on day 7, the distal areas were morphologically similar in histological terms. All flaps exhibited similar changes in appearance; inflammatory cells infiltration was prominent, as were structural damage and edema. Ninety percent of tissue images revealed degeneration and necrosis of muscle fibers. Area II of the control group showed that many inflammatory cells were detected, while less in the treatment group, especially in the high-dose group, indicating that the inflammatory reaction was less severe in the treated flaps. Besides, the microvascular density (MVD) of area II was 33.38±2.90, 30.44±1.23, 14.04±2.66/mm2 in the Naringin-H groups, Naringin-L groups and control groups, respectively (Figure 3B; **p < 0.01 vs. the control group). In area I, the Naringin group exhibited edema, vascular dilation and inflammatory cells infiltration to a lesser extent than controls. 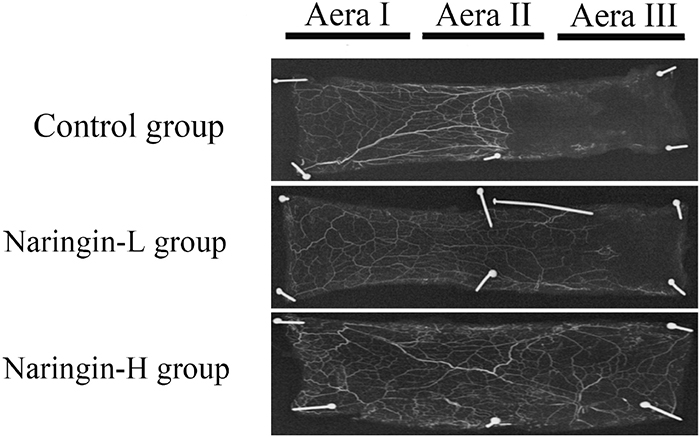 Figure 5: (A) Comparison of VEGF expression in the intermediate area II of the three groups. The immunohistochemistry test and observed under magnification 200. (B) IA value was detected to compare the level of VEGF (**p < 0.01 vs. the control group). IA, integral absorbance; VEGF, vascular endothelial growth factor.

Figure 6: (A) The blood perfusion on day 7 in three groups. (B) Mean blood flow of the second choke zone in the flap in three groups measured by laser Doppler imaging at day 7 after surgery (**p < 0.01 vs. the control group).

Acceptable functional restoration and good cosmetic results are among the desired endpoints of tumor resection. Flap placement may afford satisfactory esthetic and functional outcomes and is increasing in popularity. However, distal flap necrosis attributable to ischemia is a major problem, increasing treatment costs and in-hospital time. Ischemia, ischemia–reperfusion injury, and inflammation may all be in play [22–25]. We found that naringin protected against flap necrosis by inhibiting apoptosis, attenuating the inflammatory response and oxidative stress, and stimulating blood vessel growth.

VEGF, a multifunctional growth factor, plays a central role in angiogenesis, promoting neovascularization and endothelial cell proliferation, which in turn improve flap survival [26, 27]. Angiogenesis greatly enhances vasculogenesis by increasing the delivery levels of oxygen, nutrients, and collagen building blocks [28]. Earlier, naringin was found to trigger VEGF synthesis, to enhance angiogenesis, and to improve capillary density in rats with diabetic foot ulcers. The angiogenetic effect was especially marked [12, 29]. We found that, compared with control rats, the IA (integral absorbance) value was markedly increased in the naringin groups, as were the mean vessel density in area II and the vessel numbers revealed by flap angiography and laser Doppler imaging. However, although VEGF expression was greater in the high-dose than in the low-dose naringin group, the improvements in flap survival were similar between the two groups. Naringin indeed promoted angiogenesis, increasing vessel numbers in damaged tissue by enhancing blood supply and VEGF expression. However, angiogenesis mediated by VEGF is a double-edged sword, promoting flap survival on the one hand and facilitating tumor metastasis on the other. Therefore, the use of VEGF-enhancing drugs requires further investigation.

The pro-inflammatory growth factor TNF-α facilitates release of the inflammatory mediators interleukin (IL)-1, IL-6, and IL-8, aggravating tissue damage and triggering apoptosis. Recently, VEGF was shown to significantly reduce TNF-α expression and inflammation, both in flaps and other ischemic tissues [26, 30]. Inflammation greatly compromises flap survival [31]. The level of MDA (a major marker of lipid peroxidation) directly reflects the extent of tissue injury [32]. SOD, a crucial endogenous anti-oxidase, protects cells from injury caused by toxic oxygen-derived free radicals, and the SOD level is a sensitive indicator of antioxidant status [33]. We found that the oxidative stress level and serum levels of the pro-inflammatory cytokines TNF-α and IL-6 were significantly reduced in the naringin groups compared with the control, suggesting that naringin alleviated inflammation and oxidative stress, thus effectively preventing ischemia–reperfusion injury. The detailed mechanism involved requires further study.

The modified McFarlane flap model (3 × 9cm) was applied to every rat [34]. The area of the dorsum was divided into three equal segments: I, II and III (proximal, intermediate and distal) (Figure 8). Following the surgical procedure, all 90 rats were randomly divided into three groups: a 40 mg/kg naringin-treated group (n = 30, low-dose group); an 80 mg/kg naringin-treated group (n = 30, high-dose group) and a 40 mg/kg control group (0.5 % sodium carboxymethylcellulose) (n = 30). For oral administration, naringin was suspended in 0.5 % sodium carboxymethylcellulose. All rats were treated for 7 days. Postoperatively, all rats were housed in an environmentally controlled room, in standard experimental cages individually and fed standard rat chow and water ad libitum. Because of the self-mutilation, all rats were tied with a collar [35]. 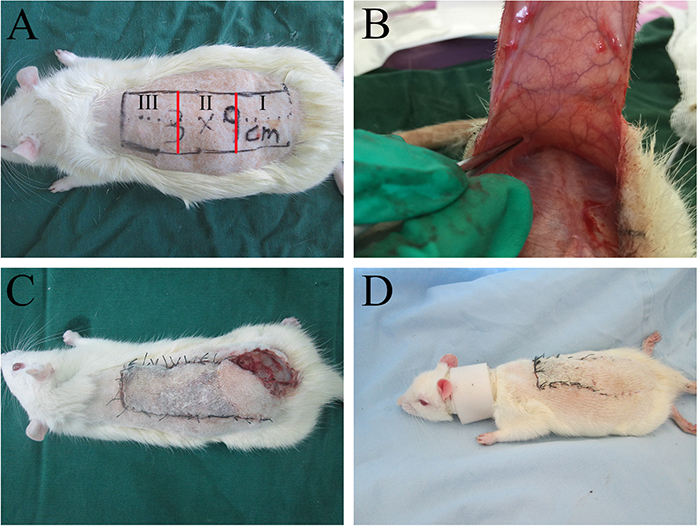 Figure 8: (A) A McFarlane flap model was designed (3×9 cm) and three parts were divided (I, II, and III); (B) no axial vessels were incorporated into the flap; (C) the rats had a self-mutilation tendency and they would bite the flaps on their back and cause flap injuries; (D) the rats were fitted with a neck collar to prevent self-mutilation.

After all rats were sacrificed, three samples (size in 1×1cm) of the centre flap tissue were harvested from each area, fixed in 4% paraformaldehyde, and routine procedures were performed. Paraffin blocks were cut into 4 μm slices, and stained with hematoxylin and eosin. The Olympus BH51 light microscope (Olympus Corporation, Tokyo, Japan; ×100 magnification) was used to evaluate the condition of tissue edema, the thickness of granulation tissue and count the number of neutrophil cells. Furthermore, in order to comprehend the condition of microvascular density, we also calculated the microvessel number in each unit area(/mm2).

After executing the rats, we weighed flap tissue using an electronic scale, and dehydrated using an autoclave with the temperature of 50°C. In order to obtain a constant weight, all samples were weighed daily and until the weight did not change for 2 days. Water content reflected the degree of edema. The percent water content was determined by the following equation: Tissue% water content = ([wet weight-dry weight]/ wet weight)×100%.

Using a 24-gauge intravenous catheter based on a modified lead oxide-gelatin inoculability tip, ten rats choosing from every group sustained whole-body angiography at 7 days after the operation [36]. Heparin saline (1%, 1.5 mL) was injected to the right carotid artery and then the contrast medium (150 mL/kg) consisted of water, lead oxide and gelatin, was followed. After fixation overnight, we radiographed the flap using an X-ray machine (54 kVp, 40 mA, 100-second exposure).

All animals were performed using a laser Doppler imaging system (Lisca PIMII, Stockholm, Sweden) on the day of sacrifice. The blood perfusion monitor (PeriFlux System 5000; PERIMED, Järfälla, Sweden) began one hour after stabilization. The second choke zone was inspected for 1 minute. The mean blood flow was expressed as perfusion units [37].

Ten tissue samples (5 × 5 mm) were gained from Areas II at 7 days after the operation, and then a series of procedures were carried out including weighing, homogenizing and diluting. SOD activity was measured by the oxidase enzymatic method, and MDA level was gauged through an approach triggered by a reaction with thiobarbituric acid at 90 to 100°C [39].

Determination of cytokines in serum by ELISA

According to the manufacturer’s instructions, the ELISA kits were applied to measure the levels of IL-6 and TNF-α.