Association of the neoadjuvant chemotherapy cycle with survival outcomes in patients with locoregionally advanced nasopharyngeal carcinoma: a propensity-matched analysis

Neoadjuvant chemotherapy (NAC) is widely used to treat locoregionally advanced nasopharyngeal carcinoma (NPC). To determine the optimal number of NAC cycles, we assessed the effect of NAC cycle on survival outcomes of locoregionally advanced NPC patients receiving NAC before concurrent chemotherapy and intensity-modulated radiotherapy. Clinical data from 1,188 non-metastatic NPC patients were retrospectively reviewed. All received ≥2 cycles of NAC added to concurrent chemoradiotherapy. Propensity score matching (PSM) was used to identify paired patients according to various covariates. In total, 297 pairs were selected. After a median follow-up time of 57 months (range: 7 to 104 months), the 5-year locoregional relapse-free survival, distant metastasis-free survival (DMFS), progression-free survival (PFS), and overall survival rates in patients treated with 2 cycles vs. 3 to 4 cycles of NAC were 91.3% vs. 87.2% (P=0.149), 93.3% vs. 88.5% (P=0.043), 88.7% vs. 81.7% (P=0.037), and 94.0% vs. 92.6% (P=0.266), respectively. On multivariate analysis, 2 cycles of NAC were associated with improved DMFS (hazard ratio, 0.499; P=0.038) and PFS (hazard ratio, 0.585; P=0.049). NAC cycle was an independent prognosticator of DMFS and PFS in univariate and multivariate analyses. Thus, 2 cycles of NAC appear sufficient, as additional cycles were not associated with added survival benefit for locoregionally advanced NPC.

However, the number of cycles of NAC that should be recommended for these patients is unclear. In previous studies [12–17], NPC patients received 2, 3, and even 4 cycles of NAC. More cycles of NAC delay IMRT delivery and prolong the wait time of IMRT. Unfortunately, longer IMRT wait time is associated with poor survival outcomes of NPC patients [18, 19]. Therefore, whether a threshold of NAC cycles exists, beyond which an impact on the survival of NPC patients is seen, needs further study. On the basis of this hypothesis, we performed a retrospective study to compare long-term survival outcomes of adding 2 cycles vs. 3 to 4 cycles of NAC to CCRT in locoregionally advanced NPC patients. To avoid the interference of covariates, we used the propensity score matching (PSM) methods to select paired patients [20].

The clinical data of 1,188 newly diagnosed locoregionally advanced NPC patients, who were initially treated with NAC followed by CCRT, were collected and retrospectively reviewed. From the original data, 297 pairs were selected by PSM. Basic characteristics of all patients are summarized in Table 1. For the selected subjects, the median age was 50 years (range, 18 to 77 years), and the ratio of males to females was 1.94:1 (392:202). There were no statistically significant differences in age, gender, stage, and treatment factors between 2 cycles and 3 to 4 cycles of NAC.

Table 1: Basic characteristic of 594 LA NPC patients between 2 cycles and 3 to 4 cycles of NAC 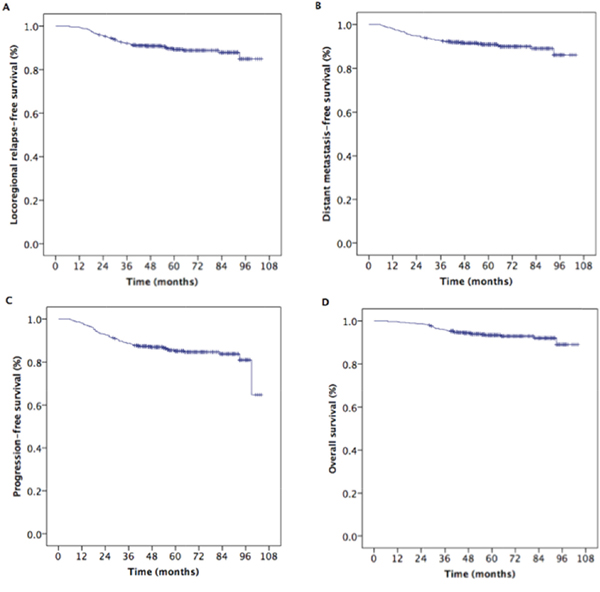 Figure 1: Kaplan-Meier estimates of the survival in 594 patients with nasopharyngeal carcinoma. 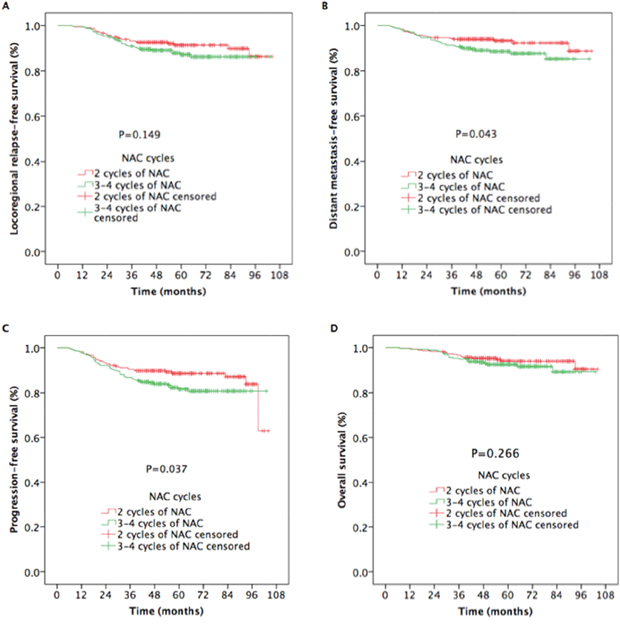 Figure 2: Kaplan-Meier estimates of the survival outcomes in nasopharyngeal carcinoma patients receiving 2 cycles and 3 to 4 cycles of NAC.

Table 3: Prognostic factors on survival outcomes of 594 NPC patients by use of univariate analysis 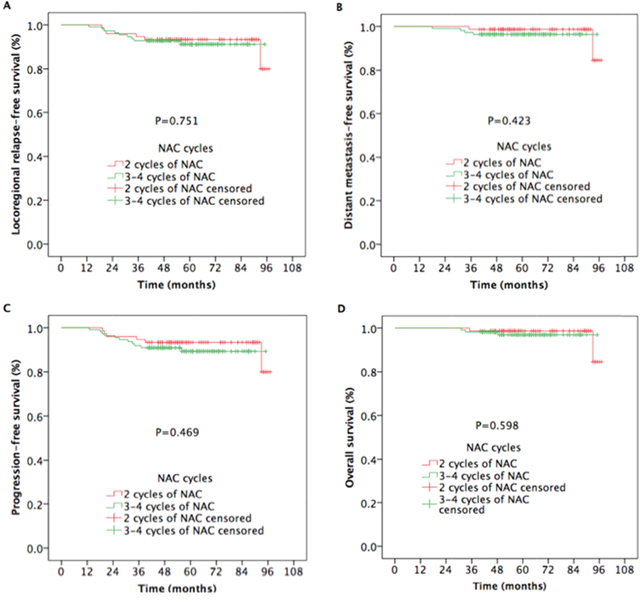 Figure 3: Kaplan-Meier estimates of survival outcomes in nasopharyngeal carcinoma patients with N0-N1 receiving 2 cycles and 3 to 4 cycles of NAC. 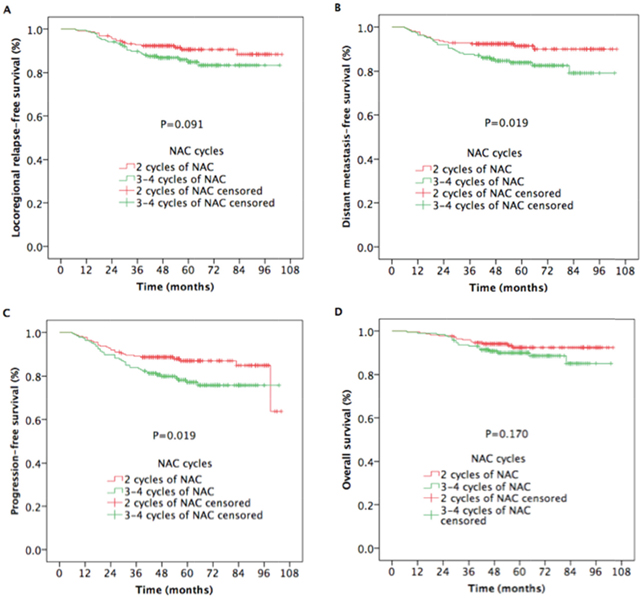 The wait time of IMRT was the interval time between cancer diagnosis and radical IMRT. Generally, cancer patients should receive radical treatment as early as possible after they are diagnosed. However, many patients were hindered in receiving timely treatment because of social factors, limited medical resources, scarcity of policy support, and treatment-related factors [22]. Unfortunately, a correlation between long wait time and poor survival outcome was found in many cancers, including breast cancer, rectal cancer, bladder cancer, and head-and-neck cancer [23–26]. Chen et al. [18] showed that a longer wait time beyond 4 weeks was associated with worse PFS, but not worse OS, in 814 NPC patients with a short-term follow-up. Another study with a large population and long follow-up revealed a correlation between prolonged wait times more than 30 days and poor survival outcome [19]. From the above two studies, we determined the influence of wait time on the survival outcome for NPC. NAC is a primary factor in longer wait time even though it has been shown to improve survival outcomes in locoregionally advanced NPC. The wait time for patients who received ≥2 cycles of NAC was more than 30 days. Thus, longer wait time reduces survival benefits of NAC in patients with locoregionally advanced NPC. So, we recommend ≥2 cycles of NAC as optimal before timely IMRT for locoregionally advanced NPC. A study by Peng et al. [27], with 247 pairs of NPC patients, including limited clinical characteristics, found no significantly prognostic difference between 2 cycles and >2 cycles of NAC, but stratified analysis demonstrated that patients receiving 2 cycles of NAC had better OS than patients receiving >2 cycles, and NAC was an independent prognostic factor of OS for the N2-N3 category. However, in the study, the wait time was not tested between the two groups. Consequently, >2 cycles of NAC were not proved to be associated with worse survival outcomes, although a statistically significant difference for N2-N3 between the two groups was seen.

In the current study, on the basis of long follow-up times, 5-year LRRFS, DMFS, PFS, and OS rates between two groups were 91.3%, 93.3%, 88.7%, and 94.0% and 87.2%, 88.5%, 81.7%, and 92.6%, respectively. However, statistically significant differences in DMFS and PFS were seen between the two groups. We identified which factors influenced survival outcome and evaluated the prognostic role of these factors by univariate and multivariate analyses. We found that N category was an independent prognostic factor of LRRFS, DMFS, PFS, and OS, and NAC cycle was an independent predictor of DMFS and PFS.

We used PSM and multivariate analysis to assess the prognostic role of NAC cycle for locoregionally advanced NPC. Our study has some limitations because of the retrospective nature, single center, and heterogeneous NAC regimens. Further prospective trails are warranted.

We found that >2 cycles of NAC before CCRT resulted in better DMFS and PFS in patients with locoregionally advanced NPC. However, because of the retrospective nature of the study, our results should be regarded as preliminary.

The patients enrolled in this study were hospitalized from May 2008 to April 2014 in the Department of Radiation Oncology, Zhejiang Cancer Hospital. The eligible patients met the following criteria: (i) histologically proved locoregionally advanced NPC, (ii) Eastern Cooperative Oncology Group performance status ≤ 1, (iii) completion of radical IMRT, (iv) received 2 to 4 cycles of NAC before CCRT, and (v) received no previous anti-cancer treatment. Of 1,188 patients, 594 (50.0%) were matched for the current study. This retrospective study was approved by the Medical Ethics Committee of Zhejiang Cancer Hospital. All the patients signed informed consent forms.

Patients had pretreatment evaluations that included complete histories, physical examinations, hematology and biochemistry profiles, chest radiographs, sonography of the abdomen, bone scans, magnetic response images of the nasopharynx, and nasopharyngoscopies. All patients were staged according to the 2010 American Joint Committee on Cancer staging system. Tumor histology was classified per the World Health Organization classification.

All patients underwent radical IMRT with simultaneous integrated boost technique that utilized 6-MV photons 2 to 3 weeks after IC. The delineation of target volumes of NPC during the treatment of IMRT was described previously [28–31]. Gross tumor volumes (GTVs) of primary tumor and the metastatic lymph nodes were defined as GTVnx and GTVnd, which were delineated according to pre-IC and post-IC MR images, respectively. The clinical target volume of nasopharynx (CTVnx) was defined as GTVnx plus a 7-mm margin that encompassed the nasopharyngeal mucosa plus 5-mm submucosal volume. The high-risk clinical target volume (CTV1) included the entire nasopharyngeal cavity, the anterior one-third to two-thirds of the clivus, the skull base, the pterygoid plates, the parapharyngeal space, the inferior sphenoid sinus, the posterior one-quarter to one-third of the nasal cavity, and the maxillary sinus and any lymph nodes in drainage pathways containing metastatic lymph nodes. The low-risk clinical target volume (CTV2) included levels IV and Vb without metastatic cervical lymph nodes.

The PTV was constructed automatically on the basis of each volume with an additional 3-mm margin in three dimensions to account for set-up variability. All the PTVs, including PGTVnx, PTVnx, PTV1, and PTV2, were not delineated outside of the skin surface. Critical normal structures, including the brainstem, spinal cord, parotid glands, optic nerves, chiasm, lens, eyeballs, temporal lobes, temporomandibular joints, mandible, and hypophysis were contoured and set as OARs during optimization.

The patients in this study underwent concurrent chemotherapy with cisplatin (80 mg /m2) divided into 3 doses administered in 3 days every 3 weeks for 2 to 3 cycles and received 21-day cycles of adjuvant chemotherapy with FP (cisplatin 25 mg/m2/d on days 1 to 3, and 5-fluorouracil 500 mg/m2/d on days 1to 3) or GP regimens within 3 to 4 weeks after RT.

The assessment of tumor response was performed three times after the completion of IC, at the end of IMRT, and 3 months after irradiation, which was based on MRI and nasopharynx fiberscope per the Response Evaluation Criteria for Solid Tumors. Systemic chemotherapy adverse events were graded per the National Cancer Institute Common Toxicity Criteria (NCI CTCAE Version 3.0), and RT-induced toxicities were scored per the Acute and Late Radiation Morbidity Scoring Criteria of the Radiation Therapy Oncology Group.

All the subjects underwent weekly examinations for treatment response and toxicities during RT. Patients were followed every 3 months in the first 2 years, every 6 months from the third to the fifth year, and then annually. Each follow-up included careful examination of the nasopharynx and neck nodes by an experienced doctor. MRI scans of the nasopharynx, nasopharynx fiberscope, chest computed tomography radiograph, and ultrasound of abdomen were performed 3 months after the completion of RT and every 6 to 12 months thereafter. Additional examinations were performed when indicated to evaluate local relapse or distant metastasis.

Descriptive statistics were used to compare the patients’ characteristics and patterns of failure between the two arms. Two independent sample non-parametric tests were used to compare the acute toxicity between the two arms. Survival curves were generated by application of the Kaplan-Meier method. The curves were compared by use of log-rank tests. Multivariate analysis was performed by use of Cox regression models to identify significant prognostic factors. HRs and 95% CIs were calculated for each prognostic factor. IBM SPSS Statistics Version 19.0 was used for all data analysis. A P < 0.05 was considered statistically significant.

We observed that an additional 2 cycles of NAC followed by CCRT might be enough and adding more cycles is not associated with survival benefit in locoregionally advanced NPC patients. Further randomized, controlled, multicenter phase III clinical trials are needed to confirm the therapeutic gain.