Gastric cancer (GC) is one of the most common digestive system malignancies and has a high mortality rate, accounting for approximately 9% of cancer deaths worldwide [1]. Most patients with newly diagnosed GC have advanced stage disease that is not resectable [2, 3]. Moreover, patients who undergo complete tumor resection have a high risk of recurrence [4]. Chemotherapy has been widely adopted to prolong survival in patients with advanced GC. However, the overall survival rate of advanced GC remains unsatisfactory due to the development of multidrug resistance [5, 6]. Therefore, the mechanisms underlying chemotherapy resistance in GC are of major interest.

Doxorubicin (DOX) is an anthracycline-based chemotherapeutic agent that has been used as the gold-standard therapy for advanced GC since 1980 [7]. However, DOX-based regimens are not currently recommended as a first-line chemotherapy strategy for GC due to frequent development of resistance and poor efficacy. The epithelial-to-mesenchymal transition (EMT) is a major mechanism associated with drug resistance. The EMT has been reported to promote cancer cell metastasis and resistance to chemotherapy [8, 9]. Recent studies demonstrated that the frequent acquisition of DOX resistance in cancer may be related to the EMT [10–14]. The protein alterations that occur during the EMT include a loss of epithelial markers, such as E-cadherin, and acquisition of mesenchymal markers, such as vimentin [15]. Several studies have investigated the relationship between the EMT and DOX-resistance in GC, and many factors involved in EMT mediated DOX-resistance have been discovered [16, 17]. However, the precise mechanisms by which the EMT is associated with DOX-resistance have not yet been fully uncovered.

Dual specificity phosphatase 4 (DUSP4), a member of the DUSP family, is also known as MAPK phosphatase 2 (MKP2). DUSP4 plays an essential role in regulation of cell proliferation and differentiation via interacting with the MAPK signaling pathway [18]. However, contradictory roles have been reported for DUSP4 in cancer. As a negative regulator of the MAPK signaling pathway, DUSP4 may represent as a tumor suppressor gene. Downregulation of DUSP4 is associated with progression in several types of cancer, including colorectal cancer [19], breast cancer [20], pancreatic cancer [21] and diffuse large B cell lymphoma [22]. However, other studies indicate that overexpression of DUSP4 promotes cancer development and progression [23–25]. Interestingly, DUSP4 has been related to drug resistance in several cancers [26–30]. However, little is known about the role of DUSP4 in DOX resistance in GC.

In the present study, we aimed to explore the role of DUSP4 in DOX resistance in GC cell lines, uncover the associated mechanisms, and investigate the link between the EMT and doxorubicin resistance in gastric cancer.

To explore the effect of DUSP4 on the sensitivity of GC cells to DOX, the expression of DUSP4 was measured by Western blotting. KATOIII and MKN45 cells expressed high levels of DUSP4 compared to BGC and SGC7901 cells (Figure 1A). Next, we measured cell viability after 48 h DOX treatment using the CCK-8 assay. All four GC cells exhibited dose-dependent reductions in cell viability in response to DOX (Figure 1B, Table 1). However, DUSP4high KATO III and MKN45 cells were more resistant to DOX than DUSP4low BGC and SGC7901 cells. The EDU cell proliferation assay confirmed these results (Figure 1C). The IC50 values of DOX in KATOIII, MKN45, BGC and SGC7901 cells at 48 h were 2.507, 3.025, 1.103 and 0.8146 μg/mL, respectively (Table 1). Moreover, treatment with DOX at the IC50 values for 48 h obviously increased the expression of DUSP4 in all four GC cell lines (Figure 1D) (**P < 0.01). Taken together, we deduced that DUSP4 may mediate DOX resistance in GC cells. 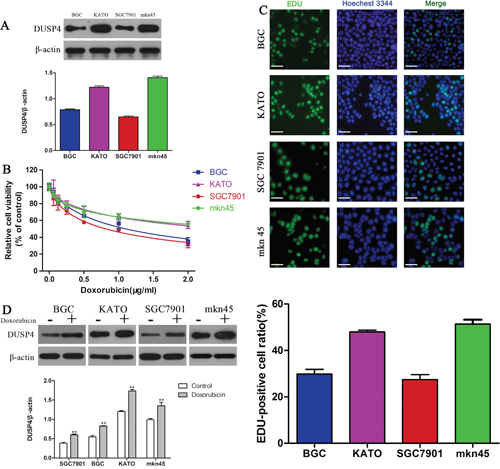 Table 1: The viability of GC cells treated with different concentrations of DOX

To further explore the relationship between DUSP4 and DOX resistance in GC cells, we employed a siRNA to knockdown DUSP4 and a plasmid to overexpress DUSP4. The efficacy of the siRNA and plasmid were confirmed by Western blotting (Figure 2A) (*P < 0.05, ***P < 0.001). The CCK-8 assay revealed knockdown of DUSP4 significantly enhanced the cytotoxicity of DOX in GC cells. Conversely, overexpression of DUSP4 significantly reduced the cytotoxicity of DOX (Figure 2B-2E, Table 2). The EDU cell proliferation assay confirmed the results of the CCK-8 assay (Figure 2F) (*P < 0.05, **P < 0.01,***P < 0.001). These data confirmed that DUSP4 significantly enhances the resistance of GC cells to DOX. 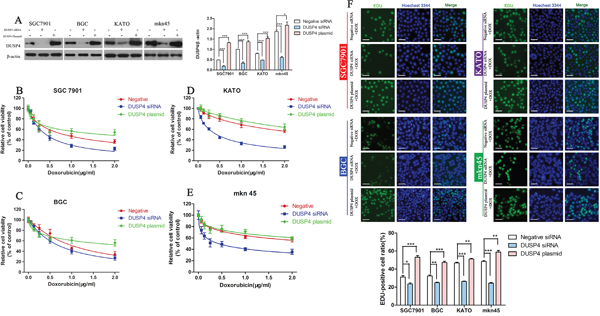 Table 2: The viability of GC cells in which DUSP4 was knocked down or overexpressed treated with different concentrations of DOX

As the EMT plays a role in chemoresistance in several solid tumors, we hypothesized the EMT may mediate DOX resistance in GC cells. To prove this hypothesis, we first investigated the expression of EMT marker proteins in the four GC cell lines by Western blotting. DOX-resistant DUSP4high KATOIII and MKN45 cells expressed low levels of E-cadherin and high levels of vimentin, in contrast to DOX-sensitive DUSP4low BGC and SGC7901 cells (Figure 3A). Treatment with the IC50 of DOX for 48 h increased vimentin expression and decreased E-cadherin expression compared to the respective untreated cells (Figure 3B) (**P < 0.01,***P < 0.001), indicating DOX can induce the EMT in GC cells. 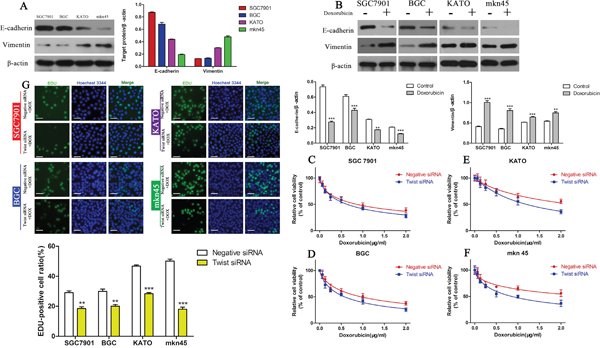 Twist is an essential regulator of the EMT in cancer cells [31]. Therefore, we used a siRNA to knockdown Twist to inhibit the EMT. The CCK-8 assay revealed that knockdown of Twist increased the sensitivity of all four GC cell lines to DOX (Figure 3C-3F, Table 3) and the EDU assay confirmed these results (Figure 3G) (**P < 0.01,***P < 0.001), strongly suggesting that the EMT contributes to DOX resistance in GC cells.

Table 3: The viability of GC cells in which Twist was knocked down cultured in different concentrations of DOX

Hypoxic culture can induce the EMT in cancer cell lines [32, 33]. To further confirm the role of the EMT in DOX resistance, we examined the viability and proliferation of GC cells cultured under hypoxic and normoxic conditions. Our results showed that DOX could reduce the viability of all four GC cell lines in a dose-dependent manner; however, cells cultured under hypoxic conditions were more resistant to DOX than those cultured under normoxic conditions (Figure 4A-4D, Table 4). The EDU assay confirmed hypoxia increased cell proliferation in a similar manner in DOX treated cells (Figure 4E) (*P < 0.05, **P < 0.01,***P < 0.001). These findings prove the EMT promotes DOX resistance in GC cells. 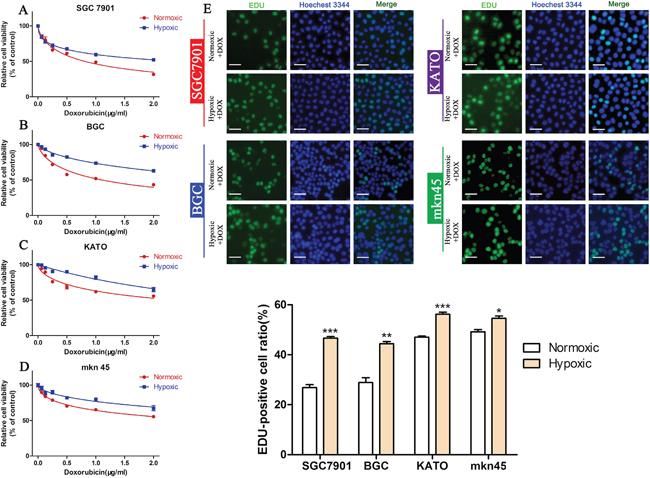 Table 4: The viability of GC cells treated with different concentrations of DOX cultured under hypoxic or normoxic conditions

Knockdown of DUSP4 inhibits the EMT in GC cells

Next, we investigated whether DUSP4 is involved in the EMT in GC cells. We transfected the DUSP4 siRNA or DUSP4 plasmid into the four GC cell lines, and quantified the expression of E-cadherin and vimentin. Knockdown of DUSP4 increased E-cadherin expression and reduced vimentin expression (Figure 5A). In contrast, overexpression of DUSP4 had the opposite effects (Figure 5A) (*P < 0.05, **P < 0.01,***P < 0.001). These results indicated DUSP4 may regulate the EMT in GC cells. 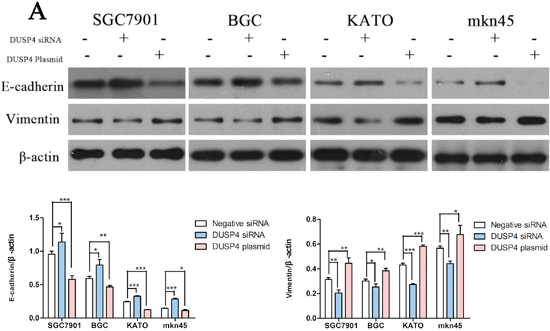 Based on the results above, we inferred DUSP4 promotes DOX resistance in GC cells by regulating the EMT. To prove this, we examined the cell viability of cells overexpressing DUSP4, transfected with the Twist siRNA to inhibit the EMT and treated with DOX. Overexpression of DUSP4 did not further enhance DOX resistance when the EMT was blocked using the Twist siRNA (Figure 6A-6D, Table 5). The EDU assay confirmed these results (Figure 6E). 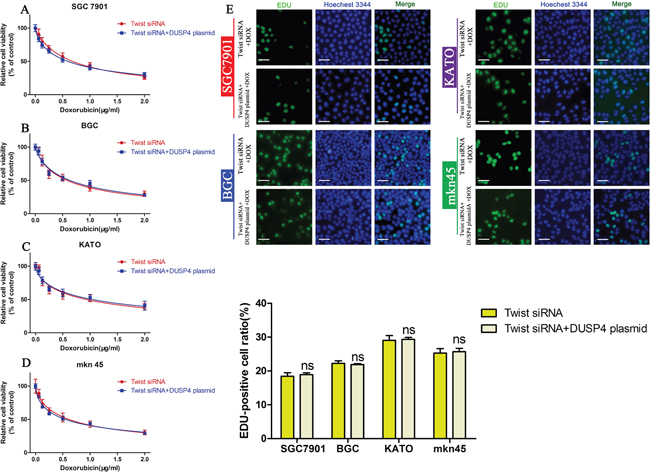 Table 5: The viability of GC cells transfected with the Twist siRNA or Twist siRNA + DUSP4 overexpressing plasmid treated with different concentrations of DOX 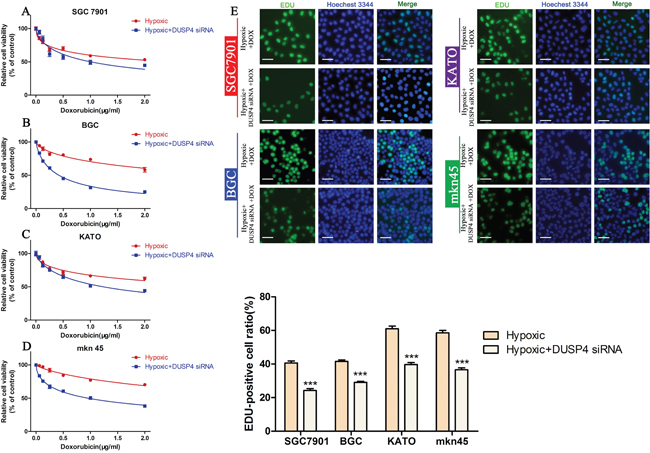 Table 6: The viability of GC cells exposed to hypoxia alone or hypoxia + DUSP4 siRNA treated with different concentrations of DOX

The dual specificity phosphatase DUSP4 specifically inactivates MAPK pathway kinases [18]. However, the role of DUSP4 in cancer remains controversial. Some studies have demonstrated DUSP4 is overexpressed and could promote progression in a number of cancers, including colorectal [19] and breast cancer [30, 35]. Conversely, other studies indicated DUSP4 is downregulated and inhibits tumor development in colorectal cancer [36–38] and breast cancer [25]. However, few studies have quantified DUSP4 expression in GC. One study reported that decreased DUSP4 expression was associated with sex, tumor size, depth of invasion and distant metastasis in human GC, and that overexpression of DUSP4 reduced GC cell viability and invasive potential and induced cell apoptosis and S phase cycle arrest [39]. However, little is known about the role of DUSP4 in chemoresistance in GC. The present study demonstrates DUSP4 promotes DOX resistance in GC, in agreement with findings in breast cancer [28].

The EMT confers increased invasion and migration ability and is associated with drug resistance [8, 9]. EMT-induced stemness may represent one potential mechanism underlying EMT-mediated chemoresistance [40]. A previous study showed that long-term, incremental DOX treatment led to drug resistance and the EMT in SGC7901/Dox cells [41]. Moreover, treatment with DOX for 48 h induced the EMT in human GC BGC-823 cells, and inhibition of β-catenin signaling suppressed the DOX-induced EMT and cell migration [16]. In agreement with these previous studies, we found the GC cell lines with a more mesenchymal phenotype, characterized by high vimentin and low E-cadherin expression, were more resistant to DOX. Furthermore, DOX induced vimentin and inhibited E-cadherin expression, indicting DOX induced the EMT in all four GC cell lines, and we confirmed the EMT mediates DOX resistance in GC.

In conclusion, our data demonstrates that high DUSP4 expression may promote the EMT in GC, whereas low DUSP4 expression may enhance DOX sensitivity. However, further research is required to determine the mechanism(s) by which down-regulation of DUSP4 inhibits the EMT and decreases the chemosensitivity of GC cells. Furthermore, these findings indicate that DUSP4 may have potential as a biomarker for monitoring DOX resistance in patients with GC and could represent a novel treatment target for GC.

The DUSP4 plasmid was designed and constructed by GeneChem Co., Ltd. using the Trans-OE expression vector. The DUSP4 plasmid or control vector (1 μg each) were transfected into GC cells using Lipofectamine 2000 (Invitrogen) according to the manufacturer’s instructions; cells were assayed at 48 h post-transfection.

Cell viability was assessed using the CCK-8 assay (Dojindo, Kumamoto, Japan). Approximately 5000 cells were seeded in 96-well plates in 100 μL medium. The cells were cultured in media containing 1% FBS for 24 h for synchronization, then different concentrations of DOX were added and the cells were incubated for 48 h. CCK-8 solution (10 μl) was added to each well, the cells were incubated for 2 h in the dark, then absorbance was measured at 450 nm using a MRX II microplate reader (Dynex, Chantilly, VA, USA). We used Prism 5 software (GraphPad, San Diego, CA, USA) to calculate the value of IC50.

Proliferation was determined using the Click-iTEdU Imaging Kit (Invitrogen) according to the manufacturer’s protocol. Briefly, cells were incubated with their IC50 of DOX for 24 h, fixed in 3.7% formaldehyde for 15 min at room temperature, and permeabilized in 0.5% Triton X-100 for 20 min at room temperature, washed twice with PBS containing 3% BSA, incubated with 0.5 mL of Click-iT® reaction cocktail for 30 min in the dark, then nuclei were counterstained with 1 mL of 1 × Hoechst 33,342 (1:2000) for 30 min. The numbers of proliferative cells (EDU-positive) in three random fields of view per slide were counted under a fluorescence microscope (Olympus, Tokyo, Japan).

SPSS17.0 software was used for statistical analysis. Data are expressed as the mean ± SD of three independent experiments and two groups were compared using the two-tailed Student’s t-test and one-way analysis of variance (ANOVA) was used to compare multiple groups. Statistical significance was accepted if P < 0.05.