Ovarian cancer is one of the major cancer types. NK-92 cell line, which has consistently and reproducibly high anti-tumor cytotoxicity, may be used for immunotherapy against ovarian cancer. Understanding the mechanisms that regulate the anti-tumor activity of NK-92 cells is important for developing novel therapeutic strategies. In the current study, using an ovarian cancer xenograft mouse model, we identified the up-regulation of sestrin2 (SESN2) and sestrin3 (SESN3) in intratumoral NK-92 cells. Lentivirus-transduced NK-92 cells, which overexpressed SESN2 or SESN3 after doxycycline treatment, exhibited less expression of activating receptors, perforin and granzyme B. Overexpression of SESN2 and SESN3 impaired tumoricidal effect of NK-92 cells both in vitro and in vivo. Furthermore, overexpression of SESN2 and SESN3 inhibited mTORC1 signaling while promoting AMPK signaling in NK-92 cells. Taken together, our data highlights the crucial effects of SESN2 and SESN3 on NK-92 cell-mediated anti-ovarian cancer activity. This study might be valuable for designing a novel therapeutic strategy for ovarian cancer.

Ovarian cancer is the one of the most common cancer in women all over the world. Although surgery and chemotherapy are available, the 5-year survival rate is still relatively low. Immunotherapy could be a promising therapeutic approach since ovarian cancer is an immunogenic tumor that can be recognized by the host immune system [1]. Recently NK-92 cell line has shown promising tumoricidal potency and therefore has undergone intensive study [2]. NK-92 cell line is easy to be genetically modified to distinguish certain tumor antigens or to promote the activity of monoclonal antibodies via antibody-dependent cytotoxicity [3]. Currently it is the only NK cell line which has undergoing clinical trials [4–6]. In addition, NK-92 cell line has been shown to kill ovarian cancer cells including OVCAR-3 [7–9]. However, the molecular mechanisms by which NK-92 cell activity is regulated in ovarian cancer remains unclear. NK cells might reduce or even lose their cytotoxic activity against tumor cells in some tumor patients [10, 11], due to altered expression of activating receptors and inhibitory receptors.

Sestrins (SESNs) are a family of highly conserved proteins that are induced upon various conditions of stress, including DNA damage and oxidative stress [12]. Their functions have not been well documented. SESN1 and SESN2 are intracellular leucine sensors and p53 target genes that restrain mTORC1 signaling [13, 14]. SESN3 enhances hepatic insulin sensitivity through activation of mTORC2-Akt signaling [15], and it also inhibits mTORC1 [16]. Due to the importance of mTORC1 for immune cell fucntions [17, 18], it is likely that SESNs impact immune reactions. Indeed, SESNs inhibit T cell immunity [19], maintain macrophage survival and inhibit inflammatory response [20, 21]. However, the significance of SESNs for NK cell development and function has not been addressed. 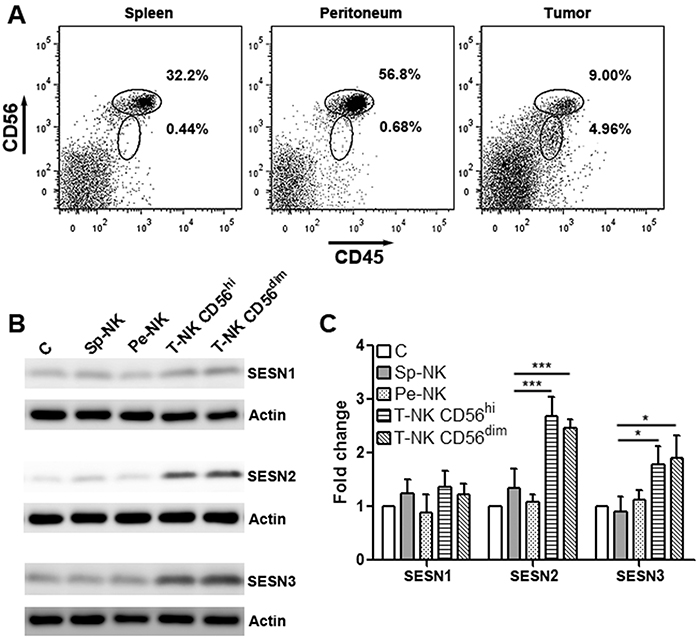 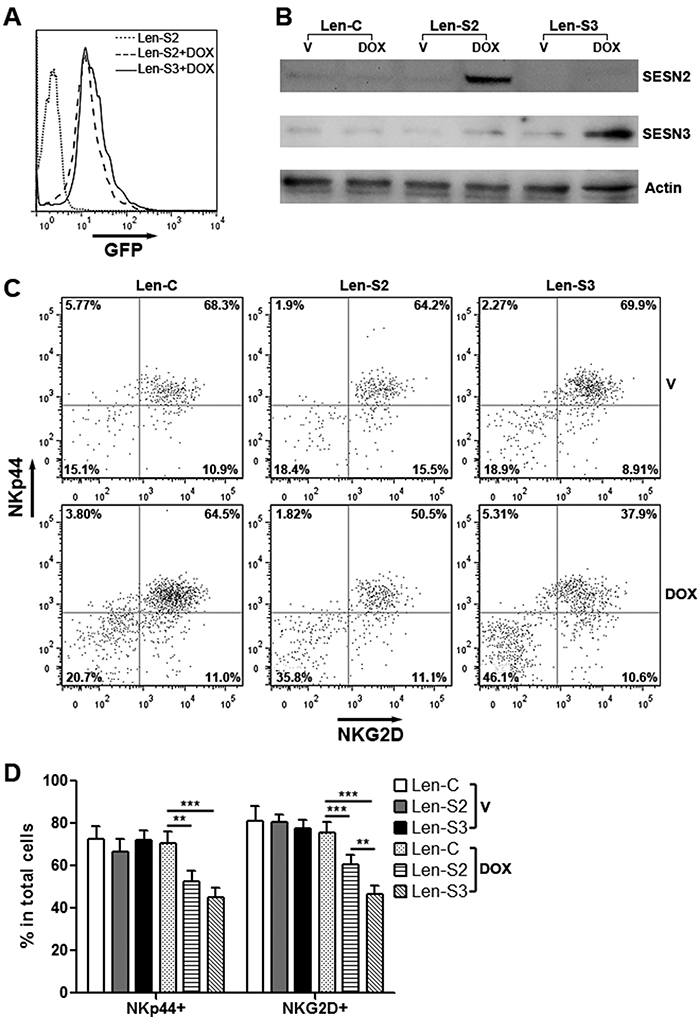 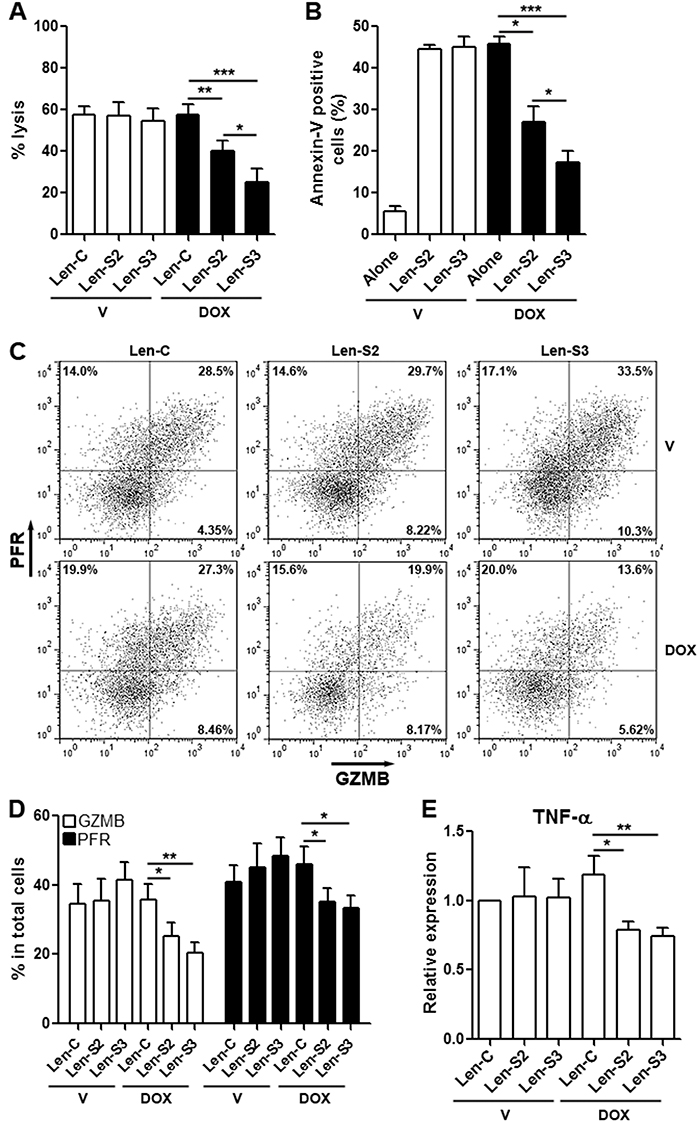 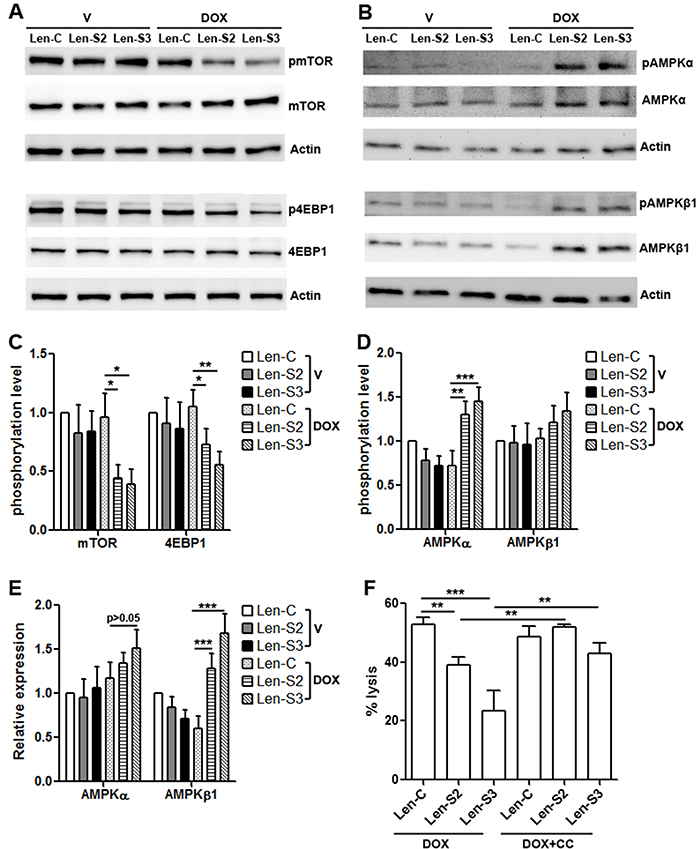 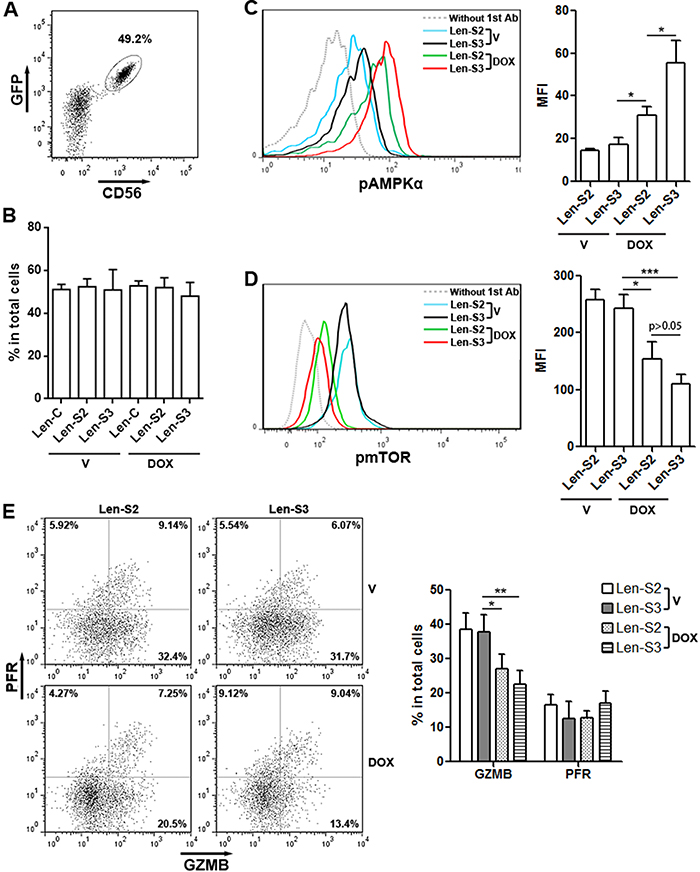 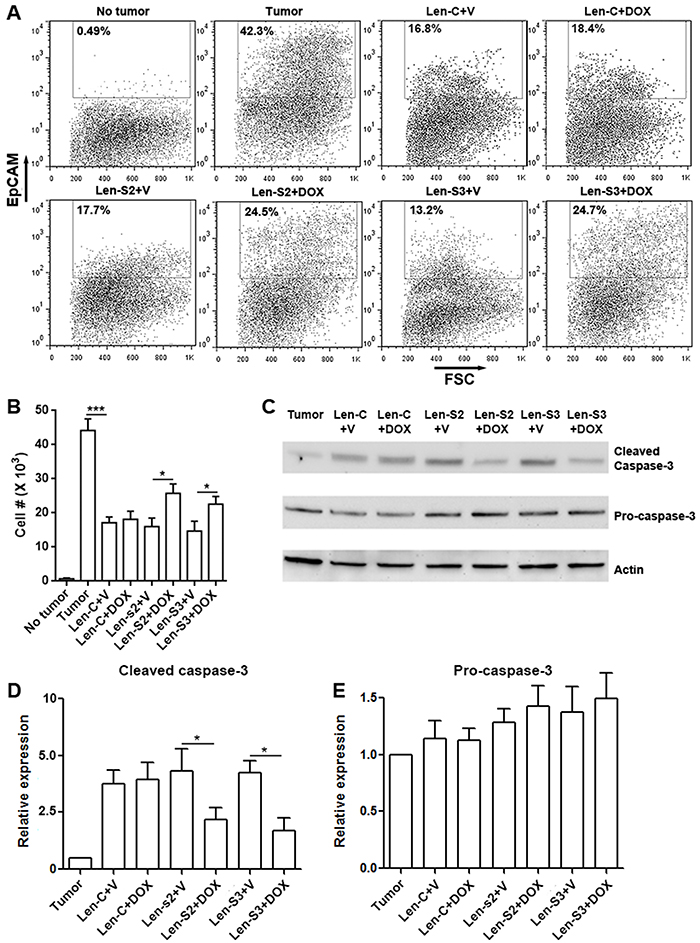 SESNs are a family of highly conserved proteins that are induced upon various conditions of stress, including DNA damage and oxidative stress [12]. Physiologically, the activity of SESNs is modulated by nutrients including amino acids at both transcriptional and post-transcriptional levels. SESNs suppress oxidative damage through activation of Nrf2, autophagic removal of impaired mitochondria, and detoxification of reactive oxygen species via its peroxidase activity [12].

However, the significance of SESNs for immune cell development and functions have not been fully elucidated, probably due to their low expression levels in normal immune cells and organs. In this study we identified up-regulation of SESN2 and SESN3 in intratumoral NK-92 cells, suggesting that the tumor microenvironment induced the expression of SESN2 and SESN3. However, the factors that induced SESN2 and SESN3 expression remain unclear. A previous research shows that NO and hypoxia up-regulate SESN2 in macrophages [28]. Indeed, hypoxic stress inside the tumor microenvironment impairs NK cell cytotoxicity [29], probably through inhibiting expression of activating receptors, granzyme B and perforin [30, 31]. Other factors such as mitochondria-dependent ROS production [32] and Toll-like receptor signaling [33] might also induce SESN expression. Interestingly, CD56, CD16 and CD158b are differentially expressed on NK cells in tumor-involved lymph nodes and uninvolved lymph nodes [34]. It will be necessary to check if their expression are intertwined with SESN expression.

The lentiviral system we used is a tetracycline inducible expression system in which SESN expression was induced by doxycycline, therefore avoiding immediate phenotypic and functional alterations of NK-92 cells after lentiviral transduction. We revealed that SESN2 and SESN3 suppressed tumoricidal activity of NK-92 cells. Notably, SESN2 or SESN3-induced phenotypic and functional changes of NK-92 cells were consistent with previously reported hypoxia-mediated changes of NK cells [30, 31]. Therefore, our data suggests the role of hypoxia in the up-regulation of SESNs. Interestingly, SESN3 seemed to be more potent in inhibiting NK-92 cell activity, suggesting that SESN3 might be more active than SESN2. In addition, whether SESN2 and SESN3 have mutual effects on one another needs to be studied in future. Moreover, it will be interesting to check whether normal NK cells up-regulate SESN expression in patients with ovarian cancer or other cancers.

The positive role of mTOR signaling, and the negative role of AMPK signaling in NK cell maturation and activation have been reported [35–37]. The effects of SESNs on mTOR and AMPK signaling have been disclosed in recent studies. SESNs inhibit mTORC1 kinase activation through direct interaction with GATOR2 [16], or through activation of AMPK and TSC [38]. Consistently, here we showed that SESNs-mediated AMPK signaling suppressed mTORC1 signaling in NK-92 cells. Interestingly, the high level of activated AMPKβ1 in SESN-overexpressing NK-92 cells resulted from up-regulation of AMPKβ1 protein, rather than up-regulation of phosphorylation. This data raises the possibility that SESNs might enhance AMPKβ1 expression. Indeed, it has been reported that SESN2 increases mRNA levels of AMPKα1, β1 and γ1 in breast cancer cells [38].

In conclusion, our data highlights the negative effects of SESN2 and SESN3 on NK-92 cell-mediated anti-ovarian cancer activity. Downregulating the expression of SESNs could be beneficial for NK-92 cell-based therapy against ovarian cancer.

Animal tests were approved by the Fujian Medical University Animal Care and Use Committee, and were conducted in accordance with institutional guidelines for animal use. Eight week old NOD/SCID/γc−/− mice (C57BL/6J background) were purchased from Beijing Vitalstar Biotechnology (Beijing, China). The subcutaneous tumor xenograft model was established by subcutaneous inoculation of 1 × 106 OVCAR-3 cells on the left flank of each mouse. Thirty days later, NK-92 cells (1 × 107 cells in 100 μl of PBS) were injected into the peritoneum once a day for 2 days. Each mouse then received intraperitoneal injections of recombinant hIL-2 (5 μg per mouse per day) for 6 days. At day 37 after inoculation, peritoneal cells were collected by rinsing the peritoneal cavity with 1 ml of PBS. Spleens and tumor xenografts were mechanically dissociated on 70-μm cell strainers to prepare single cell suspensions.

Plasmids pRK5-FLAG-SESN2, pRK5-FLAG-SESN3 and pCAG-GFP were purchased from Addgene (Cambridge, Massachusetts, USA). pLVX-TRE3G-IRES vector was purchased from Shanghai TranSheepBio Co., Ltd (Shanghai, China). The following primers were used to amplify human SESN2 or SESN3 coding sequences and EGFP sequence from these plasmids: SESN2 (5’-ggatccatgatcgtggcggactccgagtg-3’ and 5’-gcggccgctcaggtcatgtagcgggtgatgg-3’); SESN3 (5’-ggatccatgaaccggggcggcggcagc-3’ and 5’-gcggccgctcaggtcaaatgccgagttatgg-3’); EGFP (5’-cccgggatggtgagcaagggcgagg-3’ and 5’-gaattccttgtacagctcgtccatgc-3’). Platinum™ Taq DNA Polymerase (Thermo Fisher) was used for PCR. SESN2 or SESN3 coding sequences were inserted into pLVX-TRE3G-IRES vector via digestion with restriction endonucleases BamHI and NotI, followed by ligation with T7 DNA Ligase. The new pLVX-TRE3G-SESN2-IRES and pLVX-TRE3G-SESN3-IRES vectors were further ligated with EGFP sequence after digestion with SmaI and EcoRI. The resultant vectors were designated pLVX-TRE3G-SESN2-IRES-EGFP and pLVX-TRE3G-SESN3-IRES-EGFP.

For packaging lentiviruses, 2.5×106 HEK293 cells were cultured with 25 μM chloroquine diphosphate (Sigma-Aldrich). 0.72 pmol pRSV-Rev, 1.3 pmol pMDLg/pRRE (both from Addgene), 1.64 pmol pLVX-TRE3G-SESN2-IRES-EGFP or pLVX-TRE3G-SESN3-IRES-EGFP were mixed with 83.4 μg of PEI in 1 ml of Opti-MEM (Gibco). The mixture was then added to HEK293 cells for 18 hours before refreshing the medium. The viral supernatant was harvested 48 and 72 hours later. Lentivirus containing SESN2 or SESN3 sequence was designated Len-S2 and Len-S3, respectively. Lentivirus prepared using empty pLVX-TRE3G-IRES vector was designated Len-C. Packaging of lentivirus containing rtTA3 sequence (Termed Len-rtTA3) was conducted the same way as above, except that pLenti CMV rtTA3 Blast vector (Addgene) was used.

Lenitvirus-transduced NK-92 cells were pre-treated with or without 200 ng/ml doxycycline for 48 h. These cells were then co-cultured with OVCAR-3 cells for 4 h at 37°C (effector : target = 10:1). Cell lysis was determined using LDH Cytotoxicity Assay Kit (Thermo Fisher), because LDH release is widely used in cytotoxicity assay [40]. OVCAR-3 apoptosis was distinguished by staining the whole cells with PE anti-CD56 antibody and APC Annexin-V, because OVCAR-3 cells do not express CD56. In some experiments, during the last 4 hours of doxycycline treatment, NK-92 cells were treated with10 μM compound C for 4 hours before co-culture.

All authors have read and approved the final manuscript.