Molecular targeted agents as second-line treatment for hepatocellular carcinoma: a meta-analysis and review

It is unclear whether targeted agents can produce survival advantage in patients with advanced HCC previously treated with sorafenib. We performed this meta-analysis of randomized trials and reviewed clinical outcomes of molecular targeted agents in the second-line treatment for advanced HCC. A systematic computerized search of the electronic databases PubMed, Embase, Google Scholar, and Cochrane Library (up to May 2017) was carried out. From six studies, 2,388 patients were included in the meta-analysis. Almost all patients were treated with sorafenib as first-line therapy. Compared with placebo, targeted agents significantly improved time-to-progression (hazard ratio = 0.62, 95% confidence interval: 0.49–0.78, P < 0.0001). In terms of overall survival, targeted therapy tended to improve prognosis (hazard ratio = 0.86, 95% confidence interval: 0.74–1.01, P = 0.06). In conclusion, this meta-analysis indicates that molecular targeted agents have a potential to improve prognosis after failure of first-line treatment with sorafenib in patients with advanced HCC.

Hepatocellular carcinoma (HCC) is the fifth most common cancer worldwide [1–3]. Despite the recent advances in diagnostic and therapeutic modalities, HCC is still one of the major causes of cancer-related death [2, 3]. Surgical resection or ablation is the first choice of treatment for early stage HCC and chemoembolization is considered for patients with disease confined to the liver. However, locoregional therapies is possible in less than half of patients because of impairment of liver function caused by underlying cirrhosis or advanced disease at the time of diagnosis [4]. Moreover, about 70% of patients who underwent successful resection eventually relapse or develop de novo tumors [5].

For patients with advanced HCC, first-line treatment with sorafenib is recommended. Sorafenib is an oral, multi-targeted receptor tyrosine kinase inhibitors (TKIs) targeting vascular endothelial growth factor receptor (VEGFR), platelet-derived growth factor receptor (PDGFR), and RAF. In the SHARP trial, sorafenib showed a significant increase in overall survival (OS) (from 7.9 to 10.7 months, P < 0.001) and time-to-progression (TTP) (from 2.8 to 5.5 months, P < 0.001) compared with placebo [6]. Since these results with sorafenib were published in 2008, there have been no targeted agents to improve survival outcomes over sorafenib in the first-line treatment setting [7, 8]. Although sorafenib has significantly improved survival in advanced HCC, most patients show disease progression on/after or are intolerant to sorafenib in clinical practice. Therefore, there is an unmet need for effective salvage treatment after failure of sorafenib.

With more understanding of molecular mechanisms of pathogenesis, several novel targeted agents have been investigated in advanced HCC [8, 9]. Recently, a phase III placebo-controlled RESORCE trial reported that regorafenib significantly improved OS of patients with sorafenib-refractory HCC [10]. However, there has been a debate as to whether targeted agents can produce survival advantage in patients with advanced HCC previously treated with sorafenib. We performed this meta-analysis of randomized trials and reviewed clinical outcomes of molecular targeted agents as a second-line treatment for advanced HCC.

Figure 1 shows the flowchart of our study. A total of 159 potentially relevant studies were initially found, but 146 of them were excluded after screening the titles and abstracts. Of the remaining 13 potentially eligible studies, 7 were further excluded because they were non-randomized phase II trials. Finally, six studies were included in the meta-analysis [10–15]. 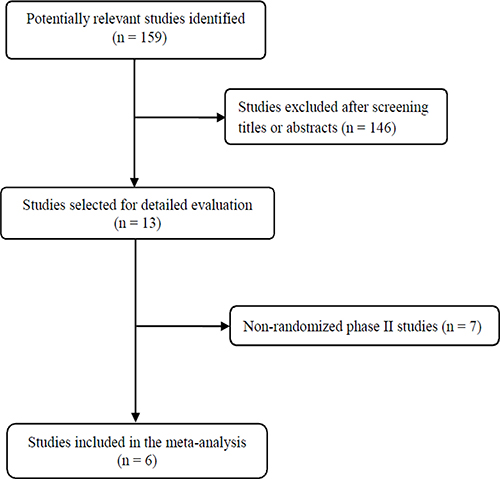 Table 1 summarizes the main characteristics and clinical outcomes of the six included studies. There were four phase III trials [10, 11, 13, 15] and two phase II trials [12, 14]. From the six studies, 2,388 patients were included in the meta-analysis. Almost all patients (99%) were treated with sorafenib as first-line therapy.

Figure 2: Forest plots for time-to-progression (A) and overall survival (B).

Figure 3: Funnel plots for publication bias regarding time-to-progression (A) and overall survival (B).

Patients with advanced HCC usually show a poor prognosis with few systemic therapeutic options. A considerable number of molecular targeted agents with different mechanisms of action have been tested in advanced HCC: however, most of them have shown a limited clinical value. As of now, sorafenib is the only agent approved by the U. S. Food and Drug Administration (FDA) for the first-line therapy of patients with advanced HCC. However, the efficacy of sorafenib is usually short-lived and considerable number of patients experience severe toxicities [6, 16]. Outcomes in the setting of sorafenib failure (resistance or intolerance) are poor, with a median OS for placebo arms of second-line trials in the range of 7 to 8 months. Until recently, however, no established agents have been existed for the treatment of patients with advanced HCC after failure of sorafenib.

There are four randomized trials that have tested a targeted agent as rescue therapy in comparison with placebo in patients with sorafenib-refractory HCC [10, 11, 13, 15]. Within the past few years, three candidate agents including brivanib (BRISK-PS), everolimus (EVOLVE-1), and ramucirumab (REACH) failed to meet the primary endpoint (OS) in placebo-controlled, phase III trials [11, 13, 15]. Brivanib is a dual inhibitor of the VEGFR- and FGFR-mediated pathways. In a phase II trial, brivanib showed a promising activity with a median OS of 9.8 months in patients with HCC resistant to anti-angiogenic agents [17]. In the subsequent phase III BRISK-PS study of 395 patients with advanced HCC who were resistant or intolerant to sorafenib, however, the drug showed no significant survival benefit versus placebo [11]. Compared with placebo, brivanib significantly improved overall response rate (ORR) (10% vs. 2%, P = 0.003) and TTP (median 4.2 vs. 2.7 months, HR = 0.56, 95% CI: 0.42-0.76, P < 0.001). However, the drug failed to meet the primary endpoint of OS improvement (median 9.4 vs. 8.2 months, HR = 0.89, P = 0.3307). The EVOLVE-1 study evaluated the mTOR inhibitor everolimus versus placebo in patients with advanced HCC who failed sorafenib [13]. Despite antitumor activity in phase I/II studies, there was no significant difference in OS between everolimus (median 7.6 months) and placebo (median 7.6 months) (HR = 1.05, 95% CI: 0.86–1.27, P = 0.68). Ramucirumab is a recombinant monoclonal antibody to VEGFR-2. As an inhibitor of angiogenesis, ramucirumab was expected to be effective in HCC, which is a highly angiogenic tumor. In the phase III REACH trial, ramucirumab was associated with a significant improvement in PFS (median 2.8 vs. 2.1 months, HR = 0.63, P < 0.001) [15]. However, the drug also failed to observe a significant OS benefit versus placebo (median 9.2 vs. 7.6 months, HR = 0.87, 95% CI: 0.72–1.05, P = 0.14).

Several plausible hypotheses may be proposed to explain reasons for these failures in the second-line treatment for advanced HCC. First, the failures might be related to the high molecular heterogeneity of HCC. Second, selection bias between treatment arms caused by inadequate patient stratification might be attributable to the negative results. Third, insufficient exploration of liver toxicities in phase II trials may have led to more discontinuations of test drugs than initially anticipated. Finally, poor performance status of patients may inevitably affect the survival data.

On April 27, 2017 the FDA approved the use of regorafenib for patients with advanced HCC who have been previously treated with sorafenib. Regorafenib is an oral multi-kinase inhibitor that blocks VEGFR, PDGFR, RET, c-KIT, BRAF, and fibroblast growth factor receptor (FGFR). The approval was based on the RESORCE study of 573 patients with documented disease progression following sorafenib [10]. Patients were randomly allocated to receive regorafenib 160 mg orally once daily plus best supportive care (BSC) or matching placebo with BSC for the first 21 days of each 28-day cycle. The drug significantly increased OS (median 10.6 vs. 7.8 months, HR = 0.63, 95% CI: 0.50–0.79, P < 0.0001) and progression-free survival (PFS) (median 3.1 vs. 1.5 months, HR = 0.46, 95% CI: 0.37–0.56, P < 0.0001) compared with placebo. The common adverse events observed in 20% or more of patients included pain, hand-foot skin reaction, fatigue, diarrhea, decreased appetite, hypertension, infection, dysphonia, elevated bilirubin, fever, mucositis, weight loss, rash, and nausea.

In the current meta-analysis of the six randomized, placebo-controlled trials in HCC patients who failed first-line therapy (mostly sofrafenib), molecular targeted agents significantly improved TTP (HR = 0.62, P < 0.0001). In terms of OS, targeted therapy tended to improve prognosis (HR = 0.86, P = 0.06), compared with placebo. These findings suggest that targeted agents may be a considerable therapeutic option for patients with advanced HCC that has progressed on sorafenib. Because four individual studies failed to meet the primary endpoint of OS improvement [11–15], however, there seem to be a critical need to identify biomarkers that can predict the efficacy of each targeted agent.

Our meta-analysis has several inherent limitations that need to be noted. First, the small number of included studies is a major limitation of this meta-analysis. Second, the individual studies had been conducted with various targeted agents with different mechanisms of action. Third, the impact of targeted therapy on quality of life could not be analyzed due to the lack of available data. Finally, papers published only in English were included, which might bias the results.

In conclusion, this meta-analysis indicates that targeted agents have a potential to improve prognosis in patients with advanced HCC after failure of first-line treatment with sorafenib. These results suggest that subsequent targeted therapy may be a considerable option for HCC patients who progressed during or after sorafenib treatment or were intolerant to the drug. However, there is an urgent need to discover biomarkers that can predict the efficacy of each targeted agent.

We performed this study according to the Preferred Reporting Items for Systematic Reviews and Meta-Analyses (PRISMA) guidelines [20]. A systematic computerized search of the electronic databases PubMed, Embase, Google Scholar, and Cochrane Library (up to May 2017) was carried out. We also reviewed abstracts presented in the American Society for Clinical Oncology (ASCO) Annual Meeting, ASCO Gastrointestinal Cancers Symposium, and European Society for Medical Oncology (ESMO) Congress. The search used the following keywords: “hepatocellular carcinoma or hepatoma or liver neoplasm,” and “second-line,” and “randomized.” The related articles function in PubMed was also used to identify all relevant articles.

Eligible studies should meet the following inclusion criteria: (i) randomized, controlled phase II or III trials; (ii) patients with previously treated advanced HCC; (iii) randomization of patients to either a targeted agent or best supportive care with or without placebo; (iv) HRs and their 95% CIs for TTP and/or OS provided.

Data extraction was carried out independently by two investigators (BJK and HJJ). If these two authors did not agree, the principle investigator (JHK) was consulted to resolve the dispute.

The statistical values were obtained directly from the original articles. The effect size of TTP and OS was pooled through HR and its 95% CI. The RevMan software (version 5.2) was used to combine the data. Heterogeneity across studies was examined by the Q statistic and the I2 inconsistency test. The fixed-effects model (Mantel–Haenszel method) was selected for pooling homogeneous outcomes when P ≥ 0.1 and I2 ≤ 50%, and the random-effects model (DerSimonian–Laird method) was used for pooling heterogeneous outcomes when P < 0.1 and I2 > 50%.

The plots show a summary estimate of the results from all the studies combined. The size of each square represents the estimate from each study and reflects its statistical ‘weight.’ Results are presented as forest plots, with diamonds representing estimates of the pooled effect and the width of each diamond representing its precision. The line of no effect is number one for binary outcomes, which depicts statistical significance if not crossed by the diamond [21]. All reported P-values were two-sided and P < 0.05 was considered statistically significant.

The possibility of publication bias was assessed with visual inspection of the funnel plots [22] and by performing Egger’s test [23].