Most patients with hepatocellular carcinoma (HCC) have known etiological factors, such as hepatitis B virus (HBV), hepatitis C virus (HCV), and alcoholic liver disease [1-3]. Different etiological factors may cause diverse carcinogenic processes and result in various biological behaviors. One of the unique biological behaviors of HCV-related HCC is the increased angiogenesis. By evaluation of microvessel density in HCC tumor samples from patients with HBV or HCV infection, HCV-related HCC has been demonstrated to exhibit higher angiogenic activity [4]. In an in vitro study, the conditioned medium collected from HCV-infected HCC cells induced more angiogenesis in the chick chorioallantoic membrane assay than that from uninfected HCC cells did [5]. 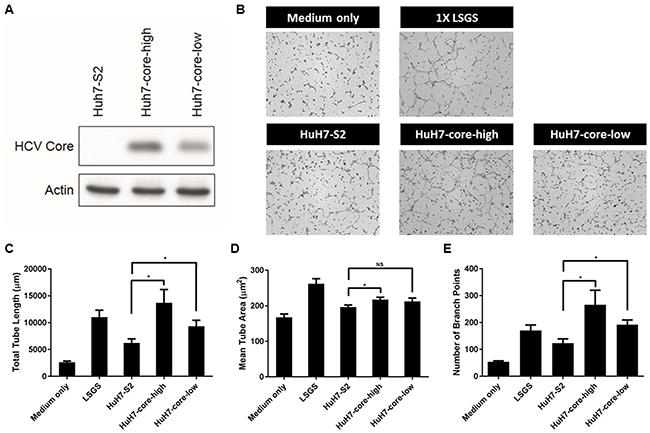 Through the Matrigel plug assay, we confirmed that HCV core protein expression potentiated the in vivo angiogenesis activity of HCC cells. Seven days after the Matrigel plugs containing the culture media of HCC cells were implanted in mice, the plugs containing the culture media of HuH7-core-high and HuH7-core-low cells exhibited higher blood content than the plugs containing HuH7-S2 cell culture media did (Figure 2A). A quantitative analysis confirmed this finding and revealed a similar dose-dependent effect of the HCV core protein on the hemoglobin content, a surrogate indicator of angiogenesis. 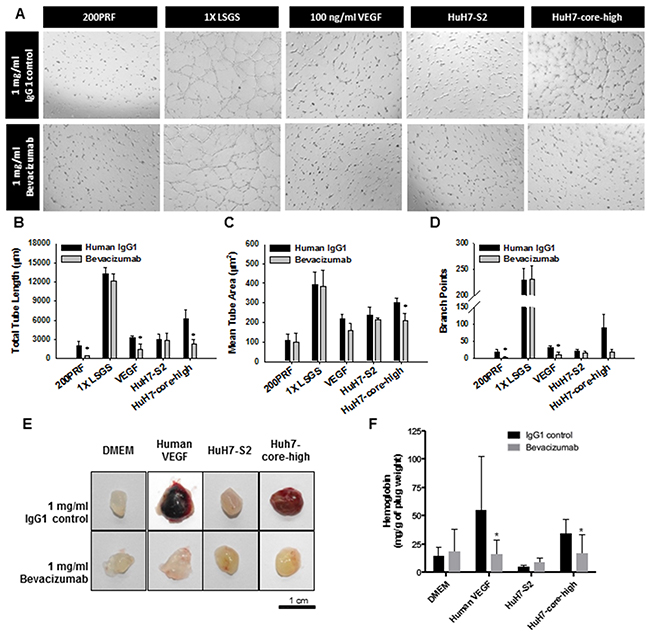 To identify the potential mechanisms underlying increased VEGF mRNA and protein expression in HuH7 cells expressing the HCV core protein, we examined the promoter region of VEGF and observed that this promoter region contains binding sites for several transcription factors, including activator protein-1 (AP-1) and signal transducer and activator of transcription 3 (STAT3) (Figure 4A). AP-1 activity was significantly increased in HuH7-core-high cells compared with HuH7-S2 cells (Figure 4B), but STAT3 activity was similar between HuH7-S2 and HuH7-core-high cells (Figure 4C). Immunofluorescence staining showed that HuH7-core-high cells had higher expression and more nuclear localization of phospho-c-jun (p-c-jun) (Figure 4D) and phospho-c-fos (p-c-fos) (Supplementary Figure 1), which constitute the AP-1 heterodimer, than HuH7-S2 cells had. By contrast, we found no significant variations in the MAPK and PI3K/Akt pathways among the HuH7-S2, HuH7-core-high, and HuH7-core-low cell lines (Figure 5A and 5B). 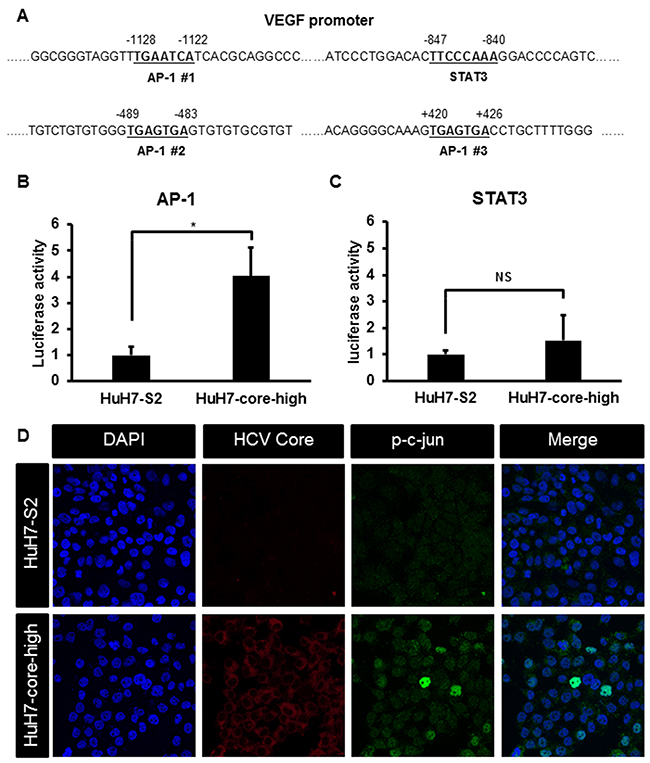 Figure 4: (A) Sequence of the VEGF promoter region showing the binding sites for AP-1 and STAT3. (B-C) Reporter assays showing the activity of transcription factors AP-1 (B) and STAT3 (C) in HCC cells. Data are presented as the relative luciferase activity (mean ± SEM) compared with that of HuH7-S2 cells. *: p < 0.05; NS = not significant. (D) Images (200×) of immunofluorescence staining results of HuH7-S2 and HuH7-core-high cells with DAPI for nuclear staining (blue) and antibodies against HCV core protein (red) and p-c-jun (green). 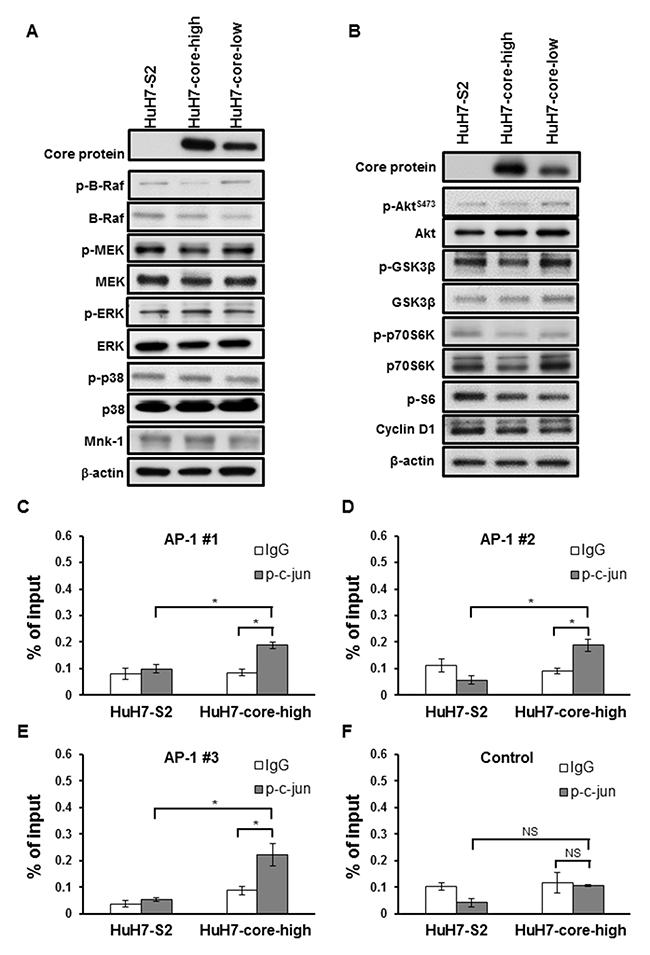 Figure 5: (A-B) Western blots showing the expression of proteins associated with the MAPK (E) and the PI3K (F) pathways in HCC cells. (C-F) Chromatin immunoprecipitation assay using control IgG or the anti-p-c-jun antibody. We compared the DNA fragments harboring AP-1 binding sites (C-E) and those without (F) after enrichment with control IgG or anti-p-c-jun antibody. The total DNA input amount was used as the reference. All data are presented as mean ± SEM. *: p < 0.05; NS = not significant.

The chromatin immunoprecipitation assay confirmed the binding of AP-1 to the promoter region of VEGF. In HuH7 cells expressing HCV core protein, immunoprecipitation with anti-p-c-jun antibody enriched the DNA fragments of the VEGF promoter harboring the AP-1 binding sites (Figure 5C-5E), but not the fragments without the AP-1 binding site (Figure 5F). Such enrichment was not found in control HuH7 cells (Figure 5C-5E). 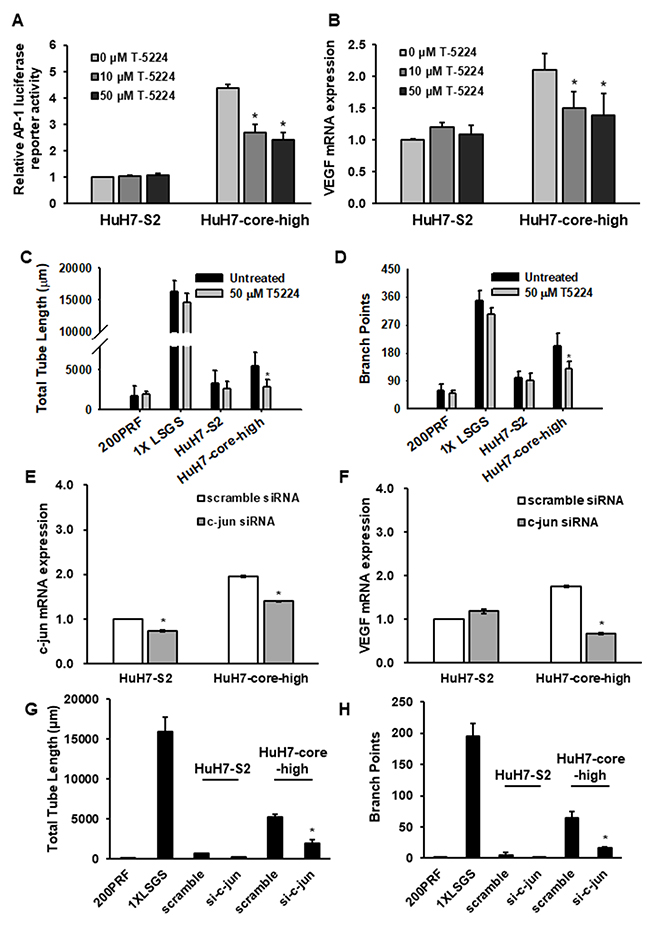 We used 2 assays to evaluate the angiogenic activity: the Matrigel plug assay is an in vivo assay that uses the hemoglobin concentration as a surrogate marker of vascular density, whereas the tube formation assay offers a direct observation of microvessels but neglects the effect of tissues and cells other than cancer cells. Although both assays have limitations, they displayed similar results showing that HCV core protein dose-dependently increases the proangiogenic activity of HCC cells. These data collectively suggest that the HCV core protein potentiates the proangiogenic activity of HCC cells by inducing secretory proangiogenic factors in HCC cells. We demonstrated that VEGF expression was increased in HCV core protein-expressing HCC cells. However, additional studies are warranted to determine whether other angiogenic factors, such as VEGF-C and ANGs, are involved.

Although we demonstrated that the HCV core protein was associated with the proangiogenic activity of HCC cells, other components of HCV may also be involved. For example, the envelope protein E2 has been reported to upregulated matrix metalloproteinase-2 [10], and the nonstructural protein NS5A has been reported to increase the expression of cyclooxygenase-2 [11]. These proteins may also contribute to the increased angiogenic activity in HCV-related HCC.

This study has other limitations. We did not transfect the entire virus because HCC cells allowing HCV replication might be substantially different from other HCC cell lines. For example, HuH7.5 cells were reported to be very resistant to sorafenib [28]. As a result, we could not elucidate the potential interactions between HCV core protein and other HCV components. We only used HCV core protein of HCV genotype Ib in this study because genotype Ib is the most common HCV genotype in Taiwan, which could be identified in up to 77% of HCV infected patients [29, 30]. Other genotypes of HCV may exhibit activity in regulating VEGF expression in HCC cells [8]. In addition, only HuH7 cell lines were examined in this study; whether the finding of the current study could be extended to other HCC cells remains to be proven. However, we had two independent stable clones confirming the findings that HCV core protein increased the proangiogenic activity of HCC cells.

Sorafenib, the current standard first-line therapeutic agent for advanced HCC, exhibits antiangiogenic activity. A subgroup analysis of a phase III trial revealed that sorafenib has higher efficacy in patients with HCV infection than in those with other HCC etiologies [31]. A recent meta-analysis based on 4 phase III clinical trials using sorafenib as the first-line therapy for advanced HCC revealed that HCV-positive patients gained more survival benefits than HCV-negative patients did [32]. The finding of the current study (i.e., the HCV core protein induces the expression of VEGF and promotes the proangiogenic activity of HCC cells) cannot completely clarify why sorafenib, but not other inhibitors of VEGF receptors such as sunitinib and brivanib, confers more therapeutic efficacy in HCV-positive HCC patients than in HCV-negative HCC patients [33, 34]. The reason that HCV affects the efficacy of sorafenib more than that of other agents warrants further investigation.

The HCC cell line HuH7 was routinely maintained at our laboratory [35]. The 3 stable clones, HuH7-S2 (control), HuH7-core-high, and HuH7-core-low, were gifts kindly provided by Professor Jia-Horng Kao of National Taiwan University College of Medicine, Taipei, Taiwan. They were maintained in Dulbecco modified Eagle medium (DMEM) with 10% fetal bovine serum, 100 units/mL penicillin, 100 μg/mL streptomycin, 2 mM L-glutamine, and 25 ng/mL amphotericin B. For evaluating angiogenesis, human umbilical vein endothelial cells (HUVECs) were purchased from the Food Industry Research and Development Institute, Taiwan. They were maintained in an endothelial cell medium (ScienCell, Carlsbad, CA, USA). All cells were incubated at 37°C in a humidified incubator with 5% CO2.

Conditioned media were collected after the culturing of the HuH7-S2, HuH7-core-high, and HuH7-core-low cells in serum-free DMEM at a density of 5×106 cells per 75T flask for 18 hours. The media were concentrated to 250 μL by using Amicon Ultra (Millipore, Billerica, MA, USA). Next, 600 μL of Matrigel was mixed with 90 μL of 1000 U/mL heparin and 45ng of recombinant mouse VEGF (positive control) (R&D, Minneapolis, MN, USA) or 100 μL of concentrated culture medium. The total volumes were equalized to 900 μL by adding DMEM. Matrigel plugs containing DMEM and heparin were only negative controls. The products were injected into the subcutaneous tissues of the abdomen of 5-week-old nude mice. After 7 days, the mice were sacrificed. The Matrigel plugs were homogenized and centrifuged. Next, 50 μL of the supernatant was mixed with 950 μL of Drabkin reagent, and the absorbance of the resultant solution at 540 nm was examined for hemoglobin content after 30 minutes. For validating the effects of VEGF, bevacizumab or control IgG1 was mixed with Matrigel to a final concentration of 1 mg/mL. Human VEGF (R&D) was used as a positive control instead because bevacizumab could not inhibit mouse VEGF. All animal experiments complied with the National Institutes of Health guide for the care and use of laboratory animals.

We performed quantitative reverse transcription PCR analysis according to the standard protocol by using SYBR Green (Roche, Mannheim, Germany). Glyceraldehyde-3-phosphate dehydrogenase (GAPDH) was used as the internal control. The sequences of primers are listed in the Supplementary Methods.

After chromatin and protein were cross-linked, cells were lysed and harvested. We used sonication to shear DNA to fragments with approximately 500 base pairs. The protocols of the EZChIP kit (EMD Millipore) were closely followed. Mouse IgG (negative control) or antibodies against p-c-jun (Ser73) (Cell Signaling) were added for incubation overnight at 4°C. Protein G agarose was utilized to capture the antibody-protein-DNA complexes. After washing and reverse the crosslink, DNA was purified using a DNA purification kit (Qiagen). We then used quantitative PCR similar to the aforementioned methods to measure the DNA content. The sequences of the used primers are listed in the Supplementary Methods.

Cells were seeded in 6-well plates at a density of 1.5×105 cells. After 1:200 dilution of DharmaFECT 4 transfection reagent (GE Dharmacon, Lafayette, CO, USA) with culture medium, scrambled siRNA or siRNA against c-jun was added to the final concentration of 100nM. The cells were incubated with the mixture at 37°C.

Patients with an advanced HCC diagnosis from 2001 to 2011 with available tumor tissues obtained upon the diagnosis of advanced HCC at National Taiwan University Hospital (NTUH) were enrolled in this study. Patients with either HBV or HCV infection were included, whereas those with both HBV and HCV infection were excluded. The medical records of each patient were reviewed for confirming the tumor staging and history of hepatitis infection. This study was approved by the Research Ethical Committee of NTUH.

Tissue sections (thickness, 5 μm) were cut from formalin-fixed paraffin-embedded tissue blocks of tumors. Tissue sections were deparaffinized and autoclaved for 10 minutes in citrate buffer (pH 6.0) for antigen retrieval. The sections were incubated overnight at 4°C with primary antibodies against VEGF (1:2000, Santa Cruz, Santa Cruz, CA, USA) or p-c-jun (Ser63) (1:100, Cell Signaling). Signals were produced using appropriate secondary antibodies, followed by a horseradish peroxidase-labeled complex (Biocare Medical Starr trek HRP Universal Kit, Biocare, Taoyuan, Taiwan, R.O.C.) and a diaminobenzidine substrate. All slides were counterstained with hematoxylin and blindly reviewed by a single pathologist (M-S. Hsieh). Appropriate positive controls were stained simultaneously to ensure staining quality. We used two methods to assess VEGF staining. First, we analyzed it according to the staining intensity as strong or weak. Then the results of VEGF staining were assessed using the H score system. The H scores were calculated as the intensity (0, 1, 2, or 3) was multiplied by percentages of positively staining cells. High p-c-jun nuclear localization was defined as more than 50% of tumor cells with nuclear p-c-jun expression.