Multiple sclerosis (MS) is a organ-specific autoimmune disease, which characterized by chronic inflammatory demylination of certral nervous system (CNS) [1]. But, due to lack of sensitive biomarker and limited understanding of its pathogenesis, it is difficult to effectively diagnose or treat MS [2]. CD4+ T-cell mediated autoimmunity against a putative myelin autoantigen has long been recognized as a essential aspects of MS pathogenesis [3]. The number of interleukin 17-producing T helper (Th17) cells was proved to be pivotal and made a great contribution to protection against microbial pathogens in the development of MS and the animal model of MS, experimental autoimmune encephalomyelitis (EAE) [4, 5]. Recent evidence indicates that suppression of Th17 differentiation in vivo could ameliorate EAE [6, 7]. More imorptantly, Th17 cells have been found significantly upregulated in lesions of CNS from ptients with MS [8]. However, the understanding concerning underlying mechanisms of T-cell polarization into Th 17 subtypes in the development of MS is still at its early stage.

B7 homologue 1 (B7-H1) also known as programmed death ligand-1 (PD-L1) is a member of the B7 family. B7-H1 could suppresses T-cell immune activity and restricts tumor cell killing by binding to its receptor PD-1 [9]. B7-H1 expression on tumor cells was proved to significantly correlate with poor prognosis in multiple types of cancers [10-12]. Thus, B7-H1 were frequently use as a target in immune checkpoint blockade [13, 14]. In addition, the engagement of B7-H1 with PD-1 could suppress the proliferation of autoreactive T cell and inhibit secretion of inflammatrory cytokine in EAE [15]. Howerver, the therapeutic potential of B7-H1 for MS and the precise mechamism are still largely unknown.

Expression of Th1 and Th17 cells during EAE development 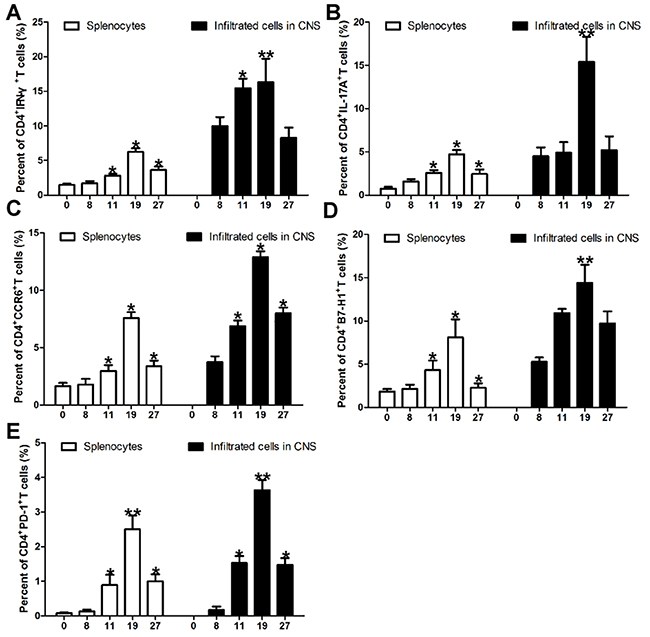 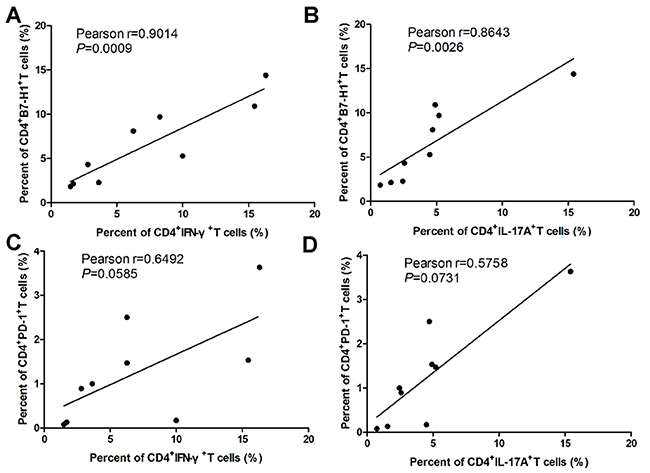 Regulation of EAE development by B7-H1 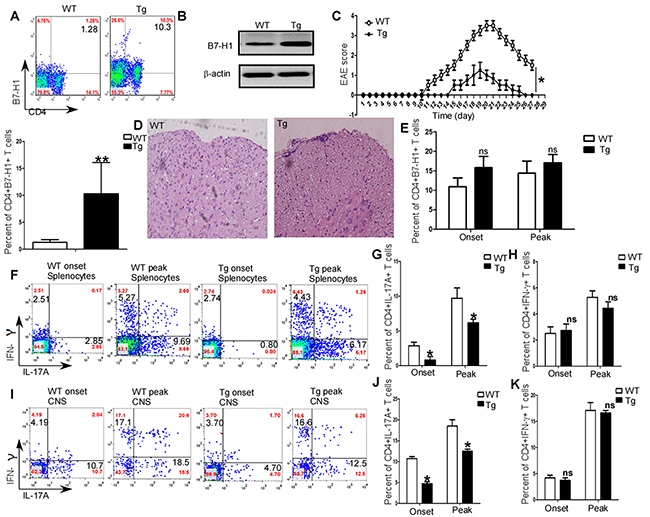 Inhibition of Th17 differentiation by B7-H1 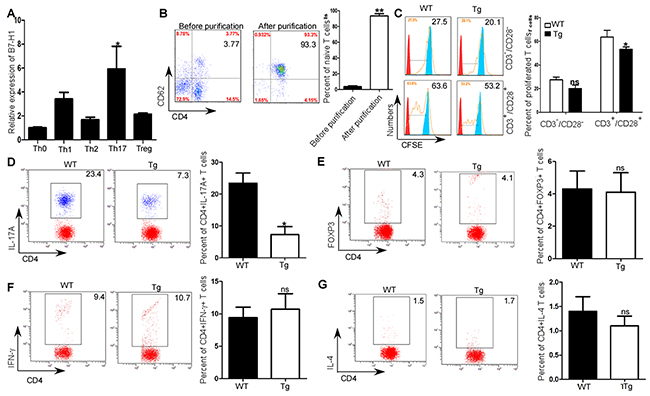 It had been provided substantial evidence that Th17 cells had significant role in MS. Up-regulation of Th17 cells and IL-17A was observerd in the CNS of MS patients, especially in chronic active lesions and acute lesions [16, 17]. More importantly, inhibition of Th17 cell differentiation could significantly ameliorated MOG (35-55)-induced EAE [18, 19]. For example, CD226 pAb administration was found to reduced onset of EAE by inhibiting Th1/Th17 production [20]. Furthermore, huma truncate IL12rβ1-Fc fusion protein could ameliorate EAE and suppress demyelination in CNS by reducing production of Th1 and Th17-polarized proinflammatory cytokines [21]. And betulinic acid derivative, SH479, was found to have inhibitory effect on Th17 differentation, thus could ameliorate clinical and histological signs of EAE. In our study, we found CD4+T cells specific B7-H1 could significantly inhibit Th17 differentiation in vivo and in vitro. In addition, compare with B7-H1 WT mice, B7-H1 trasgenic mice developed mild EAE symptoms and had fewer Th17 cells infiltrated in CNS and spinal cord. Our study provides new evidence to the relationships between Th17 cell differentiation and EAE onset and development. Furthermore, we also found the expression of CD4+T cells specific B7-H1 was also positively correlated with Th1 production in vivo during EAE development, but CD4+T cells specific B7-H1 had little effects on Th1 differentiation in vitro. And, the prudction of Th1 cells in B7-H1 transgenic mice was the almost the same as WT mice. The different signaling pathway to regulate Th1 and Th17 differentiation should account for this discrepancy, more specific underlying mechanism needed further investigated.

B7-H1 had been proven to be a key regulator of maintenance of immune tolerance, and the function of B7-H1 on atigen-presenting cells (APCs) in MS and EAE has been well established [22]. B7-H1 konckout mice displayed an significantly exacerbated EAE severity and accelerated disease onset [23]. B7-H1 was also found significantly up-regulated in lesions of MS, which colocalized with microglia/macrophage cell markers or astrocyte [23, 24]. Moreover, glial cells which expressed sufficient and functional B7-H1 could inhibit CD8+T cell response effectively [24]. B7-H1 expression on B cells and monocytes were significantly augmented in stable MS patients, and B7-H1 expression on immune cells was reduced in treated MS patients [25]. However, the association of CD4+T cells specific B7-H1 and MS development was not fully investigated. A recent published study indicate that B7-H1 ablation on MOG-specific CD4+T cell significantly amplified proinflammatory and lytic effector functions, such as IFN-γand granzyme A and B production, but Th 17 response remained unchanged between B7-H1 KO T cells and B7-H1 WT T cells [26]. In contrast these findings, we found upregulation of CD4+T cells specific B7-H1 could significantly selectively inhibit Th17 differentiation during EAE development but had little effects on Th1 differentiation, which was in line with a study which argued B7-H1 fusion protein could slectively controlled Th17 cells differentiation, but not Th1 and Th2 [27]. The discrepancy among our study and previous studies maybe due to the difference of animal model or research strategy.

In conclusion, we demonstrated that the expression of B7-H1 on CD4+T cells was up-regulated as the EAE clinical scores increased and down-regulated when EAE symptoms relieved, which indicated B7-H1 palys an important role in mediating clinical symptomos and maintaing the pathological process of EAE. In addtion, we found B7-H1 transgenic mice developed a modest EAE symptoms and had fewer Th17 cells infiltrated in CNS than B7-H1 WT mice. More importantly, we revealed B7-H1 could selectively inhibit proliferation and Th17 differentiation of CD4+T cells in vitro. Our results indicate B7-H1 could be pivital inhibitor of T-cell mediated autoimmunity in MS and a promosing therapeutic target for MS.

The encephalitogenic peptide MOG (35-55)(MEVGWYRSPFSRVVHLYRNGK) (GLBiochem) used to induce EAE had a purity of 95%. Female B7-H1 WT or transgenic mice 6-8 weeks of age were injected subcutaneously with 200μg MOG (35-55) and complete freund’s adjuvant (CFA) containing 200μg of H37RA (BD Bioscience) in the posterior right and left flank. Pertussis toxin (Calbiochem) in PBS was injected intraperitoneally on day 0 and day 2. The mice were assigned a scores of EAE on a scale of 0-5 as follows [34]: 0. normal; 1. Paralyzed tail; 2. Moderate hind-limb weakness or mild ataxia;3. Severe hind-limb weakness;4.paraplegia with weakness or paralysis;5. Moribund state or death.

Cells obtained from splenocytes or CNS infiltrateds of mice with EAE were restimulated with PMA (50ng/mL, Sigma), ionomycin (750ng/mL, Sigma) and brefeldin A (BD Biosciences). Cells were then stained with FITC-anti-CD4 at 4°C for 30min. After surface staining, cells were resuspended in Fixation/permeabilization sulution (Cytofix/cytoperm kit; BD Bioscience) and incubated at romm tempeature for 20min. Then cells were staned with PE-anti-IL-17A and APC-anti-IFN-γ at 4°C for 30min. FACS Calibur was used for flow cytometry analysis.