The mechanistic target of the rapamycin (mTOR) pathway is frequently activated in human cancers. Our objective was to evaluate relationships between mTOR-pathway activity and functional mutations in the upstream genes PIK3CA and PTEN in solid-tumor biopsies from a broad selection of cancer types.

Formalin-fixed paraffin-embedded (FFPE) tumor samples were analyzed by immunohistochemistry (IHC) and next-generation sequencing (NGS). TOR-pathway activation was identified by expression (by IHC) of the downstream effector p-4E-BP1. Activating PIK3CA mutations and null PTEN mutations were identified by NGS, and for PTEN, confirmed by IHC.

The mechanistic target of the rapamycin (mTOR) pathway is frequently activated in human cancers [1, 2]. The mTOR pathway acts as a sensor of the availability of metabolites and amino acids, and it regulates a wide range of cellular functions including cell growth, proliferation, and metabolism [1-3]. The protein 4E-BP1 (coded by EIF4EBP1 gene) is a downstream effector of the mTOR pathway [1-4]. Protein synthesis is controlled by mTOR through direct phosphorylation of 4E-BP1 to p4E-BP1, and once phosphorylated, p4E-BP1 can no longer bind to eIF4F, a translation initiation factor. The 4E-BP1/eIF4E-BP1 complex regulates cell growth and proliferation, and p4E-BP1 was shown to be a prognostic marker in grade II-IV astroglial FFPE tumor samples obtained from 111 patients [5]. Indeed, high expression of p4E-BP1 has been associated with mTOR-pathway activation and cancer [1, 5-9].

The oncogene PIK3CA coding for the phosphatidylinositol 3-kinase (PI3K) p110α subunit and the tumor suppressor gene PTEN coding for the Phosphatase and Tensin Homolog lie upstream of the mTOR pathway. Activating mutations in PIK3CA or null mutations in PTEN and its loss of expression can lead to mTOR-pathway activation [1, 3, 10-12]. Certain inhibitors of mTOR and PI3K have been approved for the treatment of some types of cancer, and these and other inhibitors of mTOR and PI3K are under investigation in a variety of cancer settings [12-18]. Hence, stratification of tumor types by PIK3CA or PTEN mutations or expression, in combination with the mTOR activity status, could provide additional information concerning disease prognosis as well as potential sensitivity or resistance to cancer treatments.

The objective of this study was to evaluate the relationships between mTOR activity and the mutation status of the PIK3CA and PTEN genes. We conducted a prospective analysis of solid-tumor biopsies from a broad selection of cancer types. The activation of the mTOR pathway was determined by positive IHC-staining for p-4E-BP1. Activating mutations in PIK3CA and null mutations in PTEN were identified by NGS. Null mutations of PTEN (which could also have included potential epigenetic silencing) were confirmed by assessing loss of expression using IHC.

Table 1: Characterization of tumor biopsies by mTOR pathway activation and the presence of PIK3CA and PTEN functional mutations

This study found that a majority of solid tumors from a diverse range of cancer types display a potential aberrant activation of the mTOR pathway, and a minority of solid tumors contain functional mutations in the PIK3CA and PTEN genes (including for PTEN, a loss of expression also potentially related to epigenetic-silencing).

Although no overall association was identified between the activation of the mTOR pathway and the presence of functional mutations in the PIK3CA and PTEN genes, this may have been a reflection of differences between different cancer types within the limited sizes of those sample populations. Within particular categories and for particular cancer types, potential associations were identified. The combination of PIK3CA activating mutation and PTEN loss of function was associated with mTOR-pathway activation, most notably in the breast-cancer samples. This particular combination has been associated with poor outcomes to treatment with HER2/neu receptor inhibitor (trastuzumab) or PI3K inhibitor (BYL719) in breast cancer [19, 20]. Conversely, in the colorectal-cancer samples the PIK3CA activating mutation was more frequently associated low mTOR activity. Although the clinical relevance of this combination remains to be clarified in colorectal cancer, in ER+/HER2- breast cancer, the PIK3CA activating mutation/low mTORC1 signaling was associated with better clinical outcomes to adjuvant ER-modulator (tamoxifen) treatment [21].

Our results suggest that stratification of tumors using the combination of mTOR-pathway biomarkers (and combined NGS and IHC technologies in their assessment) is potentially more informative than using a single biomarker. Although in our study there was no information regarding treatment follow-up and none of the patients from whom we obtained samples had participated in clinical trials evaluating inhibitor PIK3CA or mTOR inhibitors, this form of tumor analysis could support stratification in a prospective clinical trial evaluating the clinical benefit of (dual) PIK3CA/mTOR treatments in comparison with current standard treatments. For example, in a diverse range of tumors, the PIK3CA H1047R mutation was suggested to be associated with a favorable clinical response to PI3K/AKT/mTOR inhibitors [17]. By contrast, only a minimal association was suggested between PIK3CA and clinical outcome in a retrospective analysis of breast-cancer samples from the BOLERO2 clinical trial [22].

Indeed, using a single biomarker is perhaps not the best study design. Our results obtained from the breast cancer samples, for example, suggest that stratification could be used to increase the toxicity-benefit cost of a treatment such as everolimus, where there is a clear need for clinical trials with improved sub-group analyses [23]. Also, the TAMRAD study provided preliminary evidence for an mTORC1 activation marker as a predictive factor for everolimus efficacy (time-to-progression) in advanced breast cancer [24]. These exploratory results suggest that everolimus efficacy might be positively correlated with late effectors of mTORC1 activation, Akt-independent mTORC1 activation, and inversely correlated with the PI3K/Akt/mTOR pathway. They also found that subgroups most likely to exhibit improved TTP with tamoxifen/everolimus therapy, compared with tamoxifen alone, were patients with high p4EBP1, low 4EBP1, low liver kinase B1, low pAkt, and low PI3K.

Indeed, stratified trials are needed to develop biomarkers that can predict response to mTOR inhibition as well as other breast cancer treatments, and our results suggest that the same suggestion for future stratification in clinical trials holds for a variety of cancer types, e.g. the several tumor sample types which had mutations in both PIK3CA and PTEN genes and also displayed mTOR-pathway activation, and the higher percentages of PIK3CA mutations that were observed in colorectal-cancer samples with than without mTOR-pathway activation.

Further analyses are needed to identify other key biomarkers and, ultimately, increase the predictive capacity of the stratification.

All samples were derived from metastatic cancers from patients undergoing routine systemic therapies. Each sample was obtained as a FFPE block and satisfied the pathology entry criteria: tumor cellularity >10%; tumor section ≥4 mm2 with no necrosis and ≤20% lymphocyte infiltration. Tumors were macrodissected to remove contaminating normal tissue. Each patient provided informed consent for tumor-analysis data to be published.

Sample preparation and sequencing was performed using an ISO15189-accredited process by OncoDNA, Gosselies, Belgium. Briefly, DNA was extracted from FFPE tissue using the Qiagen DNA FFPE Tissue Kit or Qiagen DNA Blood Mini Kit (Qiagen, Valencia, CA, USA). DNA quantity was measured using the Qubit 2.0 Fluorometer (Thermo Fisher Scientific, Waltham, MA, USA). A sequence library for a given sample was generated using the Ion AmpliSeq Library kit 2.0 (Thermo Fisher Scientific, Waltham MA, USA) in accordance with the manufacturer’s instructions. A library was prepared from 10 ng or 50 ng DNA and the OncoDEEP primer panel or OncoDEEP Clinical primer panel, respectively (designed to amplify either 207 or >16452 amplicons covering either hotspot mutations or whole exons, respectively). The primers used in the amplification were partially digested by Pfu enzyme. The product of digestion was then ligated with corresponding barcoded adapters and purified using Ampure Beads (Beckman Coulter, Inc., Indianapolis, IN, USA). This purified product was amplified for 5 further cycles and re-purified using Ampure Beads to generate the library sample. The IonChef system (Thermo Fisher Scientific, Waltham, MA, USA) for emulsion PCR and chip loading was performed with 10 pmol library DNA per sample. The average coverage was set at 1000⊆ to be able to detect a minor allele frequency ≥5%. The Ion PGM, the Ion Proton or the 5XL system was used in accordance with the required throughput.

Each slide was scored by two independent analysts who were blinded to the sample’s description and to the other analyst’s score of the slide. A consensus H-score (to define positive expression) was calculated in accordance with a predefined ISO15189-accredited method. Representative slides showing PTEN positive, PTEN negative, p4e-BP1 low, and p4E-BP1 high are shown in Figure 1. A positive stain was defined as an H-Score>100 (p-4E-BP1) and H-Score>10 (PTEN), in accordance with the following formulae:

where, %C, %Cy and %N are percentages of stained cells, cytoplasm and nuclei, respectively; and 1+, 2+ and 3+ indicate the staining intensities, low, moderate, and high, respectively. 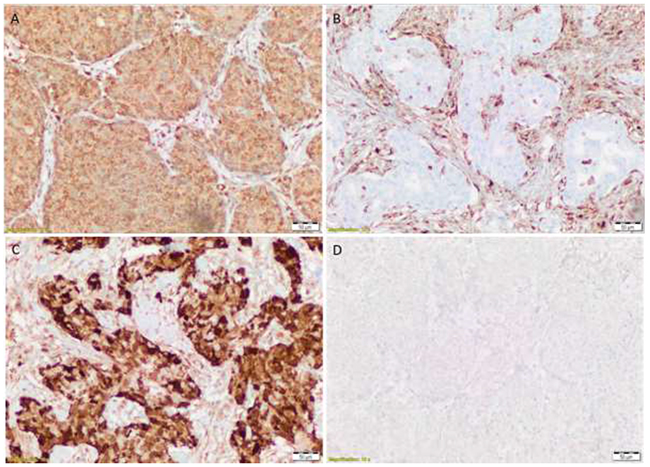 The χ2 test was used to evaluate the relationship between mTOR-pathway activation and PIK3CA and PTEN genotypes. No corrections were made with respect to multiple comparisons.

We thank all the clinicians and patients who provided the biopsy samples used in the study. Matthew Morgan PhD (MG Science Communications, Belgium) provided scientific-writing services in the development of the manuscript.

This study was sponsored by OncoDNA SA. The costs associated with the development and publishing of the manuscript, including scientific-writing assistance, were provided by OncoDNA SA.