Cervical cancer is one of the most common gynecologic tumors and accounts for large percentage of tumor associated death worldwide [1, 2]. Every year, there are hundreds or thousands of new cervical cancer patients reported in developing country or developed country [3]. Presently, although various methods have attempted for the treatment of cervical cancer, including surgery, radiotherapy and chemotherapy, the high lymphatic metastasis and distant metastases still induce the poor prognosis and low survival rate [4]. It must be admitted that multifarious molecular and pathways are involved in the carcinogenesis of cervical cancer, such as regulating proteins and non-coding RNAs (ncRNAs). In spite of this, the underlying functional molecular and regulation mechanisms in cervical cancer tumorigenesis are still unclear and need to be fully identified [5].

Circular RNAs (circRNAs) is an emerging type of ncRNAs without protein translation capacity [6–8]. CircRNAs is characterized by covalently closed loops without 3’- and 5’- end, which is absolutely different from linear RNA [9]. Compared to microRNAs (miRNAs) and long non-coding RNAs (lncRNAs), circRNAs have more stable construction and sequence conservation to resist the digestion of enzyme. Thus, circRNAs could much easier to be accumulated in cytoplasm or interstitial fluid, presenting higher concentration than corresponding linear RNAs. Increasing evidences have indicated that circRNAs take part in the regulation of tumorigenesis, including genesis, differentiation, migration and metastasis [10]. For instance, in hepatocellular carcinoma, ciRS-7 is significantly correlated with the clinicopathological characteristics of HCC patients and acts as an independent risk factor of hepatic microvascular invasion [11]. Besides, due to the stable expression and abundance, circRNAs could also act as valuable diagnostic marker for cancer detection. For instance, hsa_circ_0005075, a new identified circRNA, is involved in the progression of hepatocellular carcinoma and could act as a diagnostic marker [12].

MicroRNAs (miRNAs) are a kind of noncoding RNA with about 18-22 nucleotides. Usually, miRNAs participate in post-transcriptional regulation by targeting the 3’-UTR region of target genes. Plentiful researches have revealed the important role of miRNAs in various diseases. In cervical cancer, hundreds of miRNAs have been testified to regulate the proliferation, migration, invasion, and apoptosis. MiR-497 has been identified as tumor suppressor and inhibits the proliferation, migration and invasion of retinoblastoma, cervical cancer cells [13, 14]. 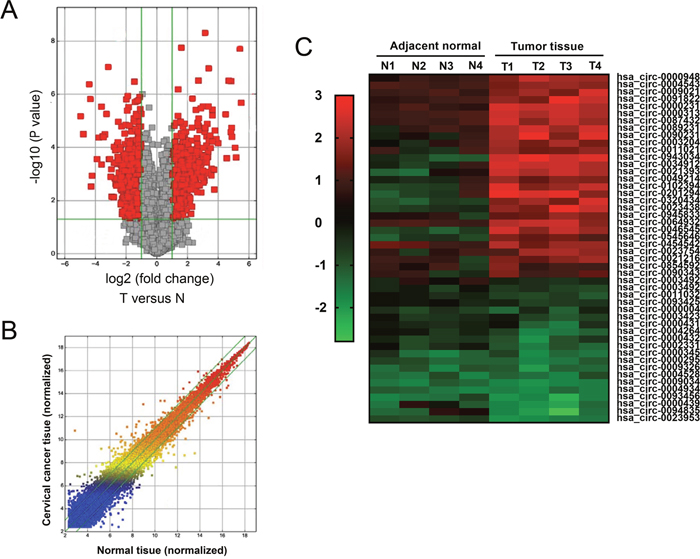 Hsa_circ_0018289 was up-regulated in cervical cancer tissue and cells 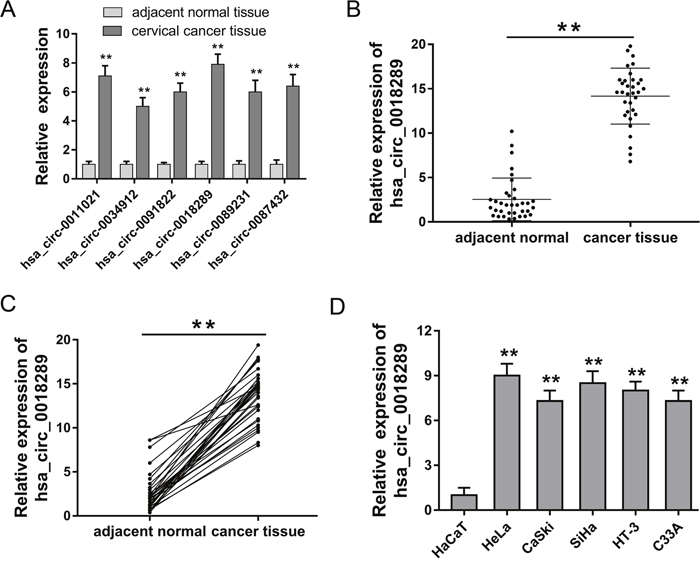 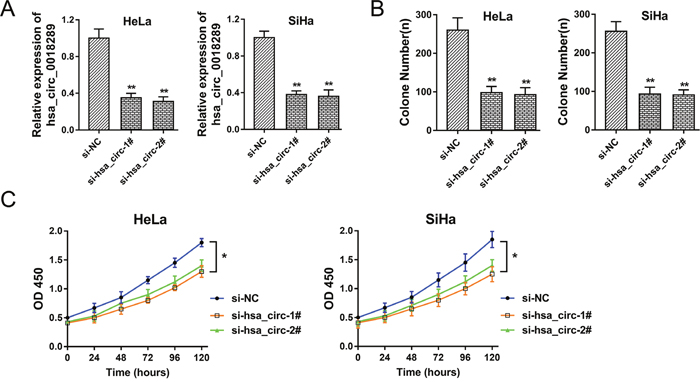 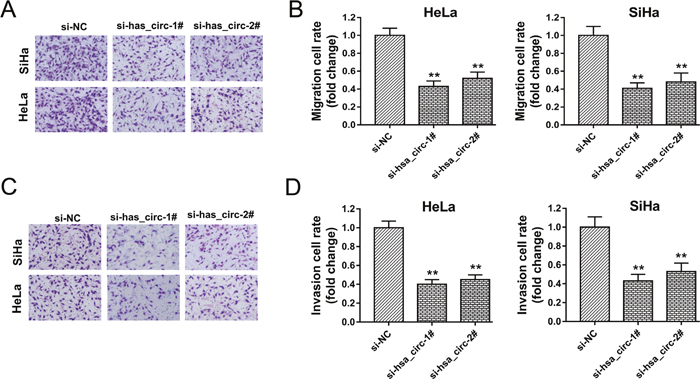 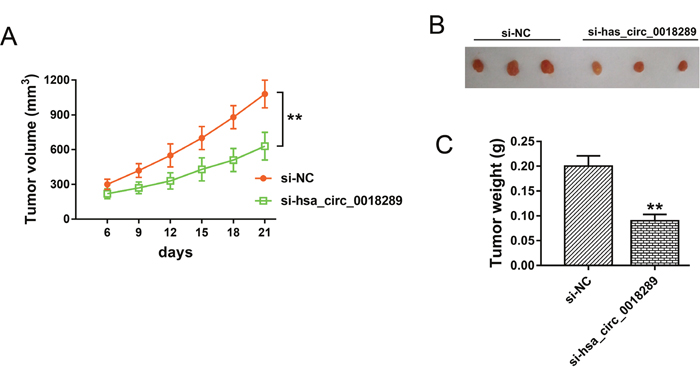 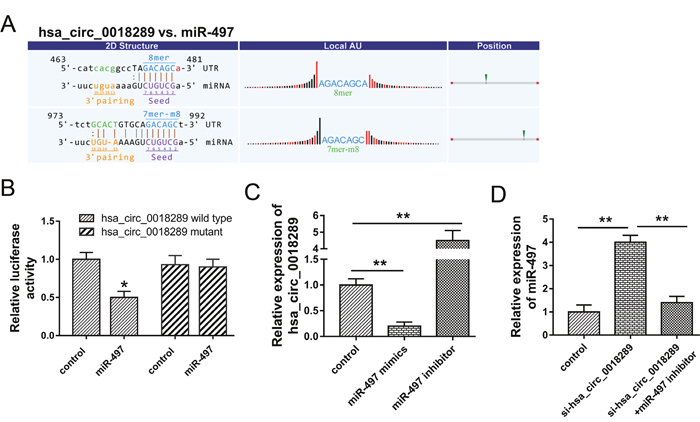 Presently, the role and mechanism of circRNAs in tumor progression are still not well identified [15]. Although circRNAs have been discovered for decades, the significance of circRNAs is recognized with the developing of high-throughput RNA-sequencing (RNA-Seq) and bioinformatics analysis [16, 17]. Emerging evidences have illustrated that circRNAs play important role in multiple physiological and pathological functions, involving cardiovascular system disease, nervous system disease and series of tumors [18–20]. Up to now, this is the first time to screen the circRNAs expression profiles in cervical cancer tissue, providing a vital insight for the regulation of circRNAs on cervical cancer genesis.

CircRNAs are a type of non-protein coding RNAs consisting of a circular loop with multiple miRNA binding sites, being called as miRNA response elements (MREs) and functioning as miRNA sponges. Until now, the major canonical function of circRNAs is miRNAs ‘sponge’, as well as lncRNAs. Because circRNAs have a specific covalently closed circular construction, it might harbor numerous miRNAs binding sites, acting as a huge ‘sponge’ to consume target miRNAs. For example, CDR1as (ciRS-7) comes from “circular RNA sponge for miR-7” with near 70 miR-7 binding site in the loop [25]. Moreover, in oral squamous cell carcinomas, circRNA_100290 regulate CDK6 expression through sponging miR-29b family members [26]. In present study, hsa_circ_0018289 was observed to directly bind to miR-497, which was validated by luciferase reporter assays. Although the further functional experiments are absent, the interaction within hsa_circ_0018289 and miR-497 could indicate the sponge role of hsa_circ_0018289 to miR-497.

Another important role of circRNAs is to act as biomarker for early detection in series of tumors. Due to the conservative covalently closed circular structure, circRNAs could resist the digestion of RNA enzyme, making its enrichment in peripheral blood or body fluid. For instance, the aberrant expression of hsa_circRNA_103636 in peripheral blood mononuclear cells is tested to be a potential novel biomarker for the diagnosis and treatment of major depressive disorder [27]. For cervical cancer, hsa_circ_0018289 is significantly up-regulated in tumor tissue and cells, providing a potential biomarker for cervical cancer patients’ early detection.

Cell count kit-8 (CCK-8, Dojindo, Japan) was used to detect cell proliferation. Briefly, 3×104 cervical cancer cells (HeLa and SiHa) were seeded into 96-well plates and 10 μl CCK-8 solution was added to each well. Then, the cells were incubated at 37°C for 90 minutes. At the indicated time points, the absorbance at 450 nm was measured using a spectrophotometer. The data are representative of three individual experiments carried out in triplicate.

Transwell assay was performed for cervical cells (HeLa and SiHa) migration and invasion. In briefly, the inserts were coated with 50 μL Matrigel (BD Biosciences, Franklin Lakes, NJ, USA). Cells (5×104) were suspended in 100 μl serum-free medium and then seeded on the upper floor of Transwell chambers (BD Biosciences, Franklin Lakes, NJ, USA). The lower chamber was added 500 μl serum with 20% FBS. After 48 h of incubating at 37°C with 5% CO2, the un-invaded cells were wiped with a cotton swab, and invaded cells were fixed in methanol and stained with 0.1% crystal violet. The number was counted under microscope. Each experiment was performed in triplicate.

The circRNA-miRNA interaction was predicted using Arraystar’s home-made miRNA target prediction software based on TargetScan and miRanda. For luciferase reporter assay, hsa_circ_0018289 cDNA was amplified and cloned into the downstream of the firefly luciferase gene pGL3 (Invitrogen, Carlsbad, Calif, USA). Then, HEK293T cells were co-transfected with wild type vector (150 ng) or mutant vector (150 ng). Besides, miR-497 mimics or miR-NC (2 ng) were also transfected into HEK293T cells using Lipofectamie 2000 (Invitrogen). After 48 h of transfection, the luciferase activities were detected using dual-luciferase reporter assay kit (Promega) normalized to Renilla luciferase activity. All the experiments were performed in triplicate.

The xenograft mouse models were performed in nude mouse to determine the tumorigenicity. The animal assay was approved by the Institutional Committee of Cangzhou Central Hospital and Zibo Central Hospital and carried out based on the Institutional Animal Care and Use Committee’s guidelines. Male BALB/c nude mice (6 weeks) were purchased from Slac Laboratory Animal Center (Shanghai, China) and maintained under specific pathogen-free conditions. HeLa cells (5×106 cells in 100 μl) transfected with si-hsa_circhsa_circ_0018289 were subcutaneously injected into the back of nude mice. The tumour size was measured every 3 days. At indicated times, the mice were sacrificed and tumor weight were measured.

Yu-Jin Dong and Bo Xu conceived and designed the whole experiments and manuscript. Ya-Li Gao and Zi-Shen Zhao performed the major work of the assay. Ming-Yun Zhang and Li-Jie Han collected and analyzed the data.

This work was supported by Central Laboratory of Zibo Central Hospital and Basic Medical Research Center of Shangdong University. The funding was supported by National Natural Science Foundation of China (812084129).