Head and neck squamous cell carcinoma (HNSCC) accounts for about 6% of all human cancers, with about 650,000 new cases reported and 350,000 HNSCC-related deaths per year worldwide [1]. Tobacco, alcohol consumption and human papillomavirus (HPV) infection are the main etiological factors [2–4]. The biological behavior, prognosis and genetic landscape are significantly different between HPV-positive and HPV-negative HNSCC patients, and many studies have found that HPV-positive HNSCC patients have better prognosis, with increased survival time and less chance of recurrence [5–8].

FcGBP protein was originally isolated from the small intestine that bound the Fc portion of immunoglobulin [9–12]. FcGBP is a ~300 kDa protein with multiple Von Wille-brand factors and mucin-like repeats [11]. FcGBP has been reported to be downregulated in ulcerative colitis, which is a chronic inflammatory disease predisposing to colorectal cancer (CRC) [13, 14]. FcGBP may play an important role in anti-inflammation and cell protection in epithelium cells [15]. The mutation of FcGBP has been previously identified in CRC [16]. Furthermore, FcGBP was significantly enriched in the function of cell adhesion. Metastasis is facilitated by the cell-cell interactions between the endothelium and tumor cells in targeted organs. Cell adhesion occurring in vasculature of specific organs is an essential step in cancer metastasis [17]. 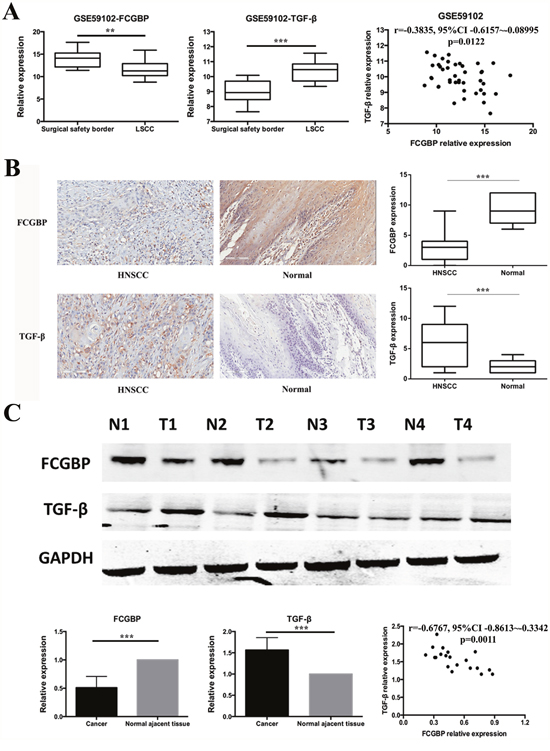 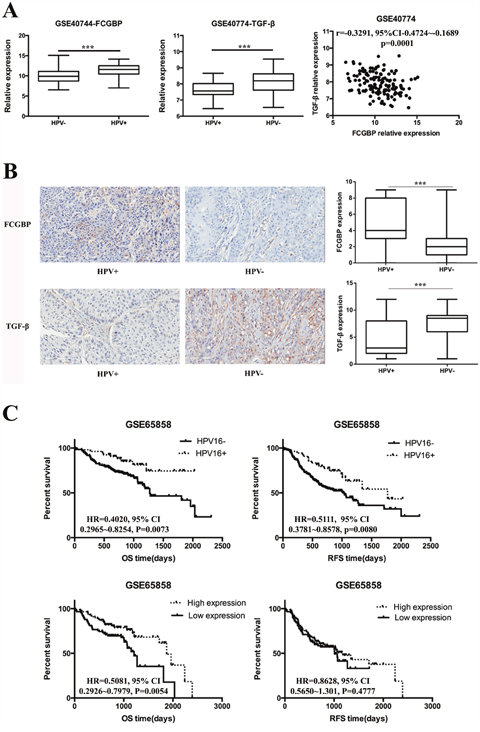 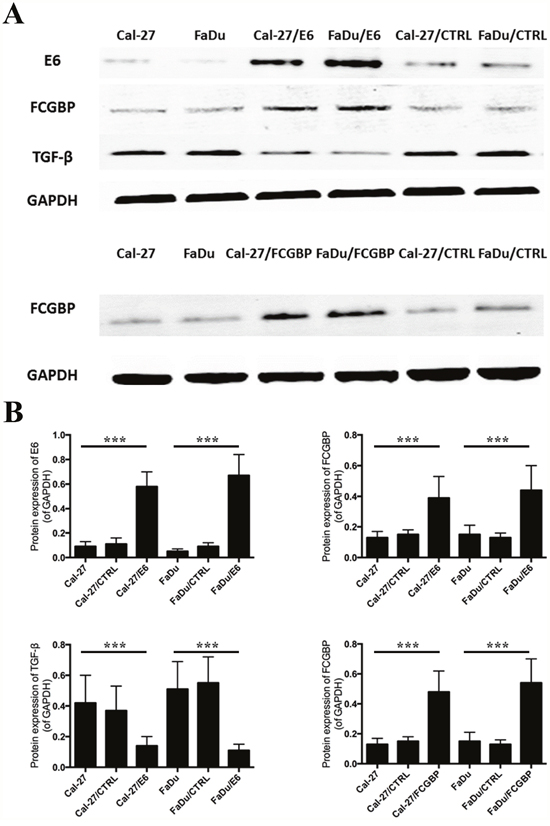 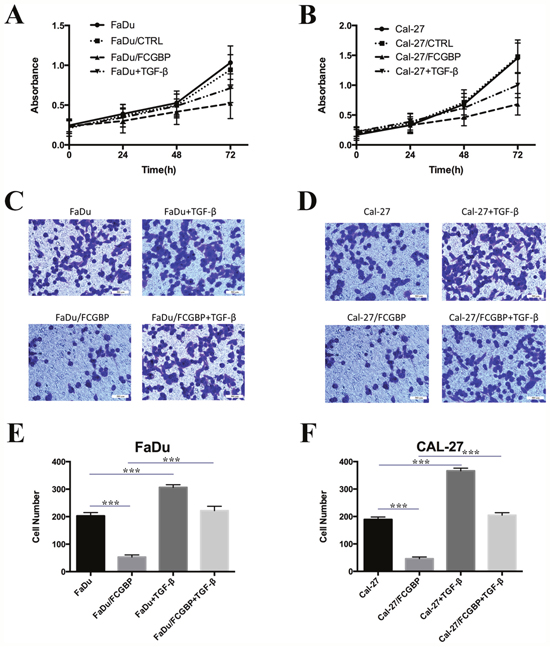 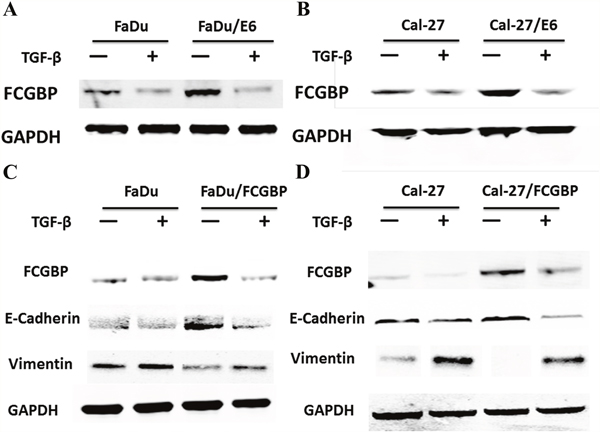 Head and neck squamous cell carcinoma (HNSCC) accounts for ~6% of all human cancers, with ~650,000 new cases reported and 350,000 HNSCC-related deaths per year worldwide. Although the treatment has been technically and medically improved during the last decades, the 5-year overall survival (OS) rate is still stagnating at about 50% [18], local recurrence and metastasis were the main cause of death in HNSCC patients. Meanwhile, the treatment effect of many other types of tumors has been improved, the patient's survival time is prolonged, and the quality of living is improved [19–21].

FcGBP was first identified as an Fc portion of the IgG molecule binding site in intestinal and colonic epithelia, gallbladder, cystic duct, bronchus, submandibular gland, cervix uteri and in fluids secreted by these cells in humans. It might play a role in cell protection and anti-inflammation in tissues [15]. FcGBP gene expression is significantly decreased in colon cancer carcinogenesis [22]. Griffith et al. showed that FcGBP was differentially expressed in normal thyroid tissue, thyroid adenomas and thyroid carcinomas [23]. We found FcGBP gene expression was down regulated in HNSCC tissues, and correlated to OS time of HNSCC patients. The proliferation and migration capability was inhibited after FcGBP over-expression in HNSCC FaDu and Cal-27 cells.

FcGBP is composed of many repeated domains, such as thirteen Von Willebrand factor D domains, and twelve cysteine rich (Cys-rich) and twelve trypsin inhibitor-like domains. The Cys-rich domains are essential in the formation of many disulfide bridges with another molecules, plausibly resulting in a net-like scaffold within the mucosal barrier [12]. In the intestine, FcGBP protein exists in a large complex containing Muc2 and Trefoil peptide [24, 25]. These results suggest that it may be important in the maintenance of homeostasis and integrity of epithelium.

In present investigation, we found that both mRNA and protein expression level of FcGBP was negative correlated with TGF-β in HNSCC and surgical safety border tissues. Currently TGF-β is understood to act as a tumor-suppressor early in tumorigenesis, and then in later phases it enhances the malignant phenotype. Thus, the expression levels of TGF-β are usually reduced during tumorigenesis, and the expression of TGF-β is increased during malignant progression [27, 28]. TGF-β activities bifurcate to exert anti-proliferative and pro-EMT actions in HPV-transformed cells [29]. In present investigation, we found that TGF-β expression level was higher in HNSCC tissues than in normal tissues along with another reports, also we found that TGF-β gene expression was higher in HPV-negative HNSCC patients compared to HPV-positive HNSCC patients. Małgorzata et al. found that TGF-β level was lower in saliva of patients with HPV infection [30]. We found TGF-β gene expression was down regulated after HPV E6 transfection in HPV-negative HNSCC FaDu and Cal-27 cells. These results indicated that TGF-β gene expression was inhibited by HPV infection in HNSCC patients. We found TGF-β could inhibit FcGBP gene expression in vitro, and the results of GSE17708 and GSE20247 confirmed these findings. 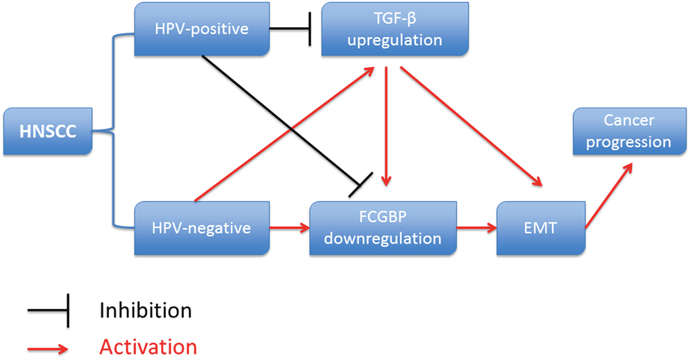 In this study, 5 HNSCC associated datasets, GSE17708, GSE20247, GSE40774, GSE59102 and GSE65858, were downloaded from GEO database, respectively. GABRP mRNA expression data was extracted and analyzed. Detailed information could be found in Table 1.

62 patients were selected to enter the study (Table 2). The diagnosis and HPV status were confirmed based on clinical, and histopathological or cytological examination. This study was approved by the ethics committee of The Sixth Affiliated Hospital, Wenzhou medical University, and all specimens were collected from patients provided written informed consent in accordance with the principles of the Declaration of Helsinki and Good Clinical Practice Guidelines.

Immunohistochemical staining and evaluation of results

HPV E6 cDNA was cloned into plasmid vector pcDNA3.1-EGFP. After amplification and DNA sequence confirmation, this plasmid was used to overexpress HPV E6 in HPV-negative HNSCC FaDu and Cal-27 cells. Briefly, Cells were grown and stably transfected with plasmid-E6 or plasmid-empty for control. Cells were treated with 400μg/ml neomycin/G418 for 14d after transfection, and named FaDu/E6, Cal-27/E6 or FaDu/CTRL, Cal-27/CTRL.

We use Cell Counting Kit-8 (CCK-8) to investigate the proliferation of HNSCC cell lines. Cells at logarithmic phase were seeded in 96 well plates with 1×103 cells per well for normal culture. Six double wells were set in every group, and a blank control was also used. After 24 h, 48 h and 72 h culture, 10μl of CCK-8 regent was added in each well, and incubated at 37°C for 1 hour, and absorbance value was measured at 450 nm.

Cell migration and invasion assays were performed using Transwell migration chambers according to the manufacturer's protocol. In brief, 1x104 cells were suspended in 200 μl serum-free RPMI-1640 medium. The cells were seeded in the upper chamber; the lower chamber contained RPMI-1640 medium with 10% FBS as the chemoattractant. After incubation for 48 h at 37˚C in a humidified atmosphere of 5% CO2, any cells that had not penetrated the membrane were removed using cotton swabs; the cells that had successfully migrated to the bottom surfaces of the membranes were fixed with 4% polyoxymethylene and stained with 0.1% crystal violet for 20 min. They were counted under a microscope.

All experiments were performed three times. All statistical analyses were performed using the SPSS 16.0 software. Quantitative data was expressed as means ± SD. Student's t-test was used to compare the differences of means between each two groups. One-way ANOVA was used to analyze the differences between multiple sets of data Pearson Correlation Coefficient analyzed correlation between two groups. The Kaplan-Meier method, Hazard ratios (HR), 95% confidence intervals (CI) and log-rank test were used to evaluate the correlation between FcGBP expression and patient survival. The criterion for statistical significance was established at P<0.05.

25. Johansson ME, Thomsson KA, Hansson GC. Proteomic analyses of the two mucus layers of the colon barrier reveal that their main component, the Muc2 mucin, is strongly bound to the Fcgbp protein. J Proteome Res. 2009; 8:3549-57.