Lung cancer (LC) is one of the leading diseases of human death [18]. Although the research in this area advanced rapidly in the past several decades, the pathogenesis of LC is still unclear [2]. Despite chemotherapy, radiotherapy and surgery can be used to treat LC, the therapeutic efficacy is unsatisfactory currently; the five-year survival rate of LC is less than 20% [21]. Therefore, it is urgent to invent novel and effective therapies for the treatment of LC. On the other hand, to further investigate the pathogenesis of LC can facilitate to design new and more effective approaches for the management of LC.

Fas and p53 play an important role in the regulation of apoptosis. P53 is a cancer suppressor protein; it induces cancer cell death via inducing cancer cell apoptosis. Most cancer cells express less p53 or express mutated p53 [12]. Fas is also called CD95, is one of the best studied death receptors. Fas contains a death domain and is involved in the pathogenesis of a number of cancers. To increase the expression of Fas can induce cancer cell death [10]. Yet, the remedies to regulate aberrant Fas expression are still limited.

Expression of Fas is negatively correlated with PAR2 in LCC

LCCs were isolated from surgically removed LC tissues and analyzed by RT-qPCR and Western blotting. The results showed that, as compared the marginal normal lung cells, the expression of Fas was lower (Figure 1A-1B) in LCCs, the levels of p53 was not different between the normal group and the LC group (Figure 1C, and the PAR2 expression was higher in LCCs (Figure 1D-1E). A negative correlation was detected between the expression of Fas and PAR2 in LCCs (Figure 1F). 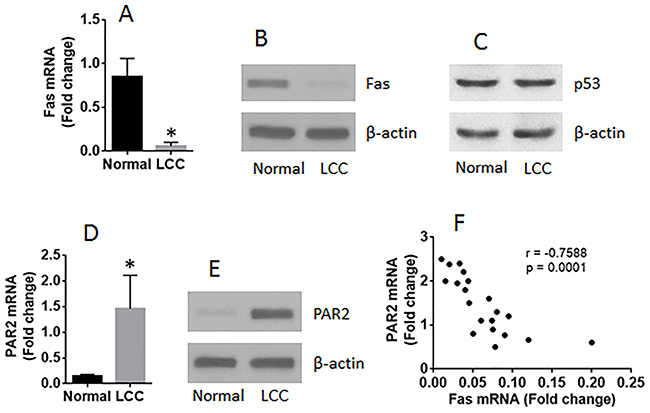 Figure 1: The expression of Fas is negatively correlated with PAR2 expression in LCCs. LCCs and normal lung cells were prepared with the surgically removed LC tissue (n=20). The LCCs were analyzed by RT-qPCR and Western blotting. The bars show the mRNA levels of Fas (A) and PAR2 (D). The immune blots show the protein levels of Fas (B), p53 (C) and PAR2 (E). (F) the dot plots show a negative correlation between Fas mRNA and PAR2 mRNA in LCCs. The data of bars are presented as mean ± SD. *p<0.01, compared with the normal group.

The data of Figure 1 imply that PAR2 may be responsible for the suppression of Fas in LCCs. To test this, the BEAS-2B cells, a normal lung epithelial cell line, were exposed to PAR2AP in the culture for 48 h. The cells were then analyzed by RT-qPCR and Western blotting. The results showed that the PAR2 activation did suppress the expression of Fas in lung epithelial cells (Figure 2).

Figure 2: PAR2 suppresses Fas expression in lung cells. (A-B), Lung epithelial cells (the BEAS-2B cell line) were cultured in the presence of PAR2 active peptide (PAR2AP) at the indicated concentrations or PAR2 control peptide (PAR2CP; 100 μM) for 48 h. The cells were analyzed by RT-qPCR and Western blotting. The bars indicate the mRNA levels and the immune blots indicate the protein levels of Fas in the normal lung cells. The data of bars are presented as mean ± SD. *p<0.01, compared with the dose “0”. The data represent 3 independent experiments. 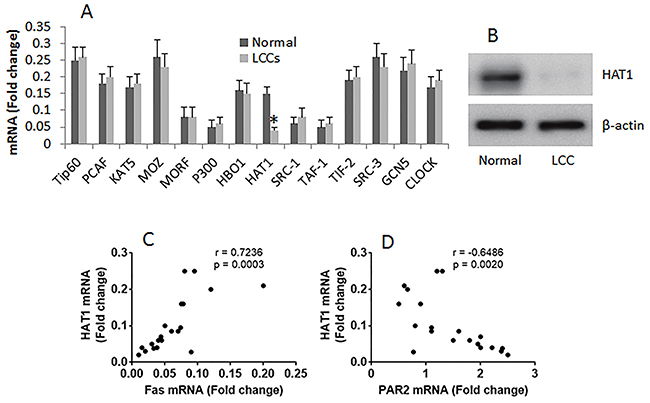 Figure 3: Correlation between HAT1/Fas and HAT1/PAR2 in LCCs. The mRNA was extracted from LCCs and normal lung cells, and analyzed by RT-qPCR. (A) the bars indicate the mRNA levels of HAT subtypes in LCCs. (B) the immune blots indicate the protein levels of HAT1. (C-D), the dot plots show the correlation between HAT1 and Fas (C), HAT1 and PAR2 (D). The data of bars are presented as mean ± SD. *p<0.01, compared with the dose “0”. The data represent 3 independent experiments. The data of Fas and PAR2 used in the correlation test are presented in Figure 1.

Figure 5: HAT1 is required in the expression of Fas in lung epithelial cells. (A-B) lung epithelial cells (the BEAS-2B cell line) were exposed to TNF (1 nM) in the culture for 48 h. The cells were analyzed by RT-qPCR and Western blotting. The bars indicate the mRNA levels (A) and the immune blots indicate the protein levels of Fas in the lung epithelial cells. TNF-a (or TNF-b): the cells were treated with HAT1 RNAi (or control RNAi) and TNF at 1 nM. (C) HEK293 cells were transfected with Fas promoter plasmids and saline, or a HAT1 luciferase reporter, or a control reporter, respectively. The cells were analyzed by luciferase assay 24 h later. The bars indicate the luciferase activities. The data of bars are presented as mean ± SD. *p<0.01, compared with the saline group. The data represent 3 independent experiments. 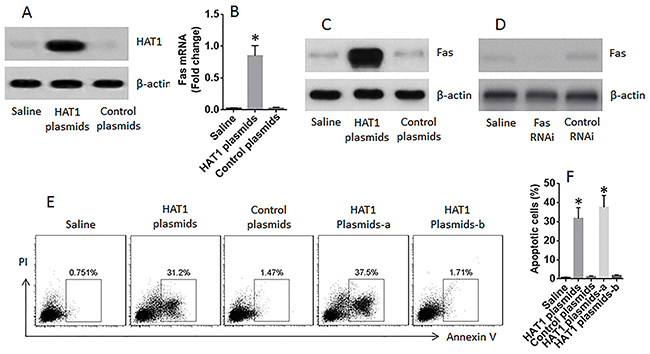 Figure 6: Restoration of HAT1 induces LCCs apoptosis. LCCs were prepared from surgically removed LC tissue. (A) the immune blots show the expression of HAT1 in LCCs after transfecting with HAT1 plasmids. (B-C) the mRNA (B) and protein (C) levels of Fas in LCCs after transfecting with HAT1 plasmids. (D) results of Fas RNAi. (E) the gated cells are apoptotic LCCs after the treatment denoted above each subpanel and the presence of FasL (1 nM). (F) the summarized data of panel E. a: the LCCs were treated with Fas RNAi; b: the LCCs were treated with control RNAi.

The data showed that the expression of HAT1 was lower in LCCs. HAT1 is one of the members of HAT. As the important factors in gene transcription, the role of HATs in the pathogenesis of cancer has been extensively studied. It is suggested that HATs drive cellular plasticity in the cell reprogramming and tumorigenesis [9]. The activities of HAT link the different factor-induced acetylation signaling in genome maintenance and cancer [7]. Previous studies found that HATs are associated with the pathogenesis of cancers; but most of them demonstrated that the expression of some members of HAT was higher in cancer cells. Such as HAT hMOF involves tumorigenesis in lung cancer by promoting S phase entry [22] and the expression of GCN5 is elevated in colon cancer cells [20]. Our data show a decrease in HAT in cancer, the levels of HAT1 were markedly lower in LCCs; this is in line with published data; Simo-Riudalbas et al reported that the expression of HAT6b was lower in non-small cell LC [16]. Thus, the expression of HAT members in cancer can be various depending on individual cancers.

Although the deregulation of Fas expression has recognized in cancers, the causative factors of Fas suppression are not fully elucidated. The data show that the activation of PAR2 suppresses expression of HAT1 in lung epithelial cells, indicating that factors activating PAR2 may suppress Fas expression and contribute to the pathogenesis of cancer. Such as mast cell activation can activate PAR2 by releasing tryptase; the latter cleaves the exterior part of PAR2 molecule and activates PAR2. Mast cells distribute extensively in the body. Multiple factors, such as allergic reactions, can activate mast cells to induce mast cells to release chemical mediators, like tryptase. Whether mast cells play a critical role in the pathogenesis via suppressing Fas expression needs to be further investigated. This inference is supported by previous studies [1]. By immunohistochemistry, Globa et al found that the intratumoral mast cell phenotype of malignant tumor was tryptase+/chymase+/CD117+, while in the peritumoral areas three different MCs phenotypes were identified: tryptase+/chymase+/CD117-, tryptase+/CD117+/chymase- and chymase+/CD117+/tryptase- [6]. Stoyanove et al found that mast cell-derived histamine promoted non-small cell LCC proliferation [17].

P53 is also a tumor suppressor. In the present study, we also observed p53 in LCCs, but the levels of p53 in LCCS were not significantly different from the normal controls. We also did not identify the correlation between p53 and HAT1 in LCCs. Thus, HAT1 may not regulate the expression of p53 in LCCs.

Surgically removed LC tissues were collected from the operation room of the Wuhan Tongji Hospital. The LC tissues were from 20 LC patients (male 10 and female 10; age: 35 to 66 years old). The diagnosis and management of LC were carried out by our surgeons and pathologists. Patients had one of the following conditions were excluded from the study: LC with metastasis; treated with anti-cancer therapy; smoking history, suffered with other immune disorders or severe organ diseases. The study plan was approved by the Human Ethics Committee of Tongji Hospital. A written informed consent was obtained from each human subject.

The LC tissues were cut into small pieces (2×2×2 mm) and incubated for 2 h in the presence of a collagenase IV (1 mg/ml) at 37 °C with mild agitation. The cells were filtered through cell strainers (100 μm first, then 40 μm). Immune cells (CD3+, CD11c/b+, CD19+, CD14+, CD68+, CD117+) were selected out by magnetic cell sorting (MACS) with commercial reagent kits following the manufacturer’s instructions. The remained cells were used as LCCs. Cells isolated from the marginal normal tissue (approved by pathology) were used as normal lung cells.

The total RNA was extracted from cells with the TRIzol reagents. The cDNA was synthesized with a reverse transcription reagent kit following the manufacturer’s instructions. The samples were amplified in a real time PCR device with the SYBR Green Master Mix in the presence of primers as indicated in Table 1. The results are presented in fold change against the internal housekeeping gene β-actin.

The total protein was extracted from cells, separated by SDS-PAGE (Sodium dodecyl sulfate polyacrylamide gel electrophoresis) and transferred onto a PVDF membrane. The membrane was blocked by incubating with 5% skim milk for 30 min, stained with the primary antibodies of interest overnight at 4 °C, washed with TBST (Tris-buffered saline Tween 20), incubated with the secondary antibodies (labeled with peroxidase) for 1 h at room temperature and washed with TBST again. The immune blots were developed by the enhanced chemiluminescence and photographed with an imaging device.

The HAT1 gene or the Fas gene was knocked down from lung epithelial cells or LCCs by RNAi with commercial reagent kits following the manufacturer’s instructions. The effects of RNAi were assessed by Western blotting 48 h after RNAi.

DNA fragments of the Fas promoter (tagged with luciferase) and the HAT1 gene-containing plasmids were synthesized by the Sangon Biotech (Shanghai, China). HEK293 cells (1 × 105 per well) were transfected with 1 μg Fas promoter luciferase reporter and 1 μg HAT1 plasmids together with Lipofectamine 2000 (Invitrogen), following the manufacturer’s instructions. Luciferase activities were assessed 48 h after transfection with a luciferase reporter assay kit (Promega).

Restoration of HAT1 expression in LCCs

LCCs were prepared from the surgically removed LC tissues as described above. The LCCs were transfected with the HAT1 plasmids following the manufacturer’s instructions. The effects of transfection were assessed by Western blotting 48 h after the transfection.

Assessment of apoptosis in LCCs

LCCs were prepared as described above and stained with propidium iodide (PI; 5 μg/ml) and an annexin V kit following the manufacturer’s instructions. The cells were then analyzed by flow cytometry. The annexin V+ PI+ or annexin V+ PI- cells were regarded as apoptotic cells.

The data are presented as mean ± SD. The differences between two groups were determined by Student t test or ANOVA if more than two groups. P<0.05 was set as a significant criterion.

This study was supported by a grant from the National natural science foundation of China (No.81272780).