Lung cancer mortality clusters in Shandong Province, China: how do they change over 40 years?

*The first three authors contributed equally to this work

**The last two authors contributed equally to this work

Shandong Province, which has a population of more than 96 million (nearly twice the population of South Korea) is the second most populated province in China. Shandong is also one of the provinces with the fastest growth rate in lung cancer mortality in China [7, 8]. The rank of lung cancer in cancer mortality among the types of cancer that cause death went up from the 5th in the 1970s to the 1st during 2004-2005 [9]. Lung cancer is sometimes found to be concentrated in some specific regions [10]. Identifying these regions will help to identify the pathogenic factors of lung cancer and targeted strategies for preventing and controlling this highly fatal disease.

Previous studies have suggested that there were variations in spatial distribution of lung cancer in different regions in China. These studies are usually based on a samples from surveillance sites or retrospective sampling survey of causes of death in some specific regions (different separated counties) of China [11–13]. Data in a few separated counties was used to represent the whole province in these studies. However, no studies in China have explored the clusters of lung cancer mortality based on surveillance data from an entire province, especially a province that has a large population (e.g., nearly 100 million, or 8 percent of China’s population). In addition, to the best of our knowledge, no studies have examined the change of clustering regions of lung cancer mortality at county level over different eras (e.g., over 40 years) using Spatial Scan Statistics. Furthermore, there is limited published information describing the disease burden and spatial distribution of lung cancer in Shandong, China. Such information may be important for planning cancer control and prevention activities.

To remedy this deficiency, this study was designed to determine the spatial distribution and high risk areas of lung cancer mortality based on the whole population at the county level in Shandong, China, and examine the difference in spatial distribution of lung cancer mortality between the time period of 2011-2013 and the time period of 1970-1974.

Figure 1: ARMR and ASMR of lung cancer in Shandong Province for different eras. 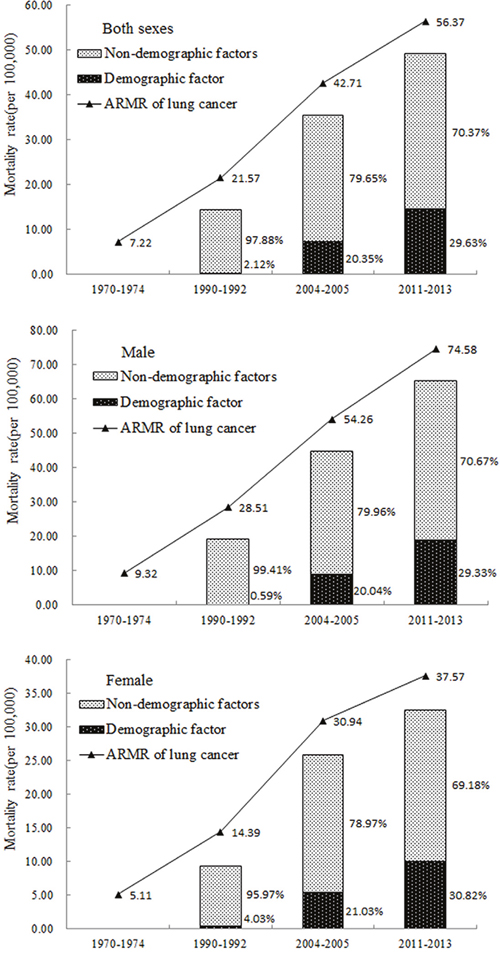 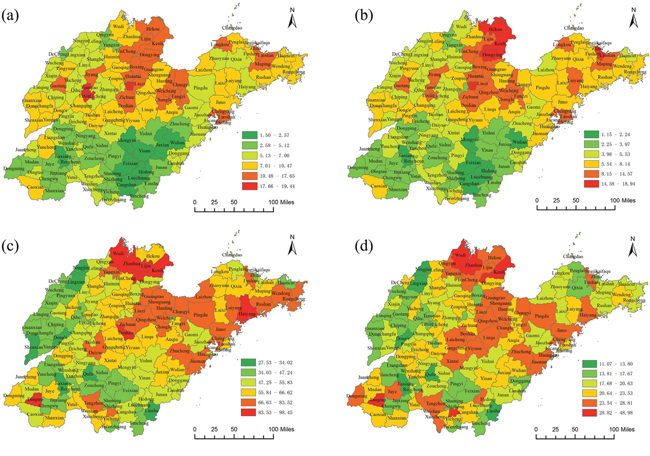 Table 1: Results of the spatial scan analysis of lung cancer mortality at the county level in Shandong Province

Note *: “Most likely cluster” was defined when the maximum log likelihood ratio (LLR) with statistical significance was detected by Monte Carlo simulation in spatial analysis; the other LLR values with statistical significance were identified as “Secondary cluster”. The relative risk (RR) was the ratio of the mortality inside a cluster area to the mortality outside a cluster area. 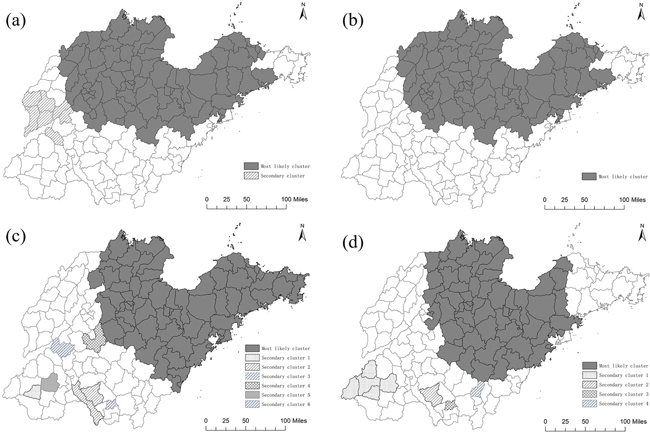 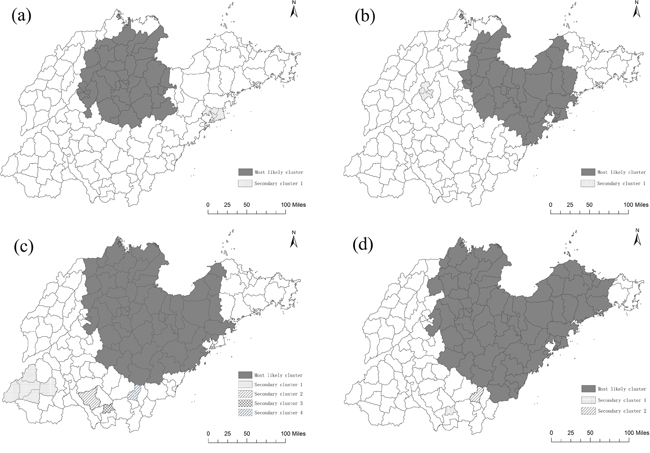 The spatial statistical analysis developed by Kulldorff and Nagarwalla has been proved to be an effective method for discerning geographical patterns and detecting spatial clusters based on smaller units [24, 25]. In this study, we detected, for the first time, the spatial distribution and high-risk clusters of lung cancer mortality at the county level for a whole provincial population in China. We find out that the most likely cluster during 1970-1974 was located in the northern region of Shandong Province, around the Bohai Bay and including 77 counties with a relative risk (RR) of 1.81 compared to the rest of Shandong Province. After age adjustment, the most likely cluster did not change, still including the same 77 counties. During 2011-2013, the northern region of Shandong Province around the Bohai Bay was still the most likely cluster of lung cancer mortality, with or without age adjustment. As we know, Shengli Oil Field, which is the second largest oil field [26] in China (development began in 1961), is located in this region (mainly in Dongying). Around Shengli Oil Field, some other petrochemical enterprises were also established. Thus, the persistent clustering of lung cancer mortality in this region might be related to the relatively high concentration of petrochemical enterprises in the same region of Shandong Province. Some researchers [27, 28] had found out that residents near industrial areas are more likely to develop various diseases including lung cancer, which is consistent with the results of our research.

In this study, some secondary clusters were detected in the southwestern region of Shandong Province for the period of 2011-2013. These areas were low in lung cancer mortality previously and are mainly agricultural counties with a low level of industrialization. This is a new discovery, which will be studied further in the future.

Tobacco smoking and air pollution [29] have been identified as risk factors for lung cancer. About 80% of the lung cancer burden in men and 50% of the burden in women were attributed to these two risk factors. The incidence of lung cancer in China has increased during the past decades. Because of the high smoking rate for the past 20 years, lung cancer incidence in China may continue to increase for the next 10-20 years [30–32]. According to the Ministry of Health of China, most pollutant exposure occurs indoors, where people, especially women and children, spend the majority of their time [33]. Some common sources of indoor pollutants include tobacco smoke, second-hand smoke, cooking fumes, formaldehyde and benzene from decorative and building materials, and household products such as pesticides [34]. Previous studies had also identified household solid fuel (e.g., coal, which is used extensively in China for heating and cooking in homes, especially in rural areas) as a major source of household air pollution in Xuanwei [35], a rural county of China, attributing the high lung cancer mortality of this region to the heavy use of smoky coal [36]. According to our study, although the lung cancer mortality rate in male was much higher than that in female, the rising trend and attributable demographic and non-demographic factors were similar between males and females. This indicates, to some extent, that the increasing trend in lung cancer mortality might have little to do with the change of smoking rate, as the smoking rate in women was relatively low (all less than 3.1% since 2000 to 2013) in Shandong Province and the smoking rate had decreased slightly in Shandong Province from 2000 to 2013 [37–39]. Previous study also found out that lung cancer mortality rate in Chinese women was higher than the rate among women in some European countries despite a lower prevalence of smoking. This is thought to be caused by indoor air pollution from unventilated coal-fueled stoves and cooking fumes [40].

Shandong Province, located in the east of mountain Tai-Hang and adjacent to the Bohai Sea and the Yellow Sea, has the second largest population among all provinces in China (Figure 3). Data on lung cancer caused deaths has been collected through official surveillance of the SDRS established in 2006. The SDRS, initially only covering the population of Disease Surveillance Points (DSPs), has been collecting data from the entire Shandong population since 2010 [44]. In this study, the case was defined as a death of residents in Shandong during 2011 to 2013 due to malignant neoplasm of lung cancer (C33, C34) according to International Classification of Diseases, 10th reversion (ICD-10) [45] Supplementary Table 1. The death data was adjusted for underreporting based on underreporting surveys using the capture-mark-recapture method (CMRM) and official reports from the Household Registration System in China [46–48, 44]. In order to ensure data comparability, all quality control indicators such as the proportion of unknown cause of death, the under-reporting rate and the accuracy rate for ICD coding were all within the control range. CMRM is an epidemiologic method to estimate the size of targeted population with a specific characteristic [49]. It is hypothesized that M independent individuals in a randomly acquired sample from a targeted population with N individuals are marked and released to the original population. Another random sample with n independent individuals from the same targeted population is then acquired to identify the number of marked individuals (m). An unbiased formula is used to estimate the size of the targeted population based on the two independent samples. The population information used was from Shandong statistical yearbook, and age-specific sizes of age-specific population were acquired for 142 counties (cities/districts) in Shandong between 2011 and 2013.

To reduce mortality variations in small populations and areas, an average reported mortality rate (ARMR) of lung cancer was calculated for each county (district) as a ratio of total deaths over corresponding population during the periods of 1970-1974, 1990-1992, 2004-2005 and 2011-2013. An age standardized mortality rate (ASMR) was calculated using the Chinese population in 1964. A difference decomposing method was applied to estimate the contribution of demographic and non-demographic factors for the change in ARMR in different eras [54]. The detailed formulae for the difference decomposing method can be found in previous publication [20]. The following formulae can help to better understand the method used.

The ARMR and ASMR of lung cancer were illustrated using GIS-based maps at the county level to visualize the distribution patterns of lung cancer and high-risk (hotspot) areas in Shandong Province. The county-level point layer, including the latitude and longitude of the central point of each county, was created using GIS with a scale of 1:100,000 for the maps.

Purely spatial analyses using discrete Poisson model were performed to detect the spatial pattern of lung cancer in Shandong Province. The statistical significance of clustering was determined based on Monte Carlo hypothesis testing [55] by comparing the likelihood ratio test statistic from the observed data set with the test statistic from 999 random data sets generated under the null hypothesis of no clustering. The level of statistical significance was set as 0.05 in this study. Spatial Scan Statistics detect disease clusters by gradually scanning a window across space and comparing the numbers of observed and expected cases inside the window. In our study, we specified a maximum spatial cluster as one with 50% of the population at risk and conducted the scanning window in the shape of a circle. A most likely cluster was defined as a cluster with a maximum Log Likelihood Ratio (LLR) above the statistical significance. Secondary clusters that rejected the null hypothesis but do not overlap with the most likely cluster were also reported.

The whole research protocol of this study has been approved by the Ethics Committee of Preventive Medicine in Shandong Center for Disease Control and Prevention in 2013, under permission No. 2013020. All methods including data collection and analysis method were performed in accordance with the relevant guidelines and regulations.

We would like to thank the officials of local health agencies and all participants and staff at the study sites for their cooperation.

No conflicts of interest to declare by any of the authors.

The research was supported by Shandong Science and Technology Development Plan Project (2016GSF201231) and the National Natural Science Foundation of China (81302505).