Growing evidence indicates that inflammation plays an important role in cancer progression and prognosis; however, the prognostic role of platelet to lymphocyte ratio (PLR) in colorectal cancer (CRC) is unknown. A cohort of 1845 CRC patients from the Department of Surgical Oncology at The First Hospital of China Medical University (CMU-SO) was retrospectively analyzed. Harrell’s concordance index (c-index) was used to determine the optimal cut-off value of PLR and evaluate its predictive ability. Our results from CMU-SO indicated that the overall survival (OS) rate was significantly lower in the high-PLR group compared with the low-PLR group (P = 0.001). A similar result was observed for the cancer-specific survival (CSS) rate between these two groups (P = 0.001). The multivariate analysis indicated that high PLR was an independent prognostic indicator of poor OS (hazard ratio [HR] = 1.356, 95% confidence interval [CI] = 1.117–1.647, P = 0.002) and CSS (HR = 1.364, 95% CI = 1.111–1.675, P = 0.003). In addition, the c-indexes of TNM staging combined with PLR were greater than those of TNM staging alone (OS: 0.768 vs. 0.732; CSS: 0.785 vs. 0.746). In conclusion, elevated PLR is a negative prognostic indicator of CRC and may serve as an additional index of the current TNM staging system for predicting CRC.

Colorectal cancer (CRC) is one of the most common digestive cancers and the third leading cause of cancer-related death in the United States [1]. To date, the TNM staging system has been regarded as the gold-standard method for predicting prognosis and guiding treatment. However, patients with the same TNM stage may have a different clinical prognosis. Therefore, novel biomarkers are required to complement the current TNM staging system and accurately predict the prognosis of CRC.

A growing body of evidence indicates that the host inflammatory response can affect the progression and prognosis of cancer [2, 3]. In fact, previous studies have indicated that inflammatory biomarkers, including neutrophil to lymphocyte ratio [4–6], prognostic nutritional index [7, 8], lymphocyte to monocyte ratio [9, 10] and C-reactive protein [11, 12], can be used in the prognosis of gastrointestinal cancers. However, a consensus on the prognostic value of the platelet to lymphocyte ratio (PLR) in CRC was not reached. Ozawa et al.[13] and Kwon et al.[14] reported that PLR was significantly associated with prognosis in CRC patients, whereas other authors indicated that elevated PLR did not predict poor prognosis [15, 16]. In addition, no studies have evaluated the potential use of PLR as an additional tool in the current tumor staging system, and the optimal cut-off value of PLR for predicting prognosis in CRC remains unknown.

In this study, we retrospectively analyzed a cohort of patients from our institution and explored the optimal cut-off value of PLR for predicting prognosis in CRC. Moreover, we evaluated the additional prognostic value of PLR in the current TNM staging system.

To date, the optimal cut-off value of PLR for predicting prognosis in CRC remains unknown. We used the Harrell’s C-index (c-index) method to determine the optimal cut-off values of PLR for overall survival (OS) and cancer-specific survival (CSS). We calculated the c-index values for different cut-off values. Our results indicated that the c-indexes for OS and CSS were maximum when PLR was 130 (Supplementary Table 1). Among the 1845 patients from CMU-SO, 1018 patients (55.18%) had a PLR < 130 and 827 patients (44.82%) had a PLR ≥ 130 and were classified into the low-PLR group and high-PLR group, respectively.

Among 1845 CRC patients from CMU-SO, female patients, larger tumor size, tumor location in the colon, poorer differentiation, deeper depth of tumor, and advanced TNM stages were more frequently observed in the high-PLR group than in the low-PLR group (P < 0.001). However, there was no significant difference in age (P = 0.721), lymph node metastasis status (P = 0.140), and distant metastasis status (P = 0.932) between these two groups (Table 1).

Table 1: Associations between clinicopathological features and PLR in CRC patients from CMU-SO

In CRC patients of CMU-SO, OS rate was significantly lower in the high-PLR group than that in the low-PLR group (P = 0.001, Figure 1A, Table 2). A similar result was observed for the CSS rate between these two groups (P = 0.001, Figure 1B, Table 2). Moreover, we divided PLR in tertiles, quartiles, and quintiles in the prediction of OS and CSS, and the results indicated that no matter how to group, PLR was significantly associated with OS and CSS in CRC (P < 0.05, Figure 2).

Figure 1: Kaplan–Meier curves of survival based on the platelet to lymphocyte ratio in CRC patients from CMU-SO. (A) Overall survival; (B) cancer-specific survival. 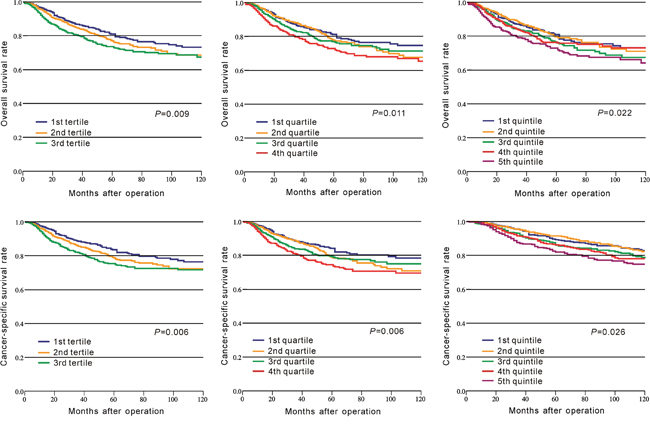 Figure 2: Kaplan–Meier curves of survival based on the platelet to lymphocyte ratio divided in tertiles, quartiles, and quintiles.

Table 2: Univariate and multivariate survival analyses of OS and CSS in patients with colorectal cancer from CMU-SO 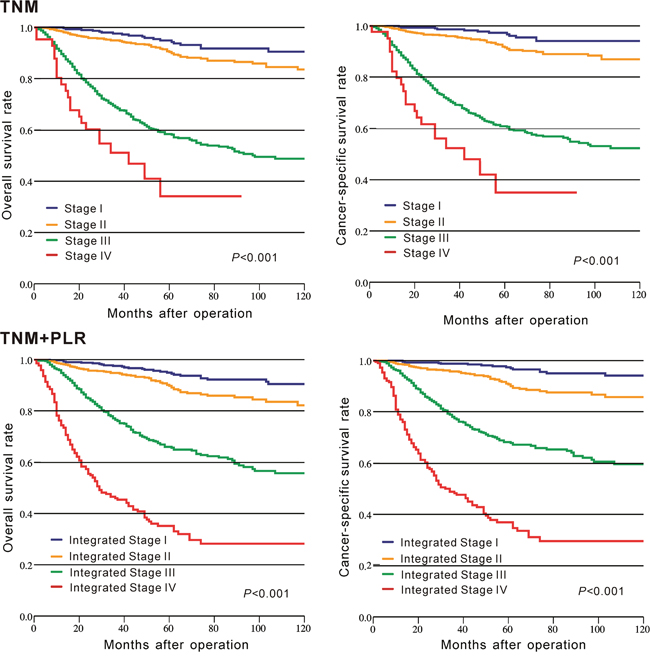 Figure 3: Kaplan–Meier curves of survival based on TNM staging and TNM staging combined with the platelet to lymphocyte ratio in CRC patients from CMU-SO.

In this study, we retrospectively analyzed a cohort of patients from our institution. We found that elevated PLR was an independent prognostic factor for poor OS and CSS. Furthermore, elevated PLR was significantly associated with advanced tumor features, including larger tumor size, poorer differentiation, deeper depth of tumor, and advanced TNM stages. These results demonstrated that elevated PLR was a predictive indicator of poor prognosis and was significantly associated with advanced tumor features in patients with CRC.

The mechanisms underlying the relationship between elevated PLR and poor prognosis of CRC are still unknown. Recent studies have demonstrated that platelets can prevent the death of tumor cells by natural killer cells and platelets secrete angiogenic and tumor growth factors, including vascular endothelial growth factor and platelet-derived growth factor, and thus promote the growth, progression, and spread of tumor [17–20]. Furthermore, it has been reported that thrombocytosis is associated with poor prognosis in CRC [21, 22]. Lymphocytes are the main components of the immune system of the host and can eliminate cancer cells and prevent tumor progression [23]. Some studies have shown that low lymphocyte count was a poor prognostic factor in patients with CRC [24, 25]. Therefore, elevated PLR, relatively high platelet counts, and low lymphocyte counts may predict poor prognosis of CRC. On the other hand, our results confirmed that elevated PLR was significantly associated with advanced tumor features, including poorer differentiation, deeper depth of tumor, and advanced TNM stages. Therefore, elevated PLR was associated with the extent of tumor progression and consequently may affect the survival of patients with CRC. However, it is of note that malignant tumor usually induces a hypercoagulable state in the host [26] and results in thrombocytosis. Whether elevated PLR is a cause or consequence of cancer progression is unknown and needs to be elucidated.

Some pooled studies explored the prognostic role of PLR in CRC and reported that elevated PLR was significantly associated with poor prognosis [30, 31]. Our study was based on the northern Chinese population and had some new findings. First, we used a new statistical method to determine the optimal cut-off of PLR. Furthermore, we evaluated the additional prognostic value of PLR in the current TNM staging system. We found that that TNM+PLR had a better prognostic capacity than TNM staging alone. Therefore, PLR may serve as an additional parameter in the current TNM staging system and may increase the accuracy for predicting the prognosis of CRC patients.

This study has several limitations. First, the data of the cohort patients were analyzed retrospectively. Second, because of the long data collection period in this retrospective cohort analysis, advances in surgery and chemotherapy during this period may affect clinical outcomes. Third, owing to the lack of relevant data, the relationship between PLR and adjuvant chemotherapy was not explored.

In conclusion, our results indicated that elevated PLR was a poor prognostic indicator in CRC patients, and PLR might serve as a complement to the current TNM staging system for predicting CRC.

Data on consecutive patients who underwent curative resection of CRC between January 2000 and May 2014 at the Department of Surgical Oncology at the First Hospital of China Medical University (CMU-SO) were collected retrospectively. Patients who met the following criteria were selected: (1) CRC was diagnosed by histopathology; (2) patients did not receive neoadjuvant therapy or anti-inflammatory treatment before surgery; and (3) laboratory tests were conducted before surgery. Patients who underwent surgery in emergency circumstances, including obstruction and perforation, were excluded. Patients with liver cirrhosis, portal vein hypertension, past history of heart disease, and long-term use of anticoagulant drugs were not included in this study. After this selection, 1845 patients were included in our study. Follow-up was completed for all patients until October 2015. The median follow-up period was 50 months. Preoperative laboratory data and relevant clinicopathological variables, including tumor size, tumor location, tumor stage, and differentiation grade, were recorded. All cases were restaged according tothe seventh edition of the AJCC/UICC TNM classification system.

The associations between categorical variables were analyzed using the chi-square test. The association between PLR and prognosis, including OS and CSS, was determined using the Kaplan-Meier method with the log-rank test. Multivariate analysis was conducted using the Cox proportional hazards model. The predictive capacity of the different categories was evaluated by measuring discrimination, which refers to the ability to distinguish between high-risk and low-risk patients. We used c-index [32, 33] to quantify discrimination. A model with perfect predictive capacity would have a c-index of 1.00. A greater c-index indicates a better model for predicting the outcome.

In this study, the novel category TNM+PLR, which combined TNM staging with PLR, was based on the hazard ratio (HR) calculated by the Cox proportional hazards model. The formula of the Cox proportional hazards model is H(t)/H0(t) = exp (β1x1+β2x2+β3x3+…+βkxk), where x1…xk are a collection of predictor variables, TNM and PLR in this study, β1…βk are regression coefficients determined by a least squares approach, and the H(t)/H0(t) is the HR. Moreover, we grouped the calculated HR into four risk levels and formed the novel category TNM+PLR using the method of c-index.

CL and PG contributed equally to this work. CL, GP, and ZNW were responsible for conception and design of the study. YXS, PG and XWC collected clinical cases, did statistical analyses and the writing of report. YCY, LYW and DHY participated in providing statistical expertise. YXS and QZX provided clinical expertise and interpretation of data. The report was drafted, revised, and approved by all authors.

We thank the department of Surgical Oncology of The First Hospital of China Medical University for technical assistance.

19. Suzuki K, Aiura K, Ueda M, Kitajima M. The influence of platelets on the promotion of invasion by tumor cells and inhibition by antiplatelet agents. Pancreas. 2004; 29:132-140.