Comprehensive assessment of the association between estrogen receptor of alpha polymorphisms and the risk of prostate cancer: evidence from a meta-analysis

Prostate cancer (PC) is a common malignant tumor occurring in males and has become the predominant cause of death among males, which accounts for about 10% of male mortality [1]. However, the pathogenesis of PC remains to be determined. Several studies reported that both genetic susceptibility and environmental factors such as diet and lifestyle exerted major influences on the occurrence of PC [2]. In particular, single nucleotide polymorphism (SNP) derived from single nucleotide point mutation was considered to be one of the important material carriers with genetic susceptibility [3]. As the third generation genetic marker, SNP was polymorphic and derived from the variation of individual nucleotide at the same site of DNA sequence. Due to the diversity in diet, geological areas and genetic factors, the incidences of PC among races remained differences and similarities. Estrogen receptor of alpha (ESRα), found by Jensen in 1971, was an estrogen-dependent transcription factor, and located at the Zone 1, Area 25 of long-arm of the No. 6 chromosome (6q25.1), and the polymorphic sites of its intron and exon areas had been already identified [4]. Meanwhile, as a member of nucleus receptor super-family, ESRα could transfer into nucleus of PC cells in combination with estrogen, regulate the signal pathways of gene transcription and promote cell proliferation [5]. Currently, A number of anti-cancer drugs play important roles in disturbing and hindering the combination of the nodes to achieve the therapeutic goal [6]. It is possible that the development of PC may be affected by the SNP site of ESRα. However, the results were not always consistent [9–12]. Different regional and ethnic groups varied from inherit susceptibility genes and SNPs due to the highly genetic heterogeneity of PC.

It has been shown that there is certain correlation between PC susceptibility and ESRα rs9340799 or rs2234693, but unanimous conclusion has not been reached yet in the repetitive studies. Therefore, it remains to be verified further. This study aims to assess the association of ESRα sites rs9340799, rs2234693 and the susceptibility of PC according to all published literatures using Cochrane system assessment method. These findings will provide reliable evidence for therapeutic approahes in PC disease.

In the meta-analysis, totally 112 relevant articles were obtained under some fundamental restrictions. After filtering, 24 eligible articles [14–37] were finally selected on the basis of the inclusion and exclusion criteria. The flow chart of selecting articles process was presented in Figure 1. Therefore, there were 41 independent case-control studies in total, and the genotype distribution of control group was based on Handy-Weinberg. For ESRα rs9340799, there were 17 studies involving a total of 3960 PC cases and 4848 normal controls. For ESRα rs2234693, 24 studies (5477 PC cases and 10708 normal controls) were available, respectively. The main characteristics of these included studies were shown in Table 1. 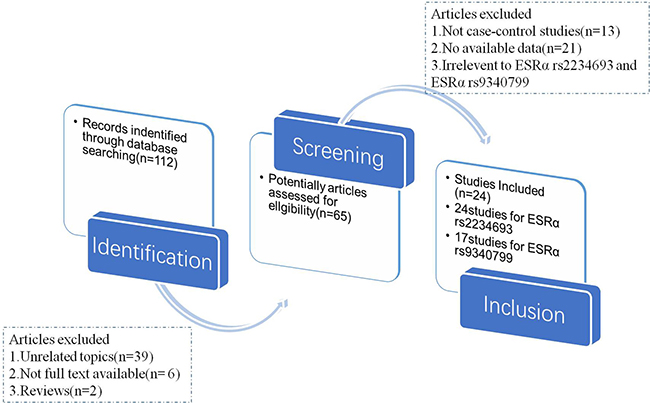 Figure 1: The flow chart of article selected in meta-analysis.

Table 1: The main characteristics of all eligible studies in meta-analysis

ESRα rs9340799 polymorphism and susceptibility to PC. To assess the association of ESRα rs9340799 polymorphism with PC, 17 studies were included in this meta-analysis with 3960 PC cases and 4848 normal controls (Table 2). Both allele and additive models were tested in the overall population. PC susceptibility in Caucasian population showed strong association in the allele model (AvsG), and patients carrying mutant gene A were 0.84 times incidence rate of susceptibility to PC (OR = 0.84, 95 CI%: 0.72–0.96, P = 0.000). In the additive model (AAvsGG), PC case group obtained 0.75 times of probability on AA genotype and enhanced the risk of disease (OR = 0.75,95% CI, 0.56–1.00, P = 0.002). In contrast, there was no significant association between Asian and African populations in all the models. Detailed results were listed in Table 2. Test of heterogeneity in the other models (AAvsAG+GG, AA+AGvsGG, AGvsGG) were not significant among different races of populations.

Table 2: Meta-analysis of the association between ESRα rs9340799 and prostate cancer 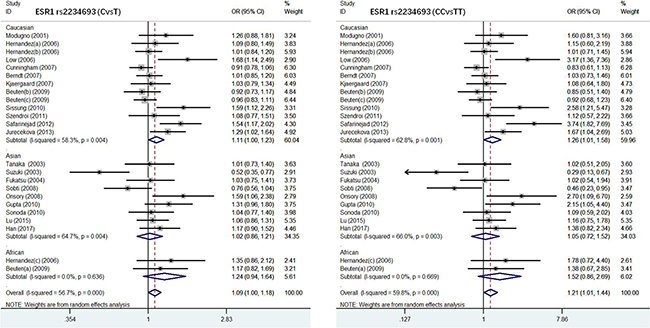 In Table 3, we demonstrated the distinct difference of allele frequencies in Caucasian, Asian and African populations in the meta-analysis of ESRα rs9340799 and rs2234693, which were consistent with the data of 1000 genome population project, European ancestry (EUR), Asian ancestry (EAS), African ancestry (AFR).

Table 3: The allele frequency comparison between the meta-analysis and 1000 genomes project

Begg’s funnel plot and Egger’s test were performed to estimate publication bias. As shown in Figures 4 and Figure 5, the funnel plots presented scattered distribution but large symmetry, indicating that there was no obvious evidence of publication bias in ESRα rs9340799 (AvsG P = 0.081, AAvsGG, P = 0.111) and ESRα rs2234693 (CvsT, P = 0.166, CCvsTT, P = 0.136). In addition, we conducted sensitivity analysis to assess the stability of meta-analysis between ESRα rs2234693 and PC risk. As shown in Figure 6 and Figure 7, there was no significant difference, suggesting that articles selected in this research were available.

Figure 4: Begg’s funnel plot of publication bias in meta-analysis of the association between ESR1 rs9340799 and prostate cancer risk(AvsG, AAvsGG).

Figure 5: Begg’s funnel plot of publication bias in meta-analysis of the association between ESR1 rs2234693 and prostate cancer risk(CvsT, CCvsTT).

ESRα is a kind of ligand-activated nuclear transcription factor and mainly distributes at the clearance between the basal epithelial cells and the matrix of the prostate. The gene coded ESRα was located at 6q25.1 of the human chromosome, which possessed 140,000 bp and consisted of eight exons and seven introns. Two of the most common polymorphic sites in ESRα were rs9340799 and rs2234693, both of which were situated in the first intron with 50 bp of distance, the same as the positive chromosome area using large-scale genetic scanning chain analysis as reported previously [37]. The first intron lied at the end of amidogen, which was located in the main transcriptional domain, and contained the major adjustment sequences such as promoters and enhancers. Base T/C or A/G substitution in the area may cause the loss of existed restriction enzyme site and produce a new one instead, and each behavior may lead to the error splicing and bring abnormal expression products. In addition, estrogen wouldn’t work without combining with ESRα, and the abnormal ESRα expression would directly induce the ultimate physiological effect of the estrogen in body, and finally affect the occurrence and development of PC. Therefore, it is likely that the genetic polymorphisms at ESRα rs9340799 and rs2234693 may contribute to the risk of PC.

So far there were four published papers [9–12] in this meta-analysis concerning the association of the polymorphisms of ESRα (rs9340799 or rs2234693) with PC susceptibility. However, the number of references regarding those results was unstable due to different publication period and standard for data screening. In this paper, 17 studies on ESRα rs9340799 and 24 studies on ESRα rs2234693 were included according to the strict inclusion and exclusion critiria, through searching in both Chinese and English databases. We found that there was statistically significant difference in distribution frequency of genetic polymorphisms of ESRα allelic genes between cases and controls (p < 0.05). Further analysis on PC patients from different races indicated that both base A and AA of ESRα rs9340799 may increase the risk of PC in overall population, particularly in European, however, the association was not significant in the populations of Asian and African. Similarly, a remarkable correlation was found in base C and CC of ESRα rs2234693 in Europeans and Asians, suggesting a higher risk of PC in these populations than that in Africans. Considering the limited samples from only two studies in African in this meta-analysis, studies with larger sample size including diverse ethnic populations are required to investigate the association between the polymorphisms of ESRα and the susceptibility of PC.

Consistent with the report of Gu [11], we observed that there was a certain correlation between PC and ESRα rs9340799, and the precision of such correlation reached to polymorphism of the site, which induced an affirmative result through further study on larger samples. Meanwhile, it should be noted that the control group of ESRα rs9340799 had no representativeness in the h-w genetic balance test according to the standard of P > 0.05, while it was still acceptable if the standard was P > 0.01. All results in this study were selected according to the standard of P > 0.05, therefore, larger sample size was required in the future. Besides, different conclusions were reached in this study on the correlation between the genetic sites of ESRα rs2234693 and PC compared with previous studies. On the one hand, as reported before, PC was a kind of disease affected by multiple genes, which induced various clinical features. It was inevitable to reach negative results if the samples were inadequate or assigned randomly.

It is worth mentioning that there were still have several limitations in this meta-analysis: 1) For lack of linguistic experience, databases used in this study were limited to English and Chinese; 2) This study focused on the analysis on ESRα rs9340799 and rs2234693 only, without considering the interactions between other genes and environmental factors. Therefore, stricter design was needed to control destructive factors, and larger samples and homogeneous cases were required in the comparable and prospective studies. At the same time, the interactions between the genes and environmental factors would be fully considered in the pathogenesis of PC, which provided more reliable evidences for basic study and clinical treatment.

The inclusion and exclusion criteria

Inclusion criteria: (1) the type of study was case-control; (2) cases were histologically diagnosed with PC patients, the pathological type was adenocarcinoma, control group was unrelated healthy people; (3) the distribution of genotypes was fully justified with Hardy-Weinberg genetic balance law; (4) the literature provided a complete genotype data. Exclusion criteria: (1) there was only case but without control group; (2) study which was repetitive publication; (3) incomplete data [13].

Two researchers independently read abstracts, and the eligible literatures were intensively read for further study. Any differences were settled by discussion or the third researcher who decided whether be taken into the following. Quality of included reference were evaluated with Cochrane Reviewer ‹s Handbook 5 System Evaluation Handbook: (1) the diagnostic criteria was clear; (2) the sample size was sufficient; (3) the case and control groups were comparable; (4) statistical analysis method was appropriate; (5) existence of bias was discussed. Each term above was recorded 1 points, > 2 points for reliable quality. The following data was extracted from each included literature: the first author, year of publication, sample size, race, genotype frequency of case and control group, Handy-Weinberg.

Meta-analysis was performed with Stata software. Q-test and I2-test were firstly used to judge the heterogeneity. Q-test P > 0.1 or I2 < 50% indicated that no significant heterogeneity was found between these studies, instead, fixed effect model should be used to combine. On the contrary, Q-test P < 0.1 or I2 > 50% stood for heterogeneity between these results, and such heterogeneity was not found from clinic, therefore, these data was merged using a random effect model. The combined odds ratio (OR) and 95% confidence intervals (CI) were then calculated, and difference (P < 0.05) was regarded as statistical significance. Egger’s and Begg ‘s test was applied to assess the publication bias. At last, OR value distribution was demonstrated with forest map, funnel plots and sensitive graphs, respectively.

This work was supported by the Chongqing Scientific Research Innovation Project (CYB16094; to G.L).