Shikonin, a naphthoquinone isolated from the root of medical herb Lithospermum erythrorhizon, has been reported to have anti-inflammatory effect. However, there is no related research for the treatment of shikonin on hepaic injury. The purpose of this study was to investigate the effects of shikonin on D-Galactosamine and Lipopolysaccharide-induced hepatic injury in mice. Male BALB/c mice were pretreated with shikonin 1 h before LPS/D-GalN treatment. The pathological changes of hepatic injury were detected by H&E staining. The levels of TNF-α and IL-1β in hepatic tissues were detected by ELISA. The levels of alanine aminotransferase (ALT) and aspartate aminotransferase (AST) were also measured in this study. In addition, the expression of TLR4 and NF-κB were determined by western blot analysis. These results suggest that shikonin effectively prevents LPS/D-GalN-induced liver injury by inhibiting AST and ALT levels, as well as inflammatory cytokines TNF-α and IL-1β production. The expression of TLR4 and NF-κB activation induced by LPS/D-GalN were also inhibited by treatment of shikonin. In vitro, shikonin significantly inhibited LPS-induced TNF-α and IL-1β production, as well as TLR4 expression and NF-κB activation. In conclusion, the results of the present study suggest that shikonin attenuates LPS/D-GalN-induced hepatic injury by inhibiting TLR4 signaling pathway.

Shikonin, a naphthoquinone isolated from the root of medical herb Lithospermum erythrorhizon, has been reported to have anti-inflammatory effect [1, 2]. A previous study showed that shikonin inhibited LPS-induced NO production in RAW264.7 cells [3]. Shikonin also inhibited LPS-induced TNF-α release in rat primary macrophage [1]. Shikonin has been known to attenuate inflammatory mediator production in BV2 microglial cells [4]. Furthermore, shikonin has been reported to attenuate LPS-induced acute lung injury in mice [5]. In addition, shikonin was found to protect against experimental ischemic stroke by inhibiting TLR4 signaling pathway [6]. However, the effects of Shikonin on LPS/GalN-induced acute liver injury remain unclear. The purpose of this study was to investigate the protective effects and mechanisms of shikonin on LPS/GalN-induced hepatic injury. 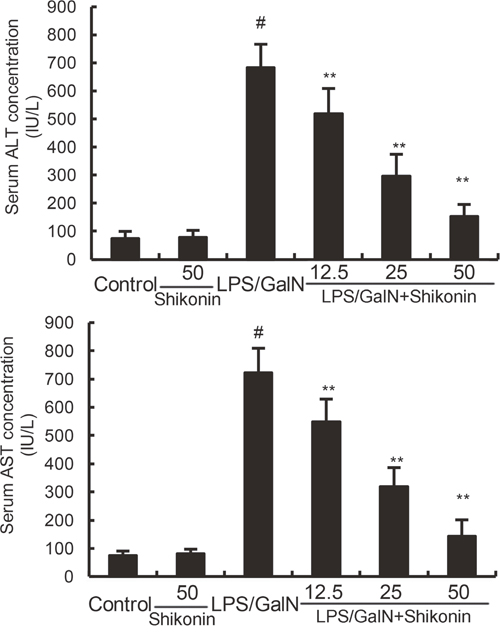 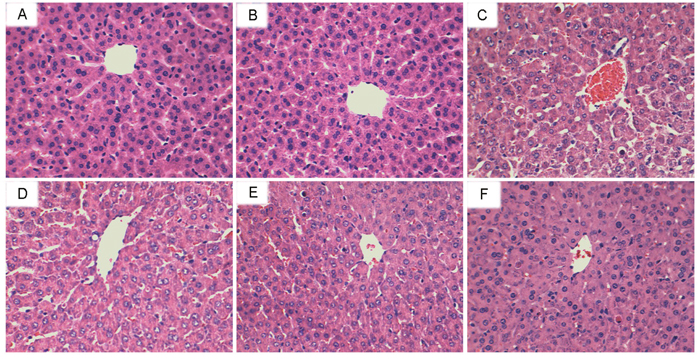 MPO, a quantitative marker of neutrophil infiltration, was used to assess the infiltration of neutrophil in liver tissues [20]. The effects of shikonin on LPS/GalN-induced MPO activity were measured in this study. As shown in Figure 3, shikonin alone did not affect the activity of MPO. Compared with the control group, the MPO activity of LPS/GalN group exhibited significantly increased in liver tissues. However, this increase was inhibited with the administration of shikonin (Figure 3). Liver MDA content was used to assess lipid peroxidation in the liver. In this study, our results showed that shikonin significantly inhibited LPS/GalN-induced MDA production. Furthermore, LPS/D-GalN decreased the level of GSH, and the decrease was raised by shikonin treatment (Figure 3). 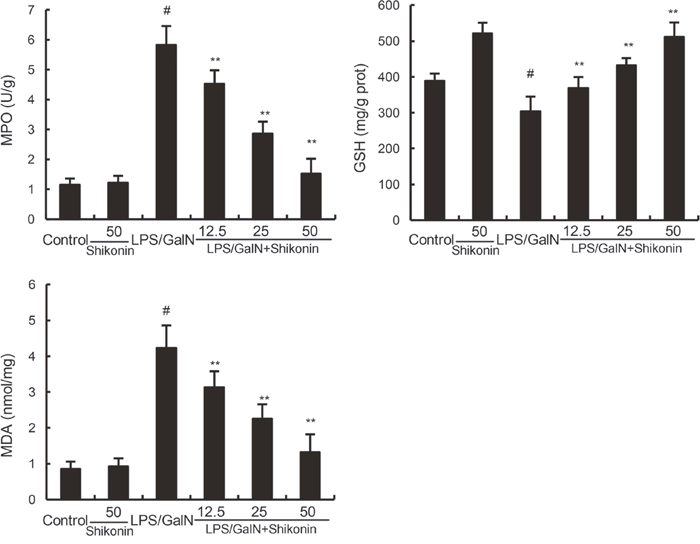 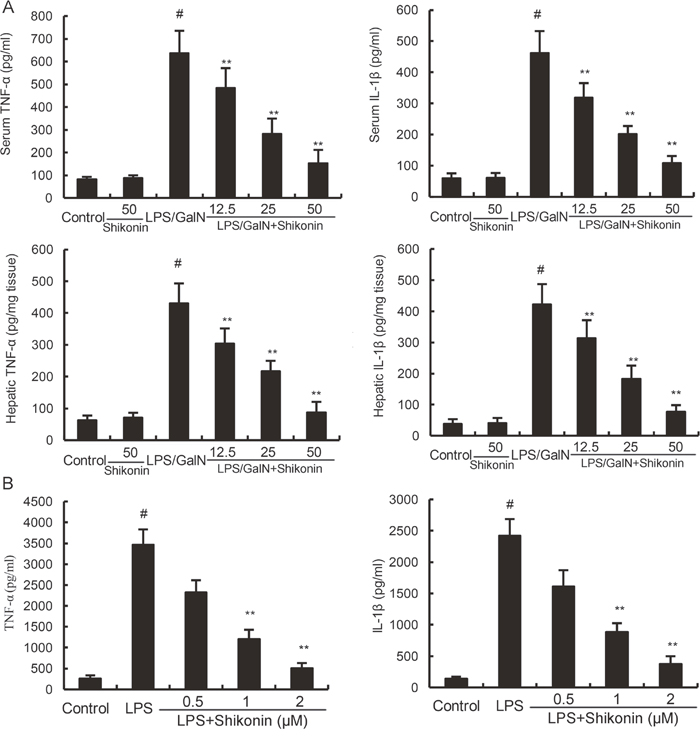 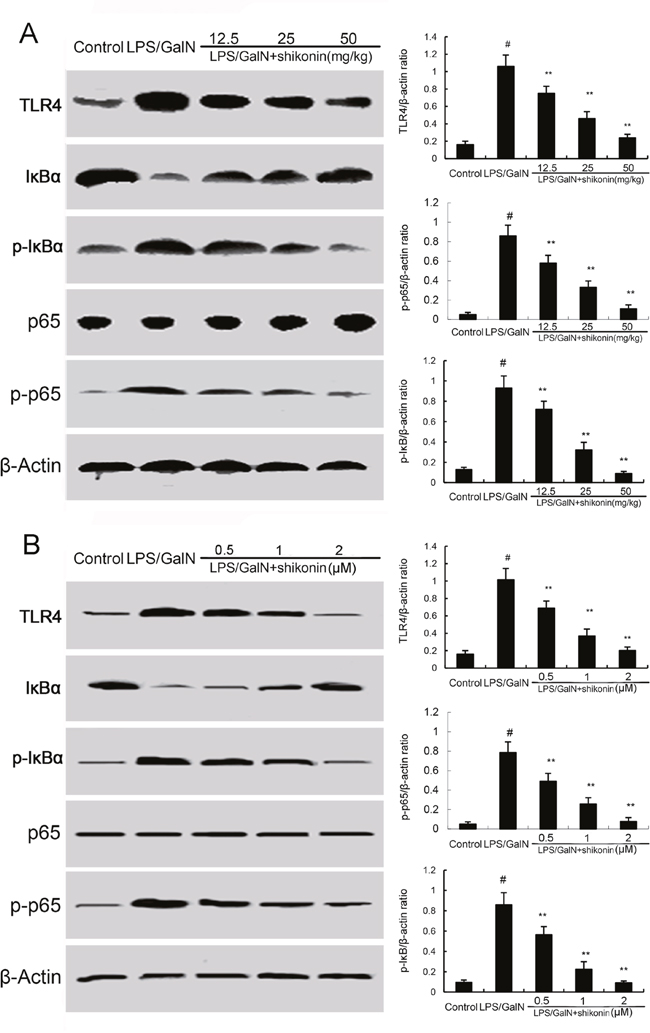 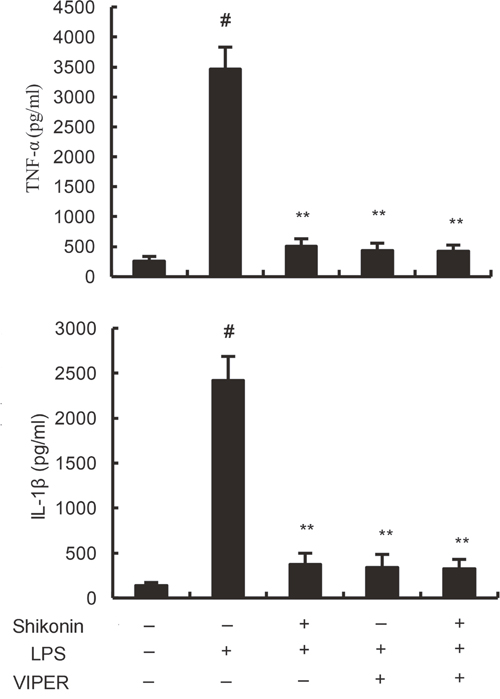 In conclusion, our results suggested that shikonin protected against LPS/GalN-induced acute liver injury by inhibiting of inflammation, which may be mediated by inhibition of TLR4/NF-κB signaling pathway. Shikonin may be a hopeful drug for prevention of acute liver injury.

Male BALB/c mice (6 weeks old) were obtained from the Center of Experimental Animals of Wenzhou Medical University (Wenzhou, China). The mice were housed in an animal room and allowed with food and water ad libitum. The temperature of the animal house was 24 ± 1 °C.

All animal studies were conducted according to the experimental practices and standards approved by the Animal Welfare and Research Ethics Committee at Wenzhou Medical University. Seventy-two mice were assigned to six groups: control group, Shikonin (50 mg/kg) alone group, LPS/GalN group, LPS/GalN+ Shikonin (12.5, 25, 50 mg/kg) groups. The mice of LPS/GalN group were injected intraperitoneally with LPS (60 mg/kg) and D-GalN (800 mg/kg). Shikonin (20 mg) was dissolved in dimethyl sulfoxide (DMSO, 200μl) and then further dissolved in PBS. Shikonin was administrated by intraperitoneal injection. The mice of LPS/GalN+ Shikonin (12.5, 25, 50 mg/kg) groups were received with Shikonin (12.5, 25, 50 mg/kg) 1 h after LPS/GalN challenge. 8 h after LPS/GalN treatment, the blood and liver tissues were collected for subsequent analysis. The chose of 8 h was based on previous studies [35].

Haematoxylin and eosin (HE) staining

Liver tissues were collected, fixed in 10% buffered paraformaldehyde, dehydrated with graded alcohol and embedded in paraffin. Then the tissues were cut into 5 μm sections and the sections were stained with hematoxylin and eosin. The histopathologic changes were detected using an optical microscope (Olympus Optical Co, Tokyo, Japan).

Plasma samples were collected from the mice 8 h after the LPS/GalN injection. Serum levels of ALT and AST were detected by using test kits (Jiancheng Bioengineering Institute of Nanjing) according to the manufacturer’s protocols.

The liver tissues were collected 8 h after LPS/GalN treatment. Liver tissues were homogenized and centrifuged to acquire the supernatants. MPO activity in supernatant of liver tissues was measured by using commercial kit (Jiancheng Bioengineering Institute of Nanjing, Nanjing, China) according to the manufacturer’s protocols. The levels of MDA and GSH were measured by using the commercial detection kit (Nanjing Jiancheng Bioengineering Institute, Nanjing, China) according to the manufacturer’s instructions.

Total proteins from liver tissues were extracted by using a protein extract kit (Shenggong, Shanghai, China) according to the manufacturer’s protocol. The proteins (30 mg) were fractionated by SDS-PAGE and transferred to PVDF membranes. The membranes were blocked with 5% (w/v) fat-free milk for 2h at room temperature. Then the membranes were probed with primary antibodies and horseradish peroxidase-conjugated secondary antibody. Antibody binding were visualized with the ECLPlus Western Blotting Detection System (GE Healthcare, Chalfont St Giles, UK).

All data are expressed as the mean ± SEM. The significance of difference was assessed by one-way ANOVA followed by a Student-Newman-Keuls test. Statistical significance was accepted at p < 0.05.

20. Jaeschke H, Hasegawa T. Role of neutrophils in acute inflammatory liver injury. Liver international: official journal of the International Association for the Study of the Liver. 2006; 26:912-919.