Deletion of Ptprd and Cdkn2a cooperate to accelerate tumorigenesis

PTPRD encodes the protein tyrosine phosphatase receptor type D and is frequently inactivated across many human cancers. Despite its frequent inactivation, it is unknown whether loss of PTPRD promotes tumorigenesis in vivo. PTPRD is located on chromosome 9p, as is CDKN2A, and the two loci are frequently deleted together. Here, we show that co-deletion of Ptprd and Cdkn2a cooperate to accelerate tumorigenesis. Interestingly,heterozygous loss of Ptprd was sufficient to promote tumorigenesis in our model, suggesting that Ptprd may be a haploinsufficient tumor suppressor. The loss of Ptprd resulted in changes to the tumor spectrum in mice and increased the frequency of lymphomas. In total, we reveal that Ptprd is a tumor suppressor that can promote tumorigenesis in concert with Cdkn2a loss.

In humans, PTPRD is located on 9p23-24.3 and is telomeric to CDKN2A. The CDKN2A gene produces the p16Ink4a and p14/p19Arf tumor suppressors [12]. We and others have shown that selective pressure exists for inactivation of both genes on chromosome 9p, by deletion or mutation [8,10,11,13,14]. Despite the potential role of PTPRD loss in cancer, Ptprd deficient mice do not spontaneously develop tumors [15]. In contrast, 69% of Cdkn2a-/- mice develop tumors at an average age of 29 weeks [16]. We generated Ptprd/Cdkn2a co-deleted mice to determine if Ptprd loss contributes to tumorigenesis.

Here, we report that in the absence of Cdkn2a, Ptprd loss results in accelerated tumor development compared to mice lacking Cdkn2a alone. Both heterozygous and homozygous deletion of Ptprd accelerated tumorigenesis suggesting that loss of one copy of Ptprd is sufficient to act on tumor initiation or growth. Furthermore, loss of Ptprd changed the tumor spectrum, resulting in greater frequencies of aggressive lymphomas and histiocytic sarcomas. Our data show that Ptprd loss contributes to tumorigenesis in the setting of Cdkn2a deletion.

We reviewed several genomic studies to define patterns of PTPRD loss in cancer. As shown in Figure 1A, PTPRD inactivation via deletion or mutation occurs frequently. In tumors with PTPRD copy number loss, loss of one copy of PTPRD occurs most commonly (Figure 1A). Moreover, co-deletion of PTPRD and CDKN2A occurs across a number of cancer types (Figure 1B). Co-occurrence of PTPRD and CDKN2A loss is significant across cancers (Figure 1B, p<0.05, 5 > Odds Ratio < 707, Table S1). 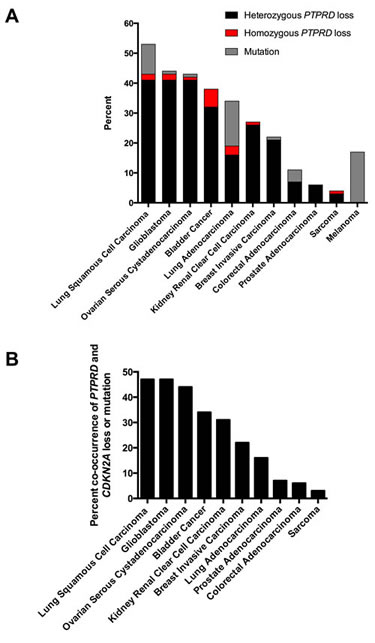 To investigate the role of Ptprd loss in tumorigenesis, we generated mice with loss of Ptprd alone, Cdkn2a, or both, and determined disease-free survival in each genotype. Mice were euthanized and necropsied at the time of onset of clinical signs (hunched, showing a swollen abdomen, or palpable lumps) or at a pre-determined endpoint. In accordance with Uetani et al. (2000), we did not observe tumor development in Ptprd+/- and Ptprd-/- mice (Figure 2A) [15]. However interestingly, Ptprd+/-Cdkn2a-/- and Ptprd-/-Cdkn2a-/- had significantly worse survival times than Ptprd+/+Cdkn2a-/- mice (Figure 2A, p<0.0001). These data suggest that Ptprd loss alone is not sufficient to initiate tumorigenesis but that in the context of Cdkn2a loss, Ptprd loss can cooperate to accelerate tumor development.

The results in Figure 2A suggest that loss of only one allele of Ptprd is sufficient to produce a phenotypic effect. In order to determine whether Ptprd+/- tumors retained an intact wild-type allele, we extracted DNA from tumors (histiocytic sarcoma) in Ptprd+/-Cdkn2a-/- mice and characterized Ptprd gene status using PCR. As shown in Figure 2B, tumors from Ptprd+/-Cdkn2a-/- mice retain an intact wild-type allele. As a control we extracted matched normal DNA (Figure 2C). Our results demonstrate that Ptprd loss and Cdkn2a deletion cooperate to promote tumorigenesis, and that heterozygous loss of Ptprd is sufficient to achieve this effect. 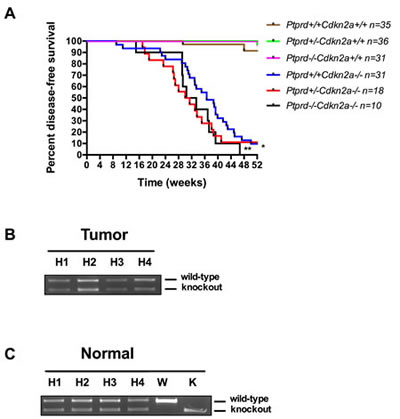 Deletion of Ptprd and Cdkn2a alters the tumor spectrum 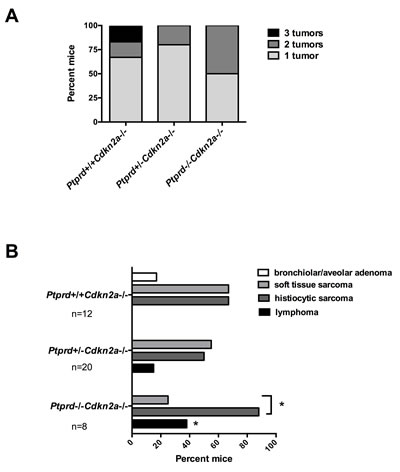 We observed that mice also developed either histiocytic sarcomas or soft tissue sarcomas (Table S2). Histiocytic sarcomas were composed of sheets of discrete round cells with moderate amounts of amphophilic cytoplasm and large round to polygonal nuclei. Within the liver, these cells frequently dissected between hepatic cords and regionally effaced normal tissue architecture (Figure 5A, left). Neoplastic cells were also frequently found within hepatic blood vessels (Figure 5A, middle). The cells stained positively with Mac2 consistent with histiocytic cell origin (Figure 5A, right). Soft tissue sarcomas (fibrosarcomas) were composed of streams, broad interlacing bundles, and frequent herringbone displays of spindle-shaped cells having moderate amounts of eosinophilic, fine fibrillar cytoplasm, poorly demarcated cell margins, and large oval to elongate nuclei. Within the skeletal muscle, these cells dissected between and frequently effaced myocytes (Figure 5B). While mice of all genotypes developed a similar frequency of sarcoma, it was interesting that Ptprd-/-Cdkn2a-/- mice developed significantly more histiocytic sarcomas than soft tissue sarcomas, suggesting that loss of both copies of Ptprd can preferentially promote the development of cancers with hematopoietic origin (Figure 3B, p<0.05). 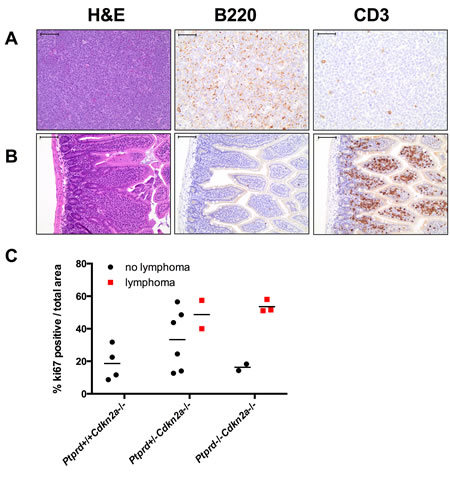 We assessed levels of proliferation, apoptosis, and angiogenesis in the histiocytic and soft tissue sarcomas in Cdkn2a-/- mice with varying Ptprd genotype. All genotypes displayed positive staining for Ki67, TUNEL, and CD34, suggesting that loss of a single copy of Ptprd is sufficient to achieve tumor proliferation, apoptosis, and angiogenesis respectively (Figure 5C). However, no significant differences in the intensity or quantity of staining of Ki67, TUNEL, or CD34 were observed between the genotypes (Figure 5C, Table S3). Since it was previously shown that p-Stat3 is a substrate of PTPRD, we measured the levels of p-Stat3 by immunohistochemistry. No significant differences in the levels of p-Stat3 were observed, suggesting that Ptprd may have other substrates that mediate its tumor suppressive function in these tumor types (Figure 5C, Table S3). 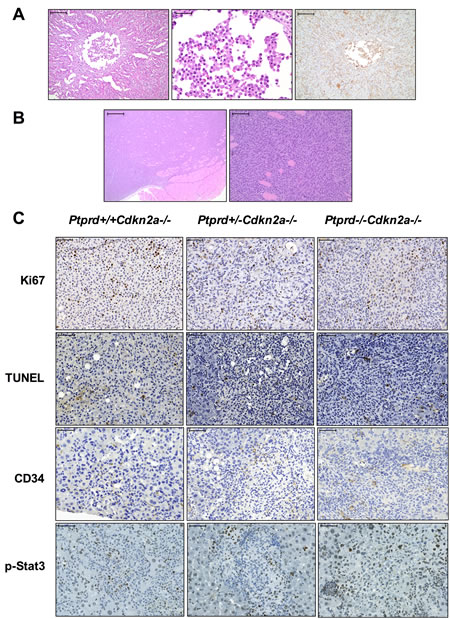 Our results highlight several important observations. First, we show that Ptprd loss promotes tumorigenesis in the setting of Cdkn2a deletion. Second, we show that heterozygous loss of Ptprd is sufficient to promote tumorigenesis. This is consistent with the hypothesis that the frequently observed heterozygous loss of PTPRD in human cancers contributes to tumor development. Third, our data suggests that loss of Ptprd plays a role in determining which types of tumors form.

Somatic loss of PTPRD has been associated with tumor risk and aggressiveness [4,11]. In addition, germ-line mutations of PTPRD are hypothesized to be involved in Ewing Sarcoma and glioblastoma [5,10]. We generated a mouse model with Ptprd and Cdkn2a loss in order to study the role of Ptprd in tumorigenesis. While mice with Ptprd loss alone did not show increased tumorigenesis, mice with Ptprd and Cdkn2a deletion had significantly shorter survival times than mice with Cdkn2a deletion alone. These results support the notion that there may be selective pressure for co-deletion of these two chromosome 9p tumor suppressors in human malignancies, and support a rationale for the patterns of PTPRD loss observed in human cancers. Although loss of Ptprd and Cdkn2a may be targeted in cancer, our data does not rule out the potential role of other tumor suppressors on chromosome 9p, including Cdkn2b.

In humans, loss of chromosome 9p occurs in B-cell lymphomas [26]. Intriguingly, in our study, mice with Ptprd loss developed more lymphomas. It has been shown that PTPRD is expressed in the B-cell lineage [27]. We speculate that the loss of Ptprd in our mice may alter B-cell biology, leading to of the development of lymphoma. It was also interesting that we observed a shift in the spectrum of sarcomas to a greater number of histiocytic sarcomas in Ptprd-/-Cdkn2a-/- mice. Histiocytes, or macrophages, are derived from circulating monocytes of bone marrow origin. Again, here, it would appear that Ptprd and Cdkn2a deletion increases the propensity of mice to develop tumors of hematopoietic origin.

In summary, we show that Ptprd copy number loss and Cdkn2a deletion cooperate to promote tumorigenesis. These findings have substantial implications for our understanding of a commonly inactivated tumor suppressor. Future studies will be needed to determine why Ptprd loss promotes tumorigenesis in some cell types but not others.

The frequency of PTPRD inactivation and the co-occurrence of PTPRD and CDKN2A deletion were identified using genomic data in the cBio Portal [28].

Ptprd heterozygous mice [15] were crossed to Cdkn2a knockout mice [16]. Mice were in a C57/Bl6 background. Mice were monitored twice a week and had complete necropsy performed if hunched, showing a swollen abdomen, or palpable lumps. Mice with Cdkn2a deletion were monitored until 52 weeks. Wild-type and mice with Ptprd loss alone were monitored for 104 weeks. Mice experiments were performed with MSKCC Institutional Animal Care and Use Committee approval.

We thank Armida Fabius and Sevin Turcan for helpful advice. We also thank Maria Jiao and Jacqueline Candelier of the MSKCC Comparative Pathology Core Facility, Dmitry Yarilin and Ke Xu of the MSKCC Molecular Cytology Core Facility, and the MSKCC Research Animal Resource Center for excellent technical assistance. This project was supported by grant numbers F31CA171566 (B.O.) and R01CA154767 (T.A.C.) from the National Institutes of Health. This work was also partially supported by grants from the Memorial Sloan Kettering Brain Tumor Center and the Molecular Cytology Core Facility grant P30CA008748. The content is solely the responsibility of the authors and does not necessarily represent the official views of the National Cancer Institute or the National Institutes of Health.