**These authors co-supervised this work

Cervical cancer is the second most common malignant tumor found in women worldwide accounting for 7.5% of all female cancer deaths [1]. The base excision repair (BER) pathway is responsible for repairing the DNA single-strand breaks caused by oxidative stress (such as reactive oxygen species, ROS), thereby maintaining genomic integrity. Impaired BER pathways are considered the major cause of cervical cancer [2]. However, it remains unknown whether the genetic polymorphisms of the key modulators in the BER pathway affect cervical cancer susceptibility.

The apurinic/apyrimidinic endonuclease 1 (APE1), adenosine diphosphate ribosyltransferase (ADPRT), human oxoguanine glycosylase1 (HOGG1) and X-ray cross complementing group 1 (XRCC1) are important regulators of the BER pathway. The abasic (AP) site aroused by DNA single-strand breaks can be recognized and excised by APE1. The association between APE1 rs1760944 (−656T>G) and rs1130409 (Asp148Glu) polymorphisms and the risk of renal cell carcinoma and breast cancer have been indicated in several case-control studies [3, 4]. HOGG1 removes 8-oxoG from the damaged DNA for further repair [5]. However, the HOGG1 (rs1052133) Ser genotype has failed to repair broken DNA and has been demonstrated to increase cancer susceptibility in the gallbladder cancer [6] and renal cell carcinoma [7]. Few studies have focused on the HOGG1 genetic variants and cervical cancer susceptibility. XRCC1 serves as the scaffold protein in the BER pathway, which recognizes DNA breaks and interacts with DNA polymerase β, DNA ligase III, and other components to repair Single-Strand Breaks (SSBs) [8]. Many studies have demonstrated that XRCC1 polymorphisms (i.e., rs1799782, Arg194Trp; rs25489, Arg280His; and rs25487, Arg399Gln) are associated with increased risk of cancer [9, 10]. The rs3213245 polymorphism located in the XRCC1 promoter is associated with the enhanced risk of breast and lung cancer [11, 12]. Moreover, rs3213245 (-77TC) alters the affinity of several transcription factors binding to the promoter, such as specificity protein 1 (Sp1) [13]. Sp1, which is one of the best-characterized transcriptional activators [14], plays a prominent role in cell-cycle development and regulation [15–18].

In the present study, case-control studies were conducted to analyze the association between the polymorphisms of BER components and the risk of cervical cancer in a Chinese population. Further, ChIP/Re-ChIP and IHC assays were also performed to evaluate the roles of these SNPs in cervical cancer.

Demographic and clinical characteristics of the study subjects

The clinical characteristics of the enrolled testing and validation cohorts were evaluated (Table 1). No significant differences in age distribution (P = 0.726) or abortion (P = 0.565) were detected between cases and controls in the testing cohort. However, more cases with higher parity (≥2) (41.7%) and premenopausal status (44.0%) were observed. Moreover, most of the cases with cervical cancer, have been diagnosed as squamous-cell carcinoma (94.2%) at the first stage of invasion (68.0%). The demographic and clinical characteristics of the subjects in the validation cohort were almost the same with those in the testing cohort (Table 1).

a Some cases lack information of selected variables.

b Other histological types, such as cervical choriocarcinoma.

Table 2: Association between genetic polymorphisms in the base excision repair genes and cervical cancer risk

aAdjusted for age, parity, and menopausal status in the logistic regression model.

aAdjusted for age, parity, and menopausal status in the logistic regression model.

The XRCC1 rs3213245 SNP was located at the −77 promoter site which was contained in the Sp1 binding motif according to the Alibaba2 Bioinformatics database (Figure 1C). It is here hypothesized that the genetic variant might alter the XRCC1 transcription factor affinity on the Sp1 binding site. In this case, the mechanisms of action were determined and the ability of Sp1 to bind to the −77 site with ChIP analysis was assessed. Finally, a total of 9 cervical cancer patients with three different combined genotypes was selected to perform the ChIP and Re-ChIP experiments. Results indicated that the rs3213245 C genotype dramatically promoted Sp1 binding to the XRCC1 promoter, but the TT genotype did not (Figure 1D). Inspired by the Alibaba2 Bioinformatics database, we then proposed that Krox-20, one transcription factor overlapped with Sp1, might be regulated by this SNP. The following in vivo ChIP assay further evaluated this hypothesis (Figure 1E). Thus, we speculated that Sp1 and Krox-20 might co-regulate the XRCC1 transcription. We next performed sequential ChIP (Re-ChIP) assay to verify this hypothesis. Interestingly, we found that the XRCC1 rs3213245 SNP might affect the binding ability of Sp1 and Krox-20 complex to the chromatin (Figure 1F-1G).

The siRNA knockdown experiments were then used to explore the manner of Sp1 and Krox-20 binding to the XRCC1 promoter region in HeLa (HPV18–positive), SiHa (HPV16–positive), and C–33A (HPV–negative) cells. We found that Sp1 might bind with the rs3213245 mutation region when transfected with negative control or Krox-20 siRNA, rather than Sp1 siRNA (Figure 2A, 2D, 2G). However, Krox-20 failed to bind with the rs3213245 mutation region when transfected with Sp1 siRNA (Figure 2B, 2E, 2H). The knockdown was confirmed by Western blot (Figure 2C, 2F and 2I). In addition, the XRCC1 mRNA level of cervical cancer patients was determined to verify the transcriptional regulation of XRCC1 by the Sp1-Krox-20 complex in vivo. The frequency distribution of CC, CT, and TT was 2, 18, and 20, respectively. Results showed that individuals with CT/TT genotypes at the rs3213245 had significantly lower XRCC1 levels than those with the CC genotype (Supplementary Figure 1). 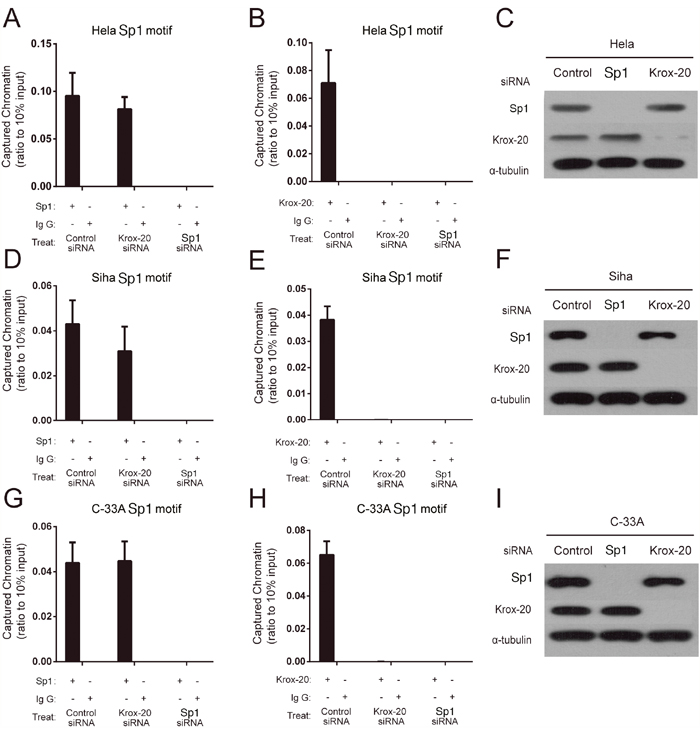 Figure 2: Sp1 regulated the transcription of the XRCC1 by recruiting Krox-20 to the rs3231245 mutation region. (A, B, D, E, G and H) Binding affinity of Sp1 and Krox-20 to chromatin. (C, F and I) Confirmation of protein expression of Sp1 and Krox-20 in siRNA-transfected cells by Western blot analysis.

Figure 3: Schematic model of the regulations among rs3213245 and XRCC1 involved in cervical cancer development. The transcription factor Krox-20 was recruited to the Sp1 binding motif. The rs3213245 C>T polymorphism may change the binding affinity of the transcription factor Sp1-Krox-20 complex to the mutation region, thereby regulating the expression of the XRCC1 gene and ultimately leads to cervical cancer development.

This study comprised two independent retrospective cohorts. The testing cohort involved 571 cervical cancer patients and 657 matched cancer-free controls recruited from the First Affiliated Hospital of Nanjing Medical University between January 2007 and December 2010. The subjects in the validation cohort were recruited from hospitals in Nantong City between January 2009 and August 2016. This group comprised 608 cervical cancer patients and 1165 matched cancer-free controls. All included cases were newly and histopathologically diagnosed with primary cervical cancer. None of the patients had received chemotherapy or radiotherapy prior to enrolment. Each of the subjects provided informed consent. The experimental procedures were authorized by the ethics review board of the Southeast University.

The functional genetic polymorphisms of the key components (i.e., HOGG1, XRCC1, ADPRT, and APE1) in the BER pathway were detected. The genomic DNA of the subjects in the testing cohort was extracted from the peripheral blood lymphocytes. The DNA of the validation cohort was extracted from the paraffin-embedded tissues. The polymorphisms of the selected genes were genotyped by the TaqMan allelic discrimination method by using the ABI 7900HT real-time PCR system (Applied Biosystems, CA, USA). The following primers were used to amplify the target fragments: rs1136410F5′-GACTGTAGGCCACCTCGATGTC-3′/R5′-AGTCTGTCTCATTCACCATGATACCT-3′, rs3213245F5′-TCTGGAGAGGCGCGACTG-3′/R5′-CAGAAGGATGAGGTAGAGTATGGG-3′, rs1799782F5′-GAGGATGAGAGCGCCAACTC-3′/R5′-TCACTCAGGACCCACGTTGTC-3′, rs 25489F5′-ATCTACTCTTTGTCTTCTCCAGTGC-3′/R5′-CTTCTCCTCGGGGTTTGCC-3′, rs25487F5′-AAGGAGTGGGTGCTGGACTGT-3′/R5′-CCAGCACAGGATAAGGAGCAG-3′, rs1760944F5′-AGCCTTCTCCACTGTTTTTTTCC/R5′-CAGCACATTGTGTGACACTGACTT-3′, rs1130409F5′-CCCGGCCTTCCTGATCAT-3′/R5′-CCCACCTCTTGATTGCTTTCC-3′, and rs1052133F5′-CCTCCTACAGGTGCTGTTCAGTG-3′/R5′-ACCCTTTCTGCGCTTTGCT-3′. Three positive control and negative control samples were used for the quality control of each amplification. At least 10% of the samples were randomly selected for further confirmation. The results were 100% concordant.

Tissues obtained from the cervical cancer patients were coated on 0.4 μm sections. IHC analysis was conducted as previously reported [23]. The sections were incubated with mouse XRCC1 (1:100 dilution, BOSTER) monoclonal antibodies incubated overnight at 4°C. XRCC1 staining in the sections was independently evaluated by two pathologists by using a semi-quantitative immunoreactivity score [24].

Human peripheral white blood cells from the cervical cancer patients were used for the ChIP and Re-ChIP analyses according to the standard protocol [26]. Briefly, the antibody against Sp1, Krox-20, or control IgG were immunoprecipitated with the chromatin fragments in ChIP assay. For re-ChIP, the samples were diluted 10 times with the dilution buffer and subjected to the ChIP procedure again after the elution of the first ChIP. The chromatin–Sp1complex was re-immunoprecipitated using anti-human Krox-20, whereas the chromatin–Krox-20 complex was re-immunoprecipitated using anti-human Sp1. Quantitative PCR was performed to analyze the precipitated genomic DNA using the following human XRCC1 rs3213245 (-77TC) promoter primers: 5′-AGGAAACGCTCGTTGCTAAG-3′ (forward) and 5′-TGGCCAGAAGGATGAGGTAG-3′ (reverse) for rs3213245.

The χ2 test was used to investigate the Hardy–Weinberg equilibrium of the controls’ genotype frequencies and the frequency distribution of the selected demographic variables and genotypes. Multivariate logistic regression was used to calculate the odds ratio values and 95% confidence interval. P < 0.05 was considered statistically significant.