Posttraumatic stress disorder (PTSD) is characterized by hypermnesia of the trauma with memory impairment. Avoidance, increased alertness, emotional numbing and re-experiencing of the trauma are its core symptoms. The rate of PTSD in individuals after experiencing threatening events such as intraoperative awareness is approximately 2–9% [1–2]. PTSD affects patients’ social and family life. We need to find effective treatments for PTSD, and it is a hotspot of medical research. There are currently no specific drugs for PTSD[3]. This study aimed to identify differences in lncRNA expression among the four groups and reveal a new mechanism to cure PTSD.

Long non-coding RNAs(LncRNAs) are a type of non-coding RNA that can regulate gene expression in many diseases, including schizophrenia and major depression [4]. Many of them have been confirmed to perform regulatory functions relevant to these disease processes [5]. However, the detailed mechanisms of PTSD in animal models remain unclear. Now, we explore the connection between lncRNAs and PTSD-like syndrome.

Compared with the control group, the samples frozen on day 7, day 14, and day 21 show significant Freezing enhancement (P < 0.05; Figure 1), which shows that the PTSD model is successful. 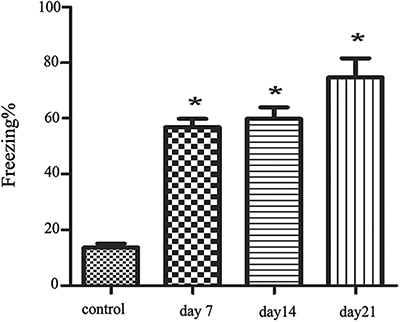 Figure 1: The freezing of the four group.

Using a second-generation lncRNA microarray, 948 lncRNAs and 2514 coding transcripts were detected (Table 1). These transcripts were carefully identified using the most authoritative databases, such as UCSC. The scatter-plot visualization method was used to assess the lncRNA and mRNA expression variation among the four groups of PTSD-like syndrome rat (Figure 2C and 2D). Hierarchical clustering shows the lncRNA and mRNA expression patterns of the samples (Figure 2A and 2B). 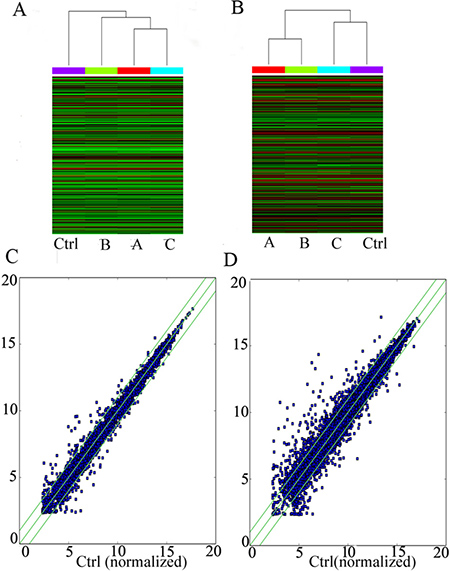 We performed pathway analysis by mapping genes to KEGG pathways (http://www.genome.jp/kegg/). In our study, we show 10 pathways that include coding genes associated with the lncRNAs involved in PTSD (Figure 3). The recommended P-value cut-off is 0.05. 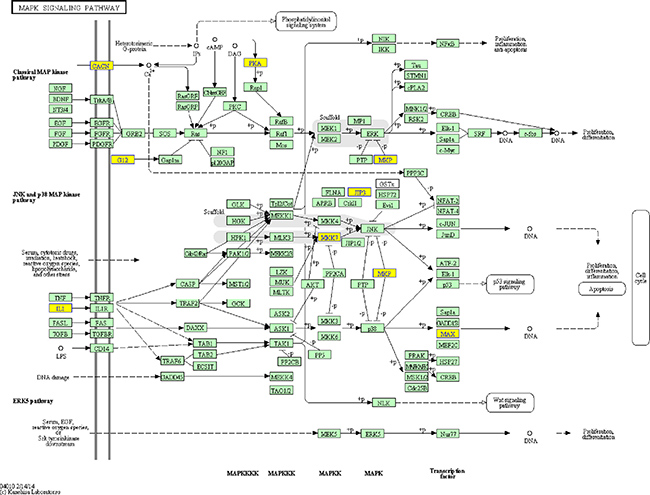 We selected 6 differentially expressed lncRNAs (EU056364, DQ473607, uc.279-, MRAK080143, MRuc008sut, MRAK159688) from the different samples for each group (Figure 5) to confirm the microarray profiling expression data. The results indicate that similar up-regulation or down-regulation was observed in both the microarray and RT-PCR samples for all 6 lncRNAs. Therefore, our microarray data were reliable and stable. 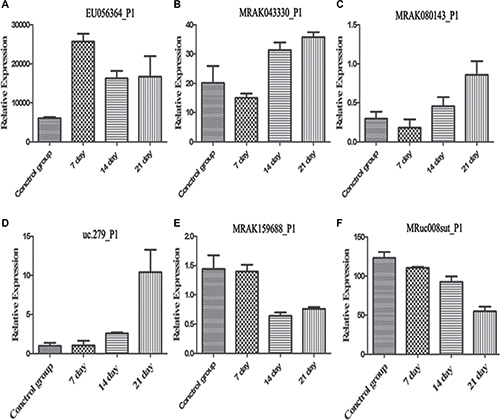 Our study reveals that many lncRNAs and mRNAs were significantly altered among the four PTSD-like syndrome groups. PTSD is a disorder that can occur upon exposure to an accident [7–10]. We used a second-generation lncRNA microarray to detect 394 up-regulated and 554 down-regulated lncRNAs in three PTSD-like syndrome groups compared to the control group (fold-change > 2.0). Different profiles of lncRNA and coding transcript expression were observed in PTSD-like syndrome rats at four time points and confirmed by RT-PCR, thus suggesting that numerous lncRNAs were involved in the development of PTSD-like syndrome conditions in rats.

Based on GO and KEGG Pathway analysis, many lncRNAs are closely related to the development of PTSD-like syndrome. The MAPK signalling pathways play important roles in PTSD, such as regulating synaptic plasticity and memory in the brain. There are three different families of MAPKs, namely ERK, p38-MAPK, and JNK-MAPK [11], with roles in stress response and memory [12, 13]. In mammals, the ERK/MAPK pathways are associated with memory tasks and participate in strengthening memory in the hippocampus [14].

Our results revealed that the gene associated with the lncRNA EU056364_P1 is CamkIIa. CaMKII plays a role in regulating synaptic plasticity and stimulates protein synthesis in the hippocampal neurons. It can regulate the early phase of LTP (long-term potentiation) [15] and participates in the course of LTP and fear-memory formation that underlies memory consolidation [16, 17, 18]. CaMKII [19, 20] is important in memory formation and extinction [21, 22].

In conclusion, our study provides an expression profile of lncRNAs in the development of PTSD, as well as a series of differentially expressed miRNAs at different time points. This study clarify that lncRNAs play an important role in PTSD development and provide a physiological basis for future study of PTSD.

The experiment satisfied the requirements of the National Institutes of Health Guide to the Care and Use of Laboratory Animals and the Ethics Committee of Jinling Hospital(Nanjing,Jiangsu,China;approval ID:SYXK-2012-0047).

Forty male adult Sprague-Dawley rats weighing 250-300 g were obtained from the Department of Laboratory Animal Science, Nanjing General Hospital of Nanjing Military Command. They were kept under a 12 h light-dark cycle with water and food pellets available ad libitum. The PTSD model was made as reported by Rau [6], and the hippocampus was collected afterward.

This experiment we adopted PTSD models as Rau [6] reported, Rats were used in this experiment. They were divided randomly into two groups. On day 1, animals were removed to context A (50 cm × 45 cm × 50 cm) and receive 0 or 15 shocks (1-mA, 1-s shocks with a variable intershock interval of 240–480 s,)Then the rats were removed from the chamber and placed in their home cages. On day 22, rats were given a single shock (1 mA, 1 s) 192 s after placement in context B (50 cm × 45 cm × 50 cm), and freezing for the 192s pre-shock period was assessed to provide a baseline prior to shock in context B. Freezing was defined as the absence of all movement except for respiration.

On 23 day, rats were returned to context B for 512 s for a test of fear conditioned higher than on 22 day’s that we can determine the rats appeared SEFL - PTSD.

The total RNA from each sample was quantified using a NanoDrop ND-1000, and the RNA integrity was assessed by agarose gel electrophoresis.

For microarray analysis, we used the Agilent Array platform version 5.7 to amplify and transcribe the total RNA from each sample into fluorescent cRNA. The labelled cRNAs were hybridized using the Rat LncRNA 4 x 44K Array v2.0. We scanned the arrays using the Agilent Scanner G2505C and used the GeneSpring GX v11.5.1 software package and Agilent Feature Extraction software (version 11.0.1.1) to analyse the acquired array images and perform data processing.

Based on the latest KEGG (Kyoto Encyclopedia of Genes and Genomes, http://www.genome.jp/kegg) database, we performed pathway analysis for differentially expressed mRNAs. This analysis allows users to determine biological pathways with a significant enrichment of differentially expressed mRNAs. The P-value denotes the significance of the pathway. The smaller the P-value, the more significant is the pathway. The P-value cut-off is 0.05.

GO analysis is a functional analysis associating differentially expressed mRNAs with GO categories. The GO categories are derived from Gene Ontology (http://www.geneontology.org), which comprises three structured networks of defined terms that describe gene product attributes. The P-value denotes the significance of GO term enrichment in the list of differentially expressed mRNAs. The smaller the P-value, the more significant is the GO term (P-value < = 0.05 recommended).

The cDNA was transcribed from 1 μg total RNA. Real-time PCR was performed using the SYBR green method. The PCR conditions included a denaturation step (95°C for 10 min) followed by 40 cycles of amplification and quantification (95°C for 15 s, 60°C for 1 min). The relative gene expression levels were quantified based on the cycle threshold (Ct) values and normalized to the reference gene GAPDH. The gene expression levels were calculated using the 2-ΔΔCt method.

All data were analysed using the SPSS 17.0 package (SPSS, Chicago, IL). The t-test and one-way or two-way analysis of variance (ANOVA) were used to analyse the expression levels of lncRNAs. P < 0.05 was considered significant.

This work was supported by a Young Scholar Research Grant from the Chinese Anaesthesiologist Association (220150800010) and the National Natural Science Foundation of China (81501239).

3. Institute of Medicine (IOM). Treatment of posttraumatic stress disorder: An assessment of the evidence. Washington, DC: The National Academies Press. 2008.