Recently, TMZ was found to upregulate miRNA-21 in cardiomyocytes and mitigate myocardial ischemia/reperfusion injury [9]. We inferred that the same mechanisms may play a role in the protective effects of TMZ in PMI. In this study, patients with unstable angina pectoris (UAP) were administered TMZ before PCI. Post-PCI expression levels of miRNA-21 and the target gene PDCD4 were assessed in CD4+ T lymphocytes. Serum levels of cytokines (including IL-10, TNF-α, and high-sensitivity C-reactive protein (hs-CRP)) and cardiac markers of myocardial necrosis (including creatine kinase-MB (CK-MB) and cardiac troponin I (cTnI)) were also evaluated. This study may help clarify the cardioprotective mechanisms of TMZ during the periprocedural period, and provide a new approach for preventing and treating coronary artery diseases as well as PMI.

The TMZ group was not significantly different from the control group in terms of age, sex, smoking status, diabetes mellitus, dyslipidemia, hypertension, history of cardiovascular disease, and medication use (all P>0.05). The two groups were comparable in terms of coronary lesion location, stenosis severity, stenosis number, and stent number (all P>0.05) (Tables 1 and 2).

Values are number of patients with percentage in parentheses, or mean ± SD; TIMI = thrombolysis in myocardial infarction; NS = Not significant.

Baseline serum CK-MB and cTnI levels were normal and not significantly different between the TMZ and control groups. Compared with the control group, the TMZ group had a significantly lower proportion of patients with post-PCI cTnI (38.2% vs. 70.4%, P<0.05) and CK-MB (18.7% vs. 44.2%, P<0.05) levels higher than the reference values at 16-24 h. 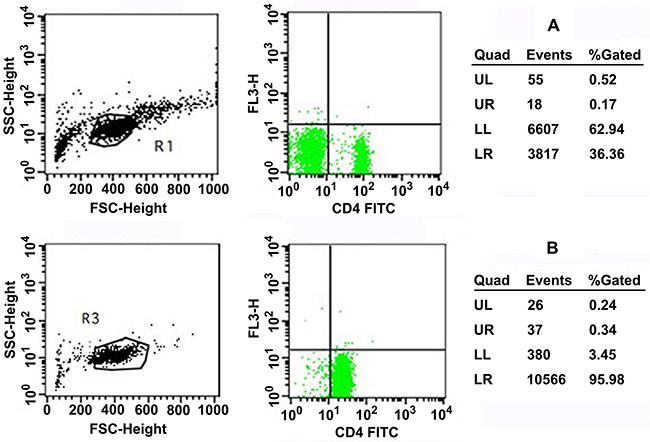 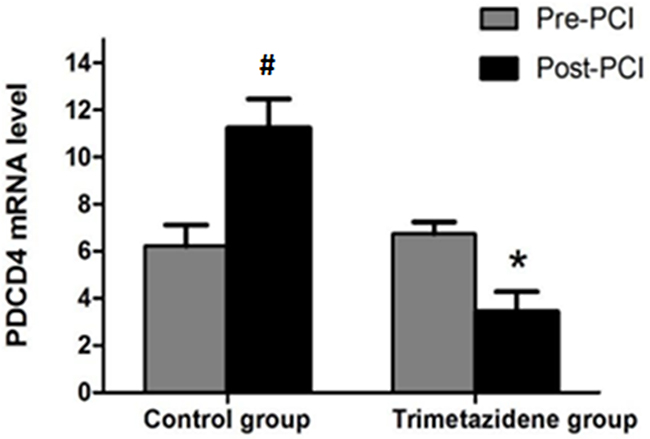 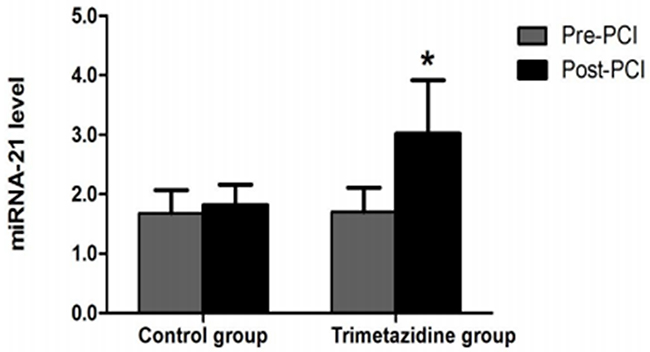 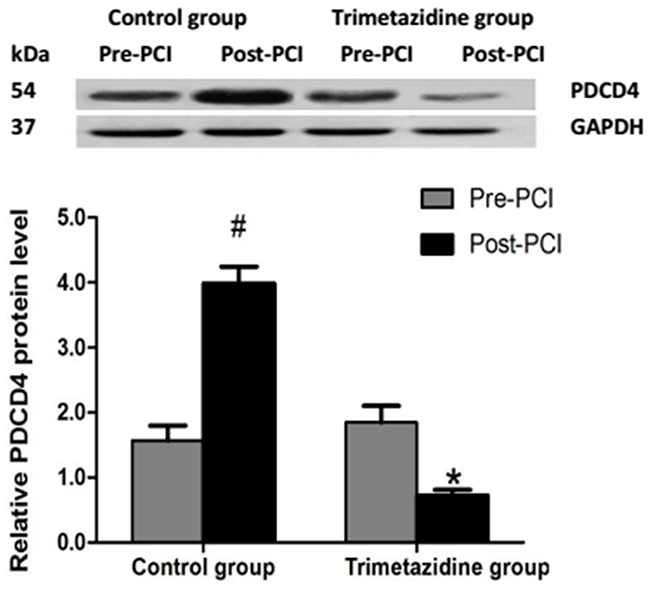 PMI is a common complication of elective PCI, occurring in 30-70% of cases, as indicated by elevated CK-MB or cTnI levels [10]. Previous studies demonstrated that PMI significantly increases long- and short-term cardiovascular adverse events and leads to unfavorable prognosis. Meanwhile, the severity of PCI-induced myocardial injury is highly correlated with the incidence of long-term cardiovascular adverse events [11, 12]. As shown above, serum CK-MB and cTnI levels were elevated post-PCI, accompanied by changes of hs-CRP, TNF-α, and IL-10 amounts, indicating that the inflammatory response likely plays a role in PMI. Pre-PCI oral administration of TMZ may significantly improve PMI by reducing serum hs-CRP and TNF-α levels and elevating IL-10 amounts. TNF-α is an important pro-inflammatory cytokine that suppresses cardiac contractility and activates neutrophils. It stimulates neutrophils and endothelial cells to excessively express adhesion molecules, leading to tissue neutrophil accumulation and subsequent tissue impairment [13]. IL-10 is an anti-inflammatory cytokine secreted by Th2 cells. Derkacz et al. [14] reported that elevated serum IL-10 levels is associated with reduced incidence of PMI. Our results demonstrated that TMZ may alleviate PMI through its anti-inflammatory effects.

Limitations: Clinically important endpoints, such as death, myocardial infarction, and revascularization rate, were not recorded. In future studies, more clinically relevant endpoints will be considered. PDCD4 may be a downstream target of other factors (e.g., TGF-β, IL-2, IL-15, IL-12, etc.) [21, 22], but the present study did not examine all these factors that may be associated with periprocedural myocardial injury. On the other hand, miRNA-21 levels were only increased in the TMZ group and this suggests that the increase in miRNA-21 could be induced by TMZ. Additional studies are necessary to examine these factors. Furthermore, no mechanistic studies could be made in the present preliminary study. Finally, large-scale randomized controlled trials are warranted to validate these findings.

From February 2011 to July 2015, 252 patients with UAP (193 males and 59 females) were randomized to the TMZ (20 mg tid TMZ, for 3 days before PCI, n=128) and control (no TMZ, n=124) groups, according to a random number table. All patients with UAP had coronary stenosis confirmed by coronary angiography, and had indications for PCI. Cardiac makers (CK-MB and cTnI) were negative in these patients at baseline. No patients had contraindications to statins. All patients had either new-onset angina, worsening effort angina, or resting angina. The exclusion criteria were: 1) severe infections or tumors; 2) severe liver or renal dysfunction; 3) allergy to TMZ; 4) stroke; 5) left ventricular ejection fraction <30%; or 6) emergency PCI. The study protocol complied with the human trial regulations developed by the Institutional Review Board of Guangxi Medical University. Written informed consent was obtained from all participants.

Peripheral venous blood (20 ml) was drawn before PCI and at 16-24 h after PCI (mean of 20 h in both groups, P>0.05). One ml of blood was kept at room temperature for 20 min and centrifuged at 2000 rpm for 10 min; the resulting serum was assessed for CK-MB, cTnI, and hs-CRP levels. Serum TNF-α and IL-10 levels were measured with specific ELISA detection kits (eBioscience, USA), according to the manufacturer’s instructions. The remaining 19 ml of peripheral venous blood were added with heparin for cell isolation.

Peripheral blood mononuclear cells (PBMCs) were isolated by Ficoll-Paque density gradient centrifugation. PBMCs were then resuspended in 1 ml of RPMI 1640 culture medium (Hyclone, USA), and 10 μl of PBMC suspension were added to 90 μl of phosphate-buffered saline for cell counting. The remaining PBMCs were sorted for CD4+ T lymphocytes, according to the instructions of the Dynabeads FlowComp Human CD4 kit (Dynal, Norway). Briefly, the beads were first washed according to the manufacturer’s protocol. Then, 500 μL of cells were added with 25 μL of the FlowComp Human CD4 antibody, mixed well, and incubated 10 min at 4°C. The cells were washed with 2 mL of isolation buffer and centrifuged at 350 g. The supernatant was discarded and 75 μL of FlowComp Dynabeads were added. The cells were incubated at room temperature for 15 min under gentle agitation. One mL of isolation buffer was added, mixed for 2-3 s, and the tube was placed in a magnet for 2 min. The supernatant was discarded with the tube still in the magnet. Washing was repeated twice. The cells were released using the release buffer and the beads were caught using the magnet. The supernatant containing the bead-free cells was transferred to a new tube. Stained cells were analyzed on a FACScan flow cytometer (BD Biosciences, USA) with a 488-nm argon laser and Cell Quest 3.1 software (BD Biosciences, USA). Lymphocytes were gated by forward scatter (FSC) and side scatter (SSC). The sorted lymphocytes were counted. Cell viability was evaluated by 0.4% Trypan blue staining. CD4+ T lymphocytes with cell viability >90% were used for the subsequent experiments.

Sorted CD4+ T lymphocytes were treated with 100 μl of protein lysis buffer and centrifuged at 12,000 r/min for 20 min at 4°C. Supernatants were transferred to clean centrifuge tubes and tested for protein concentration using the bicinchoninic acid assay, with GAPDH as internal control (Beyotime Institute of Biotechnology, China). Equal amounts of protein were separated by 12% sodium dodecyl sulphate polyacrylamide gel electrophoresis (SDS-PAGE) with 5% stacking gel, and transferred onto PVDF membranes by the semi-dry method for 40 min. The membranes were blocked in Tris-buffered saline-Tween containing 5% skimmed milk for 1 h, and incubated with the primary antibody (PDCD4, Abcam, USA; 1:2500) at 4°C overnight. After five washes of 5 min with TBST, the samples were incubated with 1:5000 infrared fluorescent secondary antibody (LI-COR, USA) at room temperature for 2 h. The membrane was then scanned on an Odyssey double-color infrared laser imaging system.

The authors confirm that the content of this paper has no conflicts of interest.